A different way to locate the bridge on a flat-top

One of my students arrived early for his lesson, so I showed him the project on my workbench. I was just at the point of measuring where to put the bridge on an old department-store guitar which I was converting from tailpiece to pin-bridge. I explained why this is critical for intonation, and that you only get one chance on a flat-top, unlike an archtop.
John (my student) is a carpenter, and enjoys solving problems, as I have seen in his guitar lessons. With only a moment's thought, he suggested the set-up show in this photo, and asked, "Would that work?" I said, "I can't see why it wouldn't work." We then had the conversation about how, if this is a good way of doing it, someone else must have already thought of it.
So, I used this method to locate the bridge, glued it in place, did all that other silly stuff involving a nut and saddle and strung it up. It intonates perfectly.
My question: did John and I re-invent a wheel? Or did a carpenter and a VERY inexperienced luthier come up with something new and useful?

I won't say it is main stream but I have seen this technique used exactly as you used it, fitting a pin bridge to an old guitar that had a tail piece. I also knew about a repairman "back home" that used a tail piece tied or looped around the end pin to reposition replacement bridges all the time. He's the only one that I've ever heard of that used it habitually and I haven't heard of any builders that use a tail piece in this manner on a new build. 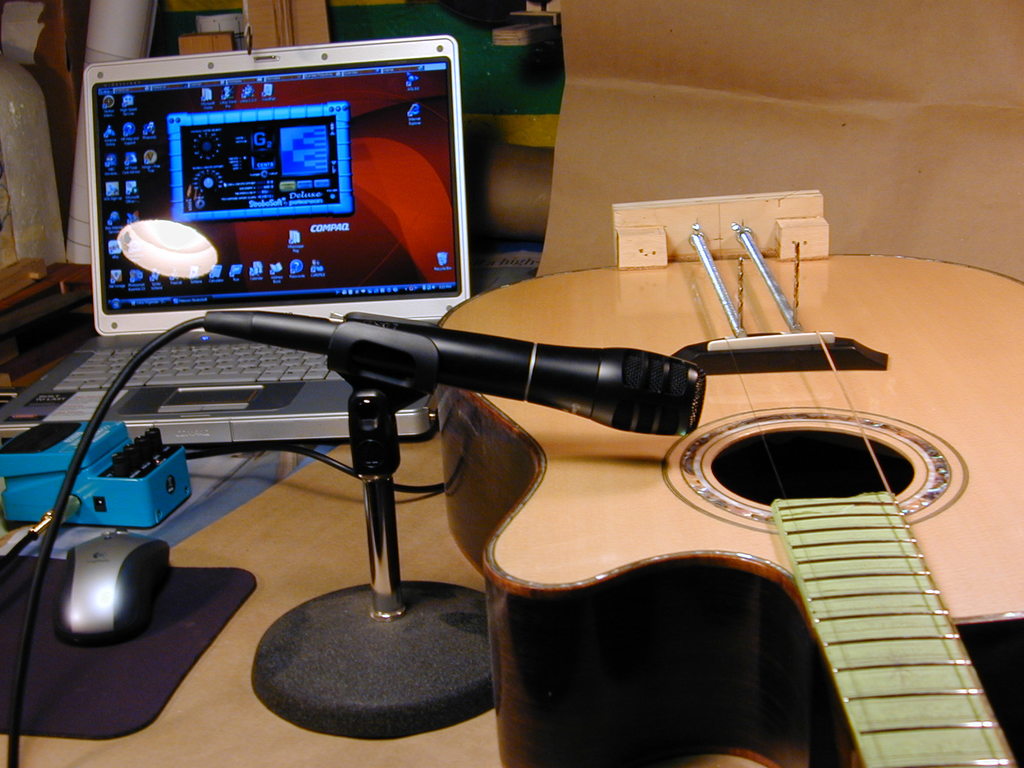 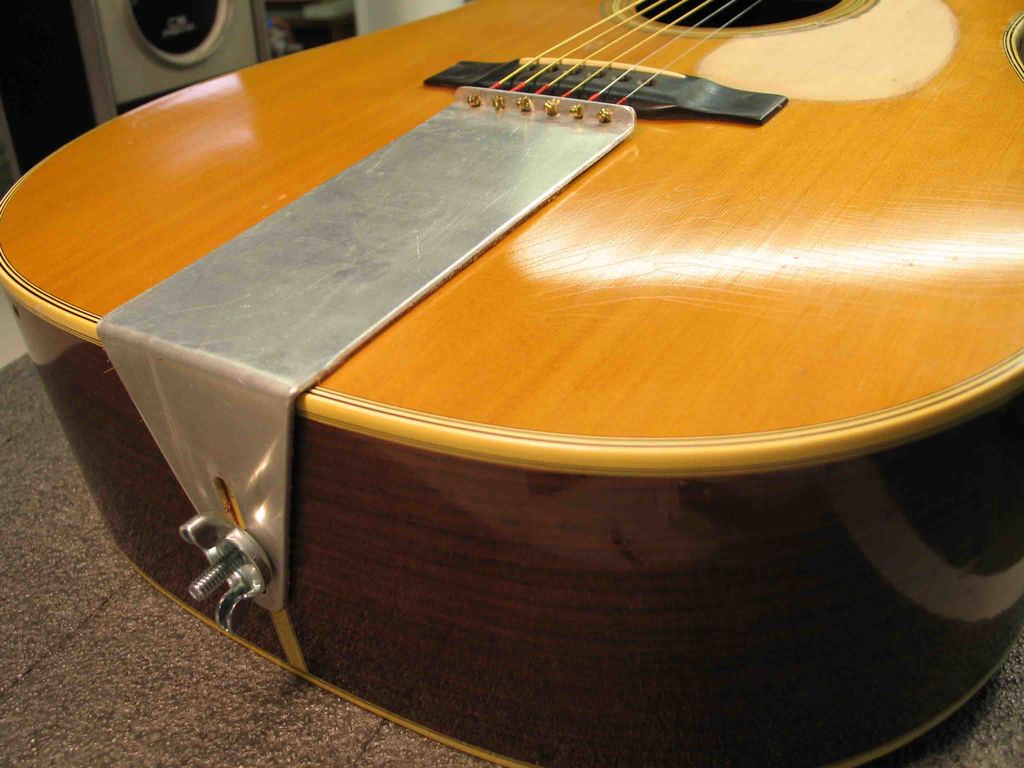 I made this a while back to find the correct location of 70's Martin mis-placed bridges. The bent Aluminum is cork lined where it touches the guitar. The string holes are drilled at a 16" radius. Pop the end pin and bolt the contraption on through the hole, works great. The guitar pictured is a 72 D-35, he bridge was off by an 1/8 of an inch.

Permalink Reply by Donald A. Fortune on June 18, 2010 at 9:43am
Nice looking rig Paul, do you mind if I copy it and have one for my very own??
And Rick - thanx for posting a thing that I have had my problems with in the past and the idea looks to be fool proof.
Peace, Donald

Permalink Reply by Rick Homan on June 18, 2010 at 10:06am
Thanks for the pics of your rigs! Not only is it done, it is done better! I just hadn't seen or heard of it before; that's not surprising considering I have been at this as a hobby for only the past three years.

The trick to using this jig successfully is to set the string action height, relief, ect. exactly where you will eventually set it after the bridge is glued down and under string tension. This will eliminate any differences that might occur from the top pulling up and rotating slightly after the bridge is glued down and under full string tension. The saddle height will most likely need to be lowered a touch from the set up with the jig to the final set up with the installed bridge because of this.

Permalink Reply by Russell Vance on June 18, 2010 at 4:13pm
Neat huh, and the penny drops for a goodly percentage of us using a rule and best guess fiddle factor....with our electrics we have a problem with bridge location due to the large variance in string gauge and action height required by individual players - along with the requirement to drop tune.

Tune-o-matic bridges are always a pain as they have limited intonation range and often just plain run out of adjustment which is a problem with highly amplified instruments playing all the fifths and doubled octaves. They 'beat' themselves to death and sound muddy if the octaves aren't spot on.

When we build we do exactly what Rick does with the T-o-M bridge on a wooden plinth (no studs , it just rests on a wooden plinth , thicknessed to give the correct action height) and using a strobe we locate the bridge relative to scale length and also bass displacement versus treble displacement (bridge tilt relative to the longitudinal axis) We do this with just the high e and low e string (with the players choice of string gauge) and when its spot on with a little adjustment available both ways we locate it to align the stings with the neck edges and the locate the pickups so the poles are centerd and then drill all the pilot holes.
Obviously, and I forgot to mention - the stop tail is already installed - but given what some of my colleagues have shown here, a simple set up trapeze would be a useful addition to our rig and allow the positioning to be just so. Thanks guys, R.

Permalink Reply by Donald A. Fortune on June 19, 2010 at 4:56am
Thanx Paul - I always ask before I copy something-- I put the design on the drawing board and came up with different string spacings, so I can use it for multiple settings.. once again thanx...
Peace, Donald

Permalink Reply by Paul Breen on June 19, 2010 at 8:35am
No sweat Donald, post a picture of your solution when it's done.

Permalink Reply by Donald A. Fortune on June 20, 2010 at 5:02am
will do Paul just need to do the thing-- thanx again
Peace, Donald