I've been asked to repair an Epiphone Thunderbird Bass for a local music store.  It's a Chinese made bass with a Gibson Nashville name on the Epiphone bolt on neck plate.  It has major neck issues and upon closer inspection had a really bad repair previously.  The nut was poorly replaced and shimmed with 4 layers of maple veneer, the fingerboard had been broken lose up to about the 5th fret, glued with titebond or a similar glue and had several Maple shims under the fingerboard going up at least past the second fret.  The neck had a radical back bow as a result. 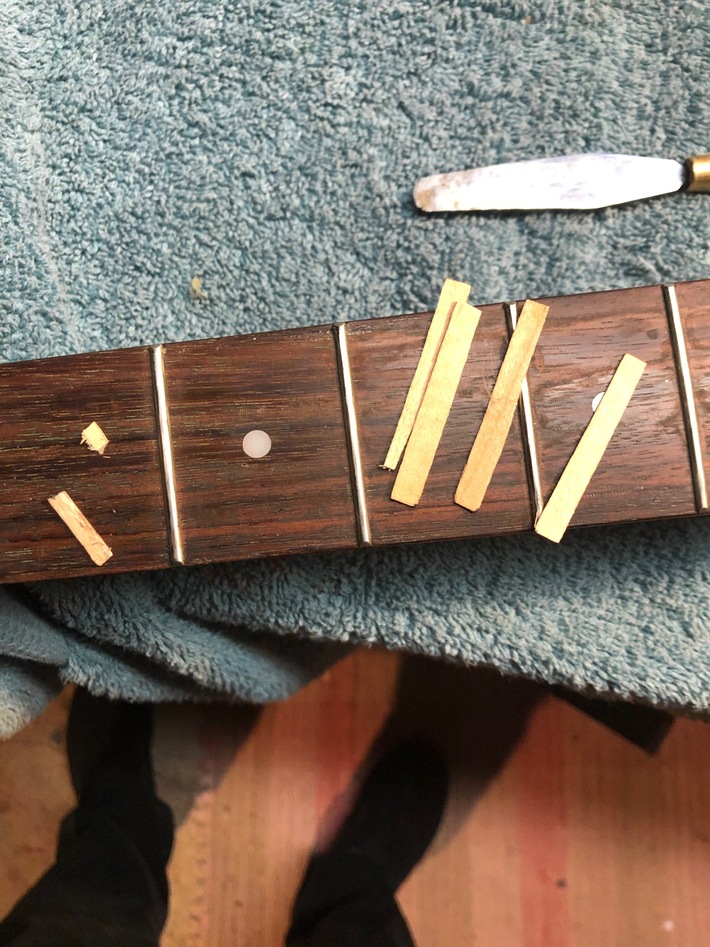 I loosened the badly glued fingerboard up to about the second fret, which released the back bow somewhat, but noticed that I couldn't find a way to adjust the truss rod.  It's bolt on neck so I removed it as well in case it had an adjustment on the body end of the neck like a Fender might have, but it didn't. 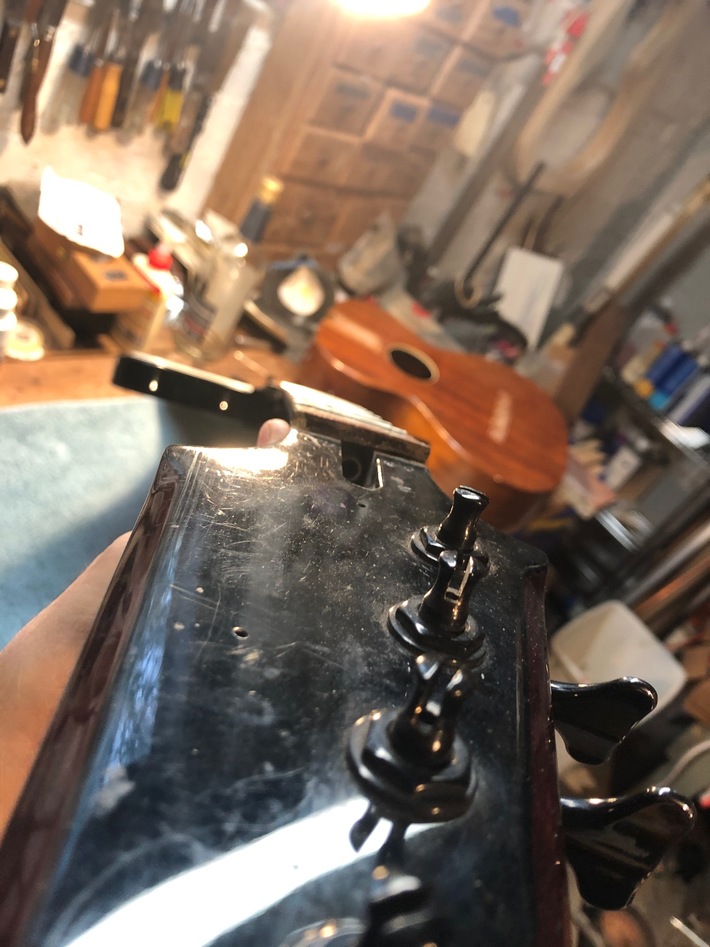 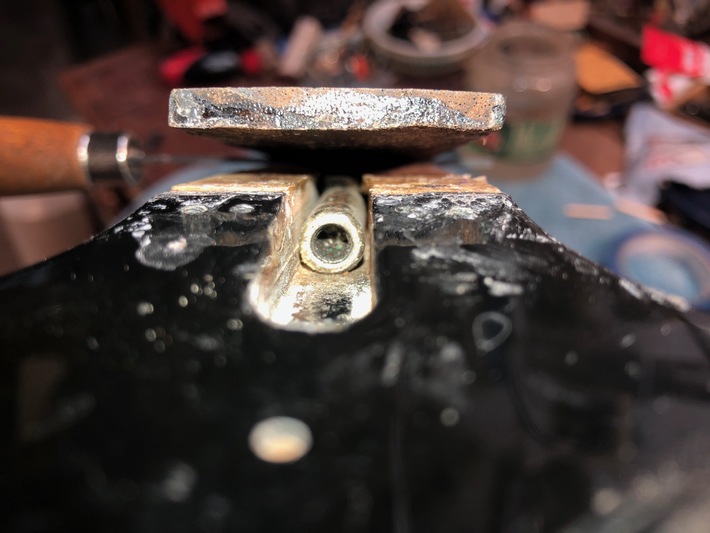 There is a round cylinder on the end, but no room or flat edges where an adjustment wrench could fit on and no way to adjust the threaded rod, buried deep inside the cylinder. Past the cylinder, the truss rod appears to be square and covered in a black plastic wrap. My conclusion is the the end of the truss rod had broken off and that I'll need to replace it.  This is a new step for me, but the bass is worthless right now and I've offered to try this with the understanding that I won't charge the music store for the job if it doesn't work. A perfect time to try out this procedure!

With that in mind, I hope the forum will give me advice and feedback as I go along and help"keep me out of the ditches" as we used to say in my old road musician days!

I'm assuming the first stepwise be to drill 2 small pin holes in the fingerboard as location points for later re-assembly.  I have not seen similar neck rod assembly on Stu Mac or Luther's Mercantile websites, but found this on a quick google search that looks similar. Of course, I won't know for sure until I open things up. If I'm correct about the trussed style, the longer cylinder has sheared off leaving only the shorter cylinder with the broken end of the truss rod inside.  So my proposed plan is to remove the fingerboard, replace the truss rod, then re-assemble. This is all new territory for me and any suggestions folks can make on how to proceed will be graciously and gratefully accepted. I'm somewhat concerned about how much back bow the neck seems to have in the sections I have loosened so far. You can see this in the close up of the truss rod end.  The fingerboard is now essentially flat and the neck bows backward as you can see.  I anticipate there may be other surprises awaiting me as well.  If I get the neck corrected, I'll cut a new nut and work on set up and action.

I would consider myself an early journeyman repairman.  I usually re-build and repair vintage acoustics and can do most anything from neck re-sets to french polishing finish but I thought this would be worthy of my time and efforts and give me a chance to grow my skill set.  Thanks in advance of any support you can share!

Thanks very much, Carl.  Yes indeed, this again proves to be a "problem child"!  The overall length of this rod is about 22 1/2", an oddball size. I see a lot of 24" rods and LMI will custom make one, but Bitteroot seems to have the right size.  I'll give them a call and see what their thought are.

Hi Carl, Thanks again for the tip.  I just got off the phone with Bitteroot Guitars and delighted to say that they had exactly what I needed.

The guy I was talking to actually knew which builder in China made the original rod and was able to give me detailed tips on installing the replacement. All in all, an excellent experience!  I'll be doing business with them again!

I'm glad to say I've finished up the bass and as Paul Harvey used to say, "Let me tell you ... the rest of the story."

The truss rod arrived from Bitterroot guitars and, as described, was 2 1/2 inches shorter that the original. I had to fill the extra space in the slot and repair a bit of tear out before installing the rod. I filled the remaining space in thew slot with 2 layers of mahogany veneer, then glued the fingerboard back making use of the 2 pilot holes I had drilled earlier.  I used rubber band strips to clamp the neck and fingerboard. 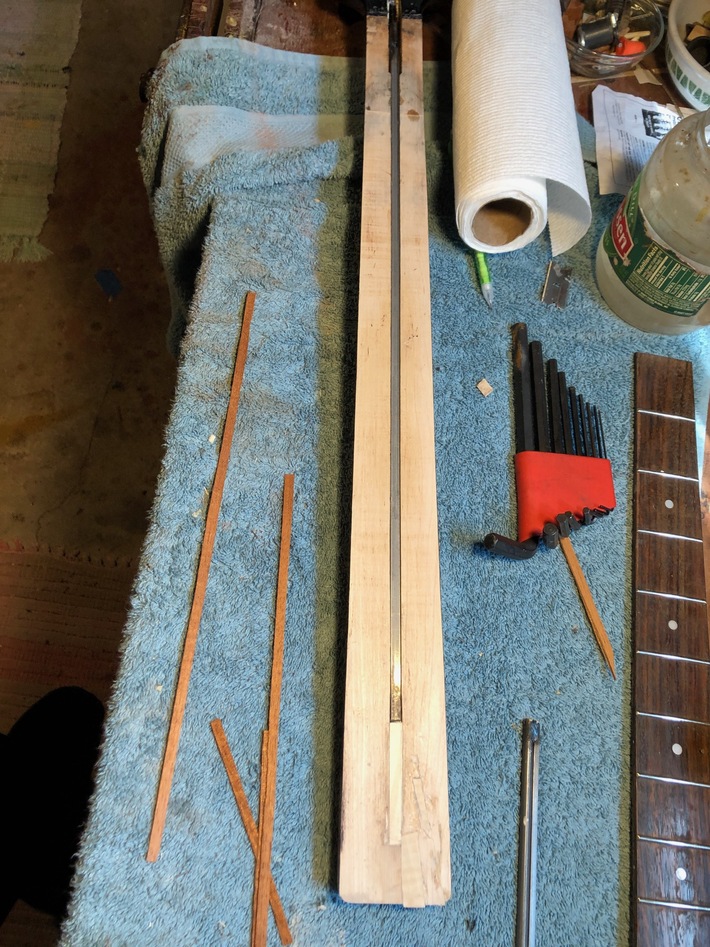 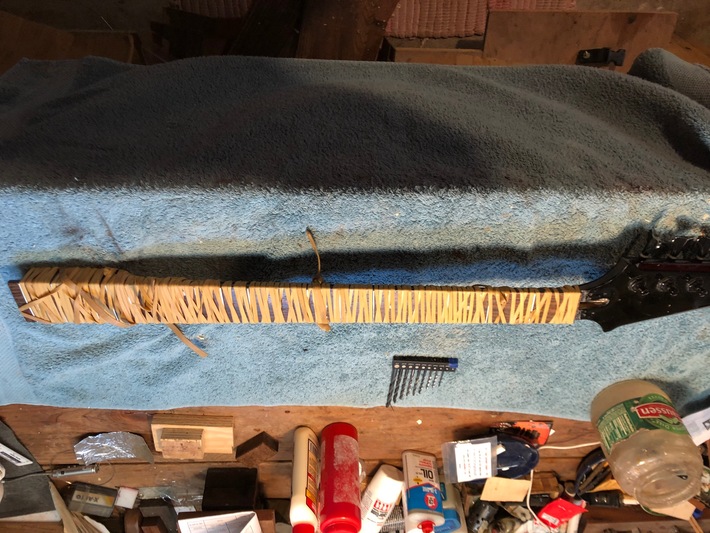 After drying overnight, I removed the excess squeeze out and shaved the glue joints to even them up. I colored and drop filled damaged finish from the first repair and the fingerboard removal. 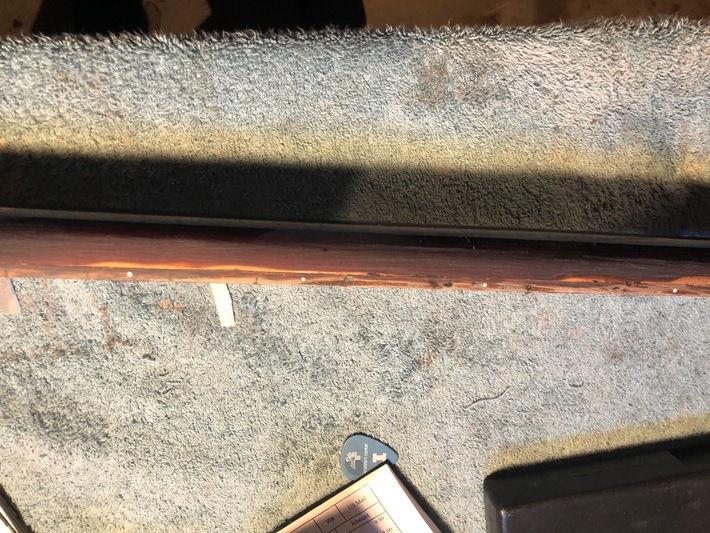 The neck was given a final french polish overcoat to blend in the repair. 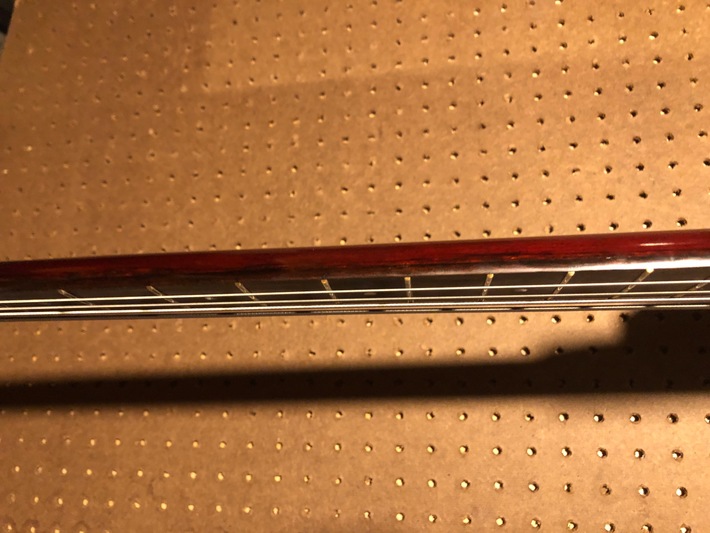 Getting the color right is always my biggest challenge.  I used a touch up lacquer pen then over coated with garnet shellac.   If this had been a paying repair, I would have take more care with that. Once the neck was back as it should have been, I removed the 2 cardboard shims under the neck and re-bolted it in it's original position.  I had to cut a new bone nut and re-set the bridge which had been raised to an extreme angle, but once everything was set up correctly and the bass was intonated, it played quite nicely.   It did throw me one last insult, though, when I strung it up, the A string tuner was broken.  Another is on the way. All in all, this project was a challenge, but it worked out great.  The instrument is back in use and playing well and I learned a ton in the process.  My next project will be to figure out a routing jig to cut slots for carbon fibre rods in vintage guitar necks!

Hi Chris, glad to see you got that job done. The next one will be easier, and you can charge for it.

Also, I think it's great when somebody gets help from different contributors and then comes back and shows the outcome, thanks for that. Often, on other forums, somebody will get a number of suggestions all seem doable, but the person never comes back to show which path they took.

Here is a way I did some necks in the past that may help you design something for yourself. Somebody had put a rod in this neck and it did not work. I had to remove it and re-route for a rod I made myself. Worked fine. 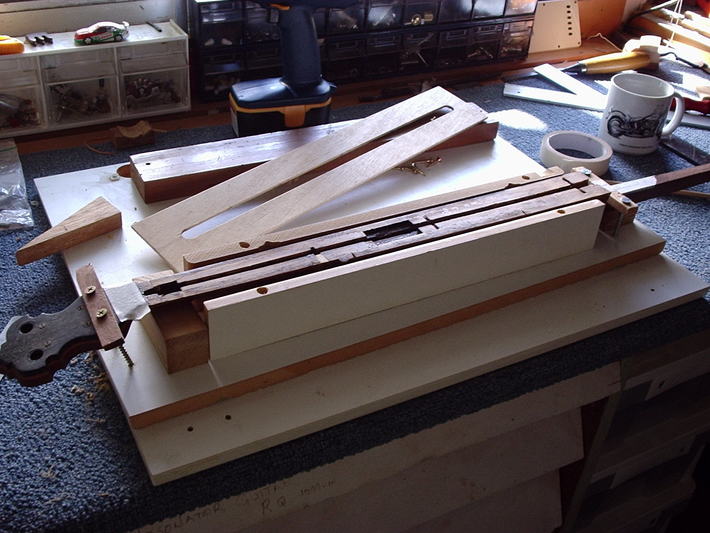 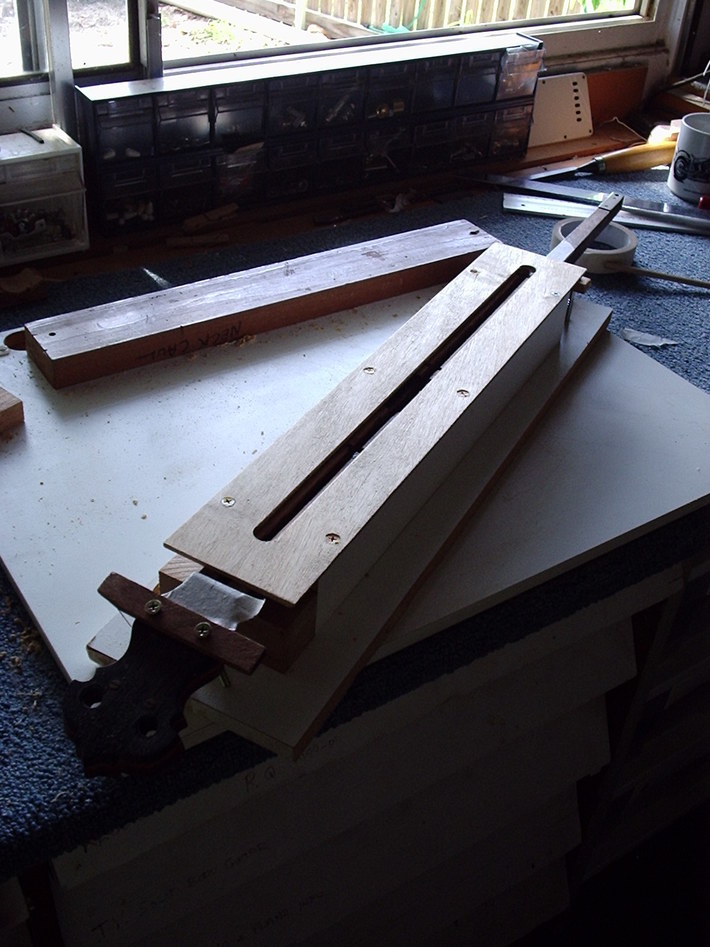 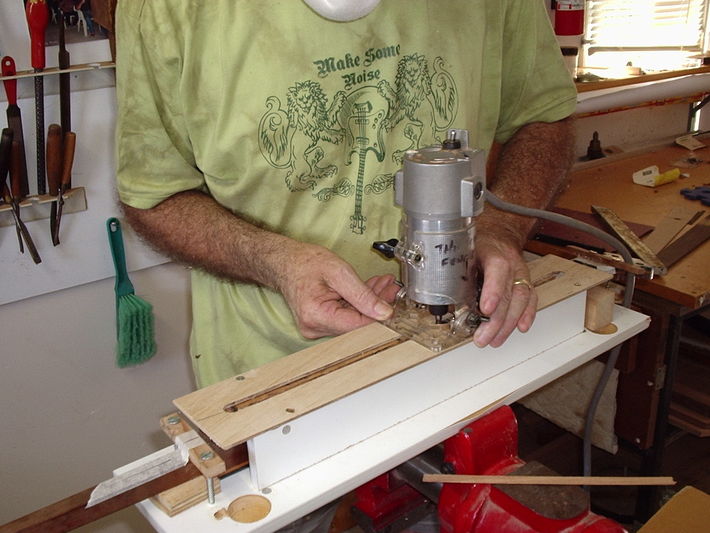 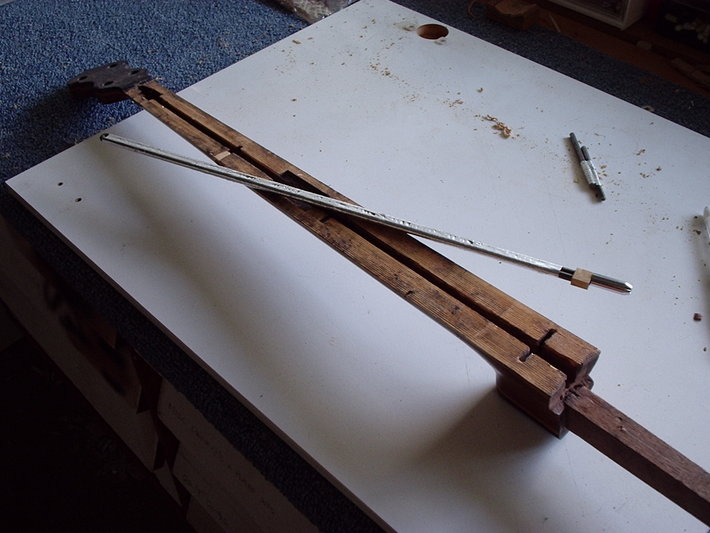 Thanks Taffy!  Love the pics.  I'll be studying on those for sure.

Just a quick follow up for Taffy.  Based on your pics and the Dan Erlewine video, I created a very rough set up of routing jigs and tried my first Carbon Rod inserts.   As always, I learned a lot.  This one has more than few blemishes, but I epoxied the rods in place so it would fill any gaps and make up for my shortcomings.  I also learned the value of setting the jig to control the router from both sides!

Thanks for the advice! Hi Chris, "more than one way to skin a cat", as the saying goes. Well done, glad to help.