I had a 20s Stromberg/Voisinet that needed both front and back stripped and relacquered. I used drywall mud dyed black, and since I was new to doing this ( THAT is my excuse) I really thought I had done a great job. I even did a photoessay of it that I Facebooked.

Well, after the second coat of lacquer,it became obvious that it was not so great a job. I don't know if it was because I should have done all the grain filling process twice or not, and I only did it a single time.

I really thought it was going to turn out way better than this, and I am super disappointed. 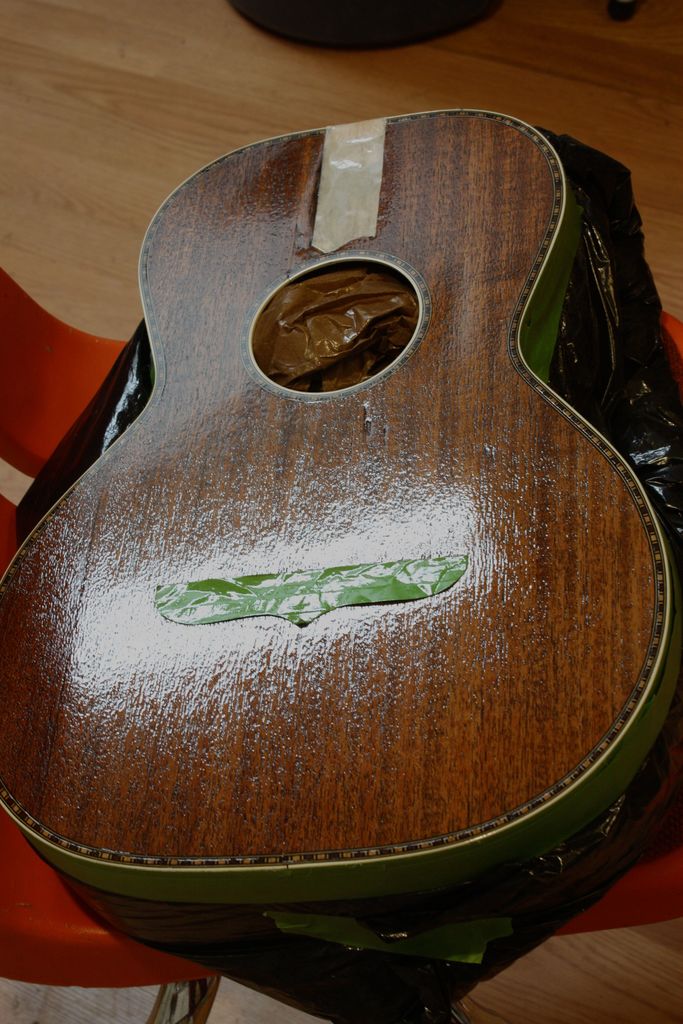 With hog, you will probably end up with three or four sessions of filling. This means applying, letting it dry for a bit, wiping off cross grain, letting it dry and sanding it back X 4. It's surprising how much the filler will shrink back after it is dry.

If your topcoats are nitro you should be able to block sand the nitro back and start applying your filler again, once the lacquer has cured for a while, otherwise you could strip it and start over.

Regardless of what we use to fill pores sometimes it's a bit of a pain to get the stuff to stay in the pores.  DW mud is no different but after having tried it on some test pieces I decided to not use it on an instrument.

I prefer epoxy finishing resin and here is a bit of a toot I once put together to show how I use it:  epoxy pore filling

One thing that took me a while to learn is that the "squeegee" action does not underscore that you really have to "mash and press" the stuff in the pores.  I've also learned that since epoxy sticks very well to epoxy these days I get better results, fewer sessions, doing the first session with straight epoxy finishing resin and then thickening the stuff a bit for the second session.  The fist session tends so get in the bottom of the pores and provide a sticky base layer for the second session.

Hope something here is helpful to you.

I dunno - hard to tell from the photo, but things don't look so bad to me.  Lots of grain filling is done with the finish itself - and one main reason it's not part of the literature is that filling with finish requires extended drying time to be successful.  I'm not often in a hurry, so when I use pore filler, I don't worry if the first spray  coat (s) of lacquer finish sink in.

I just level and proceed, repeating until it's not an issue.  Have to be careful not to build up massive thickness, and to level without going through to the wood.  Sometimes my first block sanding after a couple of coats will be with pretty coarse abrasive paper - 180 or so - because those sanding scratches will get filled more easily than the pores.

Where Martin allows days for drying lacquer, I allow weeks. . .

Frank et al', thanks for that. I never would have considered levelling with that grit. I will do that and post pics later.

What I did not say was this is the 6th coat.

I am certainly not in a hurry either, and there are plenty of other jobs yet to be done on it. The neck has yet to be attached (bolt on conversion, mostly because I am a hack,,,) and fingerboard work under the MOTS , AND making a bridge from scratch also, though I have a homemade StewMac jig and also a pantograph machine also that has never been used. I have  folks contact me year after year for parts for my KayKraft obsession, and never make them, though I have the tools.

I build the jigs, then am too scared to try them out, as the learning curve is just a bit over the top for me.

That's my method (FF) except I use a nice brush,can o'varnish(Behlen) and always apply 1st coat against the grain which immediately begins to seep into pores and as many as necessary after ...very effective on mahog. Spraying is too involved/risky for my liking.

It's the waiting that kills me. I really hate waiting for lacquer to shrink but it's part of the process. I have used french polished shellac to fill mahogany grain too but it's not fast either and I've only used it on smaller instruments. I like using french polish shellac but using it to fill grain on something larger than a mandolin or ukulele is more work that I want to put in to it. 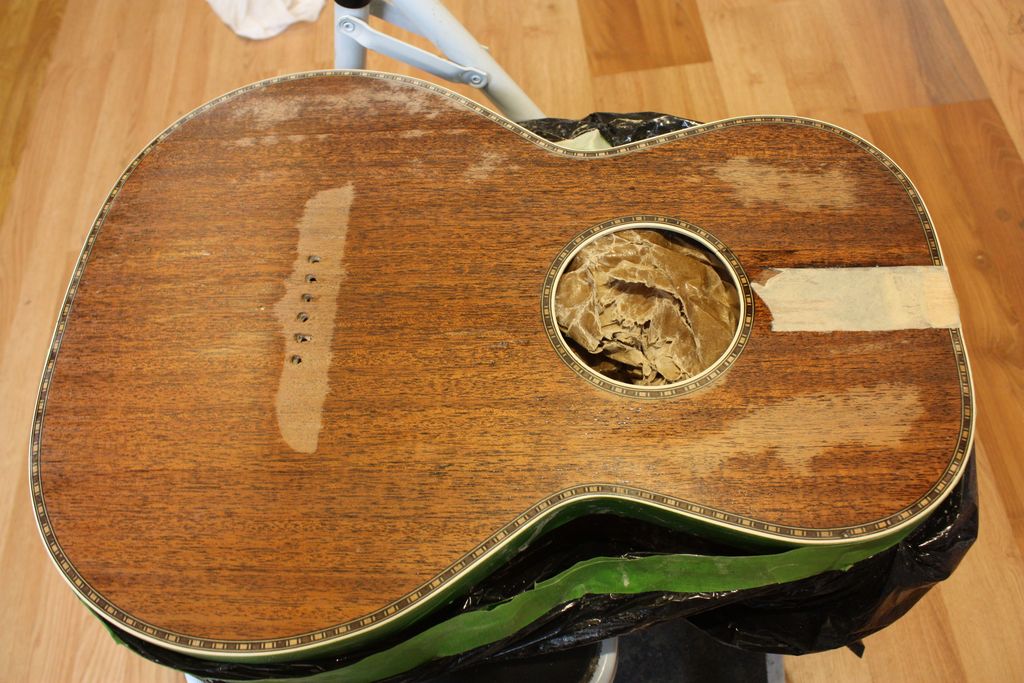 Sorry, Kerry, but I had to laugh... having been there a couple of time my self. :)

If you don't need to  fix any tinting I'd just start with building finish again and be a bit less active with the sanding next time.

Really, I feel sorry for you and I know how frustrating this is but...  well, think of it as a sympathy laugh.