I have been making plug cutters for holes that are smaller than commercially available sizes.  What was of interest to me was that when cutting the plugs, the resultant holes were much cleaner than holes drilled with a drill.  This seemed to be particularly handy when dealing with already chewed up areas e.g. the bridge pin holes on the University of Michigan guitar.  Regular drills just seemed to chew it up more, as did reamers, and I couldn't find Forstner drills the right size.

The plug cutters are made from brass tubing available at hobby shops.  The tubes come in 1/32 increments and are telescoping.  The walls are approx. 0.015 thick.  I solder 3 or 4 half inch sections of the telescoping tubes together at the base, for support in the chuck.  Be sure and leave a big enough hole in the base to get the plug out.  The teeth are cut as slots with a jeweler's saw, and then filed to a point.  Because there is no room for the sawdust to escape, it works best if you use what the old time machinists called "peck" drilling:  Drill a little, then lift it up to clear the dust, and keep repeating that.

Hope other people find these as useful as I have.

Permalink Reply by Kerry Krishna on July 28, 2011 at 2:49am
Well, nobody else has said it so I will/ Well done ! I wish I had seen this post about two months ago. I was broke and needed to buy one. Not cheep at $35 bucks. Thanks!

This works quit well when you need a custom size plug cutter and matching drill bit, they are cheap and easy to make. The Brass is soft though and the cutters won't last for very many drillings. I have not looked for a source for stainless steel nesting tubing but that would certainly make a more durable tool.

Hope I'm not high jacking your thread with this George but I thought I would show pictures of a project from a few years ago using the aforementioned, home made plug cutter and drill set.

I was given a teens Gibson A mandolin to reverse the awful work the owner did to this thing installing a set of Schaller tuners on his mandolin. A stock set of modern Schallers will not fit the hole pattern originally drilled by Gibson. The owner's solution was to use a hand drill to make the holes larger and wiggle the drill bit around to be sure the holes where plenty big enough. The tuners where still in a bind after he put them in and after several years of use the tuners where ruined.

Here are before pictures, they say a lot! 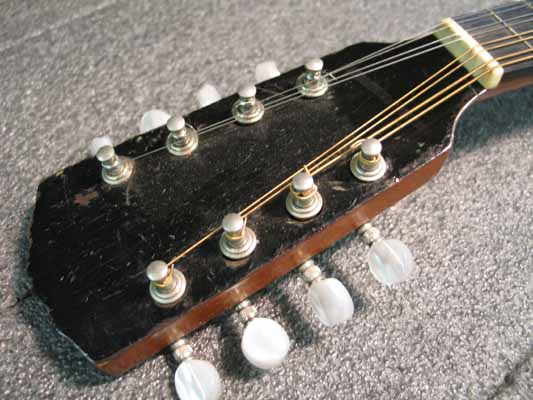 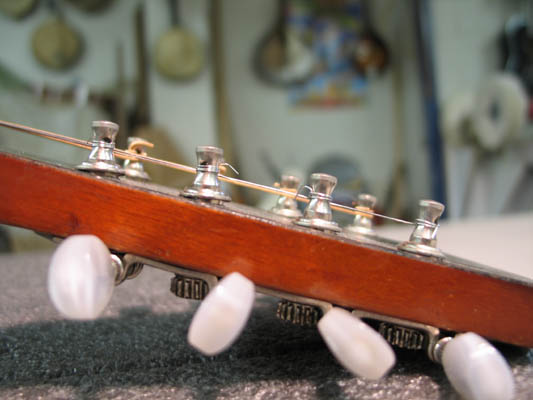 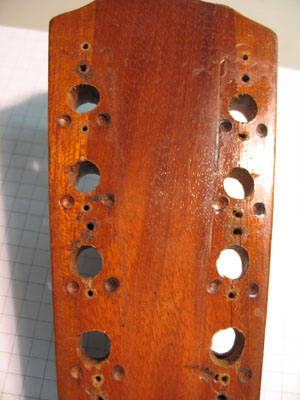 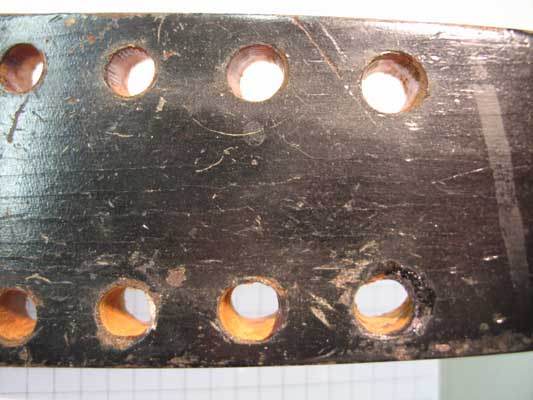 The solution would be to drill out from the rear of the headstock using the custom plug cutters, plug the holes and re-drill for a proper fit for the new Schaller tuners he wanted to use. I would drill the hole to within 3/32" or so of the face side and not go all the way through.

Here is a shot of the nested tubes being made. 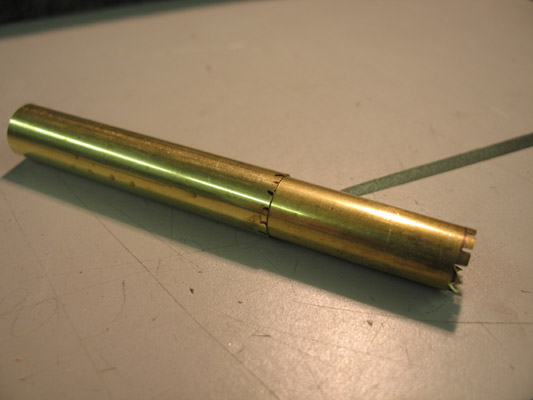 Set up in the drill press. The first hole made. The goal was too remove as little material as possible and hopefully be able to cover every thing visible from the process with the tuners when done. 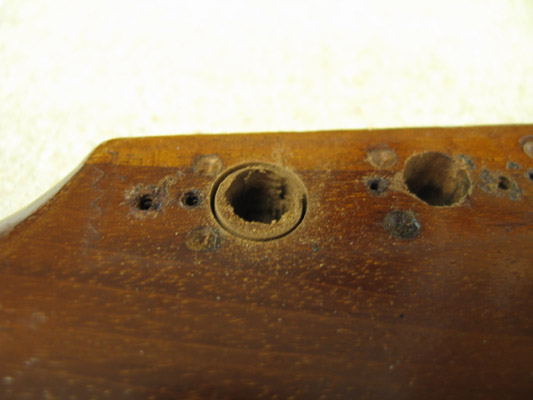 I don't have any pictures actually cutting the plugs but here they are installed with hot hide glue. 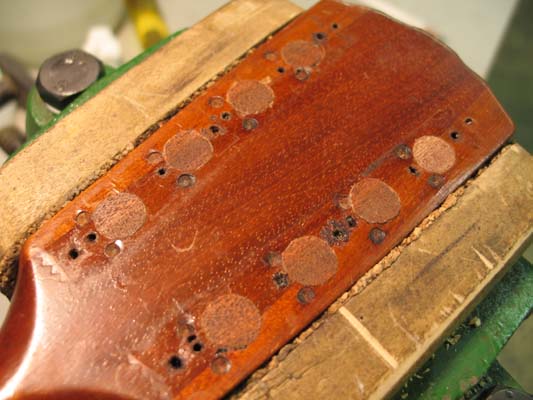 I ended up with a great fit! The two plugs at the top are a smaller diameter, again to economize on material removal.

Here is a view from the front. I will end up filling this side with Black tinted epoxy as can be seen in this picture. 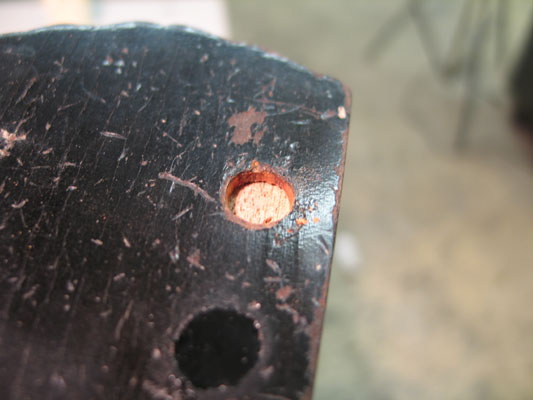 Back to the drill press with a jig used for Schaller post spacing. This is all done from the face side. I spent some time figuring out exactly where I wanted the tuner bushings to land to cover as much as possible of any cooties. 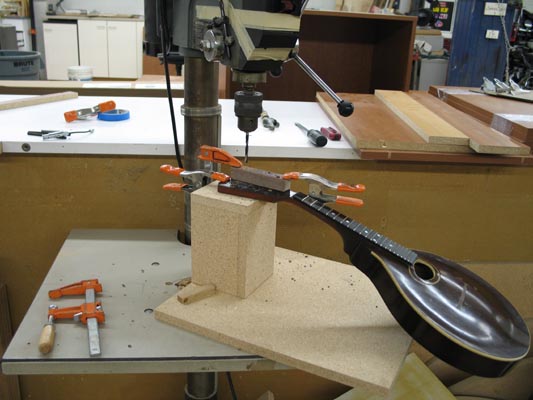 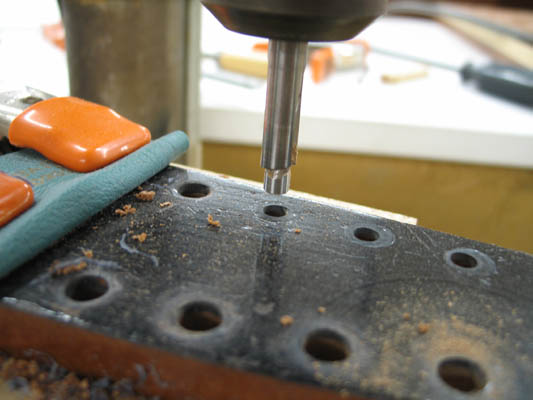 Here is shot from the rear showing the installed bushings in there blind holes. You can see the plugs which had been leveled and finished. I did not over spray. The plugs where finished with an artists brush and lacquer. 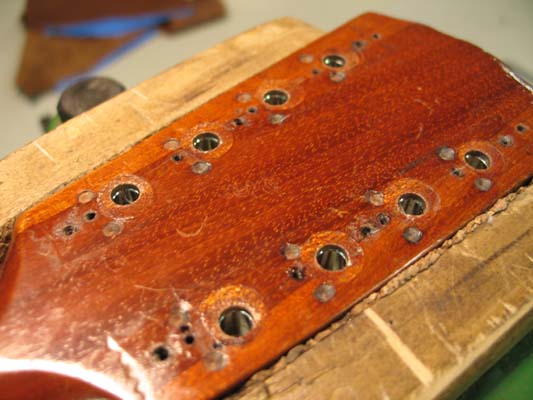 Here is a few shots of the done project. 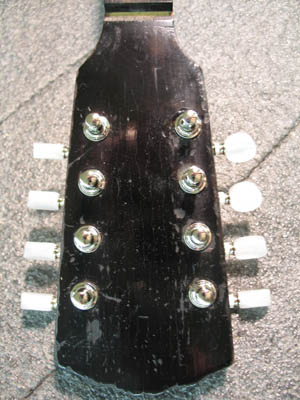 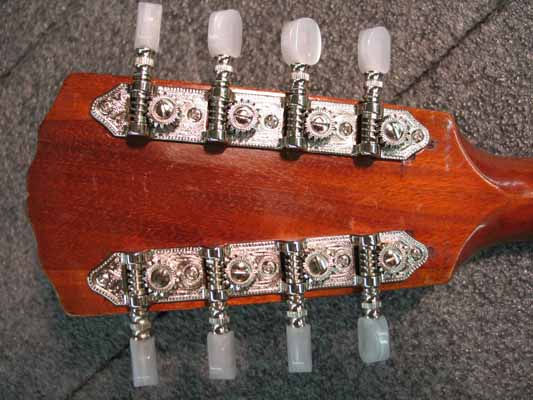 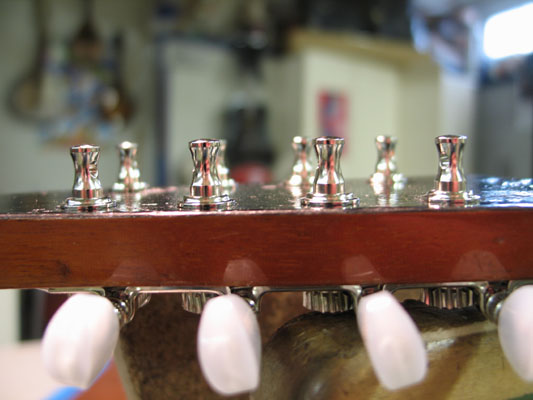 I could not have hidden the completed work as well without the custom size plug cutter drill combo. I may, now that I have seen George's pictures alter the way I had been filling the teeth though. I have been filling both edges of each tooth and George only does one side, leaving the initial straight cut alone. If it works as well or better than the way I have been doing it I will adopt his tooth making method.

Thanks for starting this thread George, it inspired me to get off of my rear end and post this stuff.

Kerry, Thanks for your kind words.

Paul, Great pictures and great work.  My dad did a lot of antique restoration, and his motto was always "Take off as little original wood as possible."  I was able to find the stainless steel tubing at my local hobby shop, but only in two sizes.

There are now 14 plugged holes in the area under the bridge.  I'm sure that's not the indoor record, but its got to be getting close.

The bent razor blade is another handy tool.  I have a very sharp low angle chisel that was great for trimming the plugs on the top.  The sides and braces got in the way of the chisel on the inside.  The razor works much like a miniature convex spokeshave.

Hey Paul, Nice work!  May I ask what you charged for that job?

It's been a few years but I think I charged $400 for the tuner repair work and a complete re-fret with set up, not including the cost of the replacement Schaller tuners. The mandolin's owner is a friend and got a discount.