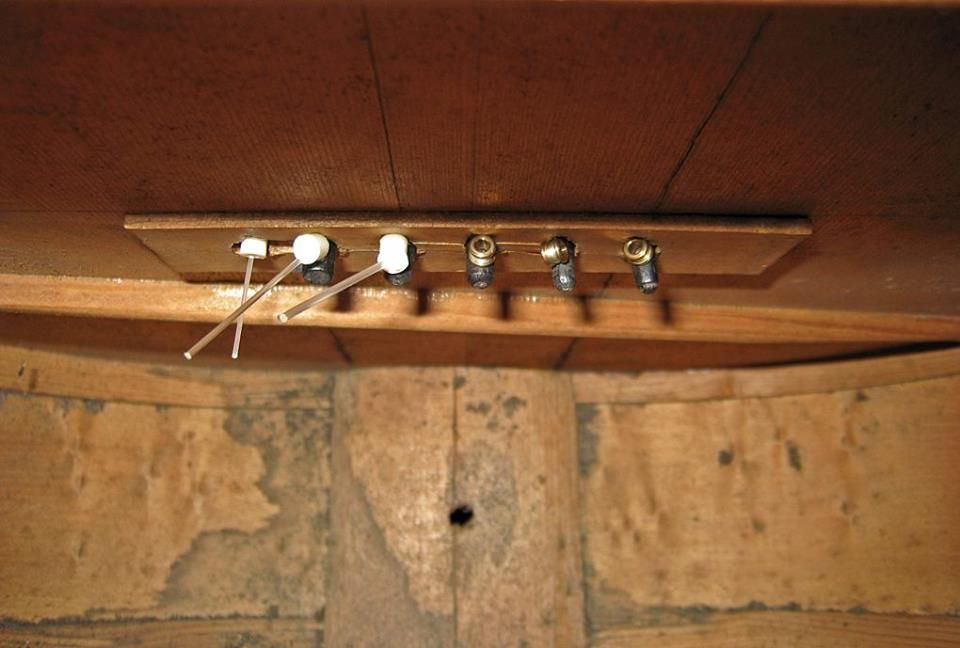 So here is a photo I snagged off of Facebook's 'Old Guitar Pickers' site The pic is fairly self explanatory. Most here have seen this exact damage.  Regular folks would want to KNOW how to prevent any of this happening. The bridge plate may have needed to be a bit different dimensions for it to not crack side to side like this ( And Frank thinks that grain orientation should be front to back and not side to side for this exact reason if I remember correctly)

Frank Et Al', why did the top crack? Bridge pins jammed in so tight pliers had to be used to get them out? Bridge plate loose? Bridge coming loose? Severe lack of humidity in combo?

I have an idea that it is combo of some of the above. What do you think?

Permalink Reply by Mark Pollock on July 25, 2014 at 10:00am
I know that I see some damage just from drilling the holes without any backup, as so many guitars seem to have been drilled. That certainly makes the plate much weaker, I've seen plates where half the thickness is gone between the holes.

Looks like dryness/shrinkage cracks in the top.  For an old gut strung guitar, we don't typically worry too much about bridge plate integrity, because the ball ends don't exert so much force upward.  Early guitars like this were usually strung with big ol' granny knots instead of ball ends. . .

Permalink Reply by Ron frazier on July 25, 2014 at 12:00pm
I would replace the bridge plate
Or at least double it and I like to make the grain run about 45 degrees. The side grain is stronger and if it cracks it will not affect all strings. Also use longer pins and drill the holes and ream them to a taper.

I'm not opposed to someone mentioning that they may have a product that might be of help to someone and I can see where you could view this as the perfect scenario for your product but this post doesn't disclose that it is your website and that you will personally profit from any sells generated by this comment. It's not simply a mention of something that you've seen and used with good results.

I'm not a moderator and I have not more "power" here that you or anyone else. I'm not wanting to restart the pros and cons discussion we had last winter or stir any trouble. I just wanted to point out that this particular post seems more advertising to me than a comment. Personally, I wouldn't have any problems with you mentioning that your produce may be of use as long as you make it clear that it is your product and that you will profit from any sells.

Yes of course, I certainly am the inventor, and sorry for not disclosing that in the post. I stand guilty as charged:) . Ill make sure that i dont do that again, and , it just might help him, and yes, long time no see.

Something puzzles me,  looks like there are 3 nylon strings, how does that work?

Originally, those would have been gut strings, but these days we substitute nylon.  The others are nylon core wound strings, completing the so-called "folk nylon" set. They're supplied with slightly different ball ends than the usual steel strings, but otherwise the same as regular tie-on classical strings.

That style of guitar is very delicate and predates the use of steel strings, so I'd say it would be inappropriate to use the Power Pins on such an antique.

Thanks for the info Frank, never seen that before. Im curious, did you ever do any more tests with the Power Pins? As I remember it, the tests you ran really didnt show any degradation in the sound, or any improvement, is that correct? I thought that doing a blind test that you proposed was a good idea, where the  pins were covered, so the player couldnt see which ones were in the guitar.

It's common to see this type of damage in these old parlor instruments from incorrect string choice. As Frank has pointed out, these would have originally been designed for gut strings. Through ignorance, people put on steel strings and it's slow death. Silk and steel is even too heavy and the little Brass ball ends will tear up a bridge plate in no time. They are often made from Spruce or other soft wood and won't stand a chance. They won't play in tune with steel either. Gut strung designs would have a straight across saddle, so there is no compensation. My favorite strings for these instruments are Aquila Nylgut "Alabastro" superior tension. Elderly sells them and I imagine other vendors do as well.

I was going to just post a picture of the ball ends I use for these strings (they don't come with any) but I thought it would be relevant to the thread to post pictures of similar damage to a bridge plate from steel string abuse and how I went about dealing with it.

This is my 1907 Washburn style 15, the pictures pretty much explain the problem and fix. My situation was a bit tougher nut to crack, it has a bridge plate/ brace that spans all the way across the lower bout, I didn't want to pull the back to replace it. 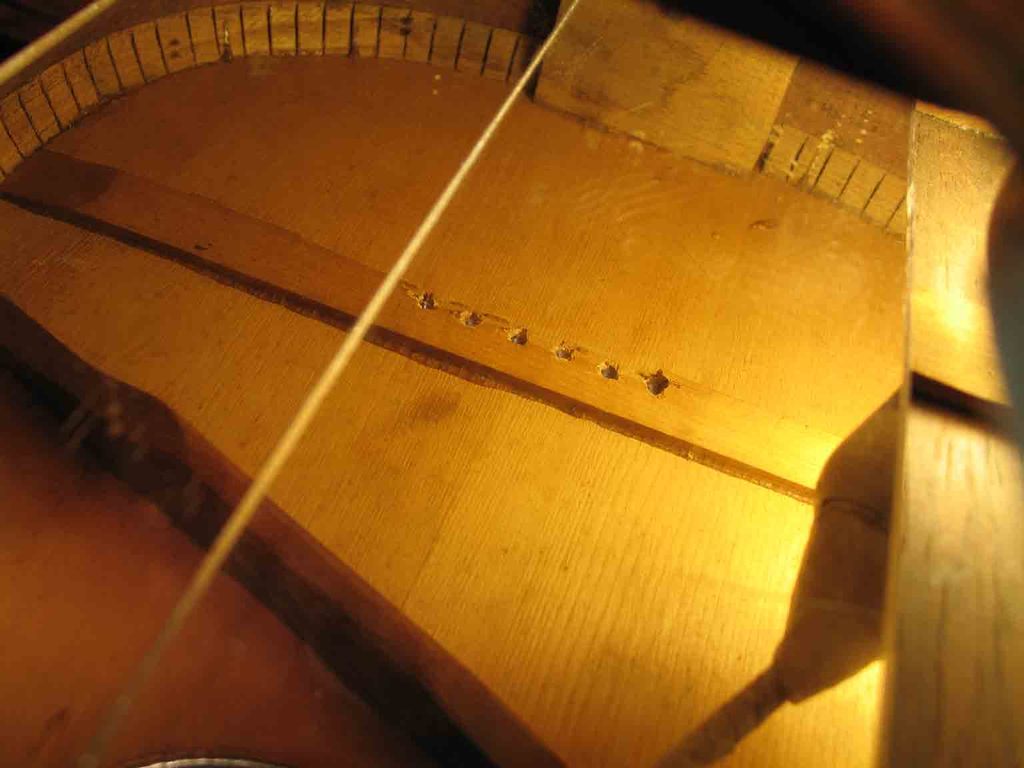 The strategy was to clean up the just the area with the damage and leave the rest alone. I did this by feel through the sound hole chipping away and then sanding with a tool I made in about two minutes. 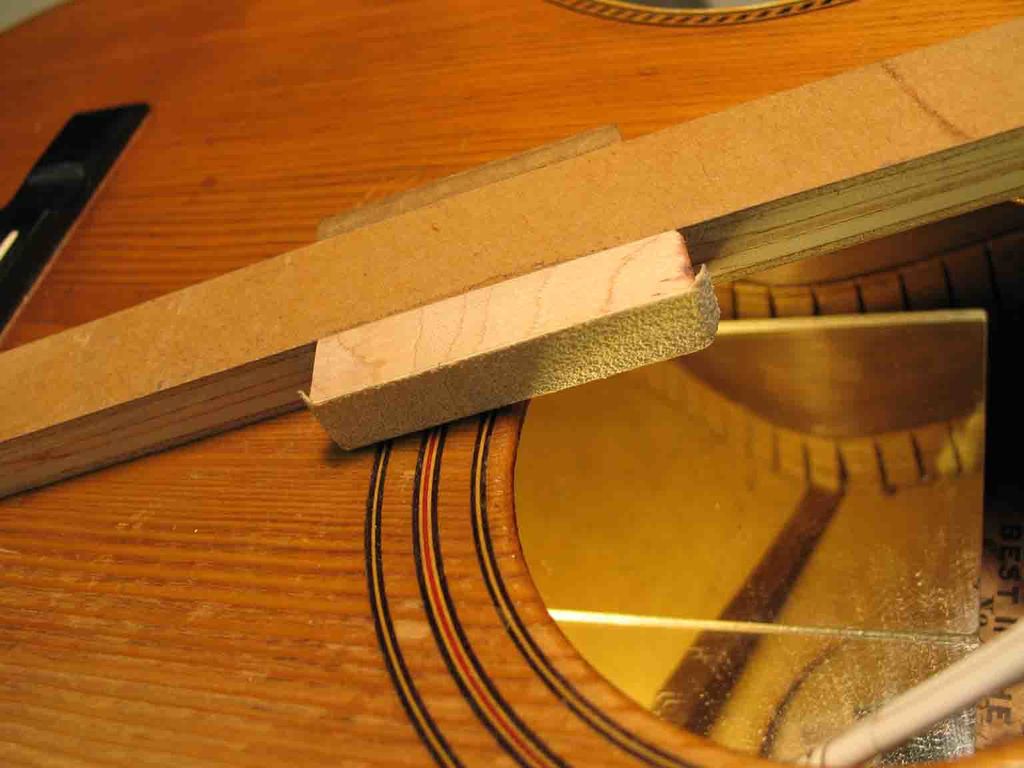 The long piece of plywood would follow the edge of the bridge plate and top, eventually giving me a straight edge where the damage was removed. 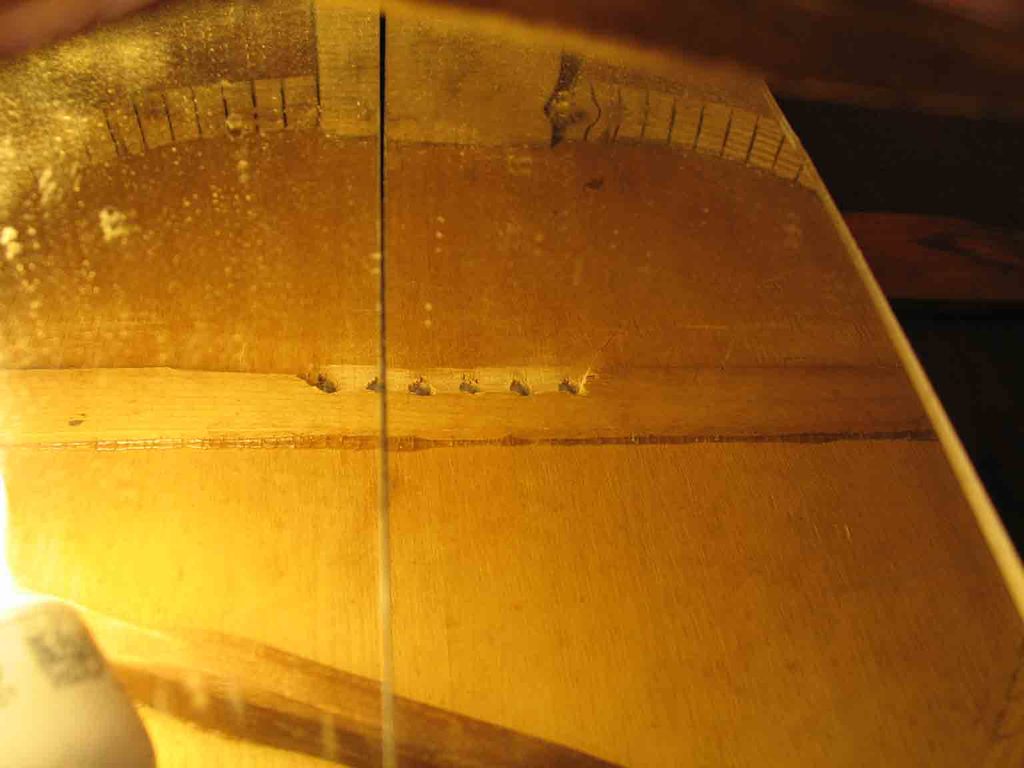 I festered for a moment and decided to make a Maple plywood patch for the fill. The patch is quite minimal and I didn't think it would hold up over time using lumber for this. The bridge plate in this instrument is Spruce, I knew I didn't want to use that. Next couple of shots show the process of making a maple plywood patch from Maple veneer. It was glued up with hot hide glue. 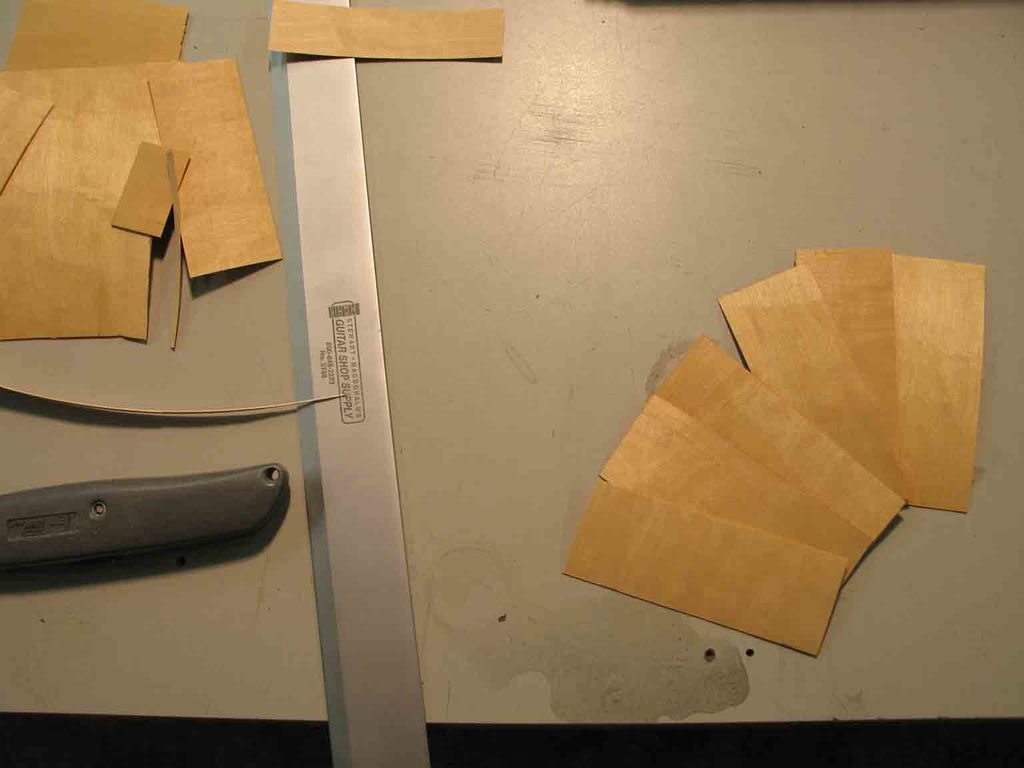 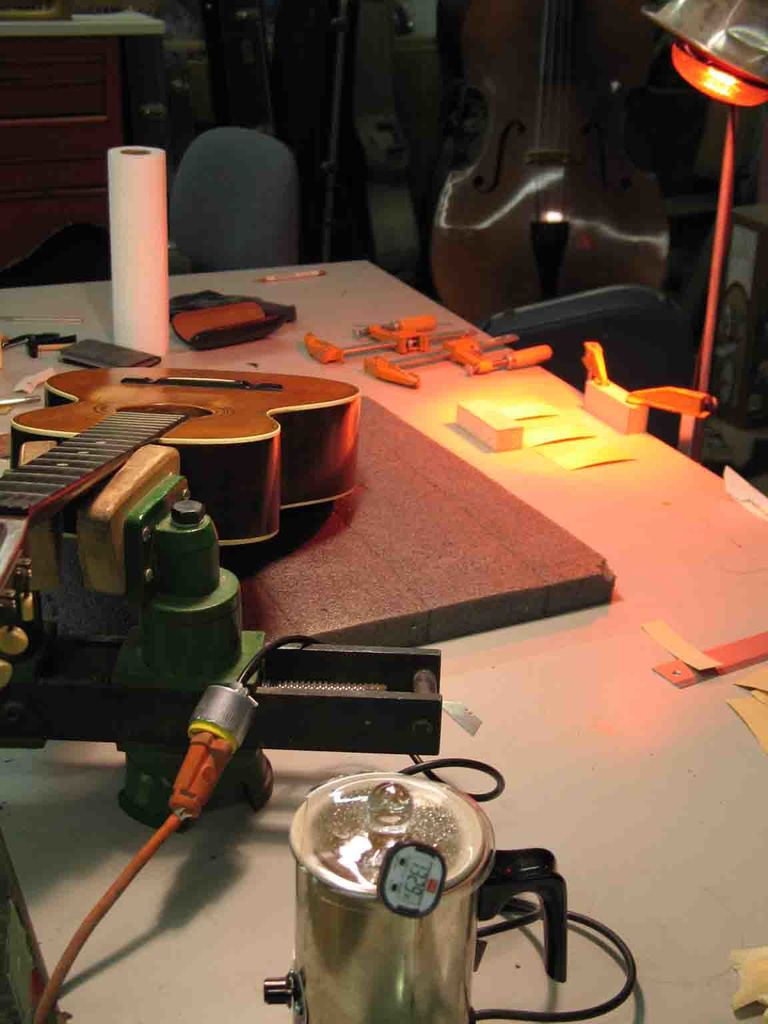 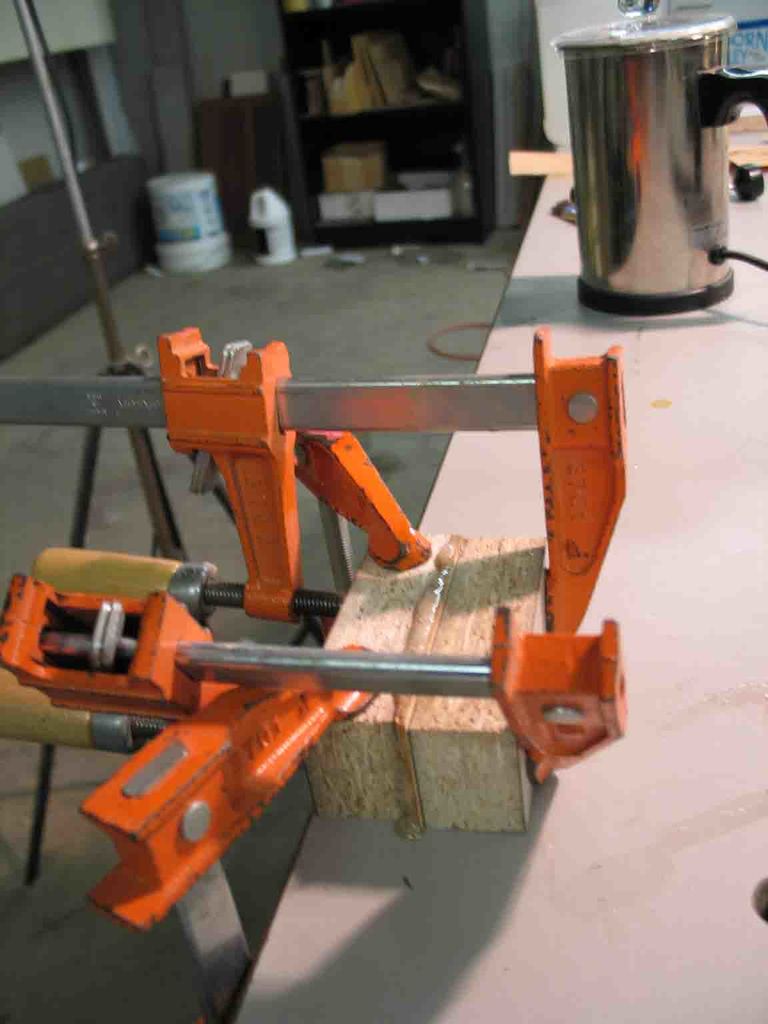 It took me a while, trial and error to shape the patch into a reasonable fit. I glued it in with hot hide glue so the repair could be reversed if anybody down the pike decides to do so. (That won't happen until they pry it from my cold dead fingers though). The Red light is from an infrared bulb to warm things up along with the light bulb inside to heat from in there too. 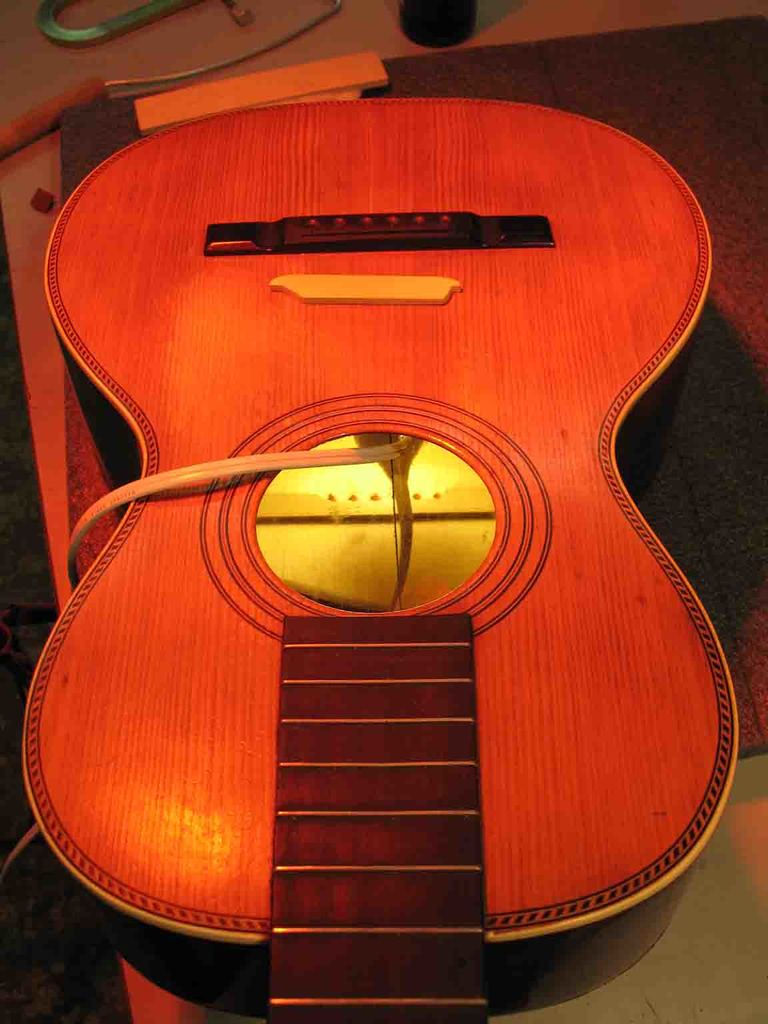 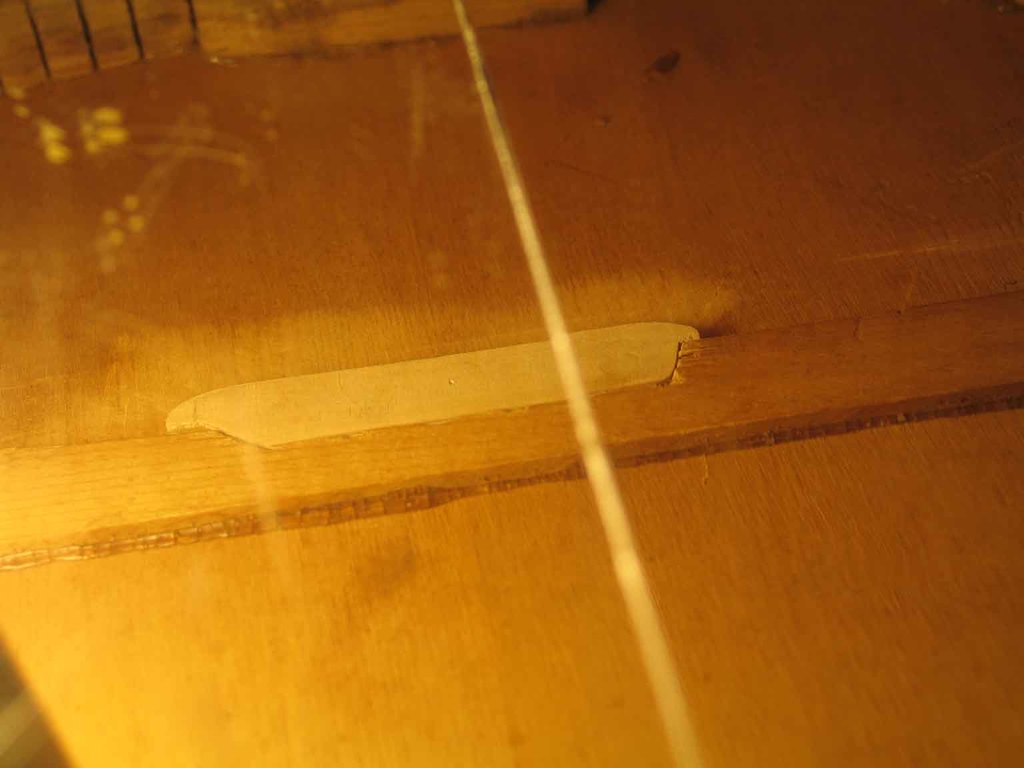 There where some small voids after the patch was placed. I filled them with West System epoxy, none of which contributes to gluing the bridge plate to the Spruce top. I wanted something tough for the job and this worked quite well. 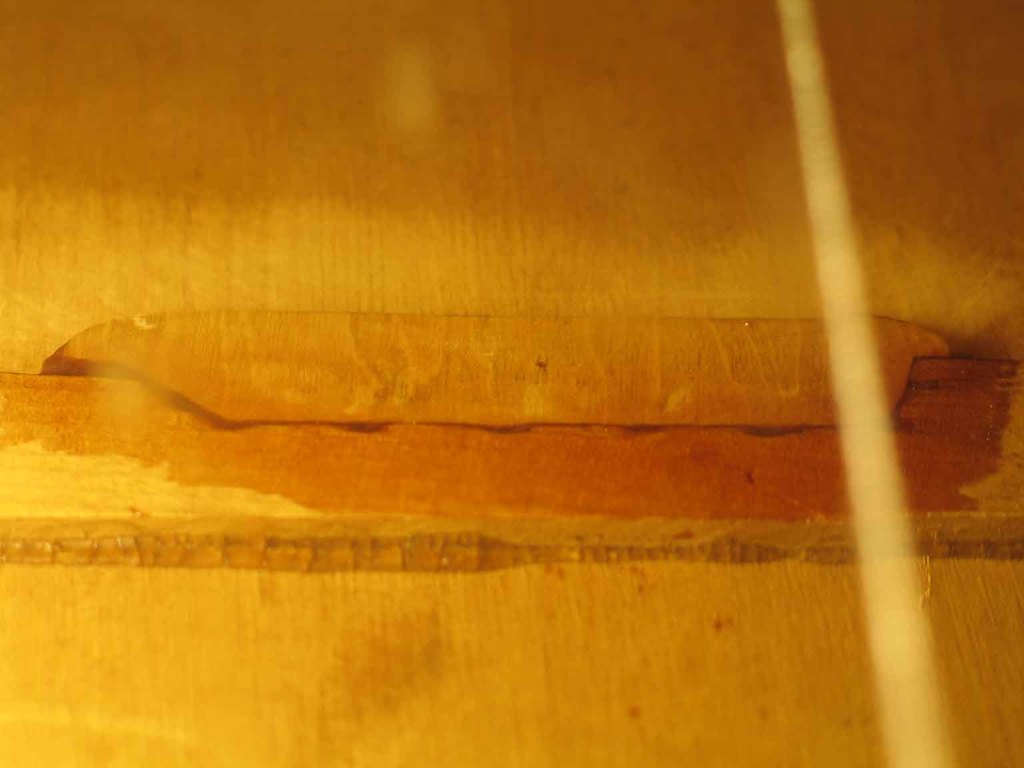 Here it is drilled and ready for strings. I went to a store that sold beads to find a suitable ball end for the Nylgut strings I would use. I found some Hematite beads and thought they would be a good one to try. They are metal (and yes magnetic) and I felt they would make good sonic contact, the round shape would also be non damaging to the bridge plate. The smallest ones I could find at the time where 1/4", a bit too big to go through the bridge pin holes but I wanted to try them anyway, I would just string up through the sound hole. The 1/4 inchers are pictured. 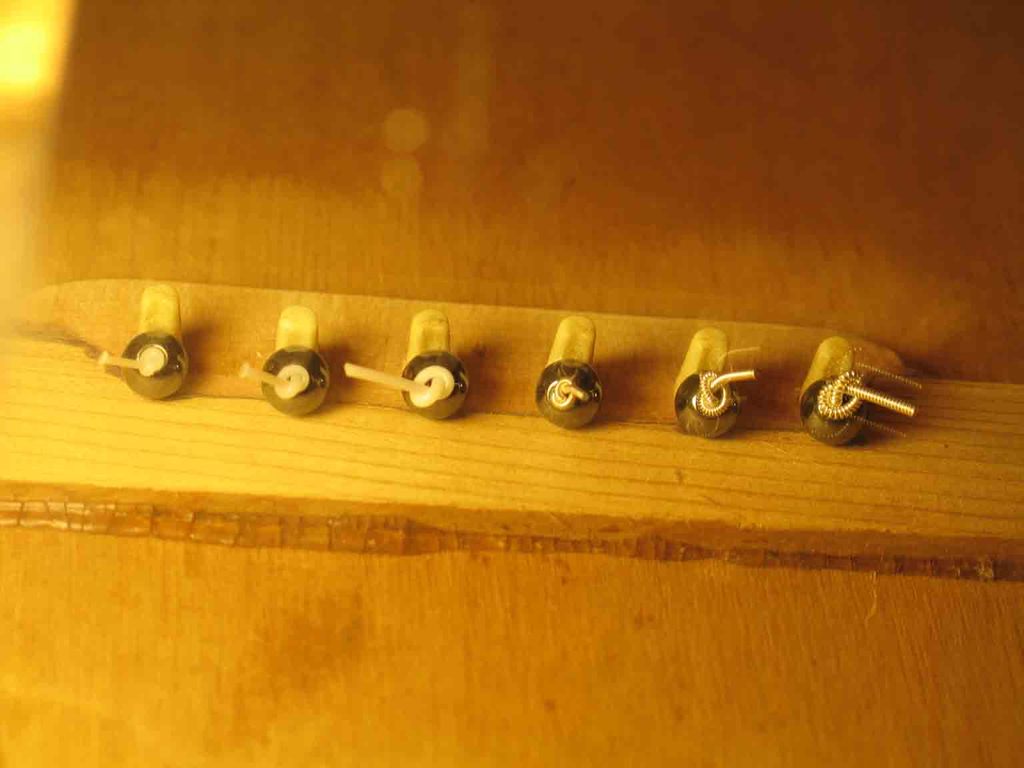 I was good with this until I had to change strings again and went searching for smaller Hematite beads. I found some that where 11/64" and would just go through the bridge pin holes.

You need to pay attention if you go out and buy some beads. The hematite ones are solid but most metal beads are made as hollow spheres and can cut your strings. The drilled hole needs to be smooth, no sharp edges. The hematite beads are perfect, they are ready to go right out of the package. A pack of 50 was only a few bucks and I use them now as my bead of choice when setting up an old instrument with plastic strings that have no ball end.

Kerry, I think if it was me, I would pull the bridge plate on your project and replace it. You might consider the Nylgut strings for it as well, they sound great on my Washburn but there are many other choices available as well. Pretty much anything suitable for a classical guitar would work. Avoid any steel or silk and steel though...bad.

Frank, not to belabor the point, but are you saying that its "inappropriate" to use Power  Pins , in this case, for structural, cosmetic or antique reasons.  Do you think it wouldnt solve this problem, all other considerations aside?