My 1st post here. My story is that a friend of mine gave me an old Martin that someone gave him when he was 17. He's nearly 90 now so it was awhile back. We drove down to Gryphon last summer to have Frank and Richard evaluate this guitar and they concluded it was a 1906 0-30.

As you can see it's very beatup. Sorry about the picture size and shooting from the bathroom.

Somebody sanded the original finish off the top. My friend when to a repairman to fix the bridge and he replaced it with a non original bridge and kept the original Martin bridge. There's cracks in the top, big ones in the lower bout, the top of the upper bout is starting to crack and the back is forming a crack starting at the lower extremity of the body. Also much of the ivory binding is loose or missing. The action is on the high side and is gets out of tune fast as you go up the neck

My goal is to put this guitar into decent playable condition so I can use it to mess around with. My friend gave it to me because he knew I was playing it everyday. Plus he's an accordion player!

My plan of attack was to start by...

1) removing the back to get access to the major components but I'm reading from you guys that it would be a bad idea to do that.

2) repairing the cracks in the top, back, and sides (Titebond then linen tape re-enforcement?)

3) having access to the neck block, I could remove the neck and do a neck reset. (yeah I know this sounds overly ambitious but I'm feeling cocky after doing a complete re-fret and re-installing the bridge on an old Gibson [also given to me by a friend who was given this guitar but he's a lefty so he passed it onto me)

5) performing a re-finish to the top, sides, and back with a French-polish type finish (unless I hear the majority of responders pleading not to do such a sacrilegious thing)

This guitar reminds me of watching Leon Redbone on SNL and being totally blown away. I wish it was a D-18 but grateful my sweet friend parted with it. Just trying to make a good home for a little bitty waif of a guitar... 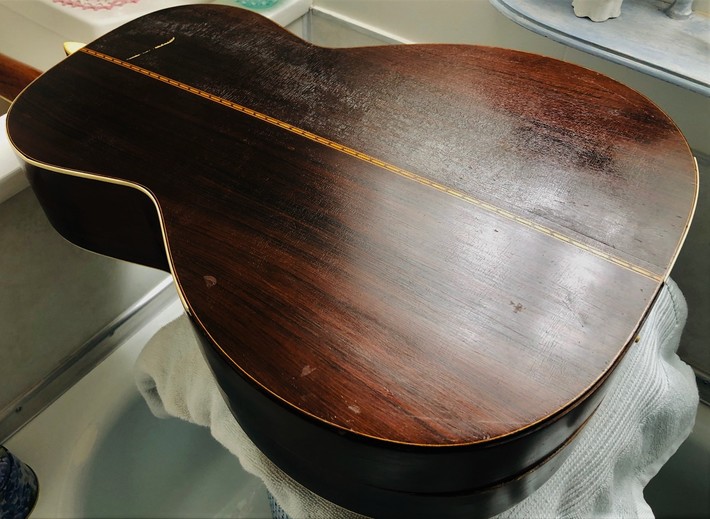 Thanks for the advice. Good idea to make a template first. StewMac has a nifty tool for fixing bowing tops but at 142.00 it's a bit much for a tool I'm only going to use once...

Speaking of cracks I'm starting to think about my workshop. It's in my backyard shed which will start getting hot as summer comes. There's no AC or humidifier so I'm wondering if there's a point when I'll have to start working on the guitar inside the house. We live in a mobile home so not alot of spare room...

Here's a new picture. Whoever fixed the middle crack first time didn't check to see if the brace needed to be reglued....Dave 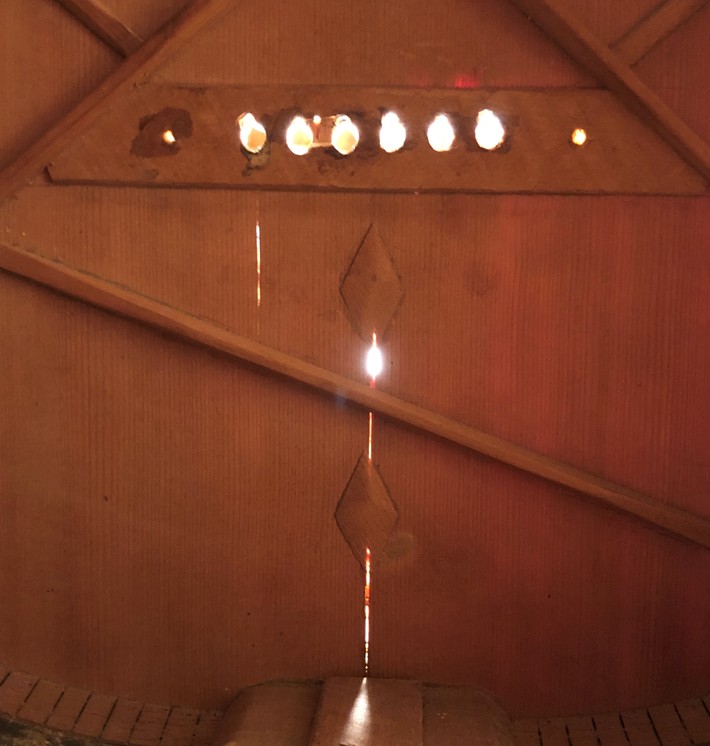 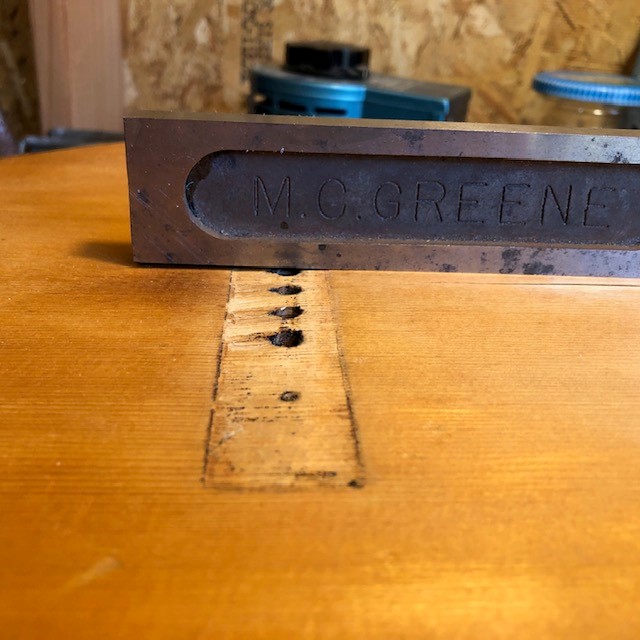 would you mind critiquing my repair steps for the top? There may be some glaring weakness I’m not seeing…

1)  It seems like the place to start is repair the bellied top. The only way I can see to do that is buy a Thompson Belly Reducer Kit. I hate springing for more tools I will rarely use but I haven’t found a better solution. (except for the clamping caul you made but I don’t have a machine shop!)

2) Crack repairs. I would love to be able squeeze them together then put a cleat underneath. (I bought some Thompson cleat strips for this) I don’t think this will be possible without separating the top from the end block and that doesn’t seem like a good idea. So filling the cracks with a spruce sliver is my last option. Since the top finish is almost all sanded away I’m hoping that a wash with alcohol will color the splints so as to not stick out like a sore thumb.

3) New bridge plate. I have some StewMac maple bridge plate stock for this. I’m thinking of making it slightly bigger for extra reinforcement but let me know what you think.

4) Travers brace reglue. I have the Titebond Hide glue for this. I’ve been reading good things about the fish glue too…

Next chapter deals with the large side crack and the flattened back with loose braces, oh boy...

Appreciate your feedback very much!

I've used fish glue for most everything lately. I like it's long open time, tackability before clamping and ease of cleanup.

Heard lots of negative things about Titebond's hide glue especially if it's not real, real fresh, but no personal experience.

To deal with the distorted top contours, and without needing fancy new tools, you could consider the technique that Frank shows here:

Essentially it os to make a plaster of paris cast of the soundboard contour (in its current distorted shape) then sand the cast to the desired shape and use that as a form to press the top back to correct shape.  Once you have a form to press it into you can potentially use heat and weight (hot sandbags, heated in a microwave, another FF trick) to reshape the top.  Disclaimer - I have never actually tried this myself, but I just remember seeing the tutorial and thinking it is a cool looking technique.

Thanks for sharing that info. I've been reading alot of Franks blogs but wouldn't have thought to look at a mandolin repair. I'm going to read and re-read this article!

Hi David, I'm not sure that the plaster approach is suitable for a flat top guitar. It is more beneficial for carved tops and backs as in violins and mandolins, for instance. But I could be wrong.

It's true that buying a tool for just one use is a pain and a drain. That's possibly why I have, over 40 years or more of instrument work, made fifty or more tools and jigs that are listed in the Stewmac catalog. And many that are not, yet. However, I have bought the Stewmac version of my own creations, often after 10 -15 years.

Did the same with flattening tops aids and jigs.

I'm contemplating a trip to Home Depot  for materials to make clamping cauls to fix the bridge/top belly.

A question though, we are talking about actually "flattening" the bridge/bridge plate area and not dealing with any radius on the top as there is on the back, right?

The replacement bridge I got from SetwMac is perfectly flat while the old one I removed has a pretty good bow on the bottom.

Another thing I need to mention is my workshop. I the morning it's a beautiful 78 degrees with 30% or so humidity. It hovers around that temp till the afternoon. Around 4 PM with the door closed it was over 100 degrees with 15% humidity. At 7 PM it's down to 90 with the door closed. Is this going to be an issue moving forward with the repairs? I was thinking as long as there was no stress put on the instrument with string this wouldnt be an issue but I'm starting to have 2nd thoughts. Comments?

Hi Dave, others may have different, even better ideas, but what I do is to shape the bottom of the bridge to suit the radius of the top. I have a belt sander that has the desired radius preformed into the base plate, so its quick and easy to radius the underside of my bridges. For the variety of other top radii, I have to address I use different blocks with different radii, covered in sandpaper, and I run the bridge over them.

The photos attached here show one of the methods I use to flatten or return the top to its original form, if possible. In some cases that may be flat.

After the heat reshaping procedure, I decide what is the best way to keep the top stable. This may involve a new bridge plate, an added brace, or a bridge plate and brace modification.

The beam across the photo now has 1’’ holes in the area of the bridge so that I can apply more heat whilst still clamped. I have done countless guitars using this method with good results.

However, getting it right with one’s first guitar repair may be tricky. I cannot outline all that I have learned in this space. But you get the idea. Also, you would need the back on the guitar or the guitar in a form to stop the sides from spreading from clamping pressure, I would think.

Just thought, another way to shape the bridge is to place sandpaper on top of the guitar and run the bridge back and forth over it. 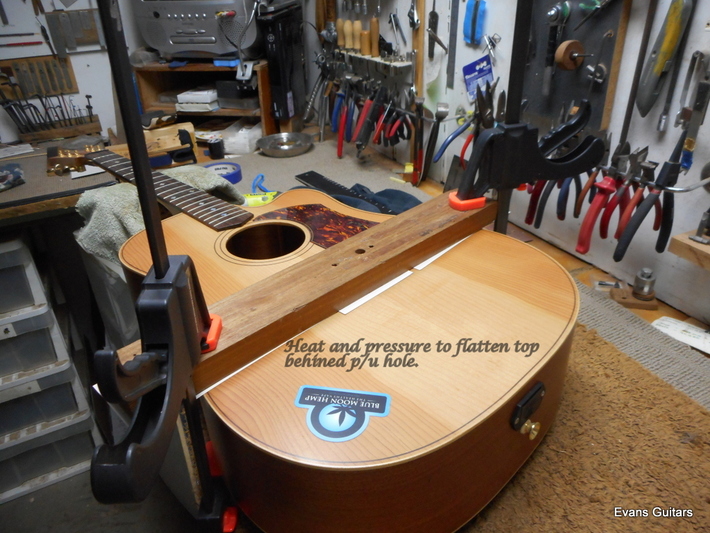 1) Got the big side crack and another smaller side crack repaired. It took four separate rosewood strips to reinforce the inside part of the crack. Used fish glue and it seems really strong.

3) Filled the long center crack in the top with a spruce sliver. Had to remove the old cauls and the loose travers brace to do this. Will reglue the brace and add two long spruce cauls, the Thompson ones you get from StewMac

QUESTION: There are two chips missing from the area where the bridge is glued down. I lost the chips so I can't glue them back in. Is it ok to fill the chip voids with epoxy or do I need to make a spruce patch for this area? I am installing a new bridge plate so the area below the bridge will be stronger 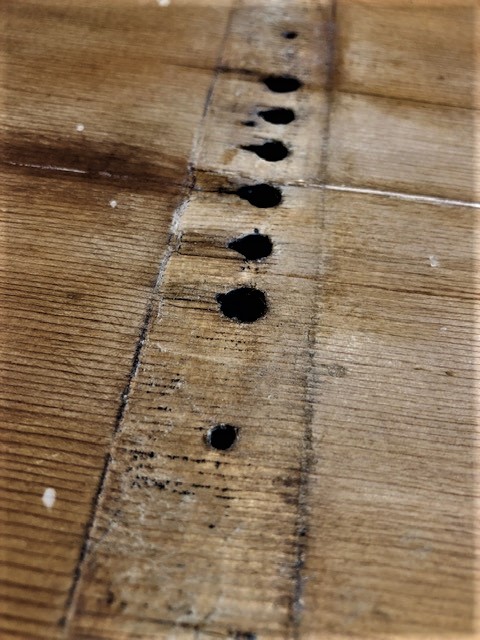 I know a well established luthier that does use epoxy and saw dust fill tear out but I've always made a point of chiseling out the damaged area and inlaying in new spruce to create a new glue surface. I use epoxy glue to inlay the spruce so if the bridge needs to be pulled later, the new wood doesn't come out.  Here's a Washburn 1897 Style New Model 145 I did this on. Thanks for the advice. I was thinking the spruce patches would be the best quality solution but I was kind of hoping for a quick fix, shame on me...

Hi, yes I'm with Chris on this one. Here is how I have done similar damage at times on many guitars. I feel happier using timber.