A customer brought in a 1958 Thin Twin with a severe backbow that renders it unplayable. It has a truss rod adjustment nut that you access through the heel. Does anybody know how this works? I'll probably be removing the fret board to deal with the backbow but the workings of this truss rod intrigue me. Any info would be appreciated. 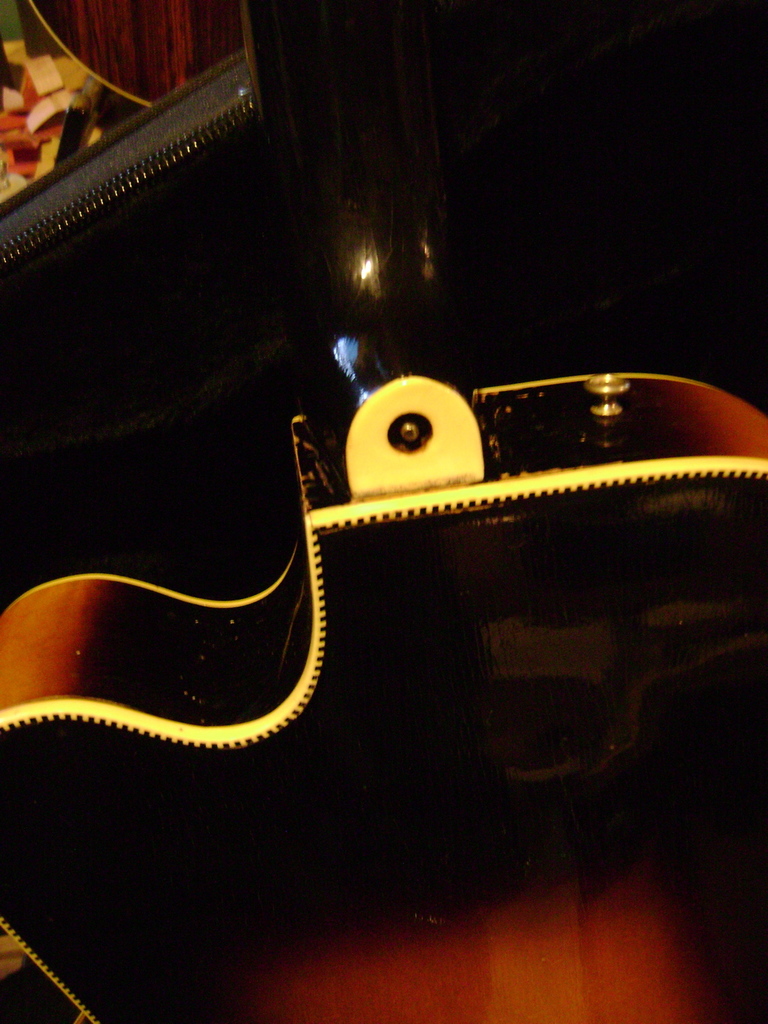 "How it works" may be phrased a bit generously, as this would seem to infer that it actually does work.

The truss rod is essentially a U-beam with a curved end at the nut, and a small steel plate above the beam (between it and the fingerboard) at about its mid point, leaving it angled downward away from the board as it approaches the heel. Then at the adjustment point there is a threaded rod anchored to a plate held in place just below the board.

The threaded rod goes through a hole in the U-beam, then an aluminum spacer, and when you tighten the nut is is supposed to push up on the U-beam, pushing that end up closer toward the fingerboard. The idea seems to have been that it would lever on the plate between the U-beam and board midway along its length, pushing the center up and headstock end back. They never really worked well though, and it's kind of hard to figure out why they even would have tried this, as I believe the Gibson truss rod patent was long since expired when they put this design in to production.

I replaced one a few years back with a modern double action rod, and made a gear box to position the adjustment nut in its original position. Kind of overkill in hindsight, but it was a fun project at the time on a cool old Barney Kessel. Here's a discussion where I posted some pics of the conversion in another forum a few years ago.

Hi David, I came across this today while researching a Kay guitar. I know this post is a few years old but hope you can answer a question.

I found a Kay 1959 Upbeat today at a swap meet, the body and neck are in great shape with just the usual finish checking, I'll need to replace the bridge, Pots and find a pickup cover. I found in the case the brass tool for adjusting the truss rod, which was a surprise, the neck seems straight but I noticed that when I insert the tool there doesn't seem to be a nut to tighten or loosen. Is this something that can be replaced without removing the fretboard? Assuming the rest of the parts are present, I can see a threaded hole at the bottom of where the truss rod adjustment screw should be.

Elegant work David. Thanks, I really enjoyed seeing that!

Eric, if you could, please take photos and post if you pull that fingerboard.

Attached is a photo of an old Kay. The main gig guitar for the owner. It has that same rod heel adjustment. It had a little too much relief. I was worried about adjusting that nut. I lubed it with Tri-flow and clamped the neck into position. It did the job. I was surprised that it worked well.

@ David: Thanks so much for the detailed "how & why".  You employed a brilliant solution and excellent engineering.  Kudos.

@ Thomas:  VERY cool guitar.  I'm also having a lot of success by clamping recalcitrant necks into their correct position before turning the truss-rod.  It works great for bows and back-bows. OF COURSE; there always the exceptions. With more & more oldies but goodies coming into the shop, that was a valuable procedure to learn.

@ Eric:  Best of luck brother.  Those are some cool guitars.

Y'all have a great week,

David, I'm with Tom and Paul, awesome job. I'm thinking of a double acting rod and access from the extension with as small a hole as possible.

Tom, How's Ohio? I will definitely keep this post alive with some photos as I progress. This one's thanks to Rick as you may have guessed. It's his third and will be my third reset on this model.