Somebody oughta' make these...

Sure, everyone loves and uses radius cauls all the time.... indispensable, really.  But every so often, there's a need that arises for one that's convex instead of concave. A "reverse caul", if you will.

Maybe for the underside of a curved nut, or....?

Then it occurred to me that some outfit could churn-out a matched set and make some profit.

Any StewMac or LMI employees want to chime-in? 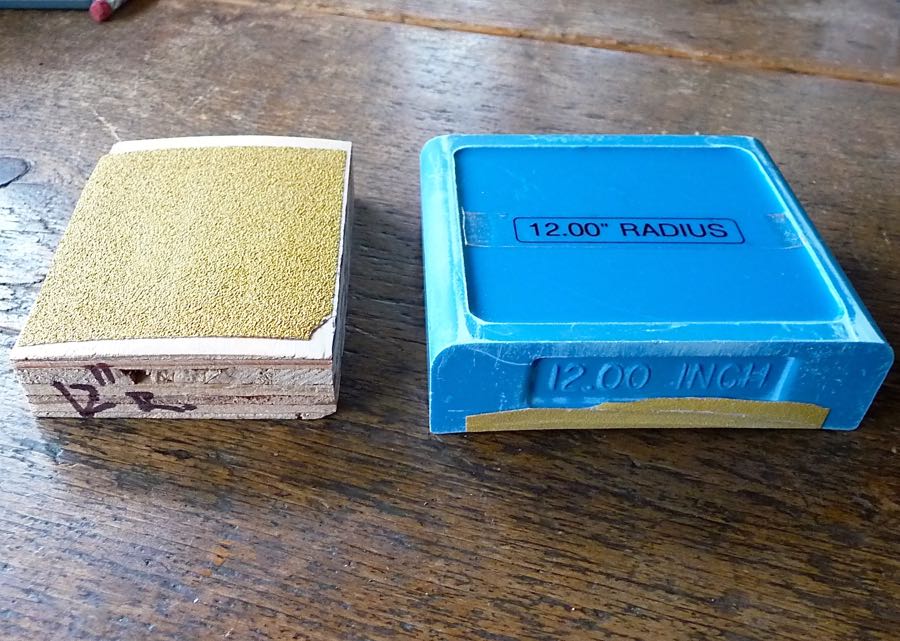 Mike anyone with a copyer like they use for doing arched tops like Violins or that can do it. You just have to take some plaster  molding material to get the reverse copy .Then cut it out of the piece of material of your choice  with the copyer Bill...

Mike, What are you doing  with the convex block?

The last use or two was for the underside of curved fender nuts, and before that.... I forget!   Seems it was something to do with making an one-off oddball little caul to fit snugly over a radius'd fingerboard extension.

I thought about the plaster molding, Bill, but was sorta' looking for something a little more sturdy and rigid. The blue cast-epoxy blocks are great, the hardwood blocks are fine.  Not too sure that plaster would give the hardness and longevity.

In a pinch, the "do-it-yerself" sanding of one block at a time works, but I was just checking to see if anyone had come-across a commercial set out there.

Permalink Reply by Andrew on February 27, 2015 at 1:09pm
How about doing the mold thing, but with a bit of epoxy on top of a chunk of plywood? Or friendly plastic for that matter? Of course we often need these kind of things on the fly, so those options might be a bit of a pain. I dont care to wait that long for most cauls so I usually end up taking a piece of wood to the belt sander and then doing whatever refining is necessary by hand.

Permalink Reply by Glen H on February 27, 2015 at 1:55pm
I got a convex sanding dish from someone (can't remember who) to sand the bottom of bridges to match my top radius. It was about 10" diameter.

Yes, and it works well... I've done that for string basses bridges, et al.  Someone used-to make a jig that would hold the bridge at a perfect 90deg while moving it across the sandpaper.

This was it (top pic)... or something real similar.  Then there's the one for violins/violas (bottom pic). Both use a holder & roller setup to keep the bridge upright while doing the sanding.

Never saw one for a string bass so I made one out of scrap wood. It was adequate & got the job done, but not terribly fancy. 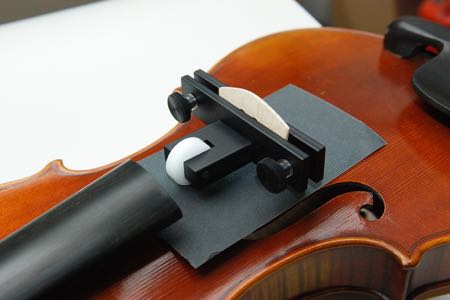 Put waxed paper on the form or say the tail of an actual guitar, paint some bondo on a flat block, mash the block to the form, weight in place, go watch House of Cards and you have a radius block.  The few that I made 10 years ago and have used many times are still like new.

Two problems IME with making tools for Lutherie:  First Luthiers are by our very nature the quintessential reverse engineering sorts who often love a great idea just enough to make their own....  And second bringing anything to the Lutherie market has associated costs, possible middle men (and women), often making things cost more than some would think that they should.

Not to mention that the Lutherie market has two very different segments.  You have the folks who make our living with Lutherie and think less of purchasing tools knowing that in time.... we can recover the costs through billable hours.  And we have the hobbyist market who are already spending more than they wish having to start from scratch with outfitting for Lutherie.

Nut files a a great example of this.  A decent set can cost $100 and up and this is nothing to someone who uses them every day, year in and year out.  To the first time builder it's a PITA to pay $100 to cut six nut slots....  This often results in very different perceptions of prices at say Stew-Mac, LMI, etc.  Hobbyists often say that these suppliers are expensive and working in the trade Luthiers often say nothing and get online and just order the tools....

Frank's Jack the Gripper is one of my favorite tools and clever as can be.  Not a single instrument passes though our shop with an input jack suitable for Gripper use without getting snugged up.  I'll add that it's pretty rare to find an input jack that is actually not loose either.  This tool is nicely priced, very well made, solves very common real world issues, and can make you a star with a gigging musician who has to go on stage in 20 minutes and their input jack is loose.

And we have the hobbyist market who are already spending more than they wish having to start from scratch with outfitting for Lutherie.

Your point is accurate except that I don't spend more than I wish. I WISH I had more to spend.  I wonder if I can start a web site to review the tools so I can take them off of my income tax... but then I'd need to make an income while I spend my time tested all those neat tools. Catch 22.