I have a Gibson LG-0 in for repair and I need to replace the bridge plate. I have a few tools to do this, but I would like to hear or see what tools some of you use.

A heating iron (shaped like a bridge plate), a moist rag (positioned between the bridge plate and the iron), very thin metal spatulas, and, most of all, patience.

I use a similar method which was presented at UMGF by John Hall of Blues Creek Guitars.

In Don Teeter's book, he describes a great bridge plate removing tool. It's nothing more than an old chisel that's been heated and bent into a 'U'-shape, keeping the flat edge ('bottom') of the chisel facing out and the cutting 'V', of course, tucked on the inside of the bend. I made one up in about 15mins and it works great.... 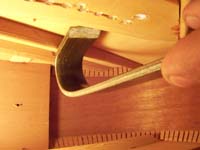 I would bet that the bridgeplate in your guitar is made of spruce (so it doesn't weigh much and doesn't do much). I would fill the old holes with dowels and put a maple patch the same size right on top of it. Frank Ford says it should be .090" thick with the grain parallel to the grain of the top.

Unless you want to remove the old plate for the experience.

My wife inherited a '66 LG-0 with spruce bridgeplate and screwed on plastic bridge. The bridgeplate had bad gouges at each pin hole, and deep troughs between the holes (presumed to be breakout from the original drilling), plus the screw holes from attaching the bridge.

Rather than removing/replacing the plate, my tech suggested cutting and plugging each of the pin holes, the troughs between the holes, and the screw holes from the bridge, using StewMacs tool for cutting/plugging holes. He used maple plugs on the bridge plate, and also plugged the original pin holes and screw holes in the top with mahogany.

The he made and fitted a new BRW bridge. I think we payed ~$250 for the whole repair, including compensated bone saddle. Most of that cost was the new bridge... apparently, cutting and plugging the holes was pretty straightforward with StewMacs tool.

I'll chime in with others: don't take it out unless absolutely necessary. Fix it instead. The Teeter tool has the potential to trash the top, which I've seen a number of times, or only remove part of the bridgeplate, which significantly compounds your troubles.

It's very important to provide a firm surface to actually stop the string balls. The bridgeplate does most of the work. Someplace on this page you will find a visual guide to fixing the plate. The Stew-Mac tool is great, but expensive unless you plan to do this procedure over and over.

Permalink Reply by Ian Barker on July 13, 2011 at 10:47pm
Stewmac offer a quick and dirty solution with the 'plate mate' - just a drilled and slotted brass strip which reinforces the damaged bridge plate and provides a solid surface for the string balls to bear on.  I copied this idea and made my own, which works fine and has no negative effect on tone.  OK, maybe it's not the optimum repair for a valuable instrument, but what's the verdict on this?

Permalink Reply by Paul Hostetter on July 14, 2011 at 7:57am
No verdict, but since my workflow is made up of instruments with all kinds of string spreads, there's no one product that'd work. I also prefer to use formica, lightly glued in place.

Good idea on the formica, being light and strong.  Couldn't agree more about the potential of Teeter's u-shaped chisel for causing damage and grief... however, that same potential holds true for any sharp tool in the wrong hands.

With enough practice (and still proceeding with great caution) it's a valid tool with a legitimate use.

A few years ago I put up an article on my shop's site about replacing a gibson bridge plate.  I still do it the same way with one noteworthy exception, I no longer use a hot hunk of steel to heat the plate.  These days I use the LMI heat blankets for bridge and bridge plates, they work very well.  I still use the same hook pictured in Mike's post.

The Formica and plate mate are great for dealing with wear and damage around the pin holes. I have made my own versions of the plate mate with heavy brass shim stock. On the other hand, cracks that travel across the pin holes compromise the integrity of the bridge plate entirely and often result in a severe bellying of the top and eventually a cracked bridge. On these the plate mate approach is less effective because there is just not enough span above and below the pin holes to strengthen a plate that is cracked lengthwise and starting to fold inward. Plates with deep cracks call for replacement or a bridge plate overlay. Most of those that crack do so due to grain direction. I use the LMI blanket system when removal is necessary.