Action On A Kingman 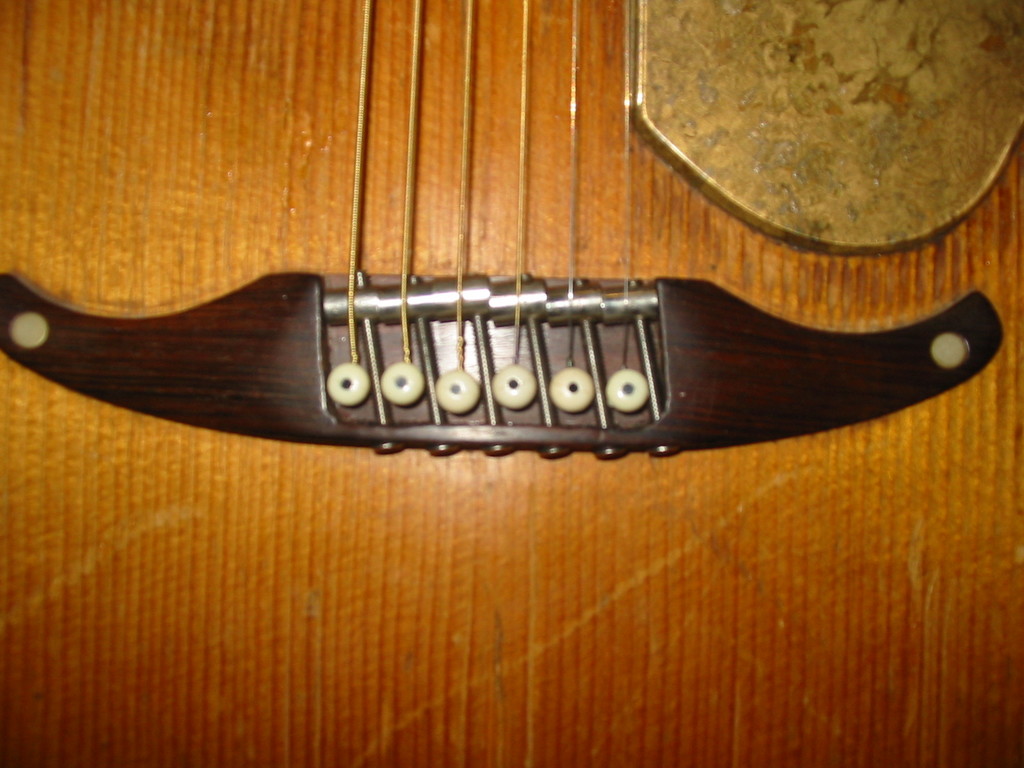 I am having a problem getting the action set on this 60s Fender Kingman. As there is only 3 sizes of saddles the B and E stings are to high.The high E and low E are the same at just under 5/64ths, Any help with this would be welcome. The 7.25 radius on the fret board is not duplicated by the saddle using the available size saddles.  .

Unfortunately, what you have is possibly the most poorly designed bridge in acoustic guitar history. The rest of the guitar follows suit.

There are 3 ways to set the string radius:

1. Add shims under each saddle you wish to raise. No worry about sonic degradation from that method. Those saddles & the bridge design annihilated any chance that guitar had of ever sounding good.

2. Remove the saddles that are too tall and file/mill the bottoms until they're at the proper height.

3. Remove the entire bridge assembly, reproduce the shape of the bridge in a conventional slot saddle bridge & proceed as usual. (This is the best thing you can do to improve the remaining sonics of this instrument).

The string height, as you may have guessed, is set by shimming the bolt on neck.

That entire series of Fender acoustics were commercial and 'player' failures.  The only time they were seen is when a Fender endorsed artist was given one for free..... and FORCED to play it.

Good luck with your project.

I have to ask; Is that pickguard REALLY about 1/4 inch thick?

Yes it is and it Is screwed on with 2 screws.

Do you better understand my trashing of these guitars, Ned?

Yeah, but he drove a pink Caddy too.

How can you be a "Bad Boy" in a pink caddy? Now a chopped and dropped Lincoln...

I never liked Fender's acoustics either.

My impression has always been that Leo made his name on electrics because he took the time to understand what makes a good electric guitar and the company put effort into learning how to produce good electrics. As far as I can see, they never really bothered to look at what constitutes a good acoustic.

I think, with my limited knowledge of electric's, that "technology" plays a much larger role in determining what constitutes "good" than it does for acoustic. What I mean is that the parameters that constitute a "good" solid body electric are more easily broken down into subassemblies that have parallel but isolated productions. There's a lot of variation in bridges, tailpieces, pickups, switches, pots...and this site, alone, has an almost constant subcurrent of discussion about these parameters which appears to be a constant in electric circles. It' much like the discussion about "tonewood" associated with acoustics.

All of these parts are discrete components that can be and often are removed and replaced in what I've come to think of as a "dance for perfection" that, I think, is a strong part of the ongoing search for the "best" electric guitar. (Solid core wire, anyone?) You can just about swap any one of these components for a "better quality" product and "improve" the instrument. That's not to downplay the skill required to make a good electric guitar. In fact, I'm in awe that you guys can actually keep it all straight with that bewildering mix available options. What I'm trying to illustrate is that an electric guitar is almost but not quite completely unlike an acoustic in every way.

It seems to me that making a "good" acoustic is more limited in comparison to electrics. One of the results is that I think it's more likely for the properties of a "good" acoustic to be taken for granted because they are more of a magic box to players that haven't put the effort into learning the details and I think it takes a more "schooled" approach to learn what constitutes a "good" acoustic simply because it can't be broken down so easily. Which is why everyone insists on "rosewood" back and sides.  I also think that the component nature of electric guitars more easily lends itself to investigation by neophytes, though they all seem to stall at  "better (fill in the blank) pups".

Leo Fender was an engineer and the component nature of electrics probably appealed to him in a way that the "box of wood" nature of acoustics probably didn't.  Fender never seemed to care about the details of "good" acoustic production, which I think was because electrics were a technology they clearly understood and they saw themselves as an "electric guitar builder". I think that acoustic production was always more about revenue than it was about anything else. They always seemed to treat the acoustic market was a sideline and seemed perfectly willing to prostituted the Fender name in the interest of making money.

Enough meandering. Personally, they were a bit of a rage with my electric playing friends looking for some portability so I was exposed to them quite a bit back then, I never liked them because I never played one that I thought was worth picking up. I stopped even looking at them about 30 years ago.

I really hate to say this for fear of offending one or more of my fellow posters or any possible readers but the idea that someone would pay for an acoustic with a pickguard and bridge like these seems a strong indication to me that they were not knowledgeable enough to be buying an acoustic guitar. (He says, nose firmly stuck in the air.)

I was never, ever tempted by a Fender acoustic which is something I can't even say about Ovation AND I'm stating it as someone that actually liked that Mark series from Gibson.

You should opine like that more often, Ned!  That was all well stated and equally well thought-out.  Bravo.

Thanks, Mike. I always worry that my opinions will offend, particularly when I delve into the arcane world of Electric guitar sorcery. I REALLY don't know how you guy keep it all straight.

I totally agree with you.

However, I have had quite a few Fender acoustics comming through my repair shop and have come across some nice ones in the lower end range.

From top of my head: DG8, DG20 and DG200 were all well made and sounded nice for "budget" guitars. Just as good as Takamine,Yamaha, etc.., in the same price range.

Having said that, I have also seen lots of totally crap Fender acoustics, but they were mostly older ones.