When refretting old fretboards the radius can be dodgy. Not exactly a set measure and it may vary over the fretboard. With a compound fretboard that's the rule! I love the Jaws2 press, but the cauls are firm and don't always follow the shape of the fretboard.

Today I came up with this tweak to a 16" radius brass caul. I made eight cuts almost all the way through the caul with a small metal saw to make nine somewhat movable parts (with the set screw on flat metal in the middle). To make it even more bendable I drilled a 3 mm hole in the end of the cut. To give the caul a chance to bend in the Jaws2 tool I put a shim of a soft but hard enough material in the bottom of the groove for the caul. I tried cork and it worked, but settled for raw rubber from the yoga mat I have on my bench. An old fretboard with 7.25" radius was used as an example. 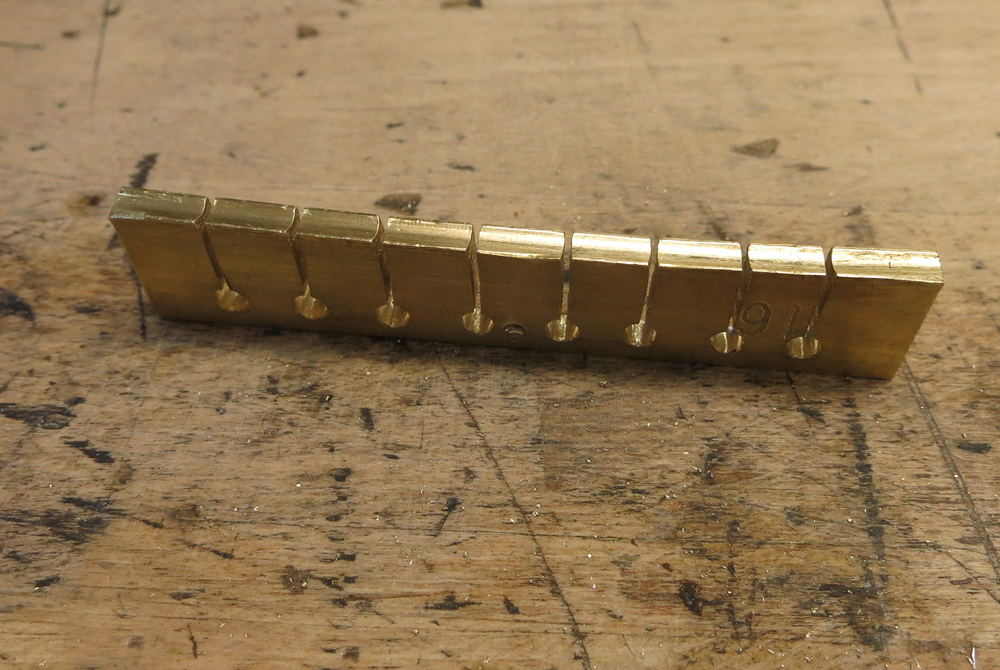 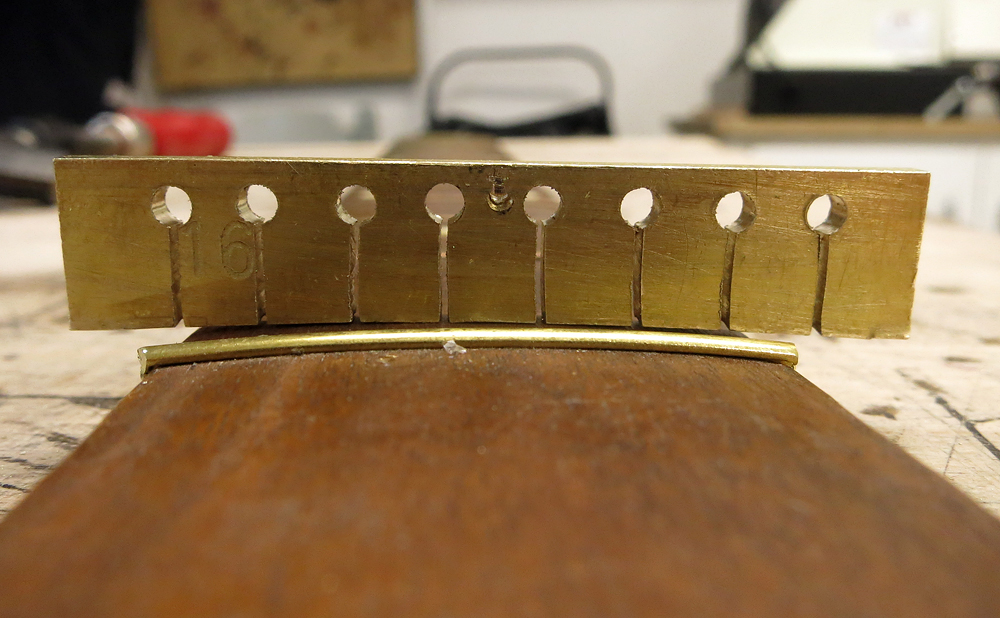 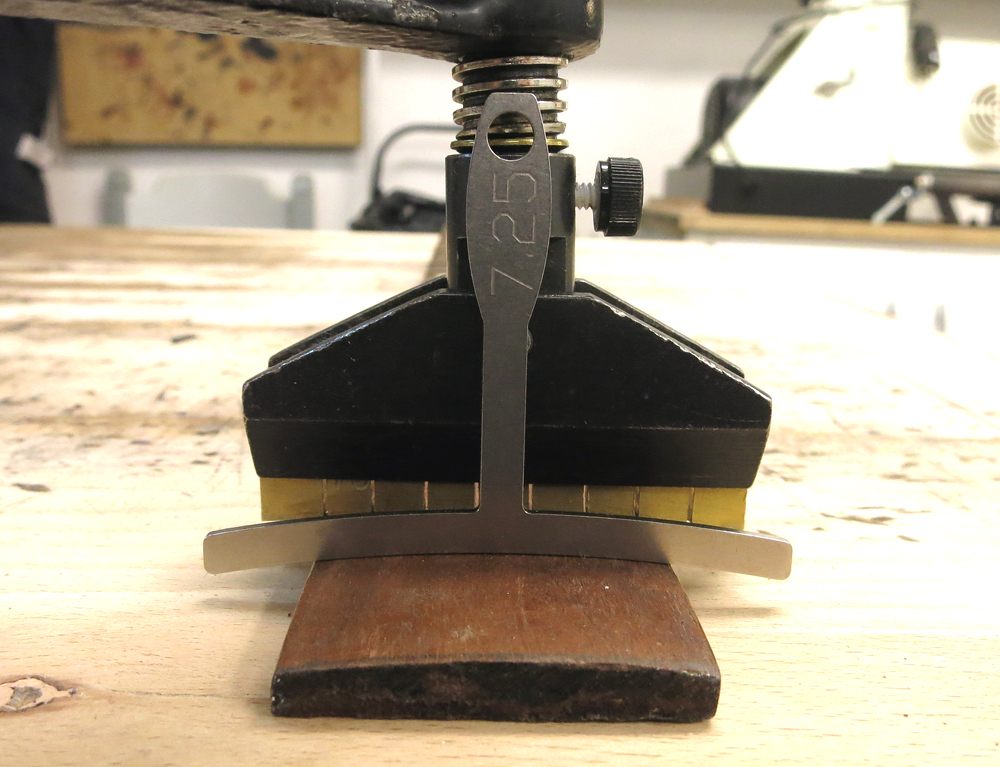 The fret is pressed relly tight with normal force. The caul forms itself to the fretboard radius. 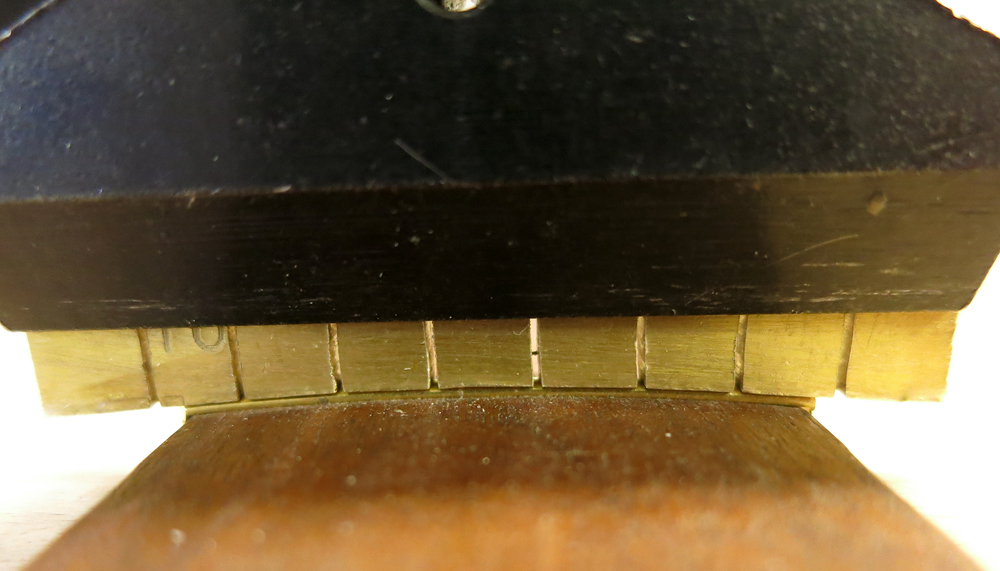 Here is the soft shim under the brass caul (cork and yoga mat). The set screw shall be loose and only as tight it needs to be to keep the caul in place, it has to be movable. 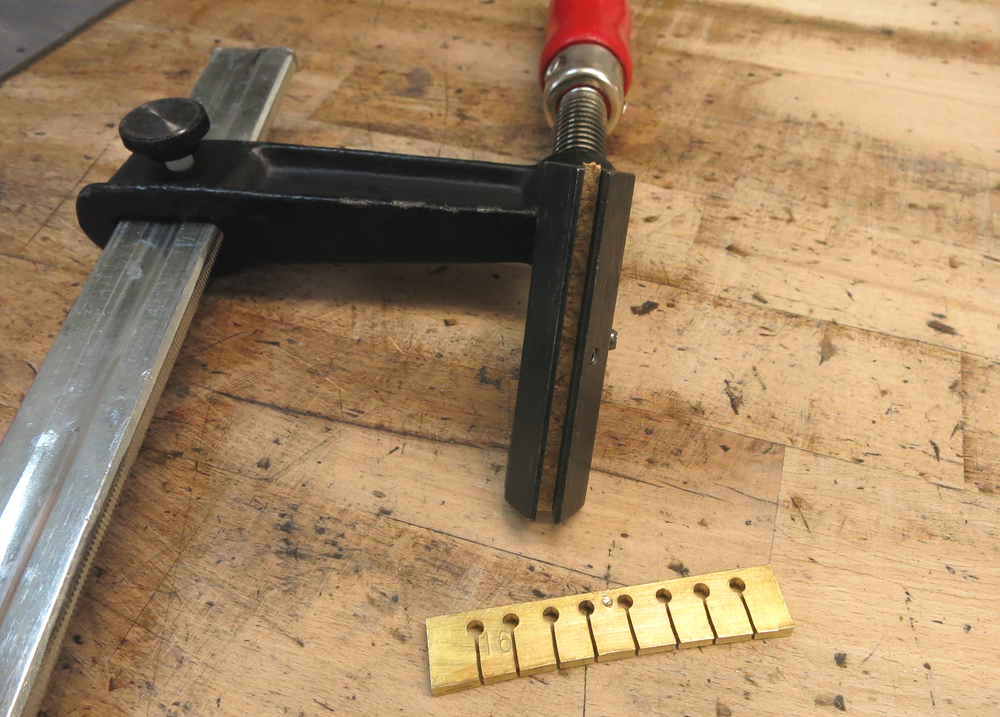 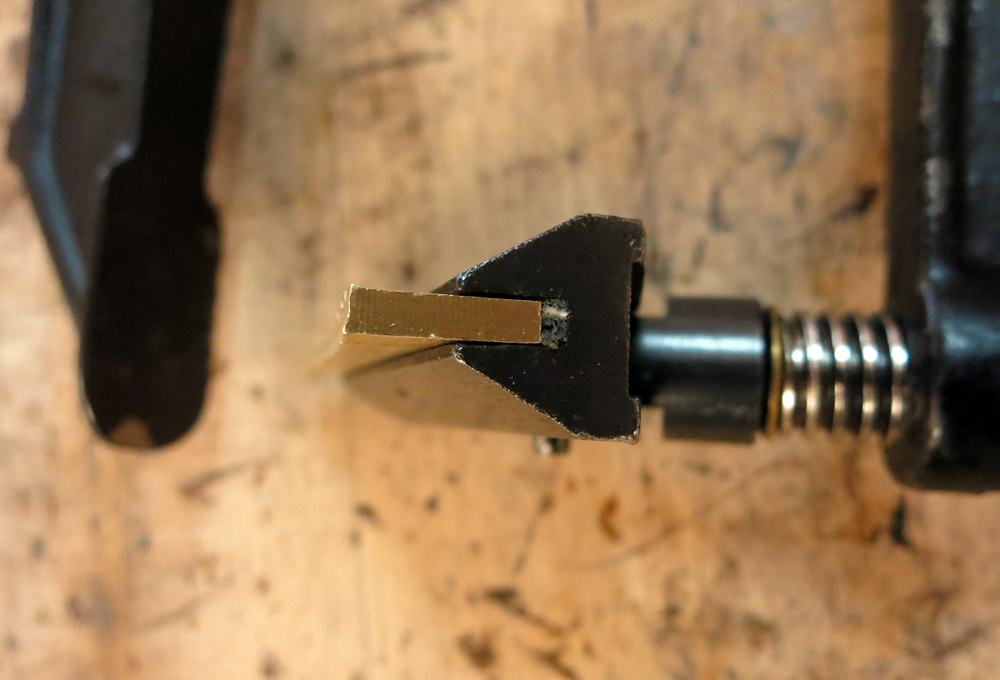 Will be using this from now on. I'll do the same for a 20" caul and that's probably all the radius cauls I will ever need for all the different radius variants :-) 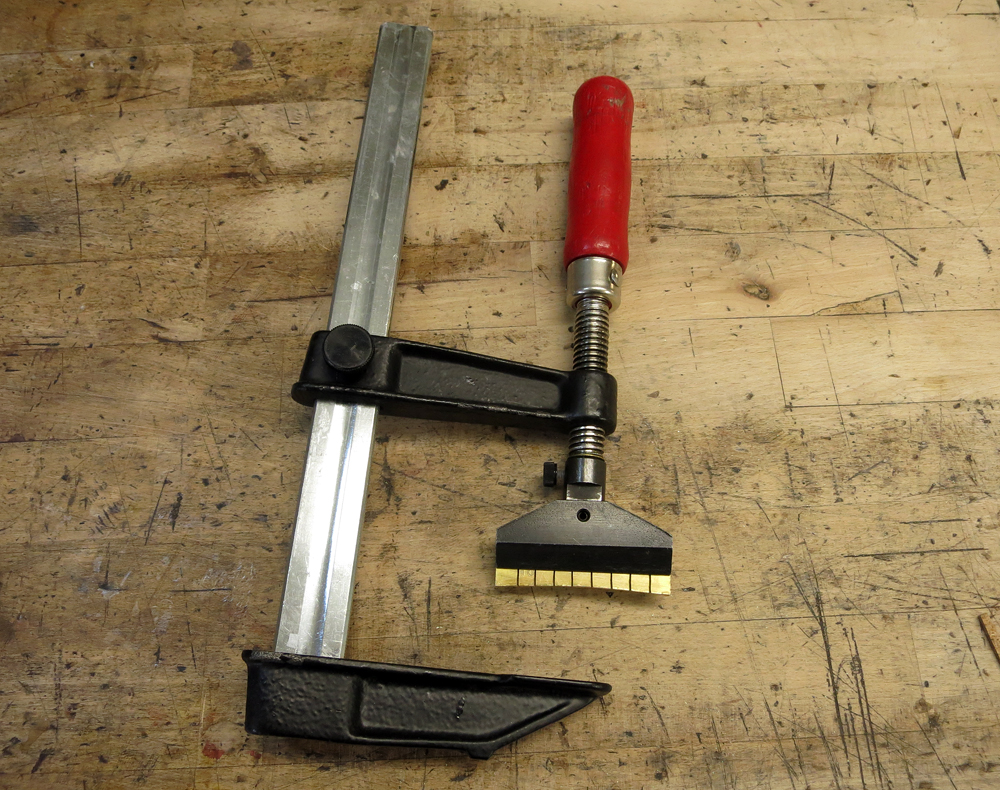 Nice...  a good example of outside-the-box thinking!  Great pictures, too.

Bloody brilliant, this is... Thanks for posting this...

My intention for this was to make better seated frets, not that old "here is a cheap thing to replace all that expensive stuff" trick. The best way is to start with something in the ballpark for the radius of the fretboard even if my extreme example have 7.25" and 16" on the fretboard and caul and did a good enough job. It only takes about 15 minutes to do the job, I have all the different sizes and I did it to some more of them today and will do it on all of them. With a compound radius you may have to change the caul once or twice.

One thing I forgot to mention is that brass is sensitive for bending and cracks easily when bending to and forth. The holes distributes the load and will prevent this to happen. The same way that windows in planes never have angular corners anymore.

Some slides from the production line. The saw blade is 0.5 mm thick :-) 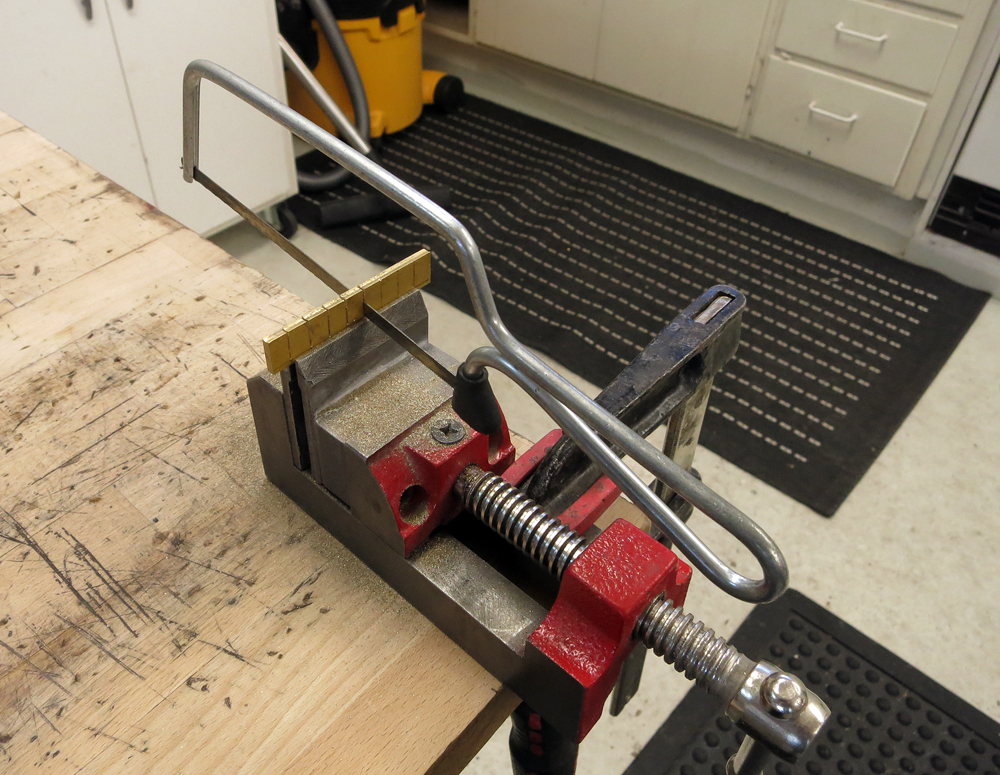 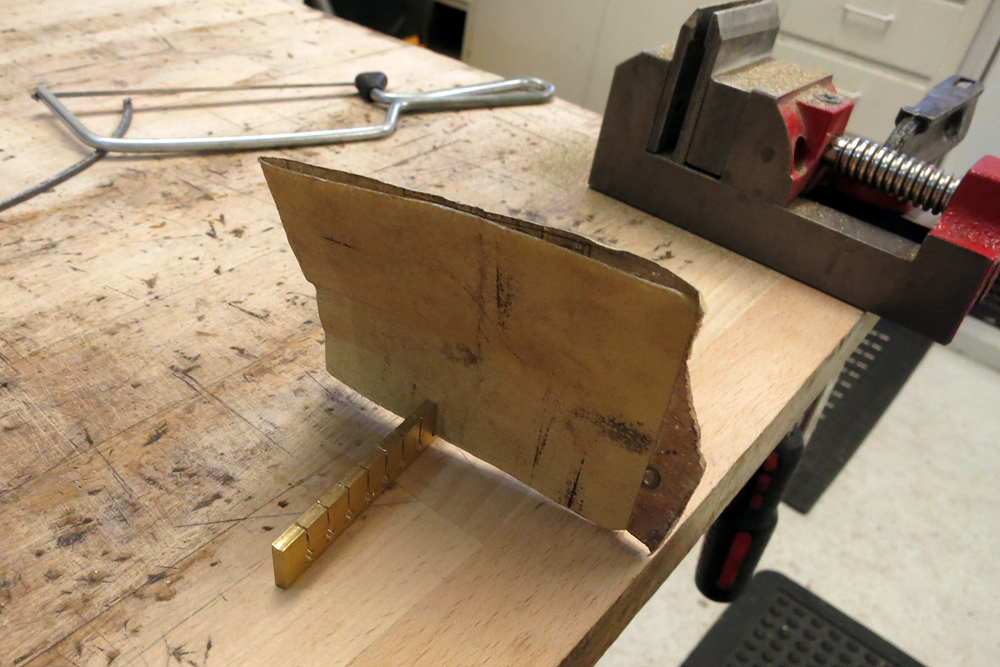 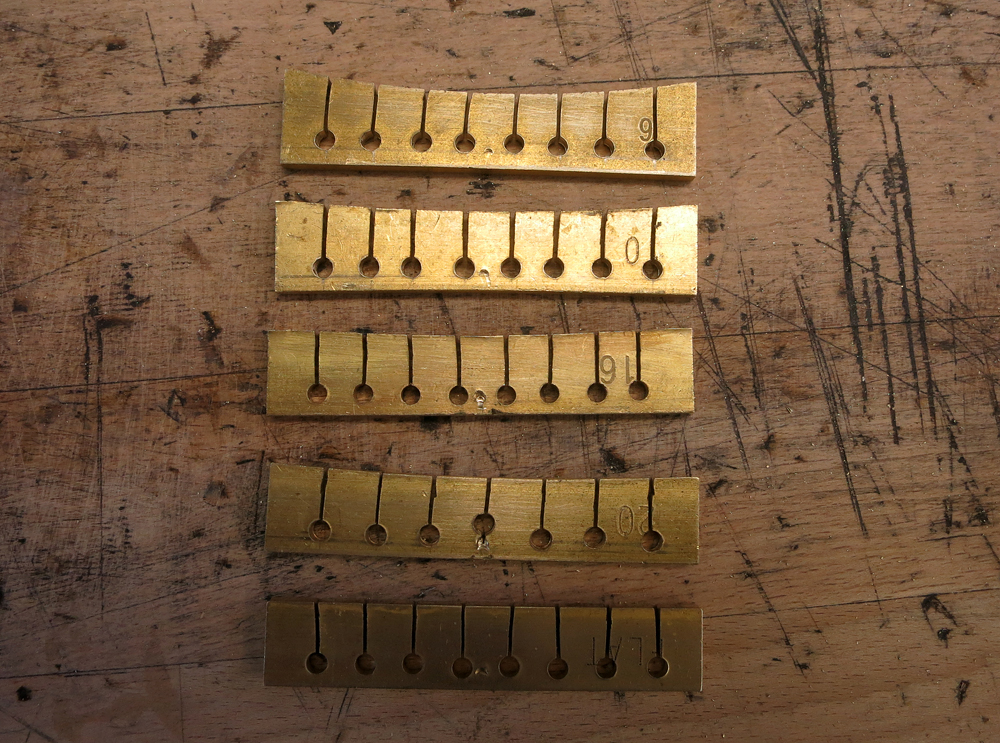 Very clever, Roger. I've often wished that Stew Mac would offer in-between radus cauls for compound radius boards. I guess this is the next best thing. For boards with a consistent radius, I always true up the radius and plane of the board* so the frets always press in nicely with no gaps. For compound radius, i usually just tap the frets in with a hammer.

*except sometimes I'll forgo truing up the fingerboard if it has a finish on it - assuming the board is close to being level and the radius is relatively consistent.

Thanks. When doing a compound fretboard my guess is that not every fret will follow a perfect radius circle. The flexible caul can cope with that. The fret will be seated close to the shape of the board, so the board better be nicely shaped :-)

A compound radius fretboard is just as "circular" as a fixed radius fb. It's just that the radius is constantly increasing the farther away you get from the nut.

>> With a compound radius you may have to change the caul once or twice.

Yes, in theory all the frets will be perfectly circular ;-) A fixed up 14" caul would be the ticket.

Tried it out, the not so good 20" one. Turned out great! Probably the best fitting frets on an old not so perfect fretboard I've done. Some slides from the action.

I use a "plank jig" when fretting old parlor guitars. The trouble frets near the heel is no trouble at all. Just two frets are sometimes difficult, the one close to the edge of the neck block and the very last one on a small parlor - the clamp sometimes hits the back edge of the soundhole. Everything is done the same way until I hit the frets passing the neck block. No risk to scar the back of the neck. I use 20 superglue for the frets and to speed things up a couple of aluminium bars to keep the pressure on the frets when moving on to the next.

I think I will modify the Jaws2 and make the slot deeper for the brass caul. To make more room for the shim. No biggie. 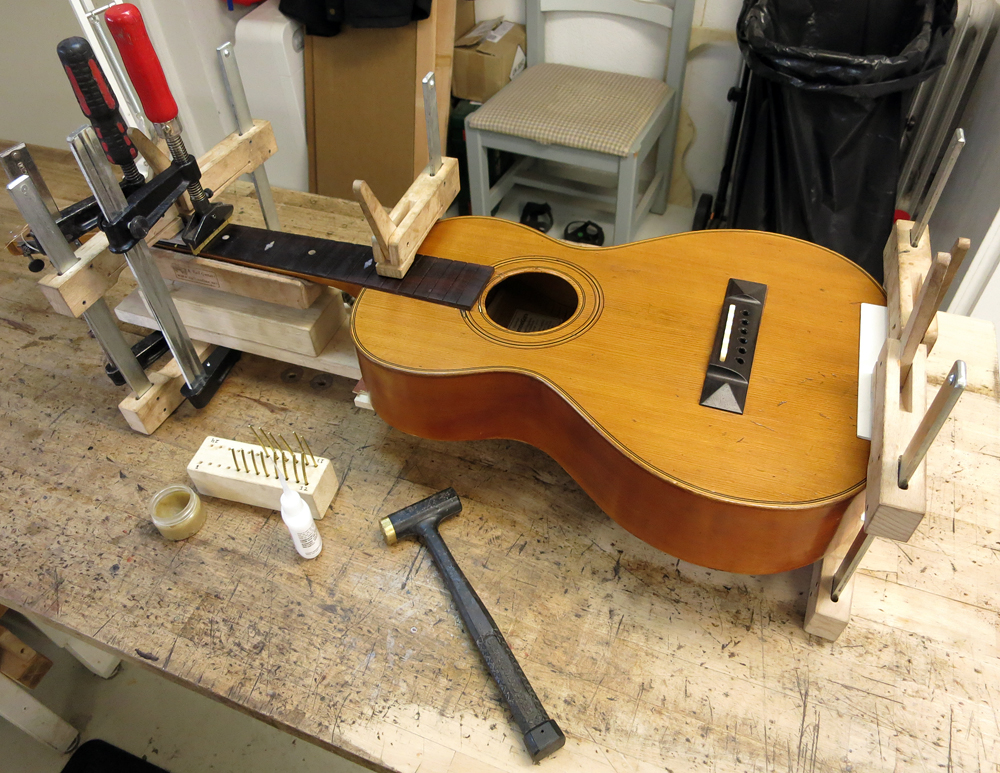 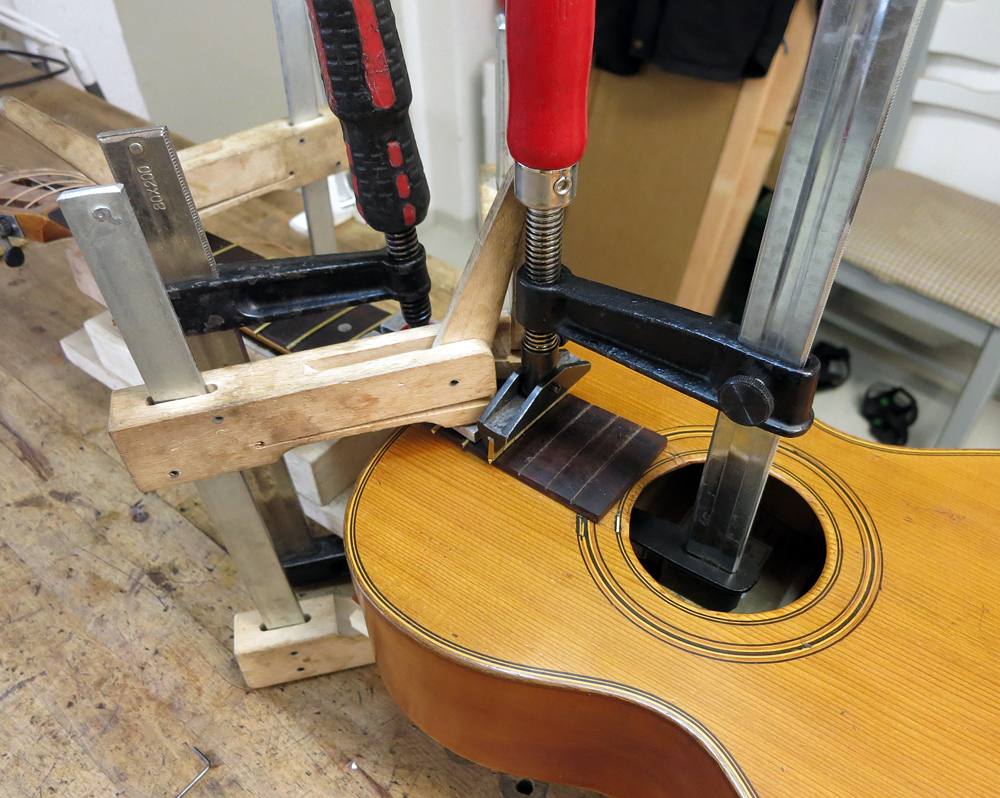 Made an adjustable thing for the neck support. Some furniture feets and screw inserts in the wood block. 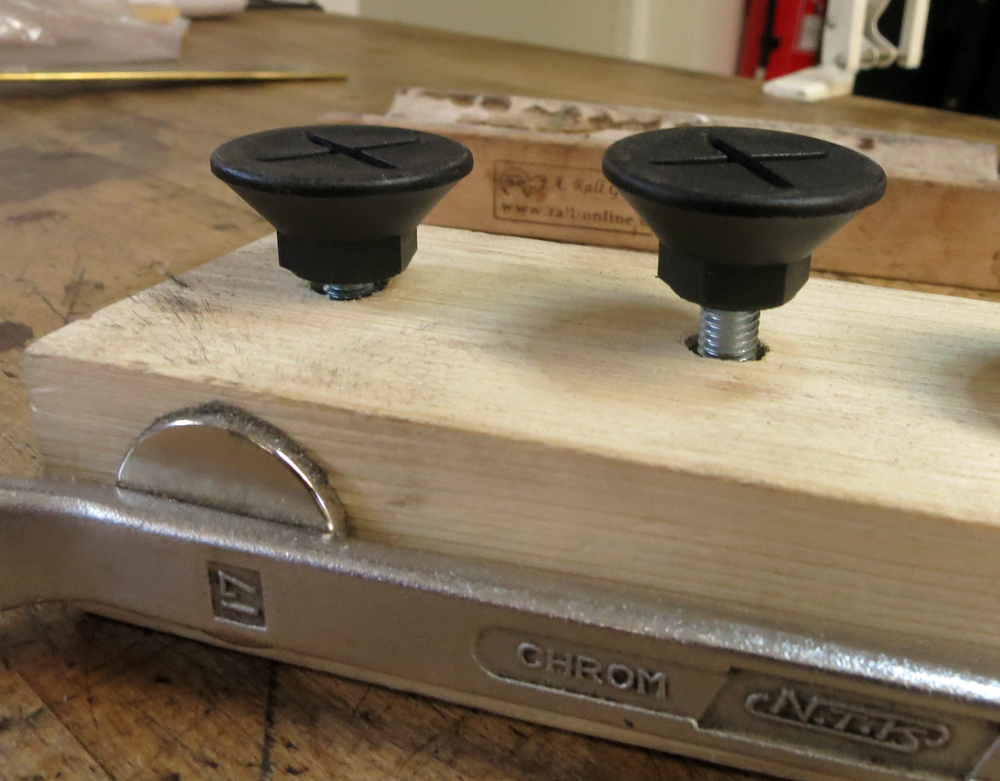 Both David Farmer and Dave Collins have worked hard on a one-size-fits-all adjustable caul.  Hopefully David Farmer will weigh in.

The issue that we keep running into is the same issue that you, Roger, ran into.  One size can only be made to do additional radius that is larger, not smaller and even then it only goes so far and you still need multiple cauls.

If I am reading your post correctly you made multiple cauls for exactly this reason?

This would never work for us and we shelved the idea for now because we also need cauls for banjos and mandos and compound radius boards.

This caul set builds on a caul set that used to be available from John Watkins but was not available for nearly ten years.  Dave Collins worked with Andy to define what cauls will be in the set so that the most useful cauls are in the set for guitars, mandos and banjos.  Again we could not get a self-adjusting caul to work flawlessly for all of our uses.

What you came up with Roger is going to suffer from some of the same issues that our's did and that's why we went the other route and instead use multiple cauls so a single caul does not have to do many things lousy.  One of the issues was slot tightness.

Compression fretting requires us to press frets at times that are too snug for the slots but that's how compression fretting works.  The backing to your cauls that conforms will have an issue with this situation and again you need multiple cauls any way for a full range.

Hopefully David Farmer will weigh-in here too because his take on an adjustable caul is the best that we've seen yet.  I do believe that David has posted on this here before too.

The real trick here and what you have not solved yet either even though this is a good effort is to have the backing material behind the caul be infinitely conformable but rock solid once it conforms.  I considered using hydraulics for this and that's a design that I've been kicking around in my head for a couple of years.  Fluid as we know with hydraulics will resist compression enough to create a rock solid backing for a self conforming caul so that it pushes with the same degree of force over it's entire length.  That's the trick that these seem to need to do.

Are we over thinking this?  Likely but that's what we Luthiers who toil by candle light with sharp chisel in hand do....:)

Interesting! Lots of caul changing though.

Yes, I know that what I've come up with is not the best possible design. But since I'm not planning to make a tool and sell, perfection is not what I'm after. The problem is the flexible but still rock hard material that should be under the flexible caul. Hydraulic sounds great, maybe many really hard springs or something like that.

Given the stuff I have to work with and what I actually need this is good enough for me. One big step towards better fret setting with a small amount of work on the standard Stewmac tool! With a small difference in the radius of the caul and fretboard the uneven pressure will be as small as possible. I have all the standard cauls, I will do this to every one and select the matching one as before, but get better results :-)

I had no idea this set existed, but more times than I could count, I've wished that Stew Mac would sell the in-between radii - like 8", 11", 12", 13", 17", etc.. Just that would've been great, but I'm almost wondering if the "Ultimate" fretting caul set has too many sizes. I might wind up spending more time scrutinizing which caul to use than actually pressing frets in. That said, I'm impressed and I am going to buy that set of cauls, and I'll just have to deal with the problem of having too many choices.Thanks for posting that!

Just an afterthought - you rekon Andy could machine a set of radius gauges which would coincide with the radii of the cauls in the set? That would be helpful for choosing which caul to use.

Maybe contact Andy and tell him that Hesh sent you.  I was the one who approached Andy on this caul set in the first place so I know that he's very open to ideas that work for all concerned.  Andy lives about an hour away from us.

He had some talk of offering a smaller set but I don't want to push the idea with him because something like this only has a very small lifetime market to address and we are lucky to have Andy's offering as it is.  Making Lutherie tools for resale can be a thankless business....

I'll add that for bound boards a slightly over radius caul helps nail the ends.  We glue with CA but with the caul and clamp in place and then we accelerate in the direction of the last fret glued so as to not contaminate the next fret to be glued.  Super thin CA wicks into the slot and up the other side and holds very well for us.

We are also waxing the boards with Howard's first and then the excess CA wipes right up.