Sorry to hear of his passing.... a true originator and a fine craftsman. 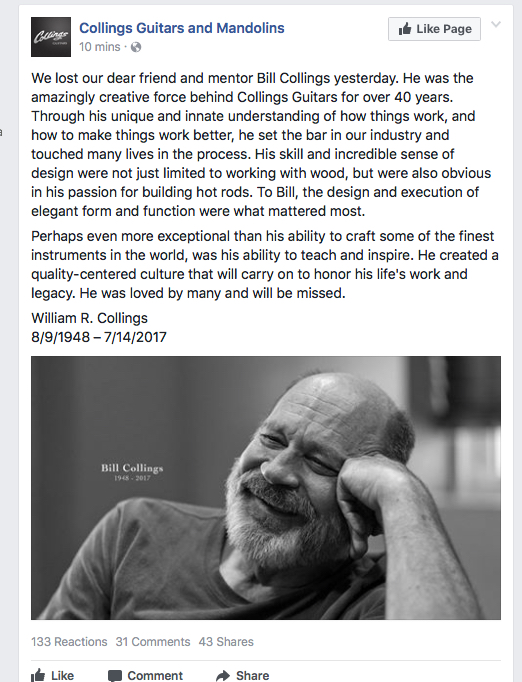 Sad.  Collings are, imo, the finest instruments made.  He took existing shapes and made them sound like they should have.

We'll all miss Bill - one of the most colorful characters in our industry, and one of the smartest, too.  I never met a luthier or factory guitar builder who listened more attentively to criticism, acted on it where necessary, and saw to it his work was always right at the top of the craft.

Bill's appreciation for the great vintage instruments was genuine, and he made it clear they were his inspiration  as he designed, developed and produced some of the best guitars we've had the pleasure of playing.   I'm certain we all hope his talented and dedicated team in Austin can carry the torch from here. . .

It's hard to Imagine Collings guitars without Bill himself. the number of people he influenced must be gigantic.

Below is a copy of something I posted on another forum:

Heartbreaking.
One of the most vibrant, and alive people I've ever worked with.
I always thought I'd see him again.
I only worked at Collings guitars for a few years but Bill's influence on how I go about things is huge. Almost anyone who worked there will have many"Bill stories".

One day I finished binding a spectacular, Blond, birdseye F mando. Probably one of the first 20 F's built there. I still have a few off-cuts from it in a scrap box I occasionally marvel at. I never really got attached to the many instruments I worked on but I mentioned to him in passing that the blond birds eye struck me as truly spectacular, I really loved that thing. I made sure the binding miters were perfect! No place to hide on a blond. The next day he and my co-worker came through the door in the mandolin shop carrying it and holding it up to the light, grim consternation on their faces. What? I said with growing panic. They continued to talk quietly about how impossible a fix would be so I shot up and went over to see a huge, gruesome, black gap at one of the miters! As the blood drained from my face Bill and Scott busted into howling laughter.
Hearing me articulate a rare attachment to an instrument, Bill had grabbed it from the finish booth and drawn a big, black, sharpie line right across the joint, just to mess with me. He absolutely loved that kind of prank.

Such a complicated man. After few months there, I told my wife, " any day could be my last". Each day I'd come home and give her," the Bill report". Interaction with him determined what my days were like. Good and bad. He could be incredibly warm, charitable, fun, and brilliant. He could also be harsh, impatient, and juvenile. Blunt, honest and wild was the only way he knew how to be.

I was lamenting just yesterday that Collings is one of the only companies that seems to have gotten the balance right. Almost all my current repair work seems to be either crazy cheap instruments where there was no time to get things right, or extremely expensive hand made instruments where the builders would never be able to build enough instruments to learn and work out all the bugs. ("hippies in the grass with their 600 grit" as Bill liked to refer to them)

Working with Bill was like hanging onto superman's cape while he swatted at you with a broom stick.
He said to me once, "you know how you can spend weeks or months screwing around and putting off writing a term paper for college and then bust the whole thing out in the last few hours before the deadline? I try to just go straight to those last few hours and work like that all the time."
He pretty much did.
A larger than life character for sure. Especially in my life.

The passing of one of the greats, one can only hope that we are revered and remembered with such passion when we move on.   His legacy is assured by what he has done and those who follow in his large footsteps.  Thank you David for a fine (forum) eulogy.

Rusty and the crew.