Hi all,I'm wondering what method you would recommend for levelling a compound radius.

Seems to be a few.

Any thought on this method:

Permalink Reply by John Henderson on May 3, 2011 at 5:09pm
I meant to say FRET levelling a compound radius.

Guess I've never run into an instrument with more than one radius, if that is what the term means. I've never see an instrument that may have a 16 radius at fret one and gradually changes to a 20 radius at the end of the fretboard.

I personally see no reason for more than one radius on a fretboard.

Sorry, I didn't answer your question, but I've never had to deal with a compound radius personally.

Jim, the majority of top end electric guitars have compound radius fingerboards 9.5 to 12/14" and 12 to 16" are common sorts of variations.   The reason they are used it facilitate multi-step bending in the higher fret areas, where you are bending a straight edge (the string) over a cylindrical section (the frets) - without a flatter radius you will fret-out the strings, particularly if you have a lower action.  The use of a tighter radius on the lower frets is to make the chording and general chord playing in that area more comfortable.  There are some other issues, I recall, but I forget them at the moment.

An alternative to compounding is to incorporate a little "drop away" from 12/15 fret to the 22/24 fret which effectively makes the action a little higher in that area due to the relatively higher angle of the stings to the bridge as the fret number increases past mid scale/ fingerboard relief apex.

Most luthiers generally provide a bit of compounding or drop-away within the boundaries of the frets during fret leveling and recrowning, and with 7.5" radius Fenders it's almost mandatory.


To level a compound neck is a good exercise in eyeball luthiery, a flat jigged neck and using a long section sanding beam to follow the conical generatrixes mentioned by Pierre-Antoine (basically you stay parallel to the conical section from an imaginary point back at the point of the extended cone formed by the compound radius) - think of it an an infinite number of centerlines spreading out from a distant point to the full width of the conical section generated by the fingerboard compound curve. Clear as midnight that bit, eh.

The idea is that if the fretboard is tapered in width, as almost all are, an ideal action cannot be achieved by imposing a cylindrical surface on to the board's playing surface.  It "ideally" should be a conic surface of the same taper, but that is not optimum if strings are to be pushed to the side when bending a note.  The perfect conic surface also does not allow relief for the curvature of the string's vibration envelope.  In practice, the conic surface described by the frets can have a greater taper than that of the board width, creating some fall-away at the higher frets.

I always build with a compound radius.  On electric guitars, I additionally add some fall-away over the central area of the board in the higher fret range where players tend to do a lot of their bends.  I don't use a long beam as Rusty describes above; I've used 10" mill files for many years and find that they allow me to make the deviations from a perfect conic surface that IMO optimize playability.  I would expect that Rusty does the same thing with a longer tool.  One gets used to a certain tool and its necessary techniques.

I'd add that the actual difference in fret heights between a cylindrical playing surface and a conical one on a tapered board is very small; a matter of a few thousandths of an inch.  Most acoustic players would have trouble noticing it.

As Rusty said, the basic technique is to run your leveling tool along the various center lines of the conic surface.  The strings more or less follow such lines.

Permalink Reply by Pierre-Antoine Roiron on May 4, 2011 at 12:13am
I use a straight flat block with sandpaper, with long strokes following the conical generatrixes.

Permalink Reply by FRANK on May 4, 2011 at 7:21am
ha you guys talking about stroking it . so yea flat block is good and so then I get the neck totally straight as possible . to later during the string set up to bump the t rod a bit one way adding the relief I also lean the neck back a touch in the pocket and even have even sanded ramp before who really knows id like to have a few Cheap guitars around to experiment with a so called fret shoot out knowing is half the battle . 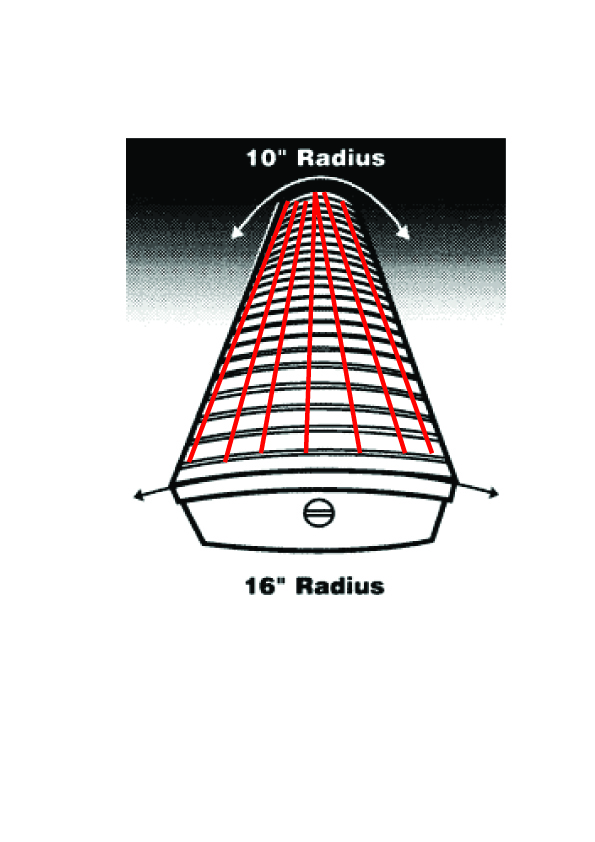 Can;t see any rhyme or reason in rubbing it in circles like in that video.