I'm new here (in case y'all couldn't tell) and I have a pretty in depth repair question, but before I jump in - since I know from reading other posts that it will get asked- I'll give you a little background so you can judge my experience level.

My brother and I started to get interested in building instruments about 6 years ago. My brother (14 at that point) really wanted to build a guitar, and finished it before he was 16, during which time I got to really wanting to build a mandolin.. But before that the Michael Kelly that I had bought with a broken, and non-professionally (carefully, but non-professionally) repaired neck brake needed to be fixed. It was a pretty typical peghead break from being dropped. My brother and I cleaned it up a bit, glued up the crack, scraped off the back of the headstock and added a backstrap to cover the area, and fixed up the finish. Thankfully all went well, and we ended up with a good mandolin with not really any obvious damage. Then the build was on. And believe me I had been thoroughly bitten by the 'build bug'. We had the "How to build a Bluegrass mandolin" book by Roger Siminoff, I wasn’t really up to starting out with an F style, so my brother and I altered the plans in the book, and built a two-point. Nontraditional, but classy. The first couple pictures are of this, my first build, and obviously since it was an original design, it was all from scratch (no pre-made parts).I finished this by my 16th birthday, and was ready to build another. However, because of extenuating family circumstances, I was not able to start another right away. I just turned 18, and am currently building an F style, I have the top and back carved, the rim mostly done, and the neck cut out with a little carving done on it. But ever since I saw Frets.com and saw FF’s amazing repair work, I have, of course been inspired to do repair work.

OK, so I feel as if I have just written an entire book of personal history, sorry if that bored you, but at least you all know something about me now.

The only problem was that I didn't have anything to repair.Then I came across someone with this mandolin that had 'health issues'. It had a fairly significant crack in the top, about 6 and a half inches long and 'displaced' or whatever you want to call it, i.e. one side on top of the other. Without being able to see inside (no mirror) or feel the area, it seemed like a matter of fixing the crack, and probably regluing a brace. However it quickly became apparent that there were some significant issues, such as a poor bracing plan. I asked if I could take it home, and made sure that it didn't have sentimental value and that they hadn't paid much for it. As you can see from the pics it is a non traditional design, and I have not been able to figure out much about the builder. They bought it in the Omaha, Nebraska area off craigslist, and don't really know who built it. It has some really odd things about it, such as the bracing pattern, the neck block and all the braces are mahogany.
But there are some things that indicate some knowledge, such as radiused top and back plates, a really good binding job and finish work. So go figure.

I removed the neck, binding around the top (which came off beautifully) and the top, which came off not-quite-so beautifully. But I am kind of drawing a blank for a new bracing plan. So far the options that I see are:

The X brace with the joint being under the center of the bridge, and some sort of a bridge plate situation, such as those seen on classical guitars

OK, this is approaching novel proportions so I'll stop here.

Thanks in advance and happy repairs to you all 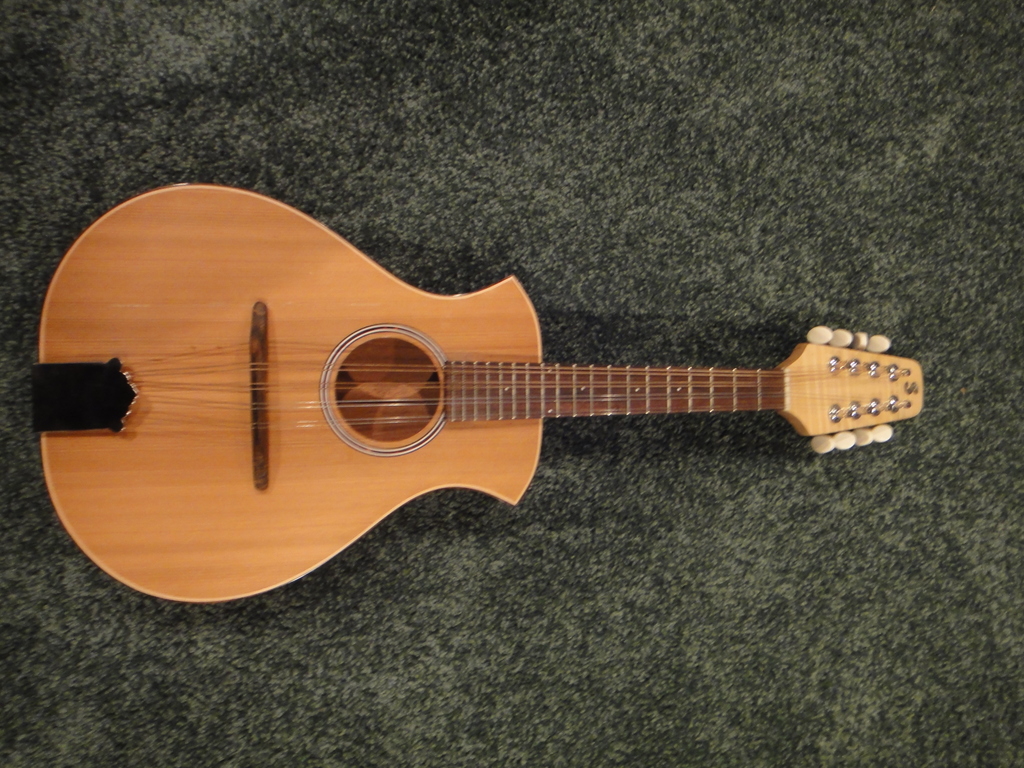 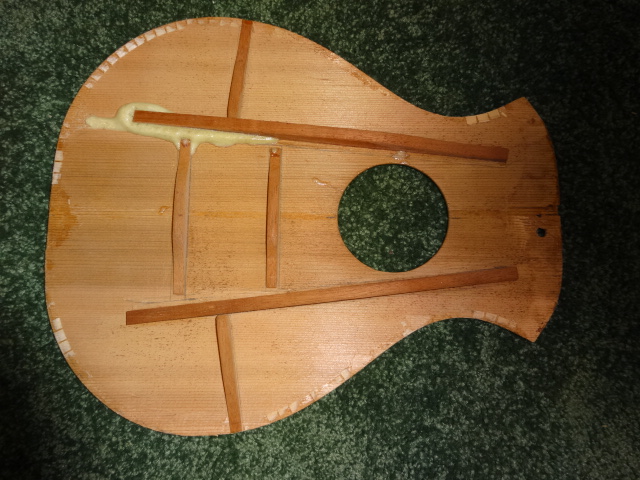 Obviously, there has been a former repair, ( with gorilla glue) and the there is the same problem on the other side, the longitudinal brace is coming off from the end about to the crosswise brace going toward the side.

Looks like someone got a hold of a body from an old Supertone made in the '20s or '30s and fit a new neck to it. The body could be a newer build based on those old models but the bracing looks like it's fairly old too. Does there seem to be any signs of a large round label that would have been attached to the inside of the back? That would probably have been a Supertone label.

LIke a lot of people, I think this is a cool look for a flat top mandolin but I understand that a lot of these self distructed because of the stress on the neck block and the fingerboard extension but I heard of some that were repaired with a cross brace under the FB extension and a neck reset.  I think the bridge position may be a problem too if it not fairly close to one of the cross braces but other than that, I"m not sure you actually need to change the bracing design. The gorilla glue has to go ( have fun and good luck) and the misaligned crack must be repaired but, If it were mine, I don't know that I'd actually change the bracing design.

BTW, I'm totally impressed with you and your brother. I was about your age when I started getting involved but I didn't try anything like what you have each done until I was much older. Good show.  Just so you know, there is a mix of hobbyist and professionals in the boards. I"m a member of the hobbyist group too. It's a great hobby.

Looks like this might be a MusicMakers kit from a few years ago. If it's not, it's close...

Thanks for the responses guys!

There doesn't seem to be any evidence of a label. I am pretty convinced that it is a private build, but it definitely seems to be heavily influenced by the old supertones - thanks for that tidbit, I didn't know anything about those! One reason I have come to this conclusion is the choice of wood - it looks to me like wenge for the back and sides, redwood top, and bocote binding. and you can see on the picture of the bracing that there are a lot of pencil lines for placing the braces, but they weren't real precise. 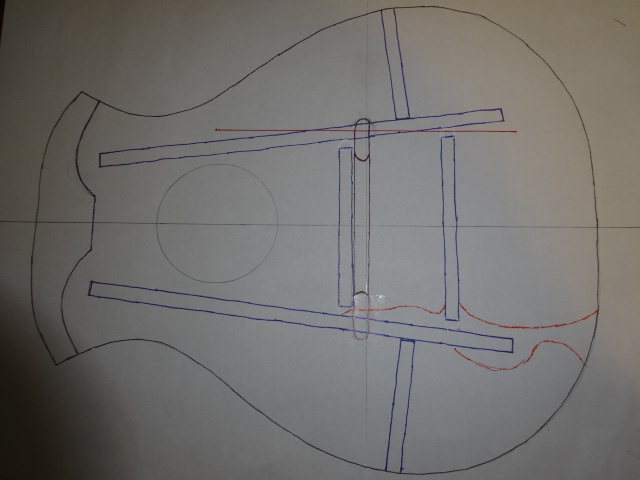 you can see in this picture that the longitudinal brace on the bass side is coming off all the way to where the bridge sits, and the same thing clearly happened on the treble side, which is why I think that the bracing is faulty and if I just glue it back on it will have the same problem. none of the braces are coupled together, and the ones going off to the sides are only loosely notched into the sides, so they are not really working together hardly at all. The upside is that it has no issues near the fingerboard extension, so the bracing pattern has worked well for that.

It looks pretty similar to the MusicMakers kit.  But their (current) mando bracing pattern visible on their website here is an X-brace.  So if it is an MM kit, they've changed their design - and maybe that's a clue.  Possibly worth dropping a mail to MM?