“Pam” came into my life quite a few years ago when a local violin maker offered her to me in pieces.  It was a project he had planned on doing for years, but never got around to.  She got her name for the woman who it is being restored for.  Her namesake saw this hanging in the shop in it's derelict state and asked me to resort it and sell it to her.

Pam is a small bodied Washburn Parlor guitar with an oval black and white label which dates it to the 1903-07 era.  The details of construction and decoration (Brazilian Rosewod back and sides, spruce top, white celluloid with rope style marquetry on the top, binding on the top and back, Pearl dots at 5th, 7th and 9th frets, three rings around the sound hole and body dimensions) suggest that it might be a 115 Model though there are no model numbers on the guitar.  A faint in stamp on the label partially reads “Style” but the remainder is no longer readable. 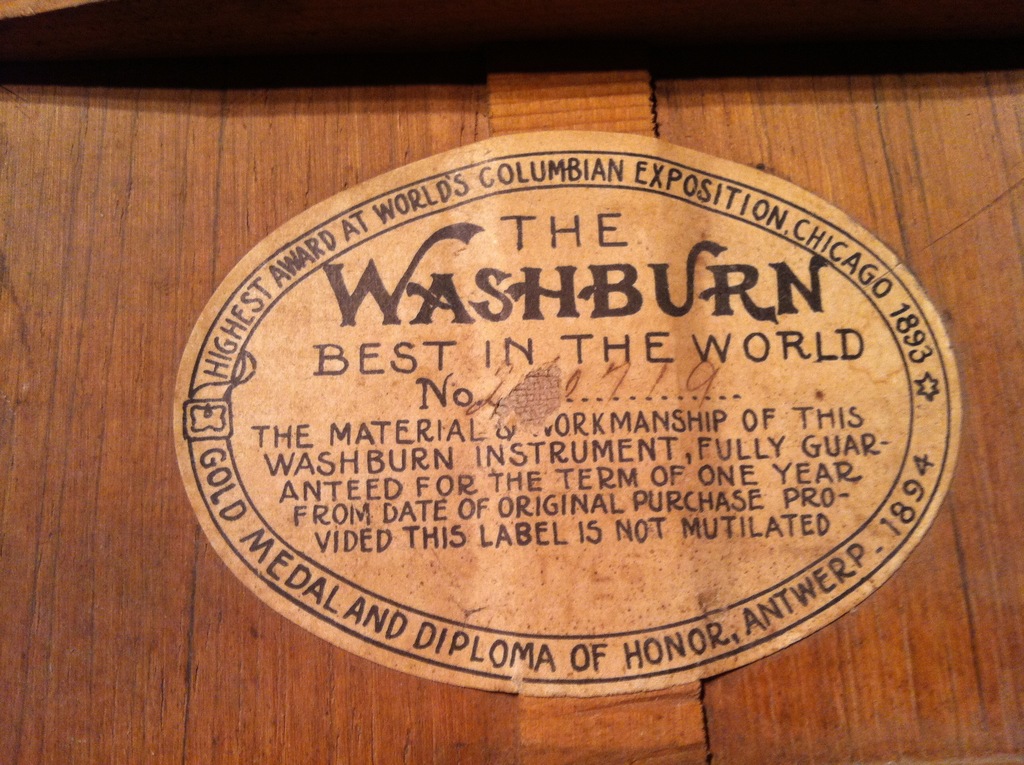 When I got Pam, her back was off, she had numerous splits in the rosewood back and sides,  some quite  severe, and several serious cracks in the top.  A section of binding was missing from the top and the entire back binding was missing. 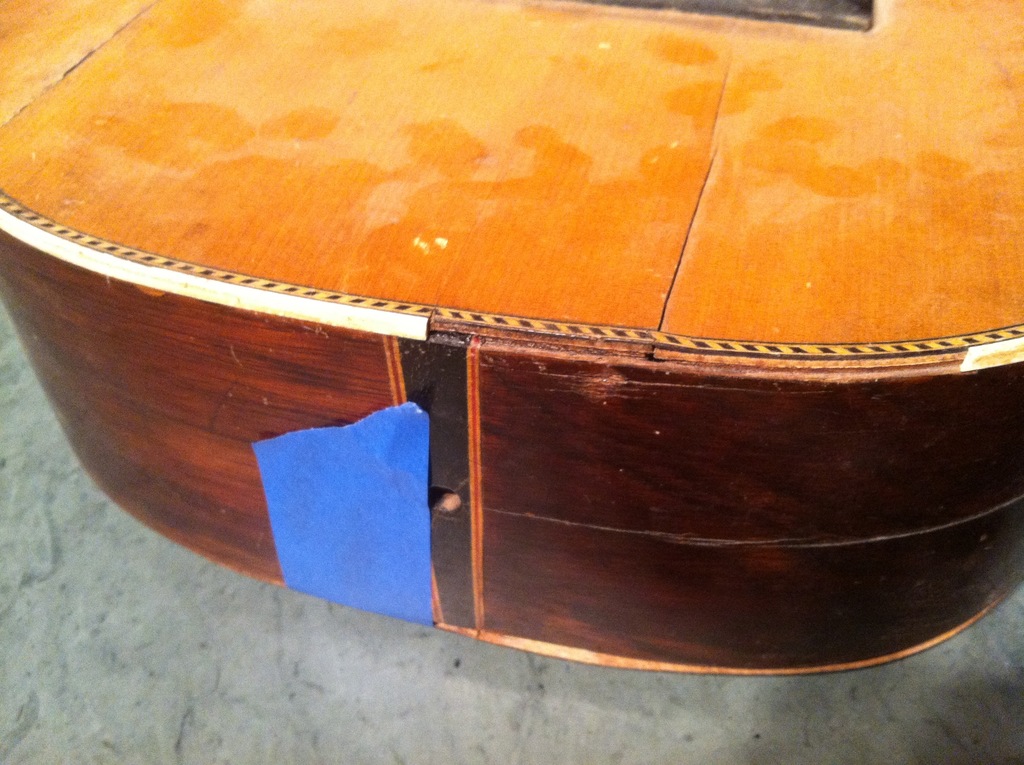 I splinted the face cracks with new spruce (inlaid spruce into the cracks that were too wide to close).  Pam’s original tuners were damaged and she had been over sprayed with some form of clear finish. Pam had a very basic and somewhat beefy ladder style bracing on the top and the bridge was split. 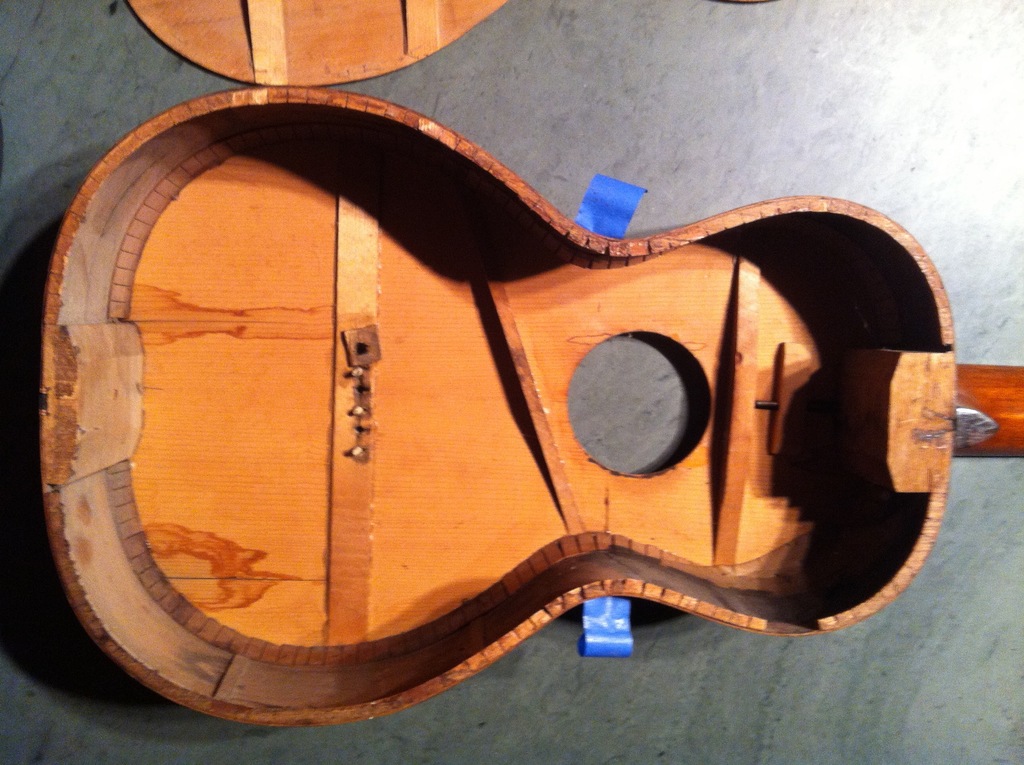 After dealing with the structural repairs to the cracks, I decided to go ahead and re-brace the guitar to an X brace pattern.  I had previously restored  an X braced 1897 Style Washburn 145, so I re-created the original scalloped X bracing pattern from that guitar.  With X bracing and a new bridge plate, the guitar would be fine for light gauge steel strings. 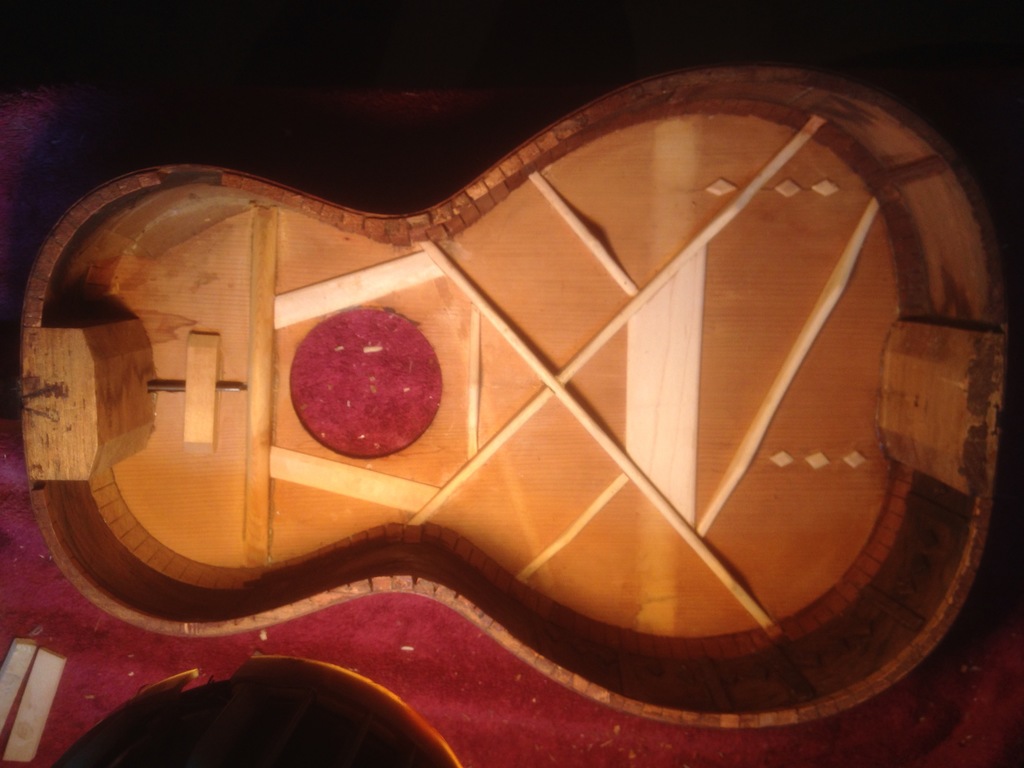 I also thinned the back braces to lighten their mass while keeping the structural integrity. Many early Washburn’s have a steel bar running through their necks and PAM was one of  those.  This greatly reduces the amount of bending their necks end up with and though I did re-set Pam’s neck, I didn’t need to remove much material at all to get the correct angle.

Once Pam was re-braced and all the structural work was done, I re-glued the back and rebound it with historically accurate cellulose binding. 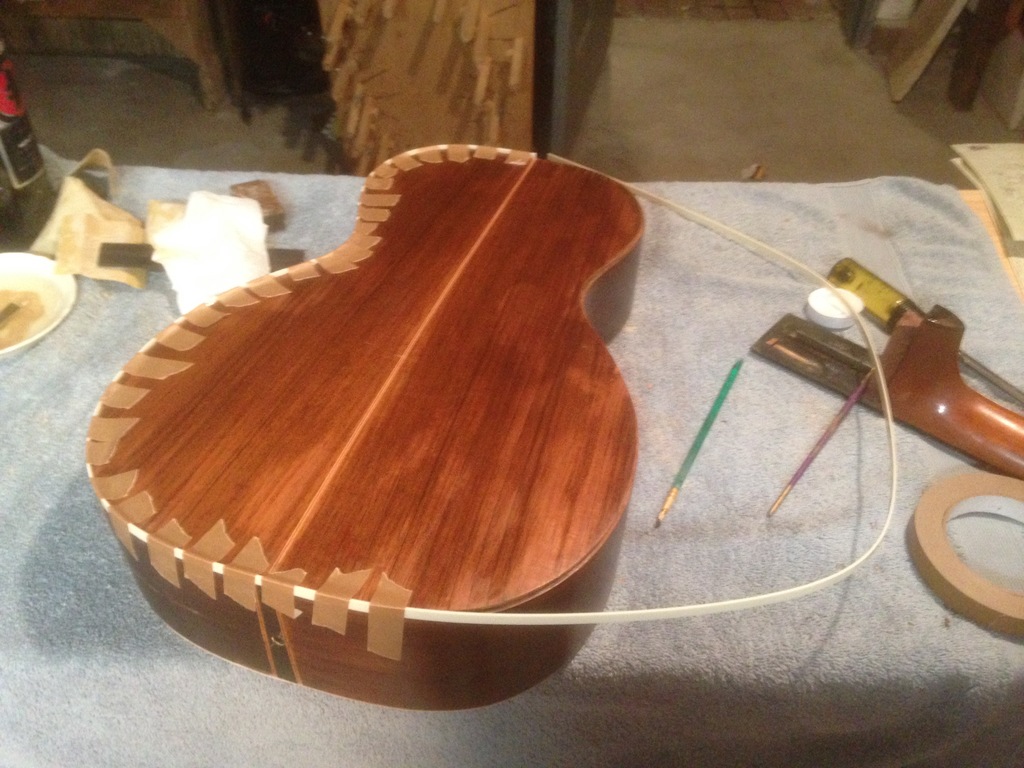 I did a fine sanding to remove the overspray, but was able to keep what remained of the original finish intact.  I drop filled damaged areas of the finish then hand applied a French Polish to the entire guitar (the original finish material).  I did this with the neck still  off the body to make for a cleaner finish job. 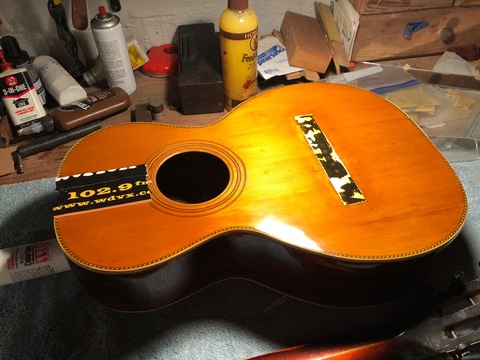 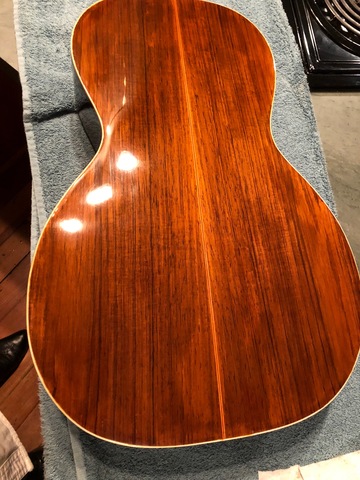 After the finish was completed and had a chance to harden, I re-attached the neck, and replaced the broken bridge with CAD  designed exact replacement in Ebony. 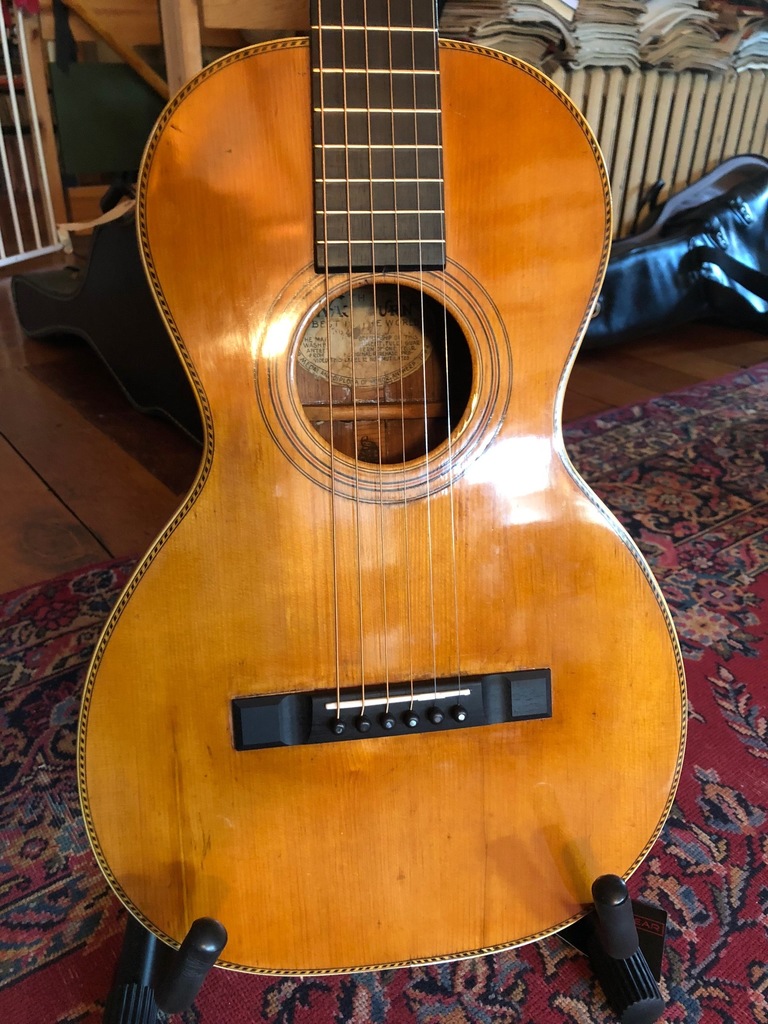 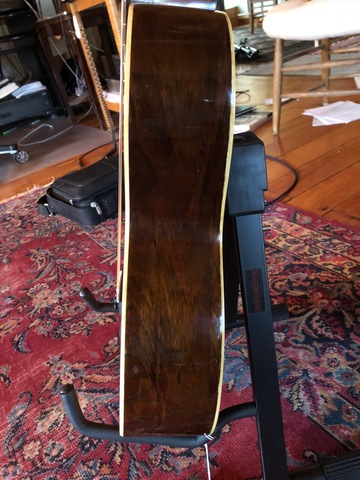 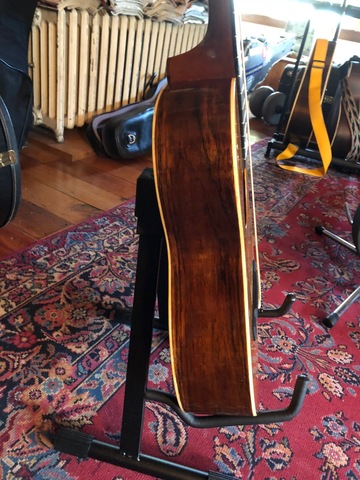 I’ve been playing it off and on over the past several weeks as I’ve tweaked the action and the tone has opened up a great deal.  Pam is as loud as a cannon with a brilliant high end and strong mids and lows, particularly for such a small bodied guitar.

That turned out nice! WDVX is an awesome radio/web station! Are you from East TN?

Thanks.  No, I'm from Illinois, but I got the bumper sticker when I played the Blue Plate Special there a couple years ago.  A very cool station indeed.