Permalink Reply by steve curtis on August 16, 2008 at 12:40am
Hi Magnus,
great photo's, looks like you have that technique down pat, I've never used a heat gun for that - I think the possibilities of damage scare me off, maybe I'll try it out on a scrap guitar though.
I guess its pretty quick? That appeals to me!

by the way, a steamer is pretty easy to rig up, I bought the cheapest expresso maker I could find, some hose and one of those little attachments for blowing up a football - works well although it can be messy. Maybe cost £20 all in.
Your method must be a lot cleaner - and not having all that water in the joint is pretty neat too.
Thanks for putting that up,
all the best,
steve

Permalink Reply by Magnus Hultin on August 16, 2008 at 1:58am
You are right on the spot ther Steve. Some of us have been messing with hot water and steam, and I think thats what made someone try this. It is a lot cleaner.

Sometime i also find that steam and water leaves to much traces in an old cracked up cellulosa laquered vintage surface, which can be difficult to get rid of.

But again, the instruments I have worked with have been in pretty bad shape, and they have been mostly my own. I would probably hesitate to use this technique one an expensive Martin, owned by anyone else. Perhaps after some more training.

The Goya on the pictures, in fact form 1962 or 63 (not 64 as stated before), is a Levin made "folk-guitar" developed partly on requirements from an american troubadour Oscar Brand, who was a Goya player in the 50:s and 60:s. It is flamed maple and as allways on Levins, alp spruce in the top. There are transparent topguards on both sides of the soundholes. I found it in a shop in the Chicago region (Internet buy), where it had been stuffed away awaiting repair approximately 25 years. I thought it deserved a better future. It had severe cracks (as seen on the pics) in the upper bout sides.

It will never be especially beatiful on a close distance, but it is now a nice sounding player, and as I said, very loud.

Permalink Reply by steve curtis on August 16, 2008 at 4:47am
after enough attempts on scrap I think I'd be happier trying this on a more expensive instrument in some ways - the water problem just never feels comfortable to me, but i guess it does get the heat directly inside the joint....maybe theres a compromise somewhere there...
I haven't come across a Goya before, but with the amount of great wood available in Sweden (pretty much at the top of my holiday list) I'll definately look out for one.

Its a good feeling bringing something back into the playing world - and a loud acoustic usually seems to equal good tone to me, and beauty is in the ear of the beholder I guess!

Great photos (I like pics! :0).....I was given a plywood topped guitar to practice on that had a neck/heel seperation..... 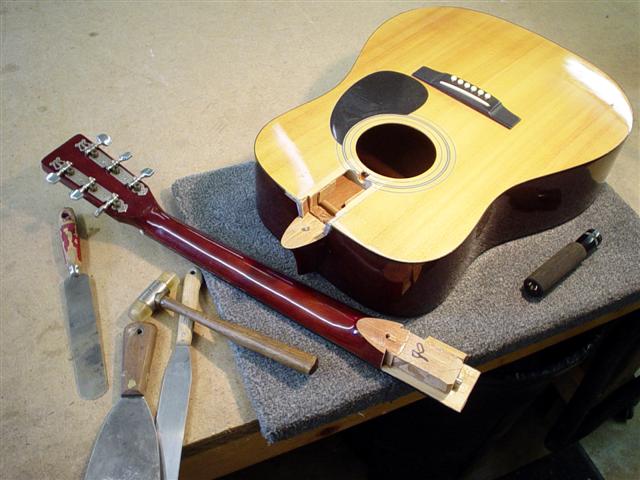 Like you, I also wondered if just direct heat/hot air would loosen the glue in a joint. I was a little nervous to try what Steve had done with the steam (I even bought a used expresso machine at a yard sale for a buck...but never took it any further...finally threw it away!) So I tried heating the area with a hair dryer (I've got a heat gun but thought it would be a bit much) and I started on Med. for about a minute...then kicked it to High for another minute or so...then with a few light taps with a plastic headed hammer...the heel came right off.... 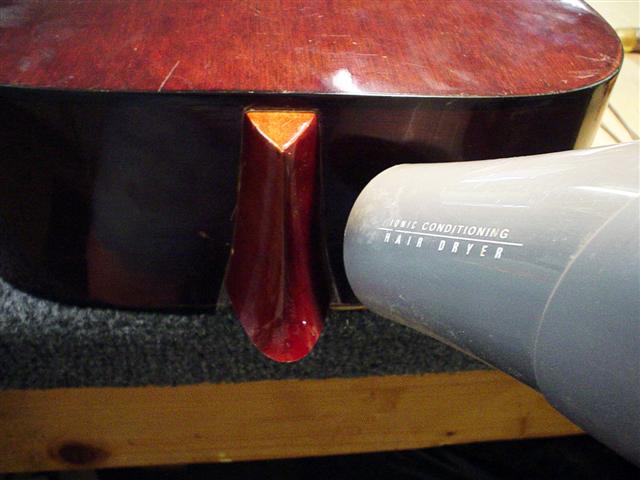 I thought "Wow! That was easy!"....So I tried it on the fretboard....working at the soundhole end I took my time and heated just a little of the fretboard at a time, working in a wedge as I made my way to the nut and......Presto! Now I know I'm making it sound super easy (maybe since the guitar probably didn't sell for a $100 new....very little glue was used!) but I think dry heat may be an alternative to steam!
...Some concerns might be to much heat melting plastic bindings or loosening frets?

Thanks for posting your method....

Permalink Reply by steve curtis on August 17, 2008 at 12:25am
hi Mike,
wow, I can't believe how easily that seemed to come out - thats excellent. Great pics too!
That's so much better than using steam, so quick and clean, perfect.

I have a feeling it might not always come away so easily, but its worth a try before firing up the steamer.

I think any minor problems with frets possibly coming loose would be easy enough to correct afterwards, and it would be a pleasure if all necks came away that easily! You could possibly try shielding binding from the heat with foil or 10mmx10mm angle section.

either way - thanks for showing me an easier way, I'll definatley be dusting off the hairdryer more often!
all the best,
steve

Permalink Reply by Magnus Hultin on August 17, 2008 at 1:30am
Thanks guys,
I am happy to see the interrest, and that someone else tries "the hairdryer method" with some success.

Nice pics Mike, I like to document what I do. With the cameras of today it´s so easy. With the pictures You can discuss the projects with others and sometimes get good advises. And You can also create nice project threads in forums.

Permalink Reply by Doug Collins on August 29, 2008 at 5:58pm
Wow, that was a great tip. I just used a hair drier to remove a bridge. It came off very easily with an old 1600 watt unit without any fear of heat damage to the soundboard or bridge. Mind you, this bridge was already half way lifted off (which was why it came to me), but what a great method to get the heat where it needed to be.

Permalink Reply by Doug Collins on September 3, 2008 at 6:47am
Just to follow up: I tried this same method to remove the neck on the same guitar. Again it worked well with the neck coming off easily. However, my lack of caution toward heat damage caught me this time and some discolourization to the body occurred near the neck joint. I know most of you experienced luthiers wouldn't have made this mistake, but I want to make sure I don't lead some other amateur astray with my above comments about no "fear of heat damage". Be afraid, or at least cautious and protect surrounding surfaces.

Permalink Reply by Brian Farrell on September 3, 2008 at 7:59am
Thanks Doug! I am going to try this for a neck joint soon. I will proceed cautiously. The bridge came off quite easily with the hairdryer method, and only minimal finish damage (again, rookie mistake).

Has anyone considered this?

I have on older mini travel iron I use. Perfect size for a bridge or fretboard tongue. I just took the kinda flimsy plastic handle off & screwed a piece of square aluminum on for the handle. This pic isnt mine, just a grab off the net. I think it was $2 at a second hand store. The pic title says 'sanyo portable travel iron' but I dont recall mine having a brand name anywhere. A cheap useful little iron. Ive even used it for a few side bending touch ups now & then.

Oh yes, I use a travel iron for heating when removing bridges and loosening fretboard ends. The travel iron is light weight, so I use a small bag of sand over it to keep it in place. And some cardboard to protect the guitar, just in case .