Because of a bridge lifting problem, I'm replaceing the bridge with a larger and lower one.  But now I'm left with this condition, a nice smooth perimeter surounding a very rough, slightly depressed area, not an ideal situation.  Any suggestions?  I plan on using Titebond because from what I read it's slightly more gap-filling than hide glue.  Also, I've never used hide glue before. 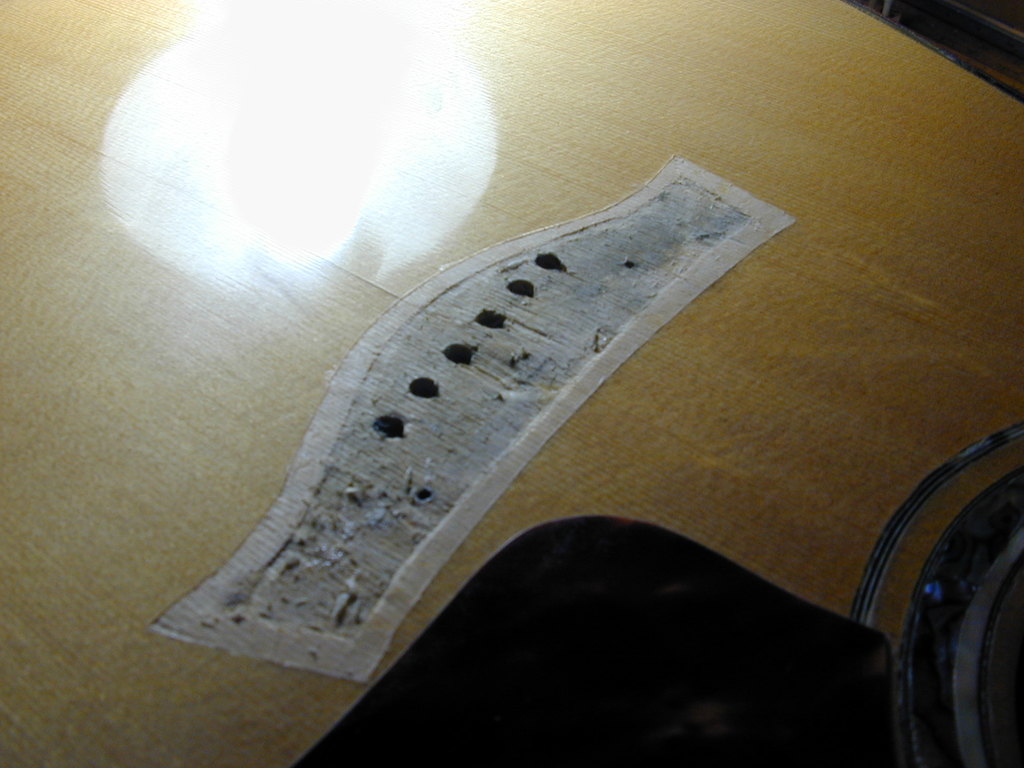 Permalink Reply by Mark Pollock on July 10, 2010 at 8:04am
Can't comment on the bridge, but I will say that there is next to nothing to fear with hide glue. I followed the directions here -

and made a very nice, cheap glue pot for my occasional repairs. It works well!

Permalink Reply by Ned Knepp on July 10, 2010 at 12:14pm
For myself, I don't think I would want to glue on a bridge with only the perimeter holding it AND I don't think I would want to depend on glue to fill that large a void. I would want as flat and wide and area as possible to attach the bridge. I would also use hot hide glue because it won't retain as much elasticity as Titebond but even if I used Titebond, I would not want that large a gap filled with glue.

Perhaps you can use a paper template to cut a patch. I know it will be extremely thin but you might cut if from thicker stock, attach it to the bottom of the bridge (in the correct location) and then thin it to fill the void using the bridge as a backer. Of course you may need to scrape the original area flat and fill any tear out first.

Permalink Reply by Jack Lord on July 10, 2010 at 12:25pm
Exactly my concern. I think the hardest part will be making the rough area smooth and flat. I wonder if I could do it with a hand-held trim router (scary).

Permalink Reply by Jack Lord on July 10, 2010 at 1:37pm
This is my latest thought. Using a set-up like this, route as big a rectangle as possible in the rough area about 1/32" deep, glue in a spruce patch and using the same set-up, route it to the height of the new bridge surface. 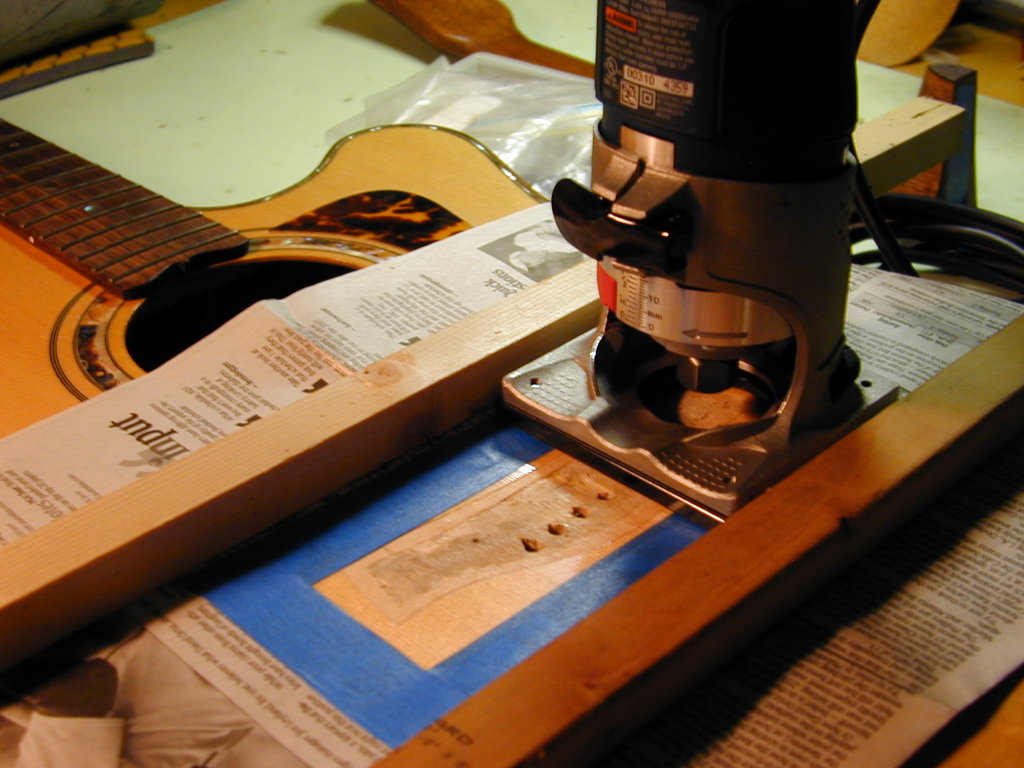 Permalink Reply by Ned Knepp on July 11, 2010 at 1:21am
Jack,
The router setup looks like it might work but that is all I can say. I have not tried this on a mounted top. In my experience, the tip of a router bit always leaves a little ridge wood at the edges of it's path which needs to be removed by sanding or scraping anyway. It could be that I was not using the correct bit. One thing I would be concerned about is belly/arch in the top. If you decide to try to route it out, make sure you can follow the top with out rocking. This was one of the reasons that I thought of using the bridge for a backer for the replacement material. Hopefully it will still be a close fit to any "not flat" aspects of the top.

Actually, the bridge area looks rough but a lot of it appears to be old glue. I really like using a scraper to clean up and smooth things like this. I feel like I have control that I'm not too sure I would have with a router. I keep a box of single edge straight razor blades to turn into scrapers. It's not too hard to roll a hooked edge on them and they are small enough to easily work in a limited area.

Permalink Reply by Jack Lord on July 11, 2010 at 6:15am
The top is very flat in this area. The bridge is flat and when clamped on, a piece of paper cannot be slipped under any of the edges. I may try scraping first though.

Permalink Reply by Jack Lord on July 11, 2010 at 7:34am
OK, I scraped and sanded and it is pretty smooth. This .012" veneer I had fills the gap just right. I think this will do it unless someone else has an opinion. Thanks for your help. It sure helps to talk something over with someone. Permalink Reply by Ned Knepp on July 11, 2010 at 1:43pm
What I see in the picture looks pretty good now, Jack. Which ever glue you use, it looks like it won't have a lot of gap to fill and the bridge will have a good flat surface to glue to.

How are you going to glue it up? I can't tell if the veneer is perfectly even with the surrounding spruce. It would take more time but you could glue down the veneer under a flat block then make a final scraping to insure the veneer was level with the spruce then glue on the bridge. Of course, you can also just glue it all up at once.

I understand about talking it over. In another life, I spent my days up to my eyeballs in computer problems. I learned that a good way to deal with "stumpers" is to talk it over with someone else. A surprising amount of the time, I saw the answer as I talked through the issue. If not, others usually saw things I missed. Sometimes you just have to talk through something to organize your thinking.

Permalink Reply by Eclipse Wizard on July 15, 2010 at 7:33am
Normally when I reglue bridges or do neck sets i use tightbond that I mix with spruce dust. Ill use 80 grit sandpaper and get a mix of about half dust half glue. This creates a a bond between the glue the dust and the surface area in question. It hasnt failed me yet.

Permalink Reply by nathan clark on July 15, 2010 at 7:39am
When I encounter something this bad:

I use the same species of wood for the patches as that of the top and maintain the same grain orientation and run-out as the top.

I try to keep the glue joints away from the perimeter of the bridge's foot-print so the bridge itself helps span the problem area.

I try to keep the cross grain joints running as close to the grain as possible as the cross-grain joints are the weakest part of this sort of repair.

I keep the glue joints away from the pin holes because that's the top's folding point.

I avoid running cross grain joints. I break them up if I can by putting them at different latitudes and different angles. I think of this like avoiding running joints in a dry stacked stone wall.

If it's possible, I taper the thickness of the patch and mortise with the grain so it's thickest in the center, then feathers out to nothing.

I treat the patches like inlays. I lay them out, cut them out, then cut the mortises in the top and I'll radius the bottom of the mortise if possible.

I glue the patches in with hide glue, then plane chisel and scrape them flush with the surrounding glue joint.

I'll upload a photo of a rather extreme example of how I patched some previous damage I encountered during a bridge re-reglue. 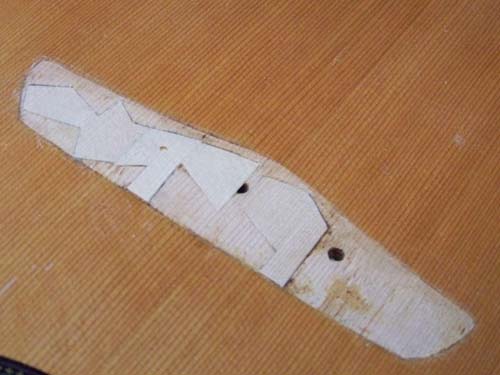 Permalink Reply by Jim Bancroft on July 19, 2010 at 9:49pm
Looks pretty simple to me, the area that the bridge is glued to must be perfectly flat, sand or scrape until it is flat.Clamp bridge and work a .004" feeler guage under if you can, once it's flat the feeler gauge will not work in, you can also add some water to raise the grain before sanding and scraping. Doesn't appear that there is enough of a drop off that a shim would be needed.
Next glue the bridge on with titebond or hot hide glue. I prefer hot hide glue but Titebond would be OK. Looks simple and straight forward from the picture.