So.. where's my math error?

I expect to catch heat for being a mathematical idiot, but here goes:

Refretted a customer's electric with s/s frets. Ordered the frets (4ft) and it all worked out fine. The end.

My thinking was: by adding the 2 lengths together and dividing by 2 I'd get the average fret length ... which I did and it was exactly 2-inches.

Then panic set-in. "If the average length is 2" and there's 24 frets, that's 48" and that's the length of the fretwire I ordered, with no room for error whatsoever".

As it turned-out, there was plenty of fretwire left-over... maybe 10" or so. The job's done, the customer's happy.... but where'd I go wrong here?  My better half thinks the supplier may have been generous, but I never measured the actual wire when it was received.

There's bound to be someone here who'll get a chuckle before setting me straight?

Your quiz has me wondering too.  Is it because they are not equal spaced through the length of the board so average may not apply? I'd imagine you did get some extra also, no matter what the math shows.  Shouldn't be 10" off, I don't think.

I have a feeling you know the answer before asking!  Come on now!

No, Glen.... honest, I still don't have a clue!  In fact, this happened last week and I was hesitant to even ask the question, thinking (a). better to be thought the fool than to prove it, and (b). there would be an 'ah-ha' moment.

But that hasn't occurred, so I'm throwing myself at the mercy of the better-educated:)

I've made that same calculation ((F1+F2)/2)xN, but Glen is right about the spacing. Why not just get a caliper and measure all 24 frets and add to find the total length? You'd be under the amt received since you clip frets ends. You could also take the average and see how it compares to the simpler method. I'll take 15-20 minutes to do but, to my thinking, that kind of study adds up over the years.

What... and spoil my fun?!  The missus said the same thing.... measure them all and add... which I eventually did and it came out to just about what was used (more or less, accounting for trimming).

But the "stump factor" of exactly why the (F1+F2)(2)xN didn't work is still cloudy to this old brain :)  Anyway, thanks for the thoughts!

OK, if you want fun then how about 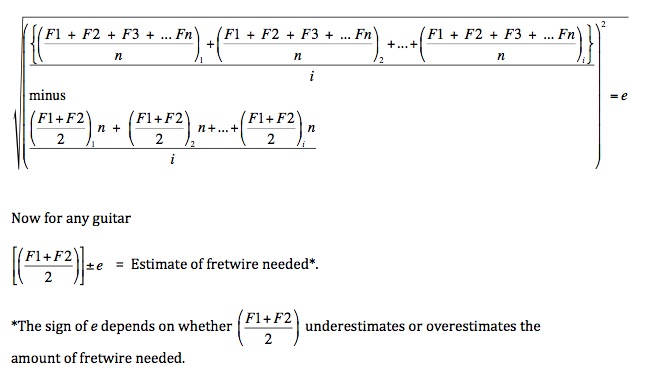 This creates an error term e that when added to ((F1+F2)/2)xN gives a closer estimate by measuring multiple guitars for average fret length in two ways, the easy way and the hard way. The variable i represents the number of guitars measured and when the sum of the averages is divided by i creates an average of the averages.

Correction: The second set of nested equations doesn't need to be multiplied by n, i.e.,

My guess would be the "average" as you figured it is skewed by the fact there are more longer frets above the mid-point of the fretboard (around the 7th or 8th fret) than there are shorter frets in the lower half. In this case the 12th fret is not the middle of the fretboard. I think your formula would only work if the frets were spaced evenly.

Yes, food for thought there.  But in thinking about about it:  if there's more longer frets than shorter frets, then wouldn't the apparent "shortage" of material be even worse?

Again... this is all an exercise in theory, since 4ft of fretwire was more than sufficient for the job... which is why, no doubt, it's the standard length sold for the standard fret job.

Something tells me I'm better-off taking their word for it and not try to worry about the "why" :)

Hey, Mike, which fret is closest to 2 inches?  You didn't say how long the scale length is so I can't lay it out to get an estimate on the "average" fret's location but finding that point should give you some idea of how many short frets are in the mix.

Robbie... your equations are why I wish I'd been paying attention in math class instead of doodling dragsters on my PeeChee or marveling at how quickly lil' Susie was growing-up :)

LOL. I was doodling guitars, surfboards and Alfred E. Neuman myself beginning in the 7th grade.

Imagine that every time a guitar comes into the shop that you compute both averages and put the results into a spreadsheet. Each row contains an individual guitar's data while columns 1-3 are guitar number, avg1 and avg2.

After you have measured a large enough sample of guitars (probably 30) then sum the 2nd and 3rd columns individually then divide each by the number of guitars measured. This gives you the averages across all guitars, eg, AVG2 and AVG2.

Now, subtract AVG1 from AVG2 because AVG2 is the real average and AVG1 is an estimate. This tells us how much, on average, avg1 is biased (I'm thinking avg1 underestimates avg2).

AVG2 - AVG1 = e, the amount of bias. So, when you take in a guitar for a fret job, just compute avg1 and add e. Multiply by the total number of frets and you should have a reliable estimate of fretwire needed.

I'm guessing that bass guitars would bias the error term. It might also be sensitive to different fret scales and the number of frets (in which case it might not be useful), but my intuition tells me their influence of would be small.

This is a lot of work for one person, but if we could get 10-15 people to calculate avg1 and avg2 for 2-3 random guitars, we could create this estimator quickly.