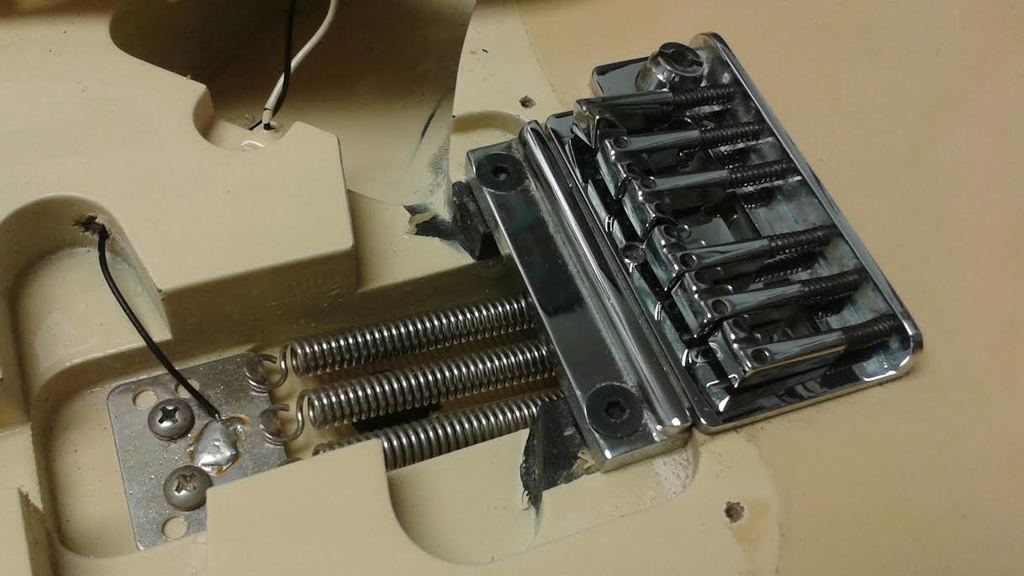 A dozen or so years being in and out of Strats and I've never ran into this one before.  Just thought i'd share for fun.  I remember a brief period where Floyd Rose produced a bridge the appeared "strat like" but you had to to all of  the intonation by releasing a screw underneath the bridge.  I was just curious as to where and why this bridge fit into their lineage.

That's a factory installed (Schaller?) "Freeflyte" tremolo, circa 1983/4. If you google it there's a lot of info to be had, including at least one company that's selling replacement parts.

This was interesting to me as I have a 1983 made in Japan Stratocaster.  The cutaway for the springs in mine is in the back of the body & tremolo is similar - but obviously cheaper version. When budget versions of popular brands were first made in Japan I believe they were quite close to the "real" thing. My Strat weighs a "ton" & has great sound although at least 2 of the pikups have been changed - neck & mid p.u.s are Lace Sensor. No brand on neck p.u. which is much more powerfull than other 2. How old is your guitar - looks like near new. Only 2 mounting screws - my old one has 6.

I paid $200Aus 10 yrs ago. The bloke in the pawn shop was somewhat beligerent so I asked for a try out - suspecting he may not have a good lead. Sure enough the lead cut out every time I touched it - gaining me a good discount as I blamed  the instrument for faults.

I believe this year of Jap Strat is now the most sought after non American model. I have certainly been well satisfied with mine. I think these were made a little "cheaper" in subsequent years & became the Squier series. I bought an early one of these new & it too gave a good sound.

I find the history/variations in guitars quite interesting.

Must be a jap version of the Elite strat , there is normally an allen key adjustment for tension , in middle of bridge .

This was a customer's guitar and I believe he was the original owner, and it was US made although it may have been produced with the intent of being an export model.  I've got a soft spot for pawn shops.  I worked for a pawn shop briefly while in between jobs because he caught on to me buying so many guitars from him.  He said "either you've got a collecting problem or you know more than I do and are selling them and I don't like that!"  So I spent a while getting all of his stock touched up and more sellable for a while.