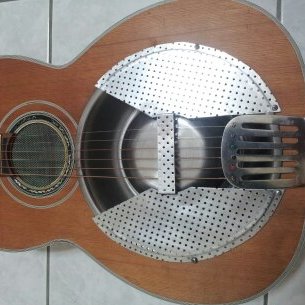 Hi,      I recently used an automotive acrylic clear over a bare timber acoustic neck. I sprayed the neck about 2 weeks ago and it is still a little tacky. I'm an impatient sort of person so this is…Continue

Should I attempt to straighten a slightly bowed fretboard (new fretboard) prior to gluing. The convex side will be glued to the neck. I've read that installing the frets can relieve the bow somewhat.…Continue

Hi all, I recently completed my first neck reset thanks to some help by individual on this forum. I have just strung up the guitar with a old set of light gauge strings and have discovered that the…Continue

Hi, I will be re fretting one of my guitars shortly but also wish to remove the varnish that is covering the fretboard. I plan on oiling the rosewood and prefer the feel of timber under my fingers.I…Continue

charley erck said…
Paul, glad you had good luck on your archtop neck reset.
I just wanted to ask you about the resonator in your photo.
I play resontor guitar and hve fooled around with them a little.
I worked on a friend's , and set it up for him. He had installed a
spider cone in a flat top and used various hardware including an
egg poacher frame for a coverplate! It plays nice in lap steel config.
I see you have used a burger flipper for a tail piece? Wondering what
the resonator consists of?
Hope I'm not bothering you, but the guitar is quite nice looking,
and I wondere about it.
Charley

The Resonator I built was originally a vintage Suzuki No 6 guitar. I ended up with a dog bowl for a resonator cone some stainless steel perforated sheet for a cover plate and as you mentioned an egg flip for a tailpiece. I trialled 2 different dog bowls. The first was a standard bowl shape and the second (which I opted for) was an upside down dog bowl. The later, being a "W" shape enclosed the soundhole and produced more base compared to the standard "U" shape bowl. The bowl however did not produce the sound I was after. It you play 1920 style Delta Blues you probably would be happy with the sound but I found it just a little to tinny.

Im actually thinking of building another but may this time purchase a cone.

charley erck said…
Thanks for that, yes a bought resonator cone would be good.
the using of impovised parts for the rest is fun and its all good.
I see just what you mean about the w shaped bowl, and how it would
Resonate bass a little more. I'm all for the standard spider cone, and go from
there with the conversion creation.
I love archtops too C