With a wide chisel and a spokeshave roughly shape the body: 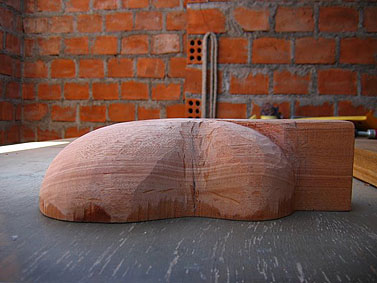 While hollowing the charango body in the following steps, tiny cracks may begin to appear and open more and more at the end grain (near the neck and at the end). To avoid this, moisture the wood in the critical areas regularly with a wet rag (especially when you note opening cracks - they will close again completely later on, so don't worry too much about this). Keep the working piece in a plastic bag when not working on it. When the bowl gets thinner than 10 mm, no cracks will appear again
No picture of this, use your imagination ;-)

Then, with a drill press and a gouge, roughly hollow the body an leave the walls at a thickness of approximately 1 inch or a little bit less (20mm is also ok): 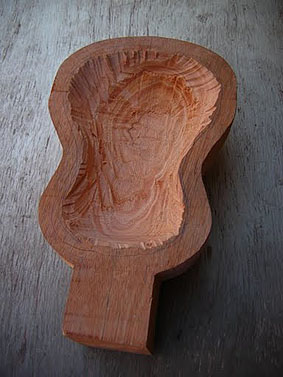 At the center of the drill press table, mount a pin: 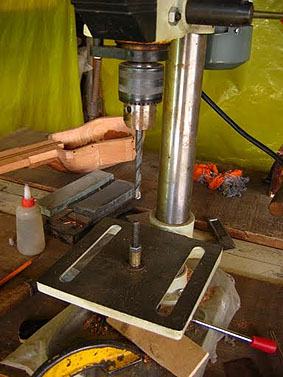 ...and adjust the depth stop so that there will be 10mm left between the tip of the pin and the tip of the drill (less than shown in the picture above). 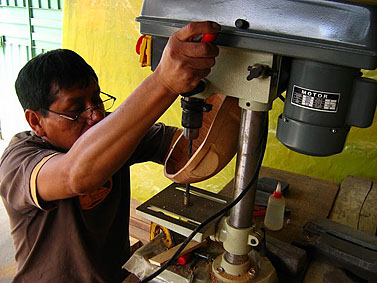 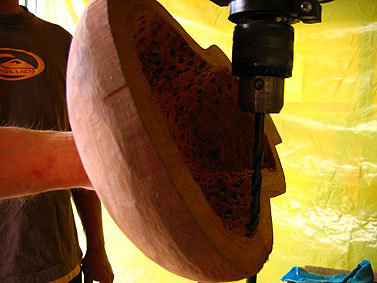 The more holes you drill, the less work will be left to do with the gouge. But don't overdo (like I did in the last picture above), the gouge is pretty fast, and the drilling is quite a bit tricky. You wouldn't save time drilling too many holes.
Be careful to keep the workpiece perpendicularly to the drill. This is extremely important near the border (where will be the top), because any other angle, in this place will cause a thinner body bowl thickness! (Again, the picture above is a less than ideal example... sorry, I have no better picture handy). Of course, very close to the border, the angle will be something else then 90°, so adjust the depth stop to something more than 10mm.

Remove wood until the drill marks disappear (or nearly disappear): 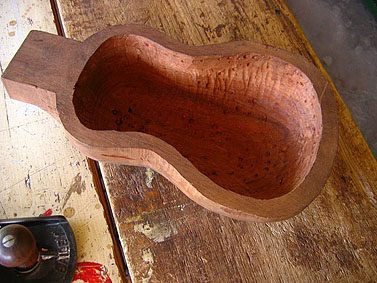 Huh... I was quite a bit careful, I left way more than 10mm! This was because it was the very first charango made with the drill press calibration method (got the idea from a GAL-article about archtop guitar building - somewhere in the Big Red Book of American Lutherie).

Now, put the body in an oven (yes!) to dry it completely. I don't know with which wood species you could not do it, but it works very fine with mahogany. Set the (electric) oven to it's minimum of about 80°C (= ca. 170°F) and keep it there for one or two hours. Let it cool down and repeat the procedure once or twice again. During heating up the working piece, some cracks at the end grain zones may open, but they will close again as the piece cools down. The working piece will leave the oven more or less warped. This warping also would have happened without putting the bowl in the oven, but some years later... 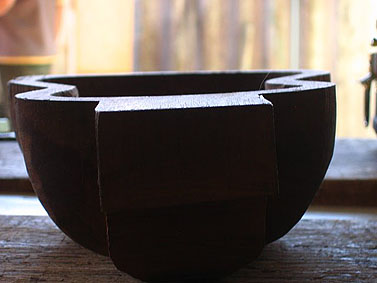 Most Bolivian charango makers just let the wood dry for years. Many of them buy the wood roughly pre-shaped and pre-hollowed to a thickness of about 20 mm and let it piled up till they use it.

Now it's time to rectify the warping. Use a really flat piece of wood to check your progress in flattening the border. 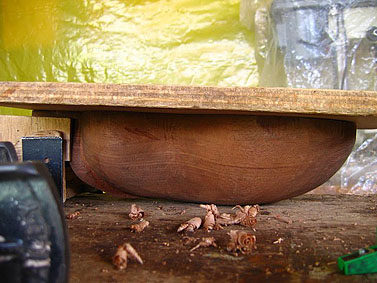 
With a Robo Sander or a similar device sand the edges down to the definitive outline of the charango top (sorry, no picture).

Then, with a spokeshave give the body it's definitive shape: 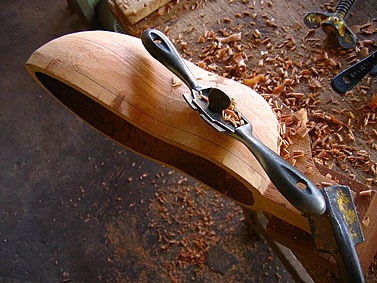 For the waist you might want to use a rounded spokeshave: Comment by Steve on August 27, 2017 at 10:39pm
This looks great, i have been trying to research any info i can to make this type of instrument. Thanks for pic, and notes.

Comment by Steve on August 27, 2017 at 10:45pm
I see im a few years late. By any chance do you have any pointers ? I would really like to give this a shot, any issues with certain tensions on body, or increments, sizes, any recommendations ? I'd appriciate it, thank you for what info you did put out here, your post has gave me the most info i have seen so far.