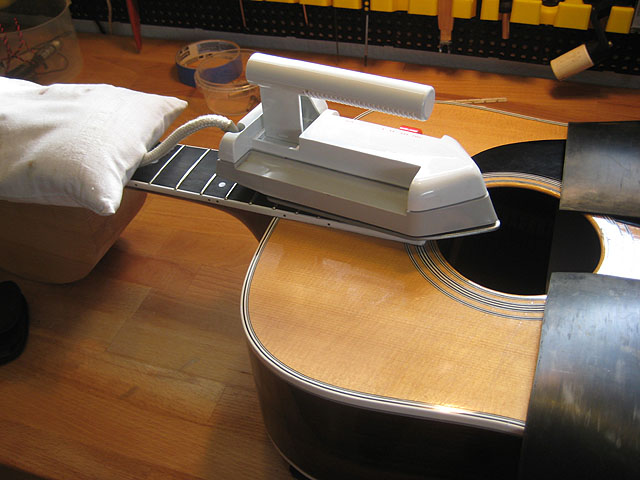 I'm keen to try this method for removing the tenon-jointed neck of my Epiphone 147.  My worry is 'how hot is too hot'?  (I've already toasted the fake-MOP dot markers getting the FBE loose).

The finish is polyurethane.I have an infra-red thermometer to measure surface temperature, but does anyone know what temperature PU can withstand?

For bridges and fretboards removal I use an infrared bulb like this one:

Eugen, can you tell a little more about this approach?  ..thanks, Tom

Just protect the top with thick paper and aluminium foil

So infrared will blister finish?  tw

HEAT will blister finishes. Infrared bulbs are made specifically to produce heat. A lot of heat.

I'm not that familiar..what are some advantages/differences to a luthier between using the typical 'heat lamp' and an infrared lamp (practical applications, besides where they fall on the spectrum etc)  ..thanks, Tom

I guess I don't understand your question, Tom.

Infrared lamps are heat lamps. I know of other lamps that produce heat, such as halogens but heat production is not the purpose of those lamps.  I understand that infrared lamps come in different wavelengths and configurations but I haven't investigated beyond that. I suppose it should be possible to research them easy enough on the Internet if you want to know.

Original post: "I guess the idea came up partly due to lack of more fancy equipment, like steamers."

I would consider a recalculate on this method for some of the work posted. Steamers are almost mid-evil in concept, cost, and operation. The glue needs heat more than the wood.