What would you do with this messed up fretboard ? I think I will have to re-bind it and overhang the frets , then possibly refill with epoxy ? I cant take much off the board because it has parallelogram inlays .

Could you use a taller fret wire, offset the ends like it is already?  Seems a close call.

As unusual as it is for me to defend Gibson, that's not the binding in its original state. Gibson binding always has the dreaded 'nibs'.

The instrument obviously has had a refret and my best guess would be that the owner, at that time, asked the tech to round over the edges of the FB, or the tech just did a lousy job.

I can't see where the FB itself has been mauled. The 'overzealous' rounding appears confined to the binding.

There are several different ways to approach this. Most involve labor intensive reconstruction techniques

The most effective and efficient way to restore the level of binding would be to rebind it. I wouldn't worry about rebinding with nibs as this is a design flaw that Gibson refuses to back away from. Unless your customer is specific in the request for nibs (and I can think of several reasons "why" they aren't a good idea), proceed with a standard re-binding & re-fret job.

As part of the re-fret, you'll prep the FB by restoring the proper 12" radius to the FB.  It's NOT an option in this case, again, based upon the pics.  When you do that (after installing the new binding) everything should line up perfectly.

All of that is 'just my take'. Good luck with this and we'd love to see you "after" pic's.

As Paul says, the instrument has had a lot of work done on it over the years.  There is every chance that it has not been refretted and there is every chance you may have some depth left in the inlays.  This last issue is important because the FB is a bit of a rocky road by the look and a re-radiusing would be most beneficial to start getting this one back on it's feet.  Have a close look at the inlays to ascertain their depth and what they are made out of and see it you can gently lift one to check the depth.  Clean up the radius if you can, watching out for how close the side dots are to the face of the FB.

Other wize, what Paul said:  if you can talk the owner into not having nibs you get an extra 10% fret width after a rebind and also get rid of the problem of having skinny strings hang up in the juncture between fret and nib.   But, you need a rebind regardless.

Thanks guys , the owner doesn't want nibs but after re-binding I think there will be a slight gutter inside the binding , where the wood was rounded over , guess I'll just fill that after fretting over binding .

Permalink Reply by Mark Pollock on July 28, 2014 at 9:51pm
I think I see what you are talking about, the sides of the fretboard kind of slope down?

The right thing is probably to replace the fretboard or sand it to the correct radius, but I get that you might have to take a lot of material off.

For the sake of discussion, and in hopes of inspiring a better idea, how about getting that fretboard a bit level, leaving that falloff on the sides, then using a rather tall fretwork, carefully bent to match the board. Level the snot out of those fret, which will look tall on the sides, but would then have the correct 12" radius?

Yes I think it may end up needing a bit of everything , including binding .

My thoughts exactly on it.  If you split the difference between slightly higher fretwire and some sanding back to the radius, it looks to me to be close.

Is the owner complaining of the radius or just wanting a fret job. It obviously needs a fret job.

If the customer was indifferent, I would probably leave the binding and fretboard alone and just spend more time prepping the fretwire than usual.

The radius seems relatively even at the fret seat in the photos you uploaded so it might not be so bad.

When prepping the new frets you can pre-grind the fret ends to your desired bevel in a similar fashion as you might were you refretting inside original nibs.  In this way you can have the fret come out to the edge of the fretboard at a nice 30 degree or so angle without having to file the binding itself.

Pre bend each fret to match the radius of the fretboard at each fret as closely as possible.

When you install the frets, use a drill press and the stew mac caul with the "universal clamping caul" that Walter Wright has been advocating over on the gear page.

Lastly, lightly sand a secondary bevel into the top of the fret ends to give a more uniform appearance.

Check out my routine photos 8-15 here:

I'm with  you, Nathan.  Good photos there, and some good advice, I think.   Unless cost is REALLY no object, that's pretty much the way I'd go, although I would do a bit of sanding on the board to straighten it and flatten that roll-off at the edge (if possible).                   I wouldn't be using the fret press - never got the hang of that tool - I'm still tippy- tapping away. . .

I add this only as an additional option, not a suggestion:

If rebinding is undertaken: widen the binding channels equally on both edges of the FB to eliminate any remaining FB 'falloff'.

Whatever option/choice you make, I'm sure it will come out brilliant :)

Thank you all so much , I am not sure I can wrap the frets into that end curve , but its sure worth a try .

Paul I dont think I am able to widen the binding channels , I would need some fancy router attachment as the neck is still on the guitar , could you offer any details ?

I hope the attached drawing helps to explain my thought. 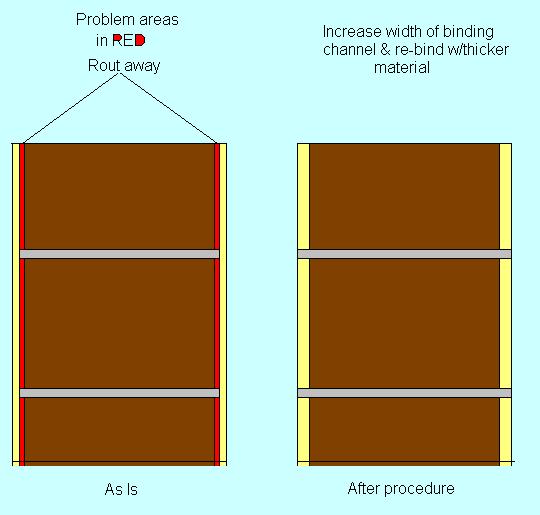