Les Paul Deluxe - Anyone Seen This Before? 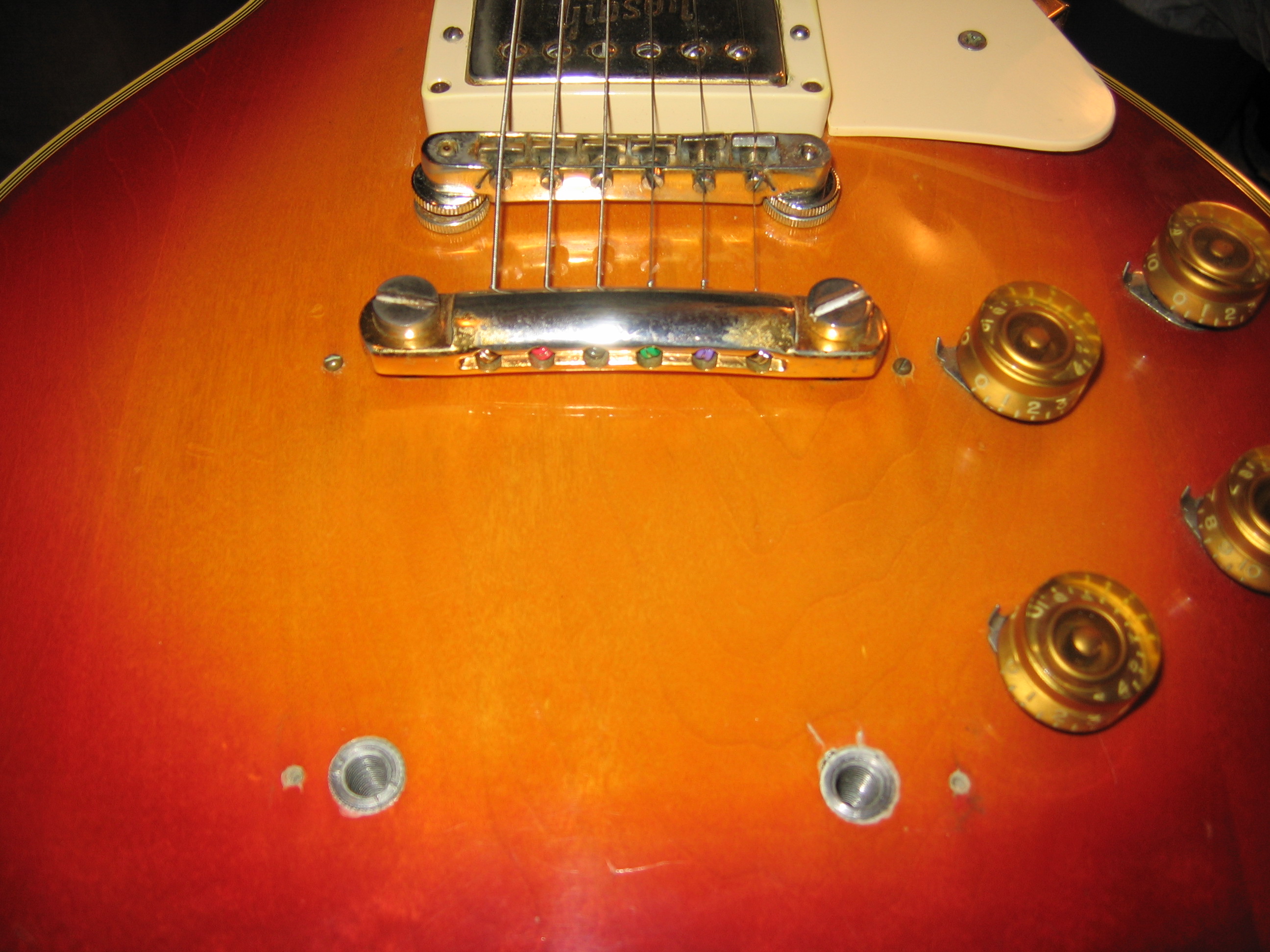 A customer sent us this photo of an early 70's LP Deluxe. He wants to know what kind of vibrato/ tailpiece might have been on the back studs. I have never seen a second set of stop tailpiece studs on an LP and can't recall a vibrato that would have mounted in those holes. I know there's an aftermarket piece that mounts on stop tailpiece studs, but why would they be back so far? Was it added later (as I suspect?)
Anyone seen something like that before?

Permalink Reply by Tommy Kay on April 16, 2009 at 1:13pm
My guess is possibly some type of b-bender unit? Those small side screws are puzzling?

Permalink Reply by Frank Ford on April 16, 2009 at 7:09pm
Gotta say I know dang little about electric guitars but my first thought was "Bixby."

Permalink Reply by Christian Johnson on April 17, 2009 at 1:06pm
I can't think of any tremelo that uses a setup like this (bigsby, gibson sideways, etc). So, call me crazy, but here goes. Let's say a guy wanted to reduce string tension for whatever reason. These holes appear to be the spread for a stop tailpiece. He mounts the tailpiece way back behind the tune o matic, thus reducing break angle and tension? Possible to use very heavy strings? The small screw holes off to the side are a toal mystery. I know it seems nuts, but what else? However, this could produce some nasty sympathetic frequencies behind the bridge.

Permalink Reply by Joshua Levin-Epstein on April 21, 2009 at 8:28am
It's hard to tell from the picture but I would guess that it was a Bigsby B5 or something similar, installed badly. I infer the installer wanted to have the option of removing the Bigsby so rather than mounting wood screws, the installer used the stop tailpiece bushings for attaching and did not use the screws that are off the spring cup and opposite the bar. The little screw holes are for a plate to cover either set of bushings, like Gibson did on the early 335 types ("Custom Made") when they installed Bigsbys at the factory. How unusual for Gibson to have such a lapse in taste and judgement. But they did provide an example for whoever did this. If I were without sin I'd be looking for some stones.

The Vibramate adapter (and its Bigsby) would install on this and cover the second set of bushings, but that's a lot to pay to guarantee tuning problems. But not as much as pulling the bushings, filling the holes and touching up the finish.

I owned an all gold 52 or 53 LP that had a bigsby on it that was removed before I purchased it. It then had an archtop bridge (aluminum bigsby saddle and wooden bridge combination) and Kluson trapeze tailpiece. Needless to say, tuning was an issue. Eventually a Schaller bridge and stop tailpiece were installed. It still had tuning problems, just like a Les Paul should.

Permalink Reply by Eron Harding on April 21, 2009 at 9:35am
I have seen the 2 little screws beside the posts before. Check out this pict i attached. This is a '64 335 that a friend of mine inherited from his grandpa who was the original owner. It's got a little... we called it a badge... that goes around the studs. It's just a little 2 or 3 ply pickguard that's been cut and it attaches to the body with the 2 little slot head screws like yours has. It's not something that somebody just added, it's done very pro and matches everything perfect. We've never seen another one like it.... til yours. Which helps us to think that it's something that they added from the factory...maybe by request....
Attachments:

Permalink Reply by Russell Vance on April 21, 2009 at 9:35pm
That looks like a 'goof hider' to me - check underneath it for tear-out or damage. Seeing as the stop tail is new looking I'll bet a buck that the stud ferrules didn't match the screw threads (U.S. threads v metric replacement like Gotoh) and in the process of removing the originals they ripped up the surrounding finish/wood.......screws are in a different place to the ones in question anyway. Rusty.

Permalink Reply by Eron Harding on April 22, 2009 at 7:25am
We did take it off and everything was in perfect condition. No tear out, no paint chips scratches, etc. Original studs and all. We even had one of the biggest vintage guys in the business look at it for an appraisal and he said it all looked original aside from the tailpiece like you said.

Permalink Reply by Nick Anthony on April 21, 2009 at 5:35pm
i like the b bender theory the best so far but i dont know of one that mounts like that def not the hipshot or parsons white