At age 78 I don't have the stamina that I had as younger man. I've been thinking that I ought to get a sanding machine of some sort to conserve my energy, and of course a drum sander is a more economical choice than the holy grail, a wide belt sander.

My experience with drum sanders has not been a happy one. Sides can be fed in at an angle, but backs need to go straight through, for a couple of reasons. A particularly resinous back will gum up a drum in one pass. And, that back usually happens to be one of my best.

I've been contemplating making a drum sander with a drum large enough, and slow turning enough, to avoid the heat build up that melts the rosewood resin. A big project!

Anyone got any work-arounds? I have heard of spraying the drum with Pam from the grocery store, and I have thought of spraying with "GlideCote" teflon spray, but haven't tried it yet.

I have a drum sander and I use 80 or 120 grit Mirka Abranet as a "sanding paper". This is a special "paper" made of a mesh leaving lot of space for the sanding dust. It is not a perfect gum up free solution, but it works much better than standard sanding paper. 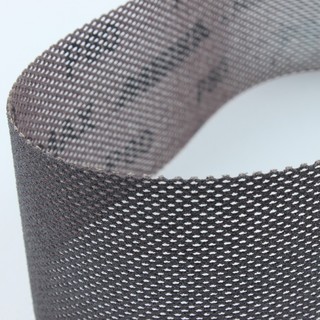 Some words from the maker: "A unique multifunctional aluminium oxide net sanding material, the open mesh backing results in a longer lifespan when compared with traditional solid backed abrasives - which tend to clog far more easily. Abranet is designed for dry sanding by hand, or by machine. When combined with dust extraction equipment, it's open mesh backing allows the efficient removal of dust, producing a cleaner work environment, as well as a better surface finish."

Thanks for the tip! That looks like really interesting stuff (:->)...

What drum sander are you using it on? 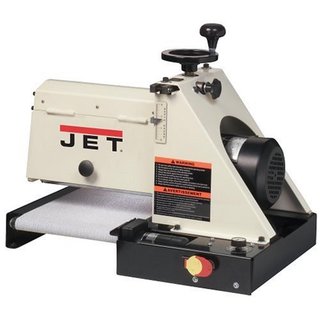 Brian, I have a home-made drum sander with a 5 inch drum.  I use 80 grit Klingspoor red paper on it.  I use a LOT of Cocobolo.  When my paper gets gummed up, which is after a few passes, I take my air compressor spray nozzle and hold it right up against and aimed slightly upward on the gummed spots and blow them off with air.  It knocks off 70% of the crud.

I've read on forums where people soak paper in oven cleaner and spray coatings on them and just all kinds of solutions, but I just don't get the fuss.  I just blow it off!  I don't know if it is my source of paper or just good luck, but it's just not a problem for me.  I'm not implying that my paper lasts forever on oily wood, but I can blow off the gunk pretty easily.

How about having someone else do the sanding?   That way you save on capital expense and consumables, in addition to chiropractic services.

LMI offers back/side sanding at reasonable prices - your wood or theirs. . .

I don't sand to a thickness, I sand to a resonance on my "initial voicing fixture". I have a video on my new website that shows that process:

Scroll down past the wood testing videos. I'm just today finishing up a simpler-to-build fixture for doing "initial voicing". I sand off a few thou, and run a resonance test, so I need to do it in my shop.

Frank might remember when Loy Martin and I were using Loy's Kuster drum sander to sand furniture parts in Gryphon---in the early 1990's. When we got a resin build up on the drum it would leave a mark requiring a lot of hand work to remove.

Loy then bought a Kuster wide belt sander that didn't have the resin build up problem. It had so many other problems that I think it bankrupted the company. The chair maker Dan Staltzer remarked that the machine was "Kuster's last sand".

I'm currently using a John Gilbert 5 inch surfacing disc on a drill press. It is equipped with a velcro pad that allows quick changing of discs---details on request. It's quite accurate, if a bit slow, but inevitably a few circular sanding marks escape my notice, and show up when the finish goes on. It would be nice to be able to sand to a finished surface with sanding scratches all parallel with the grain, hence my interest in a drum sander.

Brian, looked at your "my process" page and I like the way you don't keep things secret. Very interesting!

What goes around comes around. Here is one of the best examples I know of---long but worth it:

His name was Fleming, and he was a poor Scottish farmer. One day, while trying to make a living for his family, he heard a cry for help coming from a nearby bog. He dropped his tools and ran to the bog.

There, mired to his waist in black muck, was a terrified boy, screaming and struggling to free himself. Farmer Fleming saved the lad from what could have been a slow and terrifying death.

The next day, a fancy carriage pulled up to the Scotsman's sparse surroundings. An elegantly dressed nobleman stepped out and introduced himself as the father of the boy Farmer Fleming had saved.

“I want to repay you” said the nobleman. “You saved my son's life.”

“No, I can't accept payment for what I did,” the Scottish farmer replied waving off the offer. At that moment, the farmer's own son came to the door of the family hovel.

“Is that your son?” the nobleman asked.

“ Let me provide him with the level of education my own son will enjoy. If the lad is anything like his father, he'll no doubt grow to be a man we both will be proud of.” And that he did.

Farmer Fleming's son attended the very best schools and in time, graduated from St. Mary's Hospital Medical School in London, and went on to become known throughout the world as the noted Sir Alexander Fleming, the discoverer of Penicillin.

Years afterward, the same nobleman's son who was saved from the bog was stricken with pneumonia. What saved his life this time? Penicillin.

The name of the nobleman? Lord Randolph Churchill ... His son's name?

Brian,  you just made my day!  I had to stop Antiques Roadshow to read that to my wife!  Thanks for taking the time to type it up.

There are a number of videos and instructions for this, but what about converting a small lathe to do drum sanding, without the major investment? You could make the drum as large as you think would be adequate to eliminate the potential for gumming up the sanding surface. The only concern I could see would be the ability to take a few thousands off. Using a 32 tpi screw for the adjustment ramp would let you go a quarter turn at a time for an .008" increment. And of course you would have a nice small lathe in addition. Just a thought.

A big project, with it's share of unexpected problems I'm sure. I love making machinery, and jigs and fixtures, as it only endangers plywood (;->)...

In 2006 I drove ten hours from LA to Fort Bragg CA to meet Brian Burns. He introduced me to his double bevel sharpening system among a myriad of other invaluable lessons. It was worth every penny and mile. My chisels and plane irons are always sharp. I am repaid daily. Thanks Brian.