Firstly thank you so much for having me on your site - I will try & behave myself!

A good friend - Bobby Blue Shankaran - owns this very rare Aria. I would like to share his knowledge of it & hear from anyone who can add to it.

The instr. was purchased new in mid 1970's. Evidently only 3 were ever made - as demonstration models to travel around music retailers. Bobby thinks 1 went to Herb Ellis & the other to Eric Gale. They have both sadly passed on. But what of their instruments? The neck pikup was replaced when purchased by what was then just called the Jazz pikup - designed to help reduce feedback in hollow bodies. The tone is quite incredible for a Japanese version of a Gibson. Sadly a recent fall is why it is currently in my workshop/lounge! The top has partially separated from the side.

I have 30 yrs as a cabmkr with experience on every thing from superyachts to antique restoration but am only now turning my skills to instrument repair & hopefully soon to construction.

Novices/ newbies take note - Since I began my career I have been spending a few dollars whenever I can on the rarest & finest wood available - alas I wish I had bought more black ebony. I do have Brazilian rosewood & mahog., Honduras walnut, Cuban mahog., & the only 2 cub mtrs in existance of old growth Tasmanian celery top pine - 120 growth rings across a 105mm board! & 4 lge slabs of Tas. Myrtle.  I knew very early on that when I got old & had fine skills there would be no fine wood avail. to work with.

I would be glad to share the skills I have & will be seeking knowledge on guitar repair & construction.

To hear this beauty search Bobby's name on myspace. The tune "Mood Swings" is one of my favourites. He is actually making this up while recording it! The producer had a backing track & wanted guitar on it.

Question to moderators - am I allowed to post link to my youtube site? this would allow members to see my skills & ask relevant questions (inlay, finishing etc.)

Eureka! Well...a little eureka. First, it's probably important to note that the Aria brand changed its name to Aria Pro II in late 1975.

The following link shows the only example I can find to match the instrument you are working on. This website is devoted to Matsumoku made instruments and is one of the best resources for these instruments on the web. I don't know how I missed it yesterday while perusing the site: Matsumoku website. You will find at the top of the page, the guitar which shares all similarities to the one in your shop, save for the H.E. inlay into the pickguard and the tailpiece . They refer to it as PE-175 (Pre-Herb Ellis). I have searched and searched and I can only find photographs of Herb playing a PE-175 with the "Aria Pro II" straight across the headstock such as I gave examples in my last post. The earliest photos I can find are from 1978 where he plays this instrument. Later dated photos of him can be found where he plays the model with the Heritage like headstock. Earlier, such as on the "Great Guitars" LP cover (1975), he plays his Gibson. The 1978 LP cover of "Soft and Mellow" he is playing the Aria with the "Aria Pro II" straight across the headstock.

The following link shows the Aria Pro II catalogs from early 1976 (believed to be the first "Aria Pro II Catalog) onwards: Aria Pro II Catalogs. It is not until 1977, something similar pops up; the EA-650SB. However, this instrument has the "Aria Pro II" straight across the headstock, a different tailpiece, pickguard and a florentine cutaway. Finally, in the Late 1978 catalog, the first PE-175 Herb Ellis guitar appears. It has the same tailpiece and pickguard as yours but the Heritage like headstock. The instrument then seems to disappear from the catalog and shown example of the price list, until 1980 where it is again depicted with a Heritage like headstock.

The following is a link to the Aria Howard Roberts as I know as the PE-185: Guitar Blog. And in the following link, although I cannot be certain, I believe this is the instrument I worked on some years back. I only say this because it is in British Columbia, where I was living at the time I worked on such an instriment: Howard Roberts Aria.

So this really doesn't verify anything...maybe muddies the waters even more. What I venture as an idea is that the instrument in your shop is a very early example of what would become the PE-175. I can't find any relation to Herb playing an Aria before 1978 and that is the first year it appears in the Aria catalog. The H.E. on the pickguard of the one you have, and the owners recollection of owning it in 1975 is a headscratcher for me only because I simply cannot find any examples of Herb ever playing one with that type of headstock inlay. But that certainly doesn't mean he didn't have one, or perhaps returned it as they progressed with the design. It seems once he started using the one with the Heritage style headstock, he didn't use the one with the "Aria Pro II" straight across the headstock again.

So, I hope this has been as confusing and mind twisting for you as it has for me. I think the only real way of knowing what exactly is the guitar in your shop, is tracking down someone that worked at Matsumoku in the early 70's onwards. Perhaps contacting the fellow from the first link I provided in the reply (the one which shows the same headstock as on your example...that certainly seems to be the most unique feature) may help as they even state they'd like to know more information on that guitar. The PE-185 designation is likely something of great interest.

firstly the repair: all files I had were way too thick so I contact glued 2 strips(10cm x 3cm) of 180 grit, hookit backed, sandpaper which came out quite rigid. This was placed lengthways in the gap & gently moved left to right not inside to out side. As ca glue was applied with old binding on only a couple of drops had actually got into the join - with other nibs of glue probably original glue & a few crumbs of plastic from old disintegrating binding & probably a few bits of dirt & dust from inside the guitar.. Job done in 1 minute!! The need for caution is obvious when approaching such tasks without experience - however sometimes I tend to forget I do have 30 yrs working with wood.

On close inspection of the lacquer I think cracks around the neck & some of the hairline cracks are simply movement in the wood - after all it is 40 yrs old. I will know more when I finish repairs & sand lacquer with superfine paper & polish it. Lacquers crack up after 10 - 15 yrs because they set hard & are less flexible than the wood they are adhered to - different expansion co-efficients. These finishes are not suitable for anything that is going to become "antique" & collectable.

Back to identification:  this model was sent around various music shops as a demonstrator to generate orders. I am begining to believe it may be one of the first prototype Pro 2's made & as such subsequent models may easily have minor variations. The neck is still straight as & I think overall condition will soon be quite good for it's age & use. I would like to buy an endoscope at some stage - I already had the idea in mind 2 yrs ago as I have personal experience with several examinations(bladder cancer) - iso cyanates. Just had 1yr all clear - thanks to early diagnosis.

Today I will glue the join(titebond) & next will be new binding.

Sounds like you're getting along fine with the repair thus far. And I think with the early acquisition date of 1975 for the instrument and that being the year Aria became "Aria Pro II", I think it being an early prototype of the "Aria Pro II" is correct...

Ugh...I just realized the one I linked to that "shares all similarities to the one in your shop" has a venetian cutaway. Oh well...

check out the link above for some choice music mostly played on this guitar by the owner - Bobby Blue Shankaran.

Permalink Reply by Rob on December 15, 2016 at 7:54am
Hello, I have Emily Remlers Aria pro 2 Herb Ellis, which has PE-185 as a model #. I live ln New Orleans and have had it since the mid '80s. I've always wondered about this, thought it was a typo error or something. This is the first i've heard of demo models or anything. Thanks for the info. Rob Bauer.

Variations on a theme: I think many of the inconsistancies & evolution in design were most likely due to the fact that copying top brand guitars was a rapidly growing young industry & copyright laws were growing with it. The earliest prototypes ( as this one) were very close copies of the major brands & it is likely changes were made ( headstock) after a phone call from Mr Gibson's lawyer. Just my opinion. It is due to the design of Bobby's Aria that I believe it was the very first one made.

I am keen to hear more of these little known & often under rated copies.

Permalink Reply by Rob on December 20, 2016 at 9:47pm
Hello Dean, Here is some pics of my guitar. It's identical to Bobbys down to the rotting binding, which i had to remove, it pretty much popped off. I replaced
the tuners and the nut. Whats really interesting is the serial #, his is 78010375 mine is 78010362 it looks like. What i remember when i bought the guitar, from a local jazz guitarist, he told me Herb Ellis gave this guitar to Emily. It was 30 years ago so not that big of a deal back then, they were both still alive. Hope the pics upload ok. Rob
Attachments: 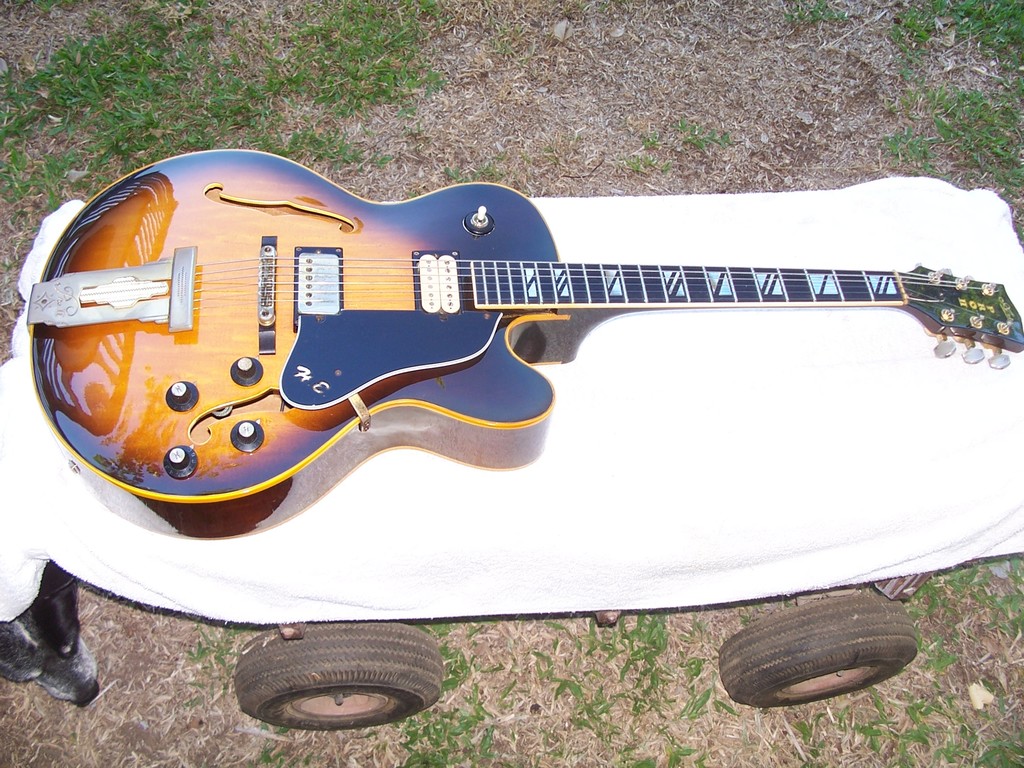 thanx for pix. I spoke to Bobby this morning & we are both excited & surprised that Herb's guitar has surfaced.

One thing that astonished me was no lining strips inside Bobby's guitar - plywood sides, top  & back butt joined - so when binding decayed only 2 or 3 mm of join left!

Not  sure what the serial #s indicate - both these guitars were in existence before 1978. I had thought 75 was yr of mnftre - obviously not according to other serial #.

Thank you very much for sharing info & pix.

Enjoy food & friends & above all the music of the season, 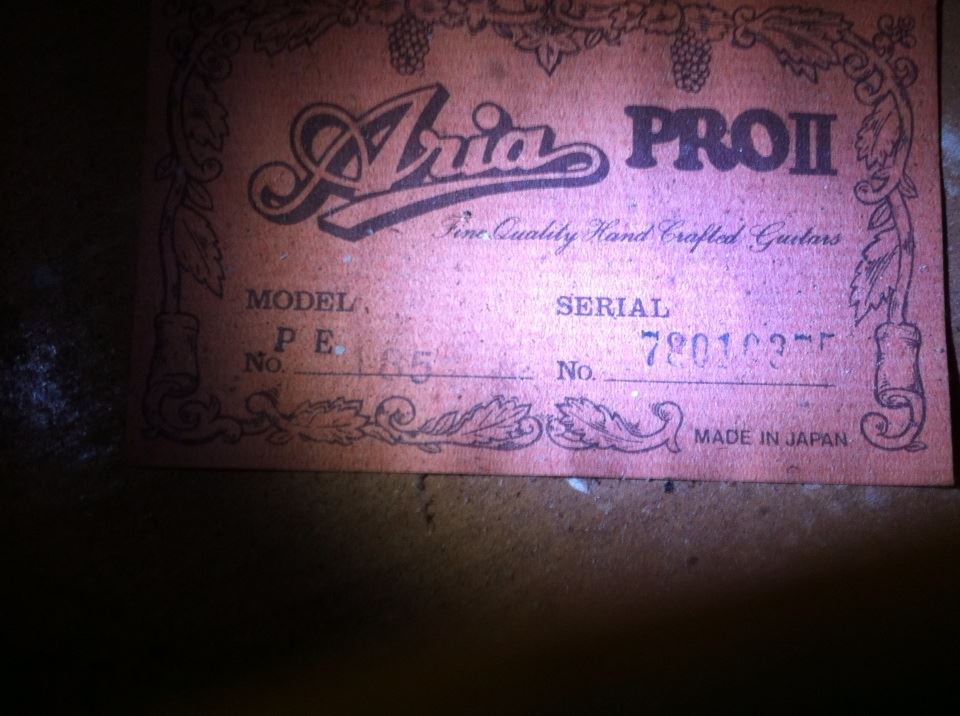