I have fancy curly maple for one mandolin back and thin maple for ribs (sides), spruce for two tops at least, ebony for fingerboards and headstock overlays, and bridges. I have roughed out two maple necks and two mahogany, have tailpieces ordered and Grovers one gold and one nickel sets. I have some 3/4" thick black walnut that has been on hand for many years, and that has always been one of my favorite woods. So I'm moving toward one maple b&s, maple neck, englemann top and one black walnut b&s, mahogany neck.

Having never bent anything, I'm very wary when I read that black walnut is difficult to bend. How difficult? Are there any special precautions that will make success more likely? The walnut I have is pretty straight grain, board sawn. I have some round pipe-like things I could torch heat, and a pressure-cooker steam generator of rather low capacity (which I could increase). I wouldn't really welcome a side track to build a steam chamber like I've seen illustrated somewhere, made from pipe, as there's so much work ahead already.

Permalink Reply by David Newton on August 9, 2008 at 7:47am
Hi Herb, welcome back to building.

A steam chamber is a waste, you won't be able to get the wood to a good temperature for a long enough time. You could make it work, but it just isn't a very efficient use of your time and energy.

Either do a bending iron, a pipe with heating element inside (made from a electric charcoal starter) or a heating blanket.

Black Walnut is a joy to bend, find the right heat, which isn't that high compared to other woods, and it bends easily, and smells great too. You couldn't pick a better wood to build with for getting back into it.

Permalink Reply by C Herb Hickman on August 9, 2008 at 8:02am
Thanks, David. What diameter "pipe" do you suppose would work or be best? I don't seen any really tight curves in the F-style except in that scroll which is formed by a solid block in the tightest portion.

I'm sure there are going to be a lot more questions, before this is over.

Here's my hot pipe for bending sides....(pipe is inch and a half dia. galvanized from Lowes')
I'm forming the scroll for a F-style mandolin (my first!) 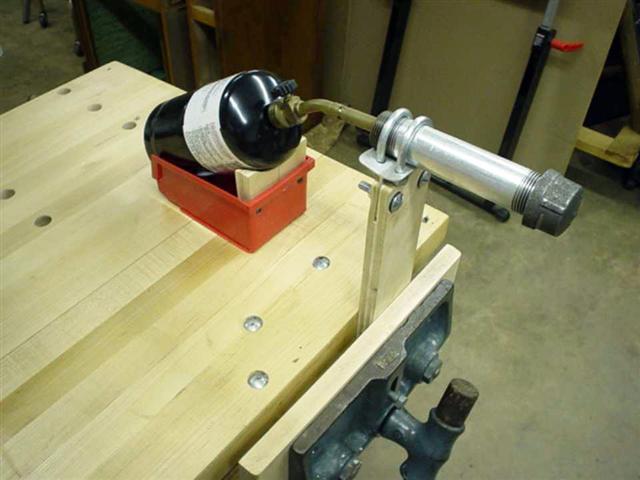 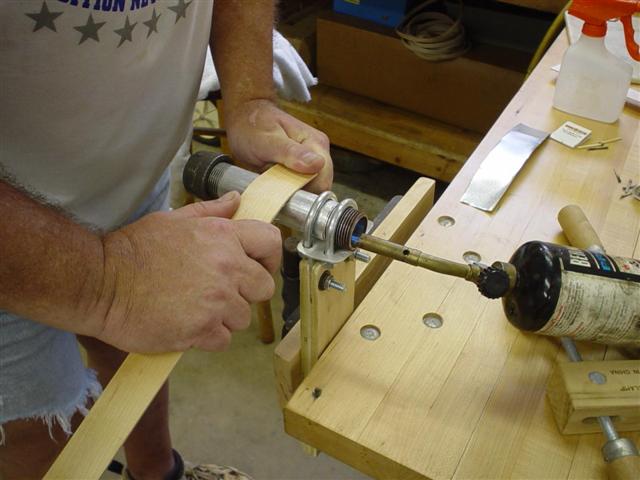 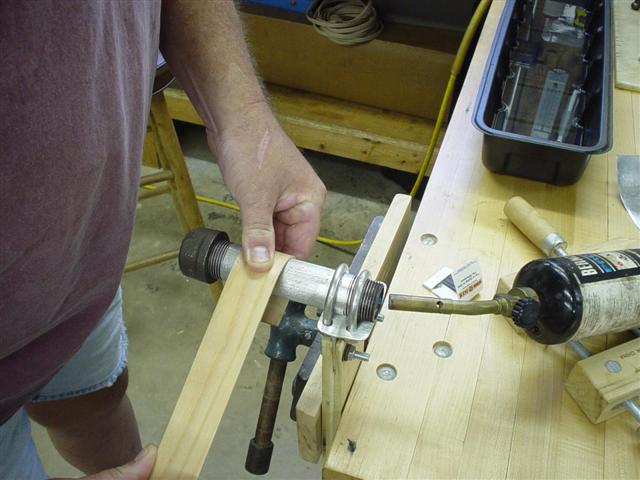 Permalink Reply by C Herb Hickman on August 9, 2008 at 7:18pm
Thanks. I guess it's possible that someone with such a neat and tidy workbench COULD be doing things right! Can you bend down to a radius almost as small as your pipe? I've been saving a shiny steel tube that came from a treadmill I wore out last year. I'll dig it out and check how big it actually is. There's a limit to how much you want to heat galvanized iron, but I imagine the temperature needed for bending is far lower than the temperature where the zinc will start vaporizing off into your breathing air. I don't recognize that flange that the U-bolts anchor into -- is that special hardware? I guess a simple angle iron could also possibly work, no?

Permalink Reply by C Herb Hickman on August 10, 2008 at 4:48am
It's HUMOR, Mike. Most all of us acoustickers joke about the messy state of our shops. Your picture spread is in my opinion an excellent contribution to this new forum. Thanks again.
Herb

Permalink Reply by Bob Gaddis on August 11, 2008 at 8:41pm
The pipe has to be heavy enough to hold heat evenly and not flex when you apply pressure. I'm thinking your chrome-plated treadmill pipe might be too thin. You could find a piece of scrap stainless steel pipe if the galvanized is a concern. I have apiece of heavy, thick-walled aluminum pipe that I use.

When working with open-grained woods, you may want to use a strap to help keep the fibers compressed when they bend.

Permalink Reply by C Herb Hickman on August 12, 2008 at 10:01am
Yes, I can't tell how thin the wall is in the treadmill roller, but it's hardened and I don't relish the idea of trying to hacksaw it. I'm not worried about the heat on the galvanized, though a person who just left the torch on it in a closed workshop could conceivably get zinc fume in his breathing air. I like the polish on the treadmill roller, though. I'll check the metals dealer where I buy aluminum to see what kind of tubing they have lying around there. Still got a few days of work before I'll be at the bending stage. I understand now that bending the black walnut is not to be feared necessarily.

Somewhere I read that a black walnut mandolin was not as "powerful" acoustically as one made of maple. Guess I'll find out.
Thanks
Herb

Permalink Reply by Donald A. Fortune on August 11, 2008 at 11:26am
Greetings Mike, Not to get away from Herbs origonal post, but I thought this might be a good spot to ask this question......
can you give me a good idea as to how small a radious that the walnut will bend?? and also what do you put the material in before you bend it????

The wood in the pics is maple (haven't tried walnut yet) and I can (slowly) get the bend pretty much as tight as the dia of the pipe (see pic #4)....with a bit of spring back, plus you'll have to have a form to keep it in till dry.

I soak the strips in distilled water (the minerals in tap water will spot or stain the maple) for about 10-15 min before I start to bend. The black tray you see in the pics is just an inexpensive wallpaper tray from one of the borgs. 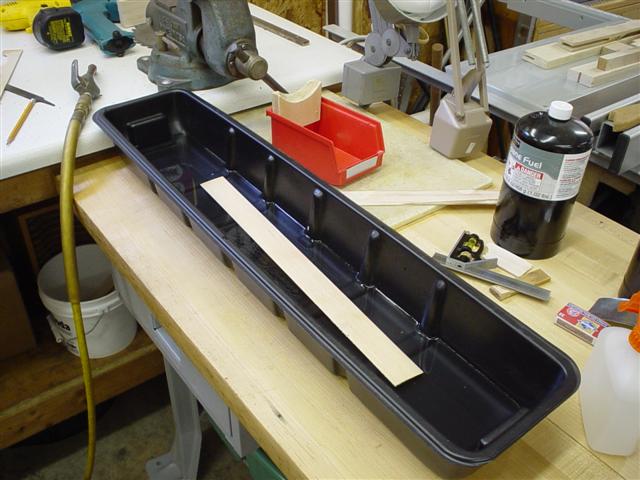 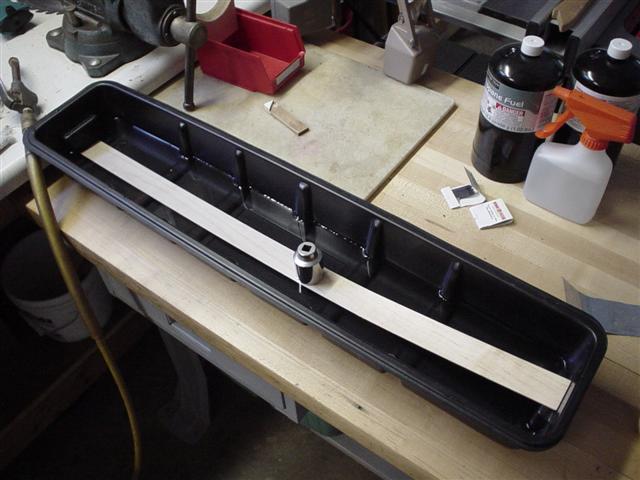 Permalink Reply by Donald A. Fortune on August 12, 2008 at 9:54am
Thanx Mike -- good info -- I have one other question for ya--
Is the water in the tray hot or cold or somewhere in between??