I have no experience with PID but, If you know anything about Arduino this might work for you:

Thanks Paul, that could be helpful for future projects!

I think I'm done specifying this project and project I will be able to build an automated temperature control with thermocouple sensor for about $30 not including the enclosure. I'll use IEC power connectors and such to make it safe.

So far I've ordered from eBay:

All with free shipping. I kind of feel bad for domestic manufacturers as I'm sure these are are being dumped below cost (or at least way below retail), but this is the world we live in.

I still need a panel mount K-type female connector for the thermocouple. May have to get it from Mouser. The c100 will only display centigrade and has to be modified with two jumpers to run a solid state relay, but that's not a big deal as there are lots of YouTube videos by homebrewers, television engineers, and DIY 3D printer builders. 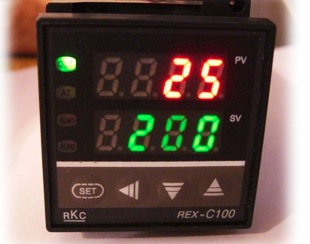 Probably take a few weeks to get this stuff from China. When I get it working with a heating blanket I'll put up some photos, a wiring diagram and parts list.

Must see how well this works. I need this set up desperately. BTW no link visible.

Link?  I just found JC Clark's article from Guitarmaker 2006 on building a controller. His controller is dated and no longer carried by his supplier so I guess technology moves on:

That list of supplies looks like it will do the trick.  Arduino is about 30 dollars and needs a Linux installation, knowledge of C++, and is probably not the simplest option.  Also I don't think it comes with a nice LED display, or buttons like that Rex-C100 does.  The simplest option would come from Luthier's Merchantile of course, albeit expensive.

I have a RenaissanceLute In my Rex 5000 3D printer right now...brb

What material are you printing?

I learned Basic in college a long time ago and advanced calculus when I was 40, but I don't think I have it in me to learn C++ ;-)

If I had the dough I'd call up LMII but, as they say, necessity is the mother of invention.

built one of these last year using mostly the same components. works great.

the controller came with a nice schematic to follow

be carefull where you place the thermocouple, it will leave an imprint in the wood. very hard to sand out

Cool! Do you have a photo? Could you tell me how you use the thermocouple? I was thinking of putting it between the heating blanket and the caul holding it to the fingerboard.

believe it or not iv'e only used it once

Permalink Reply by Frank Capo on August 21, 2013 at 4:48pm
Not intending to hijack this, but can folks post what they believe are the safe maximum temperatures to avoid damaging lacquer finish when applying heat...