Thanks for the information. I guess until the controller and SSR arrives this is all theoretical.

I am going to modify the Rex-C100 to convert it from relay to SSR:

If anyone wants to do 240v I've attached a kiln circuit I came across.

Also, the rear connections for the controller. 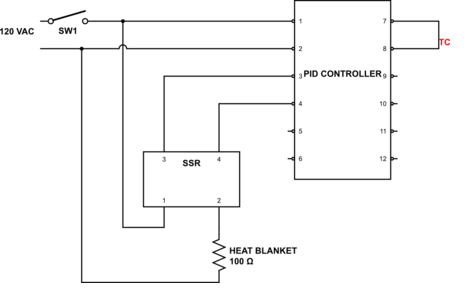 this is how mine is wired

you can add fuses if you want , place on hot side of plug

also a timer can allow you to get destracted

just place it between the cord and outlet, ten minutes later it turns off if you get distracted

Ned...you just blew my mind. I'm a pretty rotten schematics reader and I can't see how the schematic indicates how the relay is reversed. You're saying the circuit is on by default and when it reaches the target temp it turns the blanket off?

A safety aside - my understanding is that the SSR has to receive the trigger current to close the Hot circuit and provide + to the blanket (and that it must be the hot, not neutral, for safety reasons: http://www.phidgets.com/docs/Solid_State_Relay_Primer).

Now, the Autonics TOS controller that JC uses has 3 relay terminals - 4, 5, & 6.  5 is "L" and 6 is "H" which I suppose could offer 2 states allowing an SSR reversal. I'm totally over my head here and welcome any clarification.

Sorry, I didn't mean to alarm you. I just thought you might want to take this into consideration.  I didn't read this on the schematic, I read it in the documentation. Without knowing the pinout on the PID there isn't any way to see it on the schematic. In the text, the maker says;

He's using a mechanical relay on his device. What he's using is a relay that is closed until it is energized when I would have used a relay that had to be energized to be closed. In this case the voltage on the relay would need to be applied until the TC signal reached the set point on the PID, then the voltage on the relay should be dropped. I can't tell you how to do this on the controller you have purchased but the info sheet you posted indicates that the ON/OFF cycle on the controller he used should be able to power the relay until the temp is reached then  shut it off.

Anyway, the whole point is that it would be safer to create a tool that won't heat if the control circuits are not working properly.

BTW, I also noticed on the SSR  information page you linked to, that  when SSRs fail, it is usually into a closed circuit which would leave the connection to the load (heating pad) ON no matter what the controller was doing to the rest of the circuit.  I'm not saying not to use an SSR but  it is something that a un-powered/open relay would not do. Of course that's easily solved if you just remembered to unplug the bender when you are finished.

Thanks, Ned, for the insight and conversation. No worries...I'm always open to having my mind expanded even if it feels like my head is going to explode. ;-)  As I was having my afternoon coffee it came to me that there must also be relays that are closed by default and that open when energized.

You make a very good point about the fail state and safety. If I used two relays, one for hot and one for neutral, then if one relay were to fail the other would still function. Unfortunately, the wiki on SSRs says its not safe to switch the neutral. The great thing about solid state relays is that their duty cycle is usually millions of on/off cycles.  Nevertheless, I'm thinking about putting a timer just after the fuse like this 20 amp model:

The timer is rated 20a x 120v = 2400 watts. An LMII side bending blanket is only 700 watts (and is the largest they sell in terms of wattage).  The SSR is rated 25a at 380v which is 9800 watts. So, generous safety margins all around, especially considering there is no power-on surge for resistive circuits like heating blankets.  I'd like to put a MOV across the incoming power hot and neutral to protect the c100 controller but these don't work unless calibrated to the task and I have no idea how to do that. I could break down and use a surge protector but I'd prefer to make the unit robust.

Nevertheless, when dealing with things that can start a fire, unplugging is always good procedure.

I doubt that you need two relays unless you were going to put a mechanical in between the the power and the SSR which would probably be overkill. It's not like you're going to be running this all day, every day and I only brought up the SSR failure to 'ON' as an fyi.

I think the circuit that Keith drew is the one to use. It's simple and straight forward. Adding a timer would be a simple and effective safety for the system.

I know...I just like to pretend I work for NASA ;-). Maybe I'll build a plexi enclosure and put some flashing rope lights in it for good measure!

OK,ok, Robbie... it's not a Gamer PC mod. You don't need neon lining the case or a huge fan to cool it down. ( although this controller might work well in that environment too... hmm...)  Um... lets remember that it's just a side bender.

NASA... you're going to need a robotic arm, some gold film for heat/radiation shielding... maybe a small nuclear reactor for power....

I'm a sucker for the Jules Verne/Steampunk/Rube Goldberg approach.

Eventually I hope to bend sides. Right now, I need to remove the fretboard on a 66 Trini Lopez I detailed on another thread. It's too valuable to try the household iron kludge and I'm worried about melting the binding.