Help with a bowed Valco/Airline bolt on acoustic neck needed.

Presented for your consideration..........
I have a Valco/(Kay?) made Airline A720 acoustic with the maple bolt on neck. The guitar assembled, under full string tension bows up behind the 12th fret.  I'm able to get the fingerboard FLAT between fret 1 to 12 adjusting the truss rod.
Anyone have any hands on experience with these Valco necks or know of any issues?  Or have seen this condition?
I don't have any back history to draw from, just what I see.  I went through some repairs to the body and it is now solid, and not a issue to be worked around other than to properly shim the neck when the neck issues are dealt with.
I took 3 sets of measurements.
With the guitar fairly playable ahead of the 9th fret ( .130 @ 12th) and the Ernie Ball Medium Light (12-54) strings at full tension. I have the truss rod set to flatten the fingerboard between frets 1-12. A visible bow existed behind the 12th to the 19th fret. I set a straight edge from the top of the 5th to the 19th fret. This created a gap of .016 at the 12th fret.
The second measurements were taken with the strings off, and the truss rod unchanged. Now between frets 1-12 the neck has a back bow. The pivot point is at the 5th fret. Behind the 12th fret there is still a up bow. Again with a straight edge between the 5th and 19th, we have a .014 gap over the 12th fret. A visible bow up behind the 12th fret. A visible back bow from 5-1
.
The third measurements are taken without the strings and ALL the tension off the truss rod. Now the neck has an up bow at both ends. Repeating the measurement from 5th -19fret there is a gap of .023. Adding a new measurement with the straight edge across the 1st-10th fret. .008 at the 5th fret.
Also using magnets the metal truss rod ends around the 17th fret..
I'm wondering if this is a result of a hot environment under string tension?  Or what may have caused this condition.
Tossing around the idea of warming the neck/fingerboard joint from say the 10th to the 19th and clamping it flat again. Or the entire length.
Maybe removing the board completely and remounting.  This would give me a look at the truss rod set up inside.
I believe this neck was made before the Valco/Kay merger.  A repair friend showed me pictures of a Kay Speed Demon neck with the board off and a simple single small block inserted on top of the rod in the curved out channel to force the initial bend towards the middle.  But I don't know if Valco could have taken this same low end approach,. 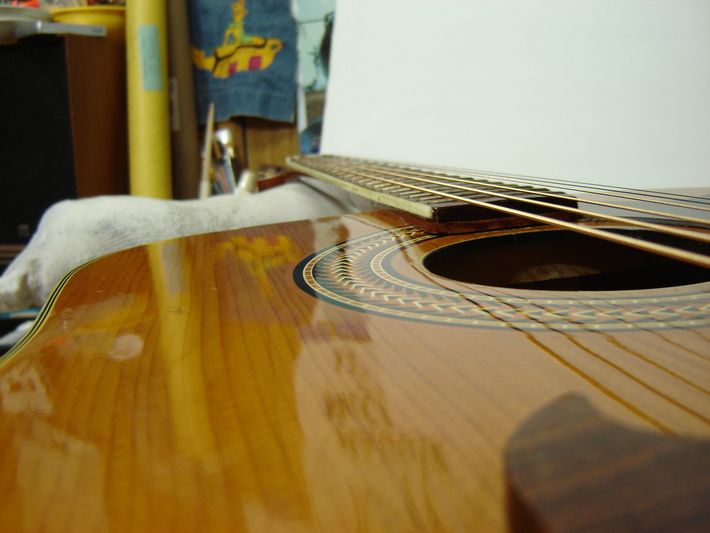 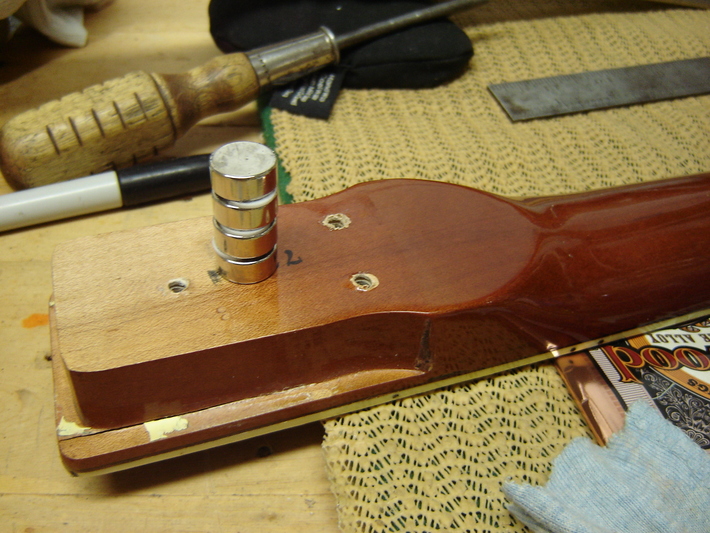 I'm seeking first hand experience and any insights into how to deal with this issue. 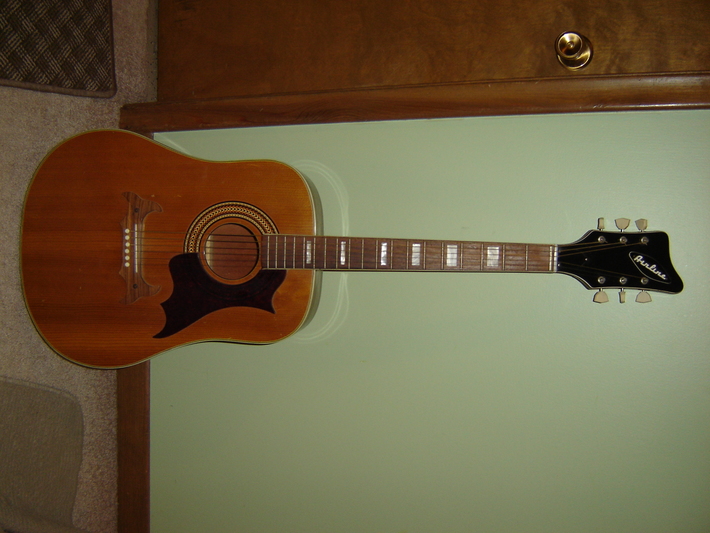 Most advice on these guitars is "wishful thinking"  - they are cheap and nasty and all have neck problems including this kink at the body where the fat part of the neck stays put and the rest of it flaps around in the breeze.  The truss rod is marginal at best and will just lever the neck around the body join area.

Most of the senior guys on forum know this well and, unless anyone has any better ideas,  it's a case of remove the board, machine/plane it flat, stick some carbon fiber reinforcement  in the neck and see if you can reclaim the fingerboard (pull the frets, level the board, re-radius it and refret it).

Probably not the popular answer John but its the one that works.   The alternative is to pull the frets, level the board and re radius it before refretting - you will run into problems with the binding depth disappearing at both ends and the dots getting close to the top and there is no guarantee that the dodgy truss rod is going to step up and do the job any better than before.

In our experience this genus of guitars can be money pits for little discernable tonal reward.  However if you have time and conviction they can be got back into playing condition.