Permalink Reply by Frank Capo on August 15, 2013 at 6:04pm
I also am working on a Mossman GP neck set project. Neck joint has been canted by string pull. I am close to having the neck off and will have to reengineer the bracing at the notorious feet... I will post some photos soon and look forward and will hopefully benefit from seeing your reset. I am a bit over my head on this...

My main player is a 1975 Mossman flinthills. I picked it up at a guitar store in Fort Collins CO back about 15 yrs ago and had to have the neck reset before it could really be played at all. It suffered from the notorious badly designed top bracing where the neck meets the top. I was told to take it to a luthier in nearby Cheyenne, Wyoming by the name of Bob Westbrook. Apparently, Bob had lived in or near Winfield, Kansas (where Mossman guitars were manufactured) and had performed many a neck reset on them.  I'm sure some of you folks probably know him.

Anyhow, he had a dandy saw that he had designed that was two pieces that could be assembled inside the guitar. He used the saw to cut out the "feet" portion of the neck block so that he could install a normal top brace.

I'd be glad to post a picture of the "post repair" top bracing if it would help you out.

I absolutely love my old Mossman guitar. It's a real banjo killer in a bluegrass jam!

Permalink Reply by Frank Capo on August 16, 2013 at 3:23pm
I have seen pix of several remedies for the Mossman "agony of de feet"... Some pretty extreme like cutting a hole and chiseling into the feet from under the fingerboard tab.

I was thinking that perhaps using a tool like the vibrating multi tool, and plunge-cutting with a thin blade through the top under the fingerboard tab (neck removed of course) to square off the neck block and cutting off the feet for removal. Flames wlcome. Then rebrace and re neck.

Mine is a 12 string GP some type of rosewood that shows signs of severe top checking. I think i would eventuly like to (yikes) refinish the top. I would like to see your work and soon will post mine. Thanks

A 1965 Harmony made Silvertone Classical. Spruce top, mahogany back and sides, brazilian headplate and bridge and ebony fretboard. An odd duck that was only offered in '64 & '65. It is identical to the Harmony h174 save for a checkerboard sound hole ring.

Here is the happy result of my guestimate as to where the dovetail pocket on this steel string / classical hybrid guitar was. A short scale, 12 fret guitar put the pocket almost directly between the 12th and 13th frets.

As always, hats off to Frank Ford for showing the way.

It has an Oak neck block, hard as the hubs of Hell and took some elbow grease to sand the faces nice and flat. 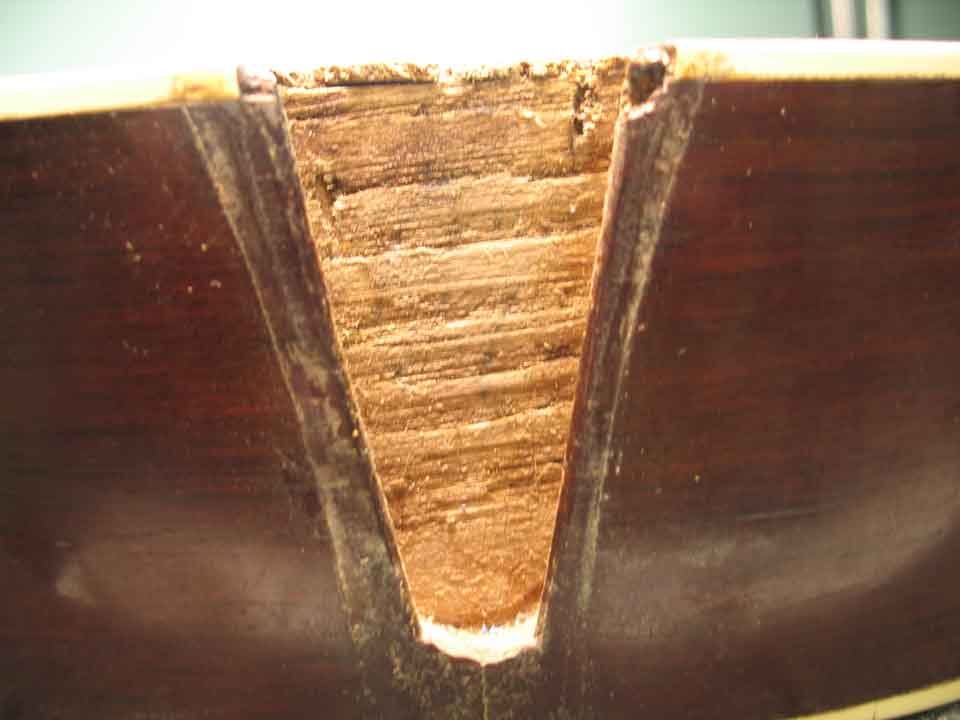 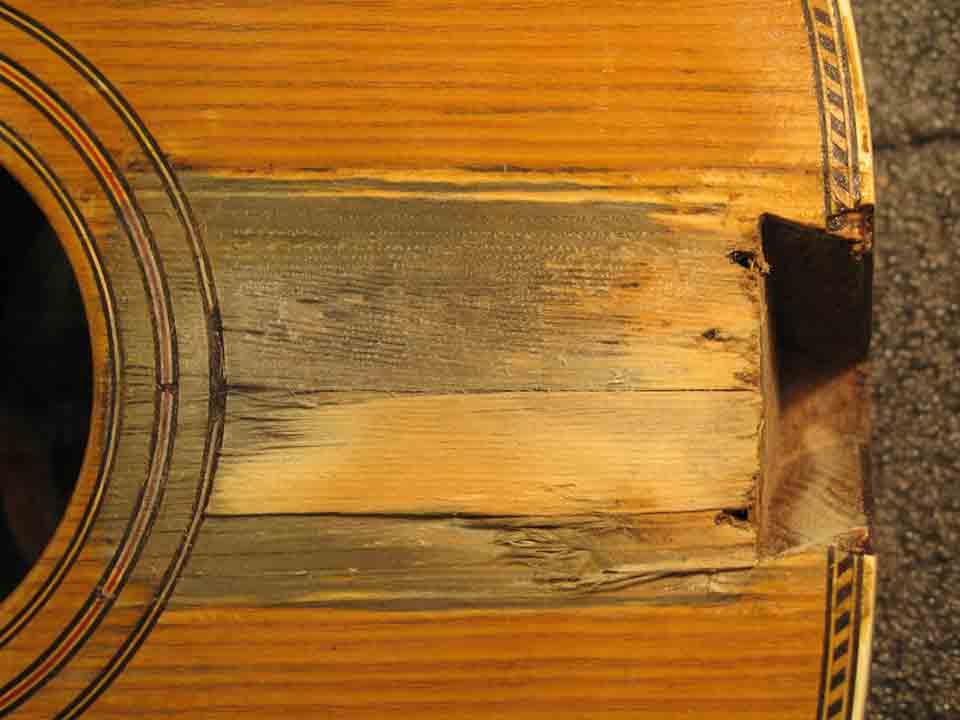 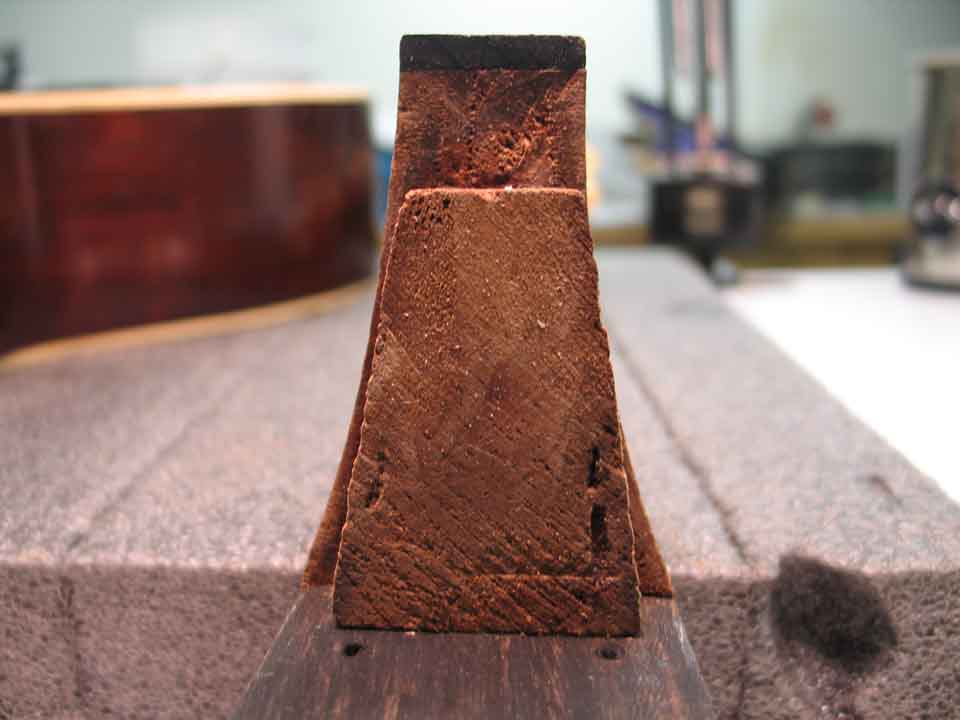 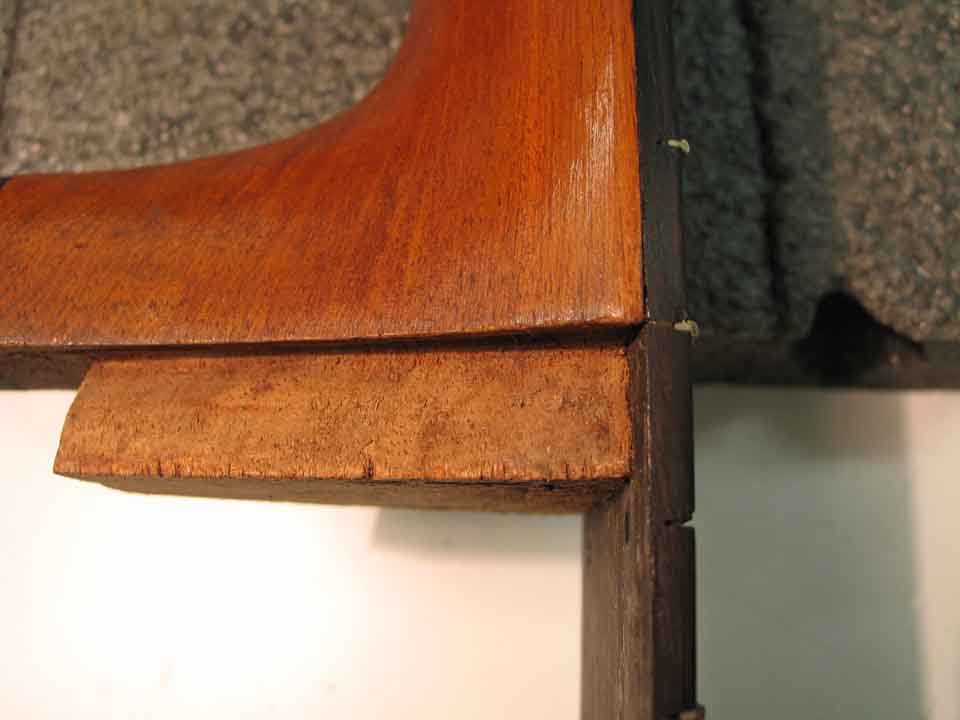 Dimension from 13th fret drillings back to the Dovetail. 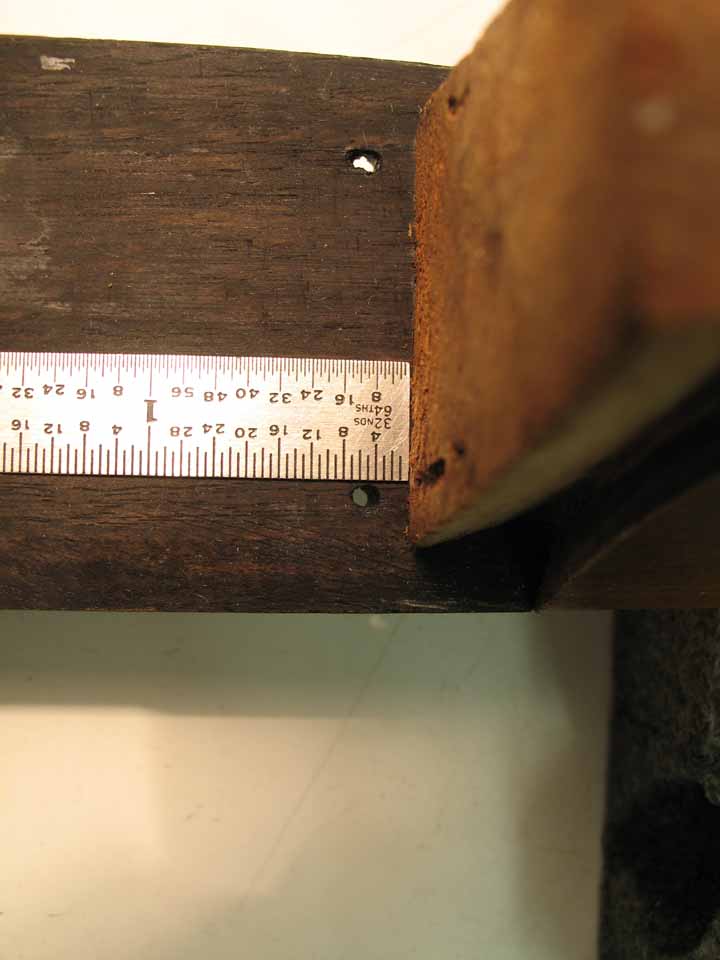 Paul, Is that missing the tip of the tail? It looks too short and square. I've experienced trouble getting necks to stay seated on a couple of instruments where tail on the neck was too short for the slot.

Ned, thanks for your observation. The end of the dovetail is perfectly flat, not broken or un-level. The joint was hide glue with the exception of a portion of the finger board extension that looks like it was lifting at some point and just stuck back down with Titebond. I don't see any clues that the neck was off before but can't be sure about that. It does seem a bit skimpy at the narrow end of the dovetail but I believe that it was made that way. The 115 Washburn was no where near a flagship model, not quite at the bottom of the line but a low end production model none the less.

It would not be worth the extra effort to improve the dovetail. I use Aquila Nylgut strings on this instrument, they are low tension and are designed to simulate the gut strings that this guitar was originally designed for.  I'm confident that a well fitted shim job will be sufficient.

If you like the nylguts, you might like to try Seguar Flourocarbon fishing leader - it really sounds good, and has an incredibly even tension. I use it on most of my ukes, and the tone is great.

I don't think it would be possible to use fishing line or  leader on a 6 string, the low E would have to be a real fatty! I know of folks that use it on banjos with good result but I think I'll stick with the Aquila's.

Oh yeah, I guess I meant just the plain strings, but I didn't actually say that.

And they are indeed wonderful on banjos.

This is a great resource.  Is there an index or a list of the guitars represented?