Traveler guitars - anybody have experience with them?

I teach guitar lessons and have to lug a guitar around a lot. I finally decided that it's getting to be too grueling having to carry my regular guitars around, so I recently took a chance and bought a used Traveler brand guitar (the 'Pro Series' with a piezo and a single coil) from Reverb.com.

Aside from the fact that the neck isn't straight and some of the frets are flat, I'm having issues just tuning the strings. There isn't really much fine control, and it just doesn't seem to be stable. I don't know if the overall system is to blame, or just the tuners themselves, but I suspect that it could be both. It is a headless design. The strings run over an acoustic-type saddle (with notches), and continue toward the butt end of the guitar where there is a set of 6 rollers which spin on an axle. The strings rest in grooves in the rollers, wrapping around the rollers and doubling back around to the back of the guitar where they attach to the tuners, which are contained in the body.

The individual rollers do seem to rotate around the axle when a string is tuned, but maybe the friction along the portion of string which rests on the roller prevents even stretching/contraction of the string during tuning?

Anybody have any thoughts about this or experience with this design? If I was confident that upgrading the tuners would make a big difference, I would be willing to replace them, but I wonder if maybe this in-body tuner design is just flawed due to the rollers.

I considered something like a Steinberger, but this Traveler guitar is lighter and cheaper. If I find the tuning stability can be improved, then I'd feel it's worth my while to level the fingerboard and replace the frets to get a playable guitar.

Any thoughts? Thanks in advance! 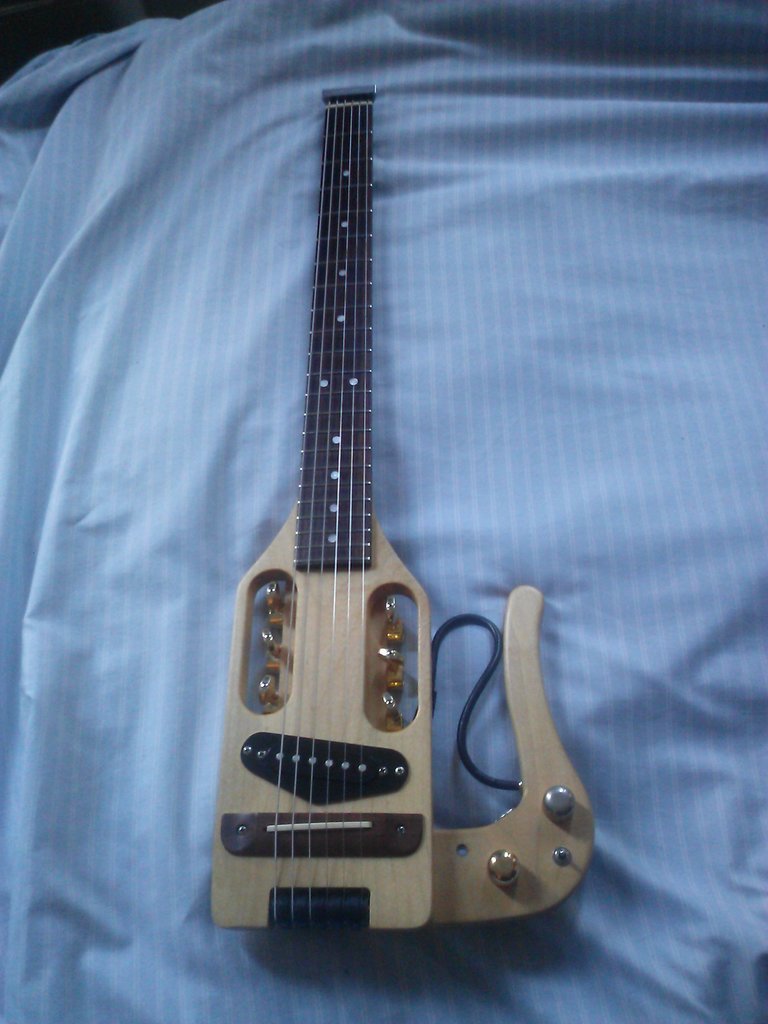 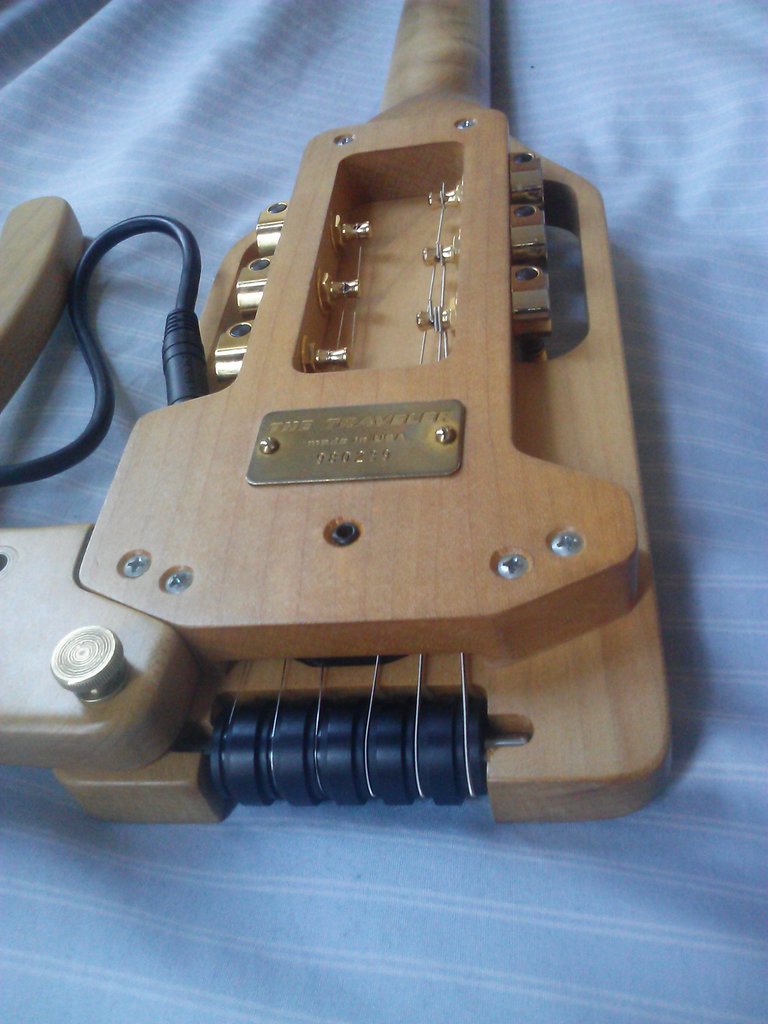 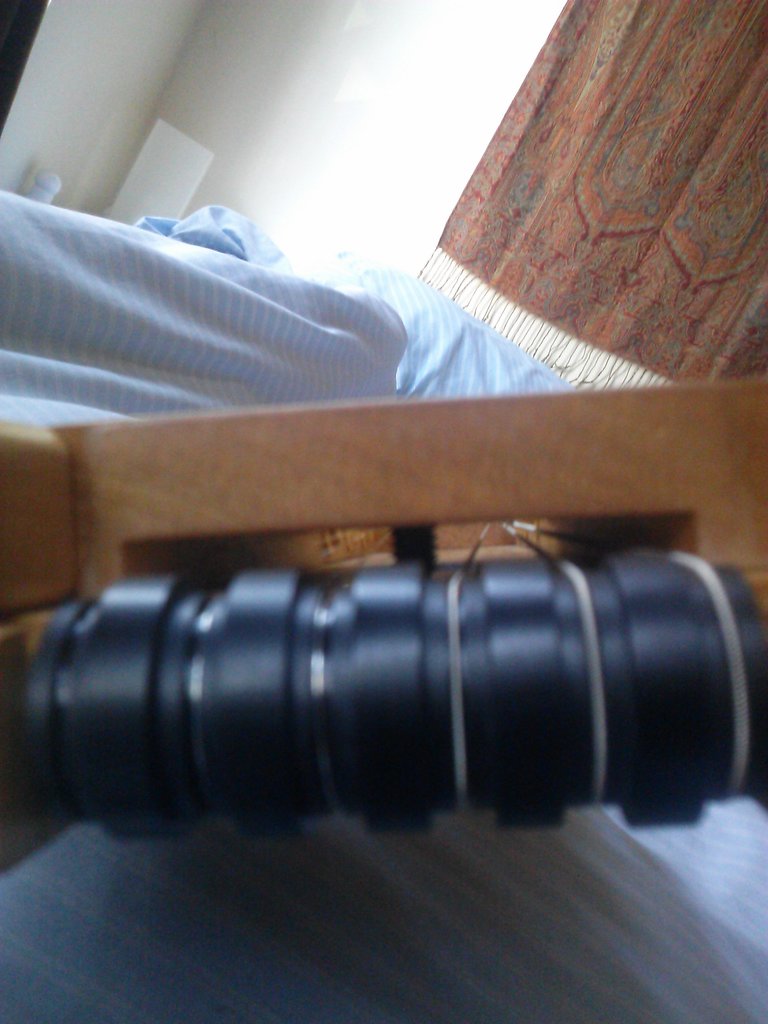 It's not just that the rollers spin freely when there are no strings; once it's already strung up, when I adjust a single string's tuning, I can see the roller move. I'm wondering if I should lubricate the areas where the strings rest on the rollers. Maybe the tension between saddle and rollers does equalize itself with the tension between rollers and tuners, but the portion of the string contacting the rollers doesn't. I might try some Dr. Duck's Ax Wax. Think it's a good idea? Of course I will also do what I can to minimize friction at the saddle slots.

That string lock sounds like a good idea. I'm not sure I'm up to the task, though---if it moved the strings at all when clamping down, it would make pull them out of tune, making tuning difficult.

I'm having doubts now about locking the strings between the saddle and rollers---it wouldn't have any fine tuning like a locking nut guitar has. Am I missing something?

If its new send it back and have the mfg. correct it, why should you pay again. if used I would use some white lithium grease on the axle roller set up, dress the frets and expect what you have to work OK at best no more no less.

Thanks. It's used---from the 1990s according to the guy who sold it to me. I think I will try lubricating the roller slots.

I am guessing that the guitar is used Russell?  If it is,  we will have a bit different advice for you than if it's new I would think.

If it is new, there is warranty work to be done, and you should consider ditching the guitar. and see if you can get your money back.   If the axe is used, you have some definite work to get done on the guitar, or to do yourself if you think you can, OR sell the guitar on.

Speaking personally, I have never heard of this brand. but I do know there has been some conversations on some Luthierie sites about headstock-less design flaws. It is  concerning the amount of stable wood after the nut. Apparently, if there is not at least 1 1/2 to two inches of wood  on the other side of the nut, there will many times be problems with this design.

I hope some other folks here will be able to help. You description and the photos are super well done too, just so  you know...

What exactly is the problem with not having enough wood behind the nut?

Russell, there were apparently inherent problems with the fist 4 or 5 inches of the fret board starting at the nut being unstable

and the neck starting to pull up from tension .  Are you going to regret this guitar at some point? Because re-fretting and plaining the board a bit may take care of the one problem

Ha ha, I think I am starting to regret this guitar! But I take it you mean regret, as in remove the grets, level the fingerboard and then install new gretwire... I was initially considering it but now think it's not worth it as I'm becoming convinced the design is just not great (specifically the rollers).

(I'm just joking around---hope that doesn't come across as rude in text.)

Thanks again for your advice!

Let me clarify what you should be lubricating , You will need to lube the Pin/Axle and not the rollers

I can do that, too, but they do seem to be rotating properly on the axle as I tune the strings.