First off an apology because all I ever do is ask for help around here. I should do a better job of checking in more often to pay it back. You guys always have great feedback and I thank you in advance for this one.

We received an early Vega parlor guitar with elaborate fretboard inlay, several cracks, bad neck angle, etc. We knew it wouldn't be like a typical neck reset, but expected at least a dovetail or semi-familiar neck joint. But when the drill bit didn't find a gap, we decided to remove the tongue and see what was under there. Here's what we found. The thin strip of mahogony there appears to be the neck itself. No appearance of mortise or tenon. It almost resembles the Taylor NT neck where the whole neck heel is recessed into the body (if so, the builder did an amazing job.) If that's the case, it's going to be hard to dial in the right angle - pulling sandpaper won't be possible... getting the neck out at all is going to be hard.

So does anyone have experience with resetting neck angles on something like this? Thanks again fellas! 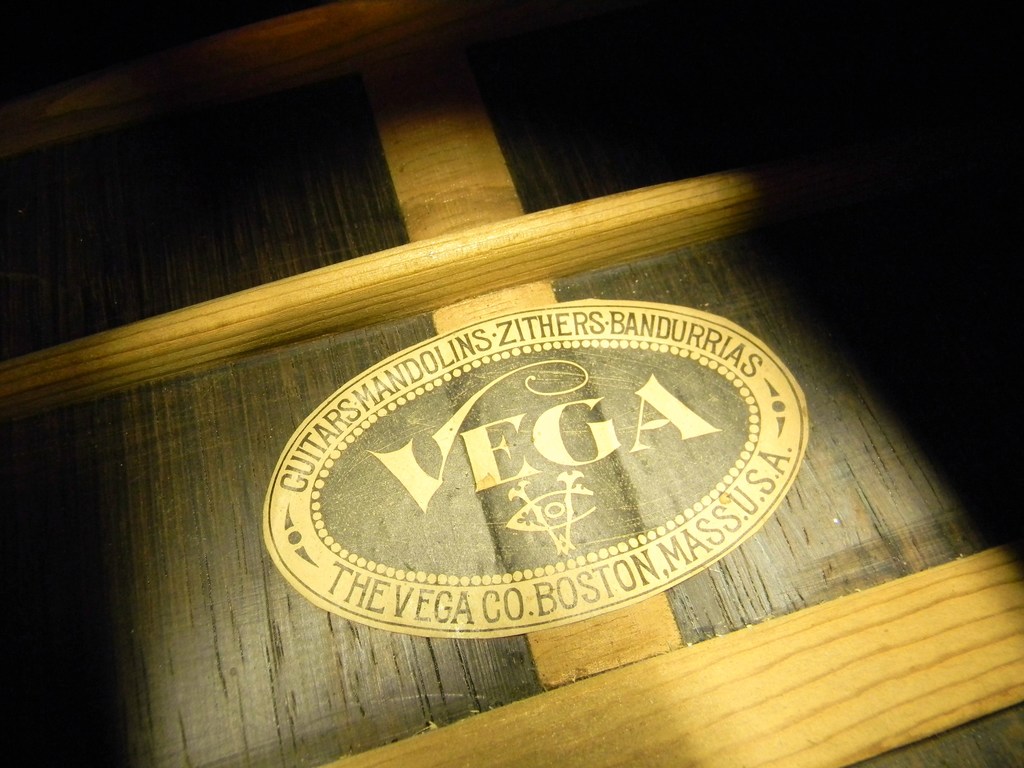 That looks like a conventional period neck joint, where the end of the neck actually forms the "dovetail."  We see those on old Washburn and Weymann guitars, among others.  It's butt-glued in there just like a violin neck.   Resetting can go reasonably well, although it's sometimes a bit more difficult to steam the joint because it lacks that pocket at the end of the neck.

I've done several like this and two hints come to mind. First apply a 50/50 mix of vinegar and water into the joint for a few days before removal to soften the glue. The second is to make a shaped spatula to insert between the heal and the block to get heat in. I use the really thin ones from Hyde. I hope this helps.

Thanks guys, that's very helpful information. I'll probably return with more questions once we're further into it, but I really appreciate the responses!

Well, the neck came out just as you guys said it would. So, uh... now what? How did you go about changing the angle? Sand a taper on a flat block maybe? 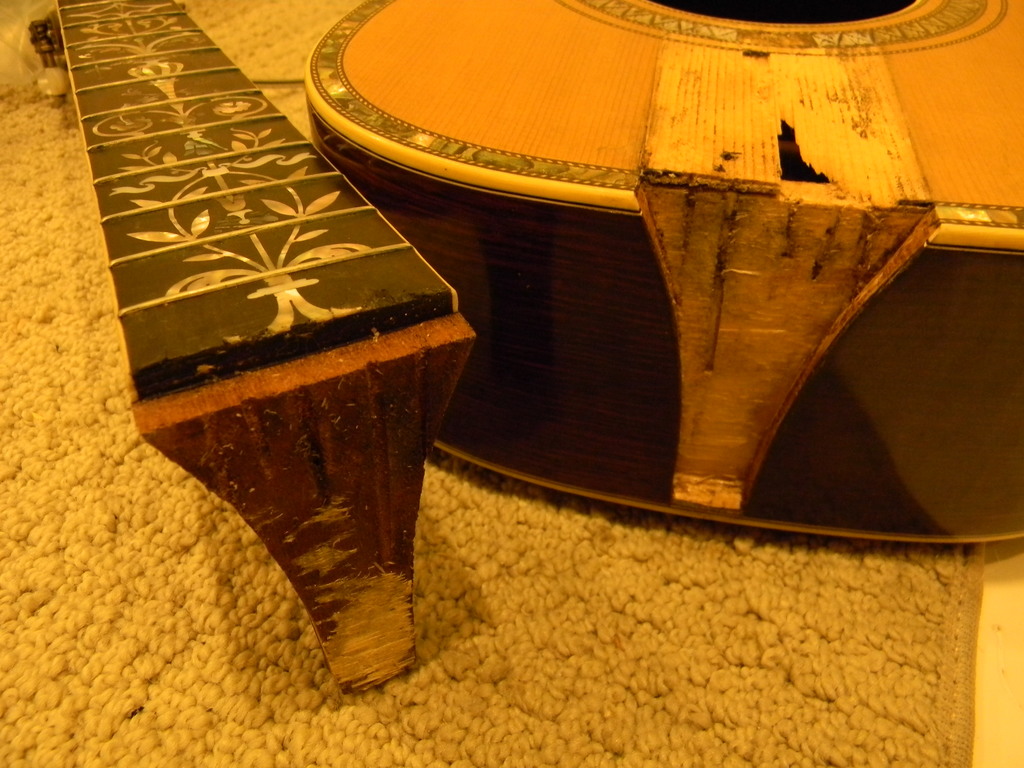 And what about clamping up? We're thinking a bar clamp or maybe creating more of a dovetail in the female side and turning it into a more Martinesque joint.

I use a combination of a thin tapered shim between the neck heal and the block, and minimal removal at the bottom of the heal to achieve the correct angle. Be careful to maintain the original orientation vis a vis centerline since the butt joint is the controlling factor here. From your photo I would be inclined to make one suggestion to you, that before setting the neck you should consider reinforcing the headblock to top connection. The headblocks on these are notoriously thin to begin with and some of that joint is greatly compromised on your guitar. In a case like this I liked to add a shaped cleat ( spruce with the grain running perpendicular to the top ) that extends about 1/2" past the block on each side and tightly fit against the block to reinforce the connection. As far as the dovetail idea may I suggest you think about how hard it was to disassemble this joint. Does it really need to be improved? For clamping I've never needed more than the one "C" clamp pushing the neck down into the joint. Just watch your dry fit. If it's good you're golden.

So, You never use any shim material on the sides of the "dovetail" only in the "butt" side?  I've done hundreds of neck resets on old martins and I'm just having trouble visualizing how the male portion of this joint will pull into the female side for a good tight joint. I feel like I'm missing something here..

Downward pressure is all that is needed as long as you have a tight fit. I press the neck into the block by hand (two flat surfaces mating) and then clamp. The real strength of this joint comes from the sides of the heal anyway. It would be unusual to find the need to shim the sides of this type of joint if it had been fit correctly in the beginning as your not removing much wood to achieve the correct set.

One added note. Unless you are replacing the bridge, check the scale length nut to saddle as that will help in determining the correct headblock shim size.

Just began work on a Vega here in the shop. Not as nice as yours and in serious need of repair. Photos attached. 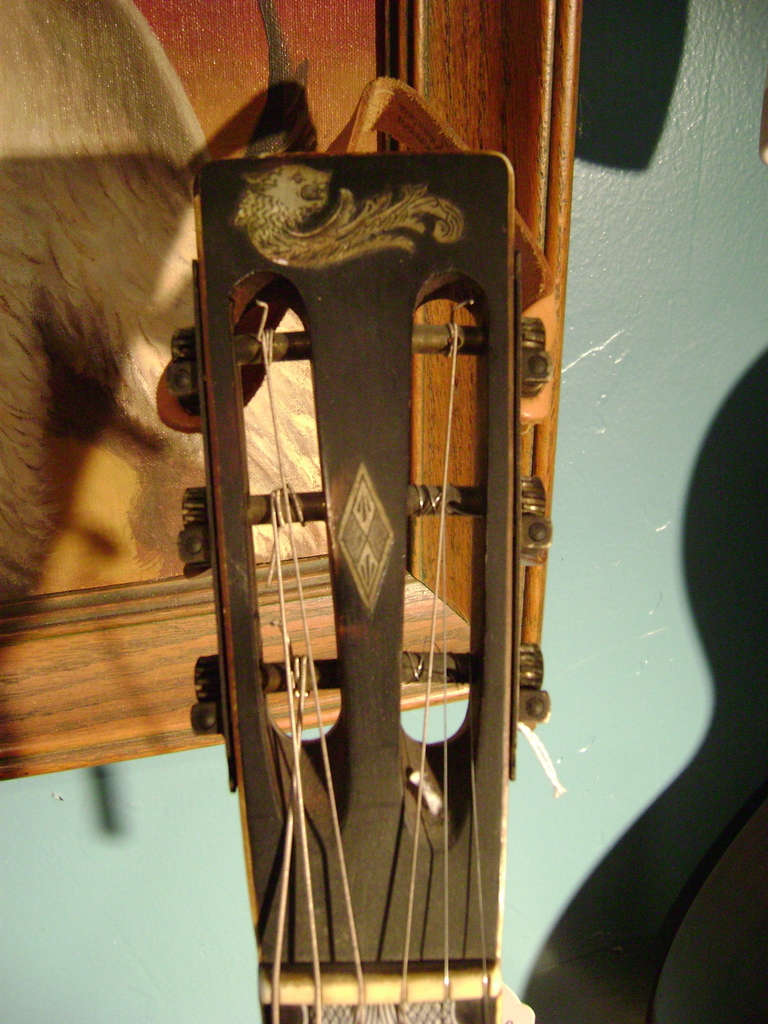 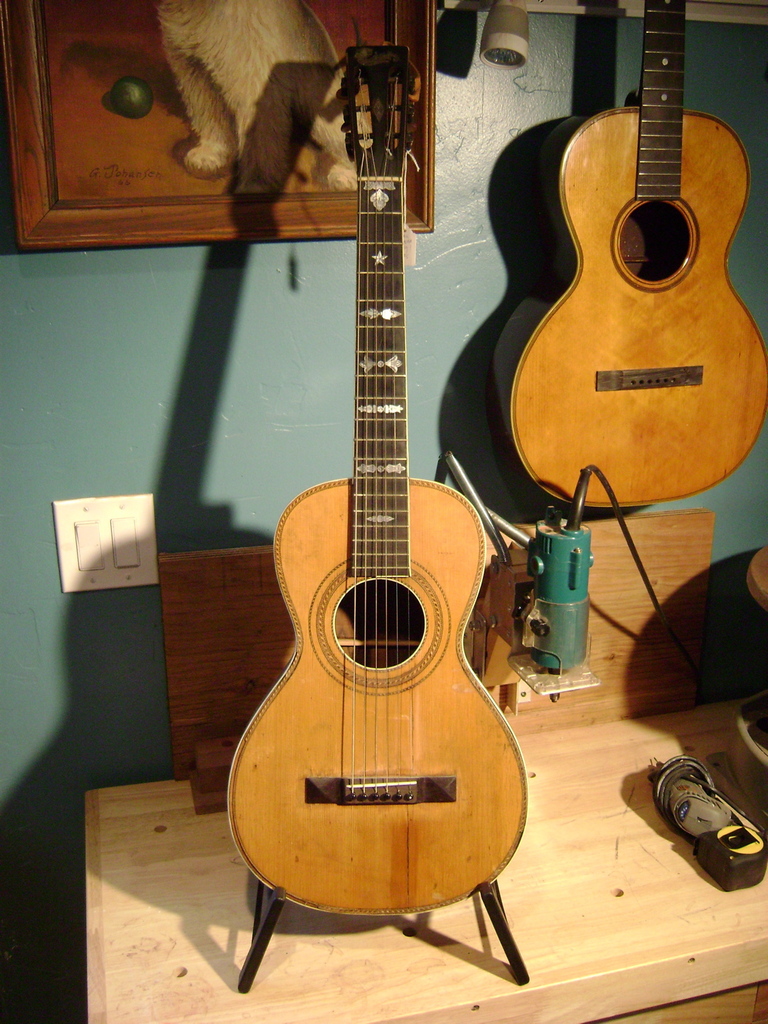 This is all really helpful Eric & Frank, thanks. We've reinforced the top/headblock area & are nearly ready to glue it up.

When we received the guitar, the neck angle was way off - aimed at the very bottom of the bridge - not just the middle. The angle needs to change quite a bit; so here is is the tapered neck shim we made - from .030" to .090". It fits nicely in the pocket, but the Martin neck-setter in me is just not comfortable that there's no tapered dovetail to hold the neck still and in-place. It feels so wobbly when I hold it together. 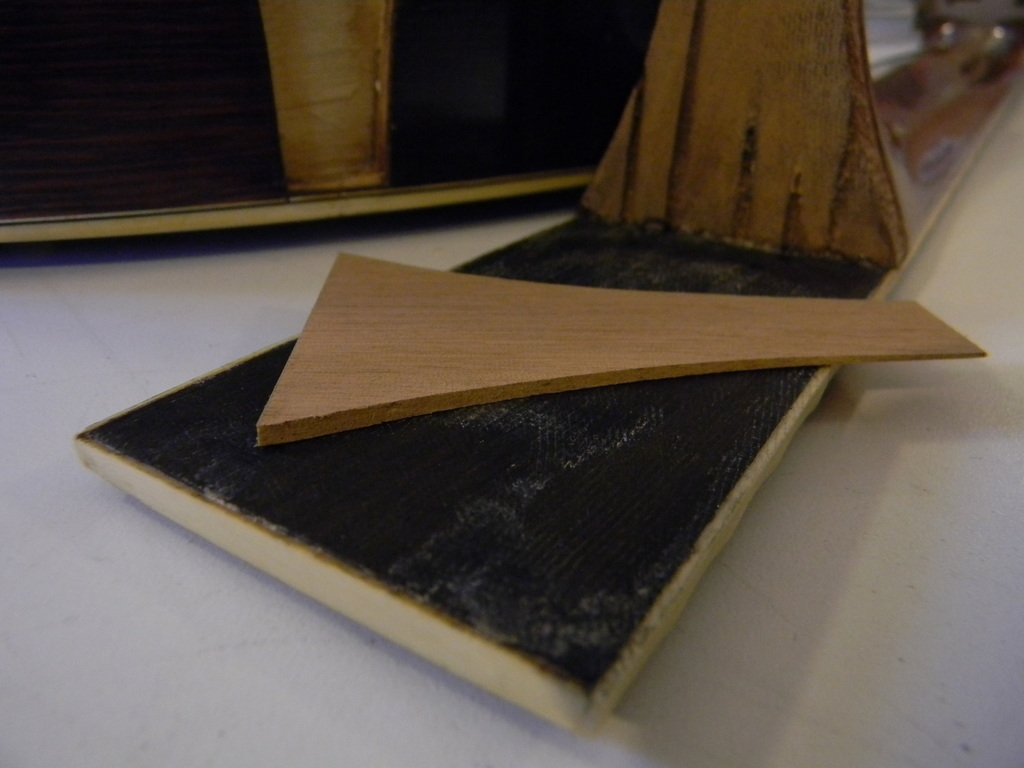 Then there's the matter of the newly exposed finish line along the outer seam... 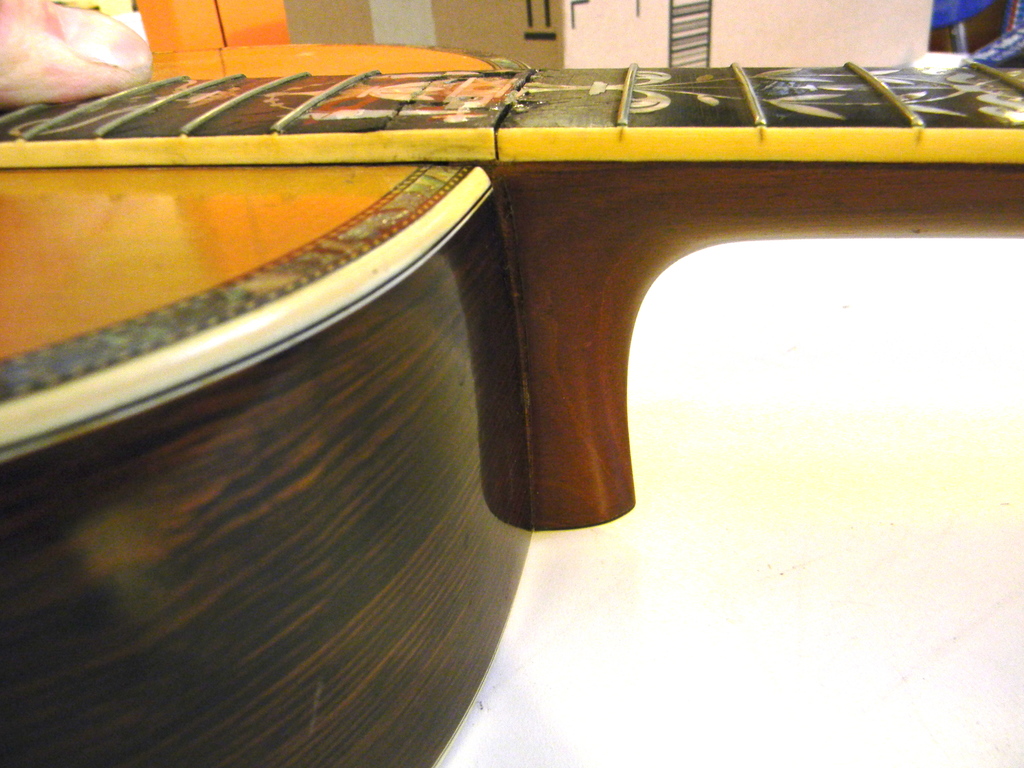 Would I be better to use a thinner shim - only at the top, and remove a little more material from the bottom of the tenon - pulling the heel further in?

Permalink Reply by Greg Mirken on March 8, 2012 at 12:38pm
Steve, have you considered the intonation ramification of lengthening the scale .090"?

Isn't this shim going to leave a VERY large fret slot at the joint?

I haven't tried to reset a neck joint like this so I'm confused as to why you are not re-cutting the heel instead of inserting a wedge.

Your shim dimensions are needing to be based on scale length so if adding .090" at the top of the heal sets your bridge saddle the correct distance from the nut then thats the correct size. I've found most of these resets need a significant amount of scale length correction so .090 does not sound extreme to me but the tape won't lie. Once you've set the scale mark the face of the body on the heal so you can touch up the unfinished exposed wood before resetting. Also in your photo it seems the fretboard extension has just a touch of space between it and the top at the body join, that's good because you may have room to lower the neck into the mortise just a touch and that will tighten things up just a bit. Nice progress so far.