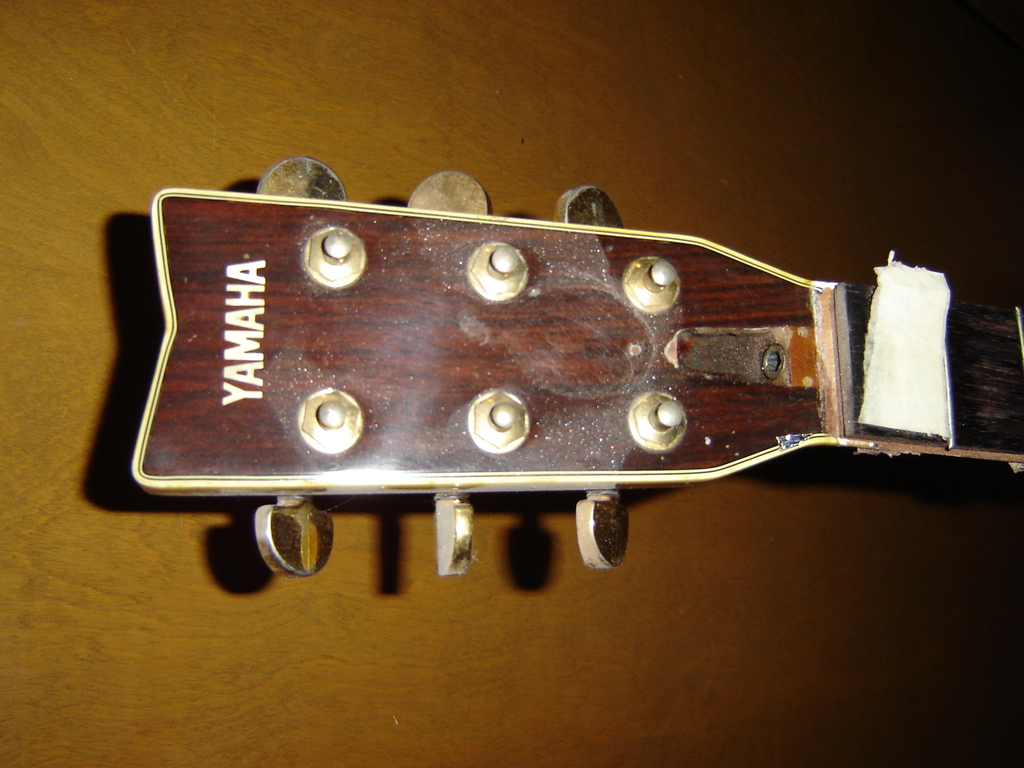 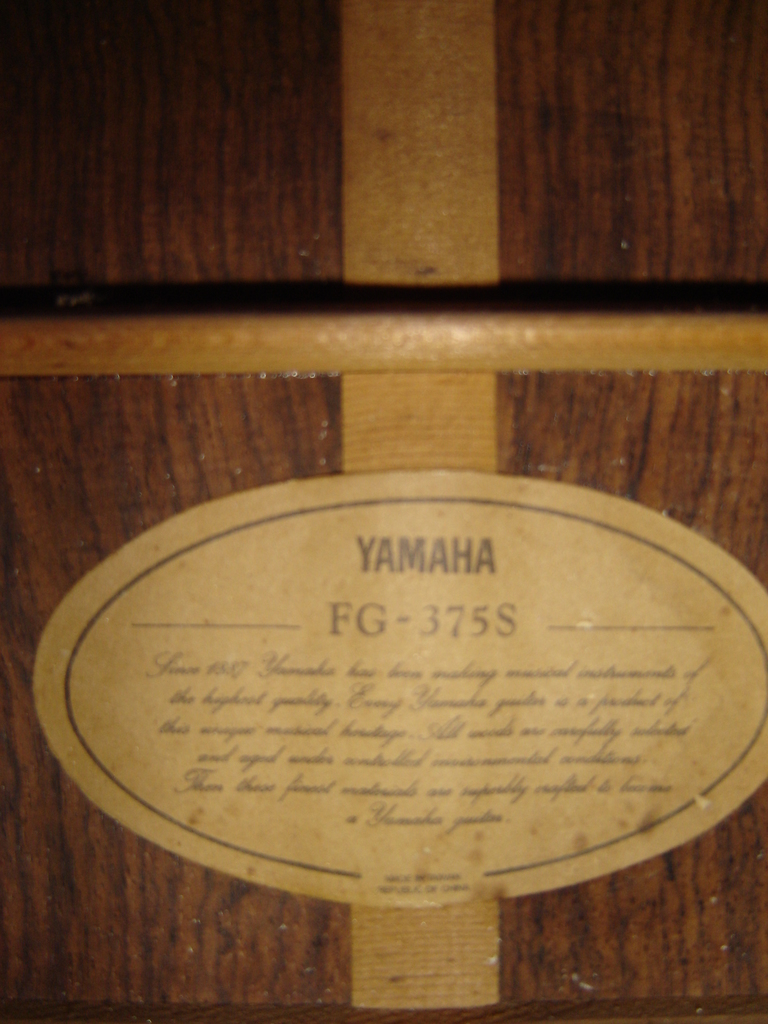 Also, I'm a hobbyist, not a professional repair person.

I just acquired a 1977-80 Yamaha FG-375S, Taiwan,  with a broken truss rod.  The allen key nut looks like its been over tightened, and has the tip of the rod maxed out of threads.  Probably bottomed out in the nut.

Has any one ever replaced a rod in this era Yamaha?  Any clue if it's a single rod only, or a rod in a inverted U channel?

I'm not going to have time to pull the FB until after Christmas to see what's under there, too much family stuff to do.  Hoping someone with previous experience might be able to provide some hands on insight.

A previous owner was going to try to repair it, roughly removed the FB binding and balked at that point.  So it hung in his basement around all his woodworking project gathering dust and overspray from finishing processes.

Now it's found its way to me.  Nice solid top body with only one clean crack in it.  Worth it to me to invest my time to try a repair, so why not try myself.

Are you certain the rod is broken (like does it spin), or is the adjuster just bottomed out? Before you start dismantling the guitar, get the adjusting nut off and get a new one. It might just need some washers.

Thanks for the response.  I must have edited out that line last night as I hurried up to post.

The nut and rod turn in unison.  Left or right.  No movement forward or backwards of the nut after 5 turns either direction.

I put a pencil mark on the rod end for reference to be sure they moved together.

Permalink Reply by David Burchfield on December 12, 2016 at 6:38am
I have the same guitar with the same issue. I wouldn't be so inclined to do anything with mine, but it is perfect I all other ways, and everything that I have read about them is that they are excellent quality.

Here is where I am after a couple of years dealing with a couple different luthiers, one of which has a very good national reputation.

I called Yamaha customer service to ask what the thread pitch on the truss rod is, and, in conversation with the agent, learned that the truss rod is certainly metric. The last luthier had been attempting to use the StewMac repair system and couldn't get the threading dye to cut in to the rod. After learning what I did from the agent, I have come to the conclusion that my only real option now is to remove the fretboard and replace the truss rod.

I am dismayed that the original fretboard is bound and has the really pretty inlay in it, and will probably be damaged in the process.

I will be watching this thread with great interest.

Would it be possible for you to post a picture of the FB binding on the low E side so I can see what type of position dots they used.

All the pictures I've found are from the high E side of the FB.

Unfortunately, I have run away from the cold and snow and will not be anywhere near that guitar until after the first week of April.At that time, I will retrieve it from the luthier and can take some photos, if that will be of any help.

I was hoping that someone with some experience with that particular guitar might offer some insight.

I am home from vacation and picked the guitar up from the repair shop. Here are a couple of photos of the binding along the side. Do these help?

As an aside, I met a gentleman on vacation who is a builder/luthier who offered to take the fingerboard off and install a new truss rod for a price I can't refuse. We will hope this provides some good results.

Good to hear from you Dave.

I'm in neutral on my guitar.  Busy cleaning out and getting ready to sell my dads house.

I have a modern 2 way rod I'm going to drop in my guitar.  This will be my first attempt at this conversion from a single action to a dual action rod, so I've gathered up a few old cadaver necks and need to build a  jig to hold everything properly.  Practice a few times first.

I have my original single action rod I had repaired.  If you want it we can work that out.  Then you don't have to remove the fingerboard, just pull the neck ,  the rod slides in from the heel end.  Get a re-set done on the neck and you're in business for another 20-30 years.  Just what you need, more options to ponder.

Ed has the fingerboard off, and found that it had been off previously, and get this, reattached with epoxy! He said it was a real struggle to get it off but all ended up successfully and none of the binding was damaged.

A new truss rod is on the way, and after the mess from the epoxy is rectified, it will all go back together and hopefully become playable. I spoke with him about your truss rod, and he said he would rather use one that he used in the custom guitars that he builds. I do thank you for your generous offer of the repaired one you have.

I don't consider my skills yet at the level to attempt this task, and now learning what I have, I am happy I didn't attempt it. Now, if it were a Trumpet, I would have been in to it and finished to playing condition at this point.

I do have a couple of photos of the binding that I took for you, but the website won't let me upload them. I can tell you that there are dots on the binding that correspond to those on the fingerboard.

I will keep you up to date on progress.

Time for an update.

The finger board is off, and obviously for the second time.  I see remnants of two glues under it.  Hide glue and what looks like tight bond.

First look tells me it is a single rod and it is not broken, but the mounting flat plate welded to the rod at the heel end has rounded out its routed pocket and can spin in place now.  I'm guessing some one maxed out the threads in the nut and continued to apply pressure until the wood failed around the plate.

The rod channel is covered with an oak strip.  I don't believe there is a metal u-channel under there.  Looks a lot like the rod I see in an old Japanese made Epiphone bolt-on acoustic I have.

Remnants of glue and wood chips shook out the dovetail pocket.  I'm guessing again that some one removed the FB, tried to stabilize the rod plate in place with wood wedges and glue inside the dovetail pocket.  This failed again under pressure when trying to loosen the nut, it just re-cut the plate pocket round.

I'm going to have to ask a few new questions here.

I can steam out the neck, grab hold of the plate and try to loosen the nut.  Then devise a way to re-stabilize the plate into the heel.  Any insight on re-stabilizing this plate?

Anyone ever replace a single rod style with a U-channel model set up?  I think I can route out the channel in the neck if this is a viable option.  Pro's, con"s?

Hope to hear someone with some hands on experience with this issue.

Permalink Reply by David Burchfield on December 28, 2016 at 5:27am
Good morning John,

That is all good information. If you would be so kind, when you have the rod out, could you measure the diameter and thread pitch of the truss rod? The person at Yamaha USA said he was pretty certain it was metric but had no way of knowing for certain. This could answer the question, and allow me to have a machine shop fab a die to rethread the broken rod. 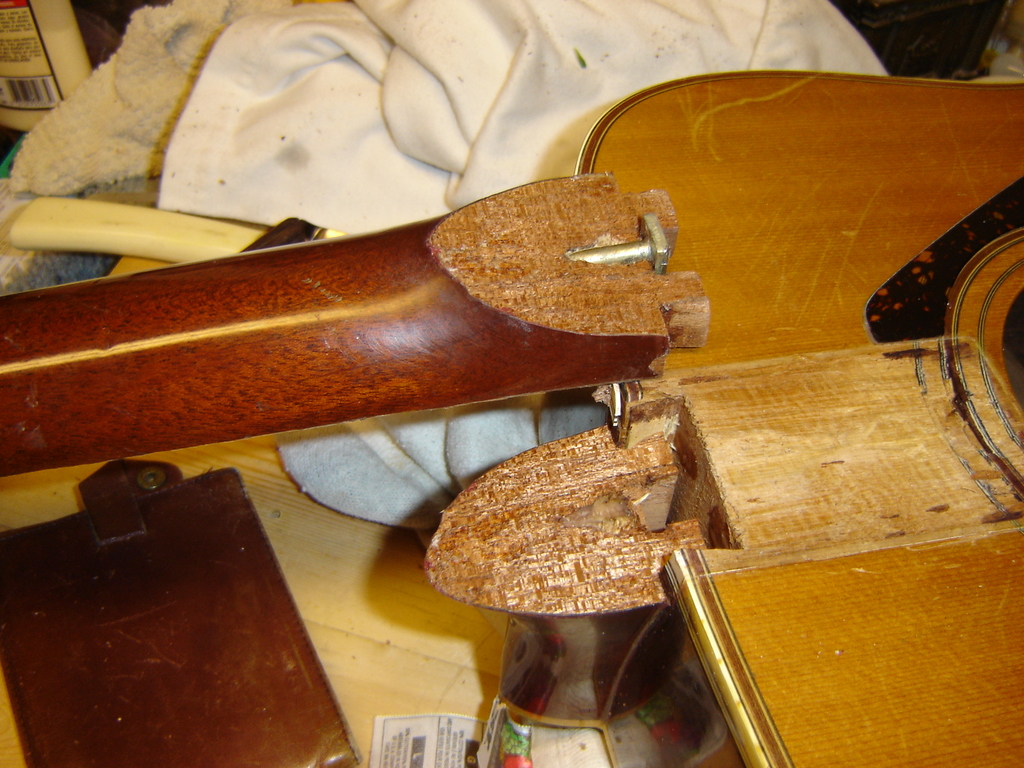 I went ahead and tried to pull the neck.  But it separated too easily on a previous repair, leaving 3/4 of the heel still mounted in the dovetail.  This old repair was not aligned exactly and the added space was filled with glue.  It required a lot of cleaning out of old glue.  But I believe I'll get a clean break now I can align much better when I get to that point.

What I have now is a break that exposes the last 3/4 inch of the rod on the neck side.

Also I can see that the stop plate at the end of the rod has either compressed or worn away the neck wood to enlarge and deepen the pocket.  This allowed the rod to move forward in the neck and aided in the eventual bottoming out the threads.

Never worked with this situation before.  I've got to be able to stabilize that stop plate from rotating and hold its position.

Since the rod is out I could drill two small holes in it and put pins or small screws through it and into the vertical surface of the back of the neck.  And completely saturate the area with thin CA glue to firm up the wood.  Do you think that would be strong enough to hold the plate stationary?

Maybe pull out the remaining heel piece, drill 4 holes in the stop plate and stabilize from 4 points instead of 2.

I'm going to have to use some dowels to reinforce  the neck/heel repair too.

I could have a friend who welds add a vertical piece of steel that could descend into the notch in the heel, using the notch as a new pocket guides.

Would I be better off adding a U-channel truss rod assembly into the neck?

I've never made a new neck before, so I don't think that's an option I want to tackle now.

Any insight would be greatly appreciated.

Dave, I've measured the rod and it is 5mm, thread pitch is .8mm,  course thread.  Pitch was determined by measuring the travel of the nut over 10 revolutions.  From what I can find on the web, a fine pitch would be .5mm

I will go out and confirm the pitch tomorrow by matching it up at a specialty shop.