I have a late 60's - early 70's model A558 Aria classical that needs a neck re-set.  This model has a dovetail joint I've been told.  I've re-set a similar, same era and label, model A556 that has an identical body other than the solid cedar top, and it has a dovetail.

These 2 pictures I took before I loosened the fingerboard extension. I used a 24 inch ruler.  The ruler dove down to just touch the top.  The bridge is not the original, and has been shaved and the saddle lowered to allow lower action.  The strings needed to have ball ends added to keep the break angle manageable.

But when the extension was heated and loosened to the 12th fret, the angle changed. It decreased. These 2 pictures are after the extension was loosened.  I clamped the extension down to take away the slight rise it had when loose.

The neck angle has decreased.

Looking inside I don't see any loose braces.  The top hasn't flexed that I can see.

Has anyone come across this before?  Any ideas? 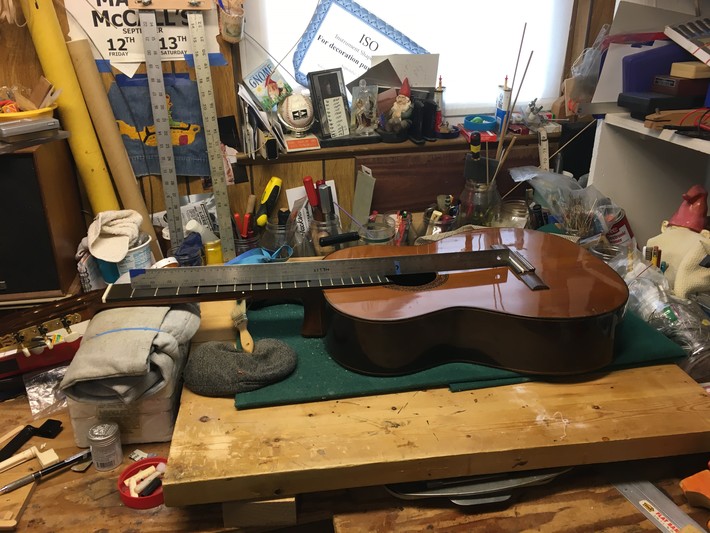 Before the FB extension was loosened.

When the fb extension is released is the straightedge still contacting all of the frets in the area around the 9th to 12th fret?  It is hard to make it out in the photo.  I am wondering if the extension, once released, is acting as a ski-jump and lifting the ruler off the fingerboard.

On second thoughts I realize that if you have clamped the fb extension down to be flush with the top again my ski-jump suggestion is invalid.  Therefore, there seems to have been a genuine change in the angle of the neck to the plane of the soundboard, and the adhesion of the fb extension to the top was holding it in the underset position.  That is very strange.

If the neck has moved with release of that attachment it would suggest a significant structural weakness in the neck block, or detachment of the heel from the dovetail tenon.  The only alternative is that the soundboard geometry changed when you unglued the fb - but I find it hard to imagine how the bridge could drop as a consequence.

I pulled the 13th fret and drilled forward into the dovetail pocket last night.  Set up to syringe in boiling water and  see if it would soften the glue and remove the neck.  But I looked again at the angle, and I think it decreased again about 1/64 to about  1/32.  So hard to line up a back ruler, and align my line of sight to properly read the measurement.

More background on the guitar.  When I acquired it back in 2012 the bridge was missing.  I did not have any background information from the previous owner.  A very clean bridge footprint. Looking closely at the tuner rollers last night, it may have been strung up a some point with steel strings.  Slight impressions coming out of the hole in the plastic rollers in strings 1-4.

The neck has a slight upward bow.  No truss rod or any internal support.  Sitting a ruler across the 1st to 12th fret I find a gap that increases up to a max of .009 over the 6th and 7th fret and then decreases to the 12th.  String action at the 12th before loosening the fingerboard extension was high at 1/4-3/8 if I remember correctly a few years ago before I removed the strings. I did not re-string it and measure it before starting this re-set.

My guess for today,

Now for an episode of GSI, Guitar Situation Investigation.  Today's show "Blame and Explain This Dilemma".

Could this guitar have been exposed to a hot car or room/attic a few times?  Enough to allow the neck/fingerboard/top glue to soften and move under string (maybe steel strings ) tension, cool and re-harden.  Then eventually the bridge glue failed and it came off.  Tension now removed, and the re-hardened glue holds the neck and fingerboard in this new position.

After loosening the fingerboard extension, could I have relieved some of that applied tension behind the 12th fret and the soundhole?  Allowing some flexing back into a relaxed condition and decreasing the neck angle?

But the bow in the neck most likely will need to be addressed at some point.

Hi John, did you work out a solution? What you outlined appears to be the case. However, in photo one, the light under the straightedge appears to ramp up at the front of the bridge, indicating a raised top.

In photo 2 the line of reflections also appears to indicate a radius in the top, behind the bridge. Some nylon/classical guitars have flat tops.

Were there any signs that the fingerboard had moved towards the soundhole? In a recent repair I did the neck sides and neck block had tilted towards the bridge by 2mm and changed the shape of the soundhole. The neck could not be reset, due to the building style, so it was a massive challenging repair. The action was at 8mm at the 12th.

I have photos but I don't think they would help, in this case.

I have been recently trying to fine tune my neck setting skills (I've done about 40 so far and the results can vary depending significantly based on a range of very minute issues).  I've come to believe that the fingerboard extension plays very important role to a proper neck angle.  On instruments where the fingerboard extension has come loose, the neck seems to move forward.  I conclude this is because the fingerboard acts as an anchor to help stabilize the neck.  I would agree with Taffy's suggestion that the fingerboard may have slipped forward if the guitar got hot, particularly if it had steel stings on it, but I also wonder about another possibility.

If the fingerboard shrank over time (as many do judging from the number of instruments that have frets extending out of the edge of the fingerboard), I wonder of it might actually be pulling the neck forward creating the issue you describe.  The fact that the neck angle changes when you release the fingerboard extension, particularly since it is not under tension, seems like a pretty clear indicator that it is somehow part of the problem.

Hi here is one photo of which we speak, maybe two..... Some major rebuilding needed to stabilise the neck block area. and get the action down from 10mm to 2.5mm Taff

Mark, Taffy and Chris thanks for your insights.

The neck is out now.  I did start with simply syringing in boiling water.  But only the bass side would release, so I went to steam. The cedar top / top of the neck block glue loosened.  I can't say if it was loose before I applied heat to the fingerboard extension or steam to the dovetail.  Didn't see anything in the pre pictures I took, but didn't attempt a feeler gauge test.  There are 2 cracks is the top, each about 3/16 in under the fingerboard, that go back from the dovetail pocket to the first of the two top braces between the neck block and the sound hole.  I didn't find any moisture getting into the box while using the syringe.  But as I used steam I could feel it accumulating. I believe that the 2 cracks somehow were a result of my working the stubborn treble side of the dovetail.  The neck and body have had time to completely dry now.   I've re-glued the top to the neck block. I repaired the wood binding that came a little loose at the ends at pocket. Made a spruce patch to run cross grain to fit under the 2 cracks to stabilize that area. That went in Saturday morning.  I want the neck block area stabilized before I start dialing in the re-set.

Mark, I believe there has not been any movement in the top after the extension was released.  The top was flat before, and remains flat now.  The neck block seems solidly attached.  I have taken a .002 feeler gauge and cannot get any entry along any seam around the neck block at the dovetail or inside.

Taffy,  Thanks for the pictures, but there was no evidence that the board end had moved closer to the sound hole.  No lip I could catch a fingernail or razor blade on to detect.  No top failure and slippage like your picture.

Chris, I don't feel any protruding fret ends.  I have witnessed a number of fret boards shrinking a little when I've removed them completely to replace truss rods.  So I'm aware of that possibility.

What I think is I needed to be a little more observant and inspect these things more before ever starting to disassemble,  It still wouldn't change what happened  when the fingerboard was released.  But I could answer these questions.  Bottom line is I'm guessing what happened.

But from this point forward it becomes two issues, a definite neck re-set, and to evaluate if I need to and how to address rise in the neck/fingerboard from possible slippage.  Maybe time for me to put in my first carbon fiber rod support.

Thanks guys, I'll update again down the road.

*Once again thinking I have all the answers, but not knowing all the questions. Neck re-set is dialed in, but not glued in.  Clamped into position.  I'm happy with the angle.

I have not addressed the slight up bow in the neck yet.  I'm thinking of mounting the neck, string it up and see how or if the bow inhibits the playing.

From that, IF needed, look at possibly heating the neck and clamping the neck straight.  Or removing the fingerboard and installing a carbon fiber bar.  That I have never attempted.  But I have replaced truss rods before. Taking that slight bow out would flatten down that rise between fret 1-7.  Raising the angle a bit more.

Any insights that you can share would be greatly appreciated as I wish to move forward Tuesday or Wednesday if I keep to my initial thoughts.

Sounds like a solid plan. Being a classical guitar, I'm not sure how much stress you'll be putting on the neck and how much the bow will be an issue.  It makes sense to check it out before you do anything else.

I'm just completing my 2nd carbon rod installation and so far, they are working out well.  My biggest issue was routing the slot, but now that I have that figured out, it goes fairly quickly.  So far the results have been good, I'll let you know about the 2nd one tomorrow after the neck set is done and it's strung up.

Being a classical, I'm not sure how much stress you'll be putting on the neck