The bridge has come off this poor old guitar yet again and has wound up on my bench.

The first 3 poto's are how it sits now, taken by me.

The next 2 photos I acquired from the customer and show the repair that was attempted most recently in progress. It held for about a week.

The luthier who put in this cross grain spruce patch said that the hole in the top from earlier fixes was at least 1/32" deep so I assume at this point the patch is about that thick.

One saving grace is that hide glue was used in the last repair but it seems the spruce (inevitably) split because it terminated right at the point of highest stress at the back of the bridge.

As I see it, there are two possible solutions at this point.

1. Remove the back and double scarf in a piece of spruce that extends well outside the footprint of the bridge. a la Frank Fords method here http://www.frets.com/FretsPages/Luthier/Technique/Guitar/Structural...

A slightly complicating factor is that the neck was moved south to fix flat intonation by removing material along the entire length of the heel. Leaving the very svelte heel seen in the picture or.

2. Remove the Junk in the "hole" down to sound fibers that cross the footprint intact and add a spruce patch on the inside larger than the bridge outline to carry the rotational load. A la Frank's method here.http://www.frets.com/FretsPages/Luthier/Technique/Guitar/Structural...

I welcome any input from the Fret's.net collective brain as to weighing the invasiveness/cost of a back removal vs. what I see as a second best and slightly distasteful option.

Perhaps a third method has been developed in the years since Frank Ford produced his incredibly valuable essays?

All this stuff is SO far over my head... I am so enjoying getting all this info. I LOVED the 'ramp' idea from Frank though. Man, that dude's ideas REALLY add essential ingredients to the food...

Is tacking on an update the right way to do this?

Brace yourself for ugliness.

Filed down the saddle to get good heat contact 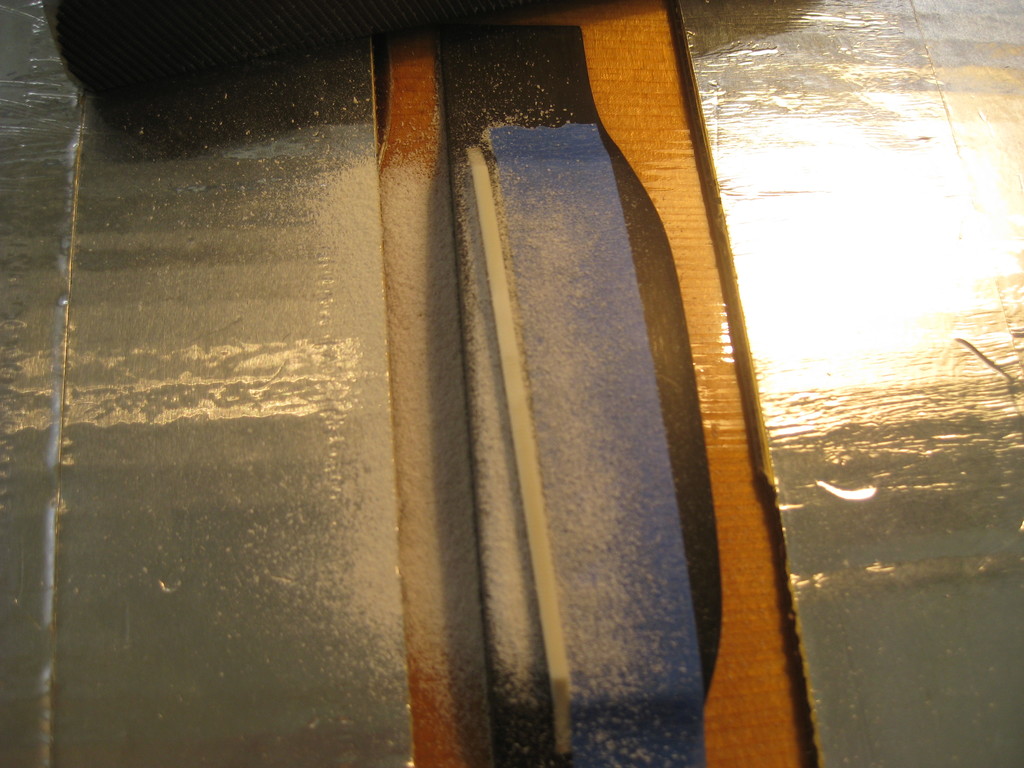 Turned on the blanket The glue line under the Patch separated easily in that gooey PVA way. But don’t see any. 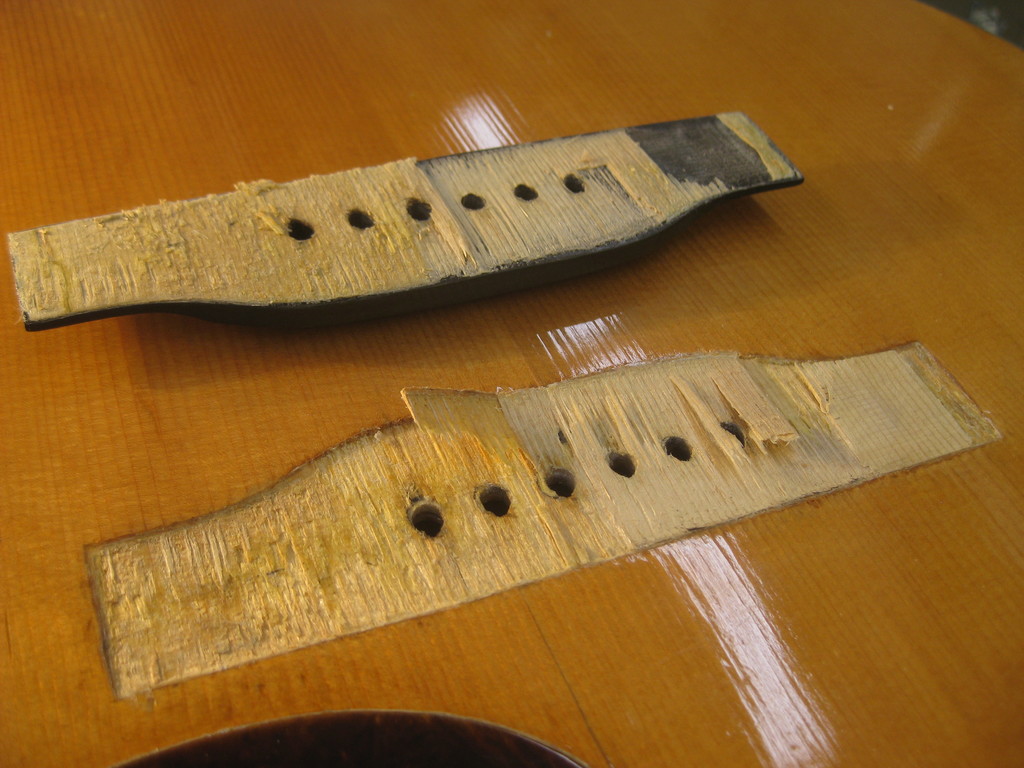 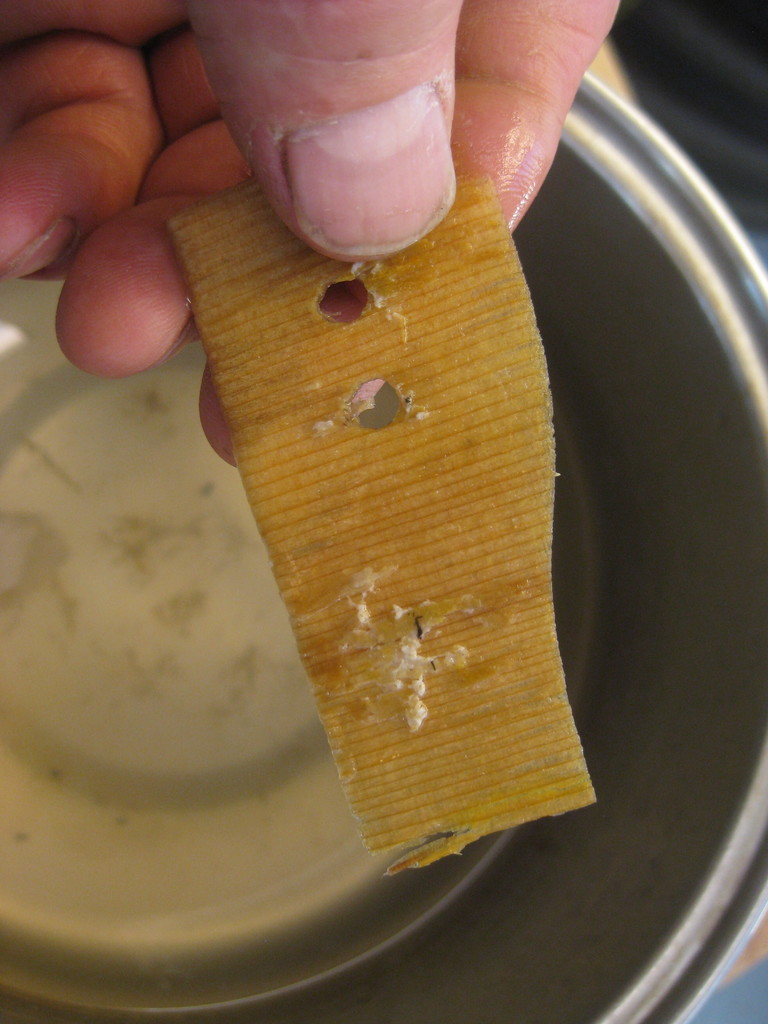 Small spot of PVA. Must be older than last repair that never got removed

Strange ultra-yellow stuff does not begin to dissolve in hot water. 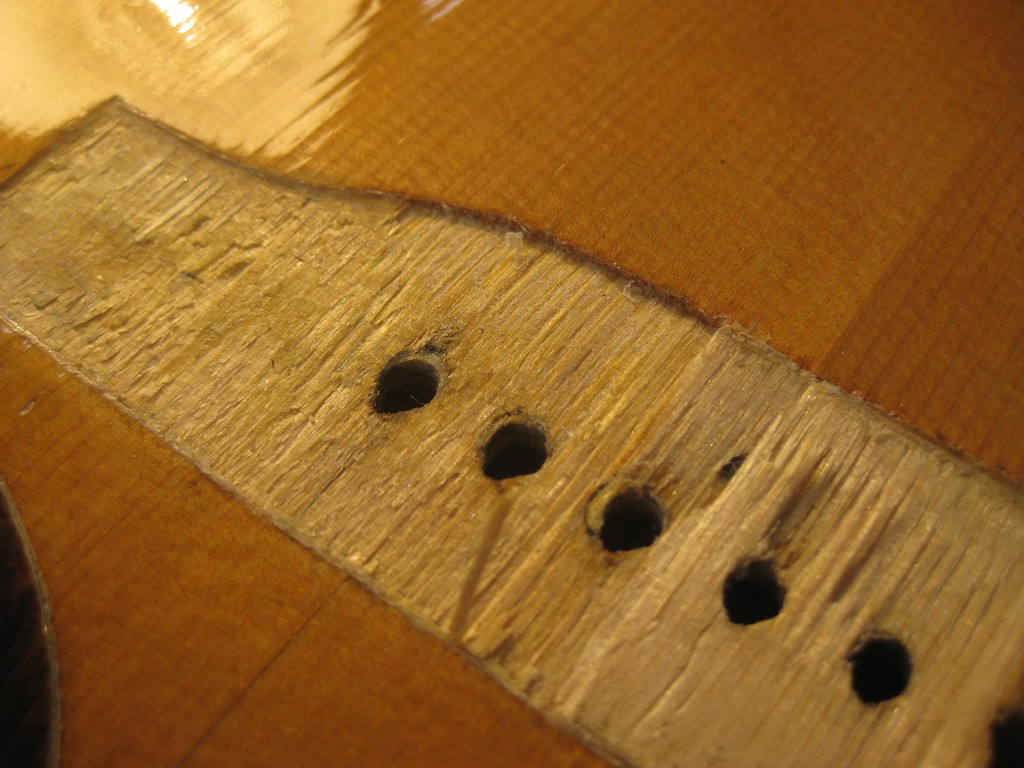 Small patch of Hide failed on bass side. Did his start other split/ failures?

Any Martin gurus recognize these as real 1945’ tooth marks? Look real to me but hard to imagine bridge came off many times yet bottom was never altered ( some good news?). 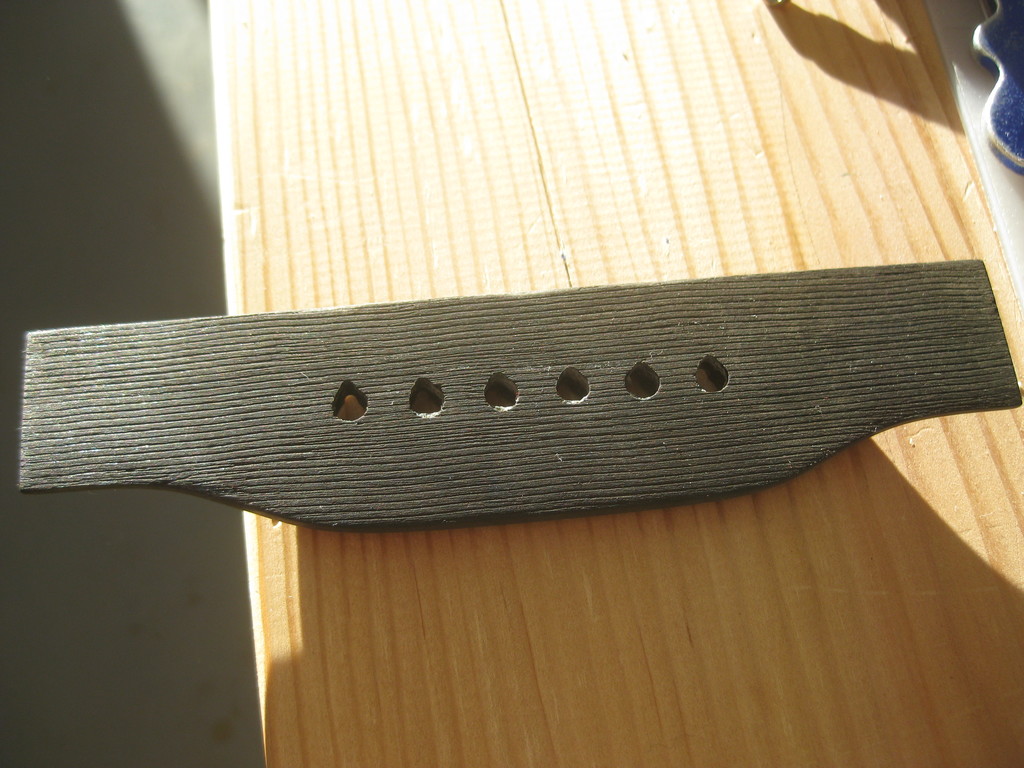 I haven't seen toothing like that before. The outline of the bridge looks odd to, are you sure its original ?

Yowza, degree of difficulty is through the roof. Do you go with the brittle glue that breaks or the flexible glue that creeps ? Im having a sympathetic vibration of sleep loss.

Observation, and probably a false one due to the photographic quality, but is that bridge actually flat on the bottom? It looks like it comes up on the wings.

Not sure if it's original.

posted some pix on the UMGF to get some input from the vintage hardcores.

flat as a pancake. 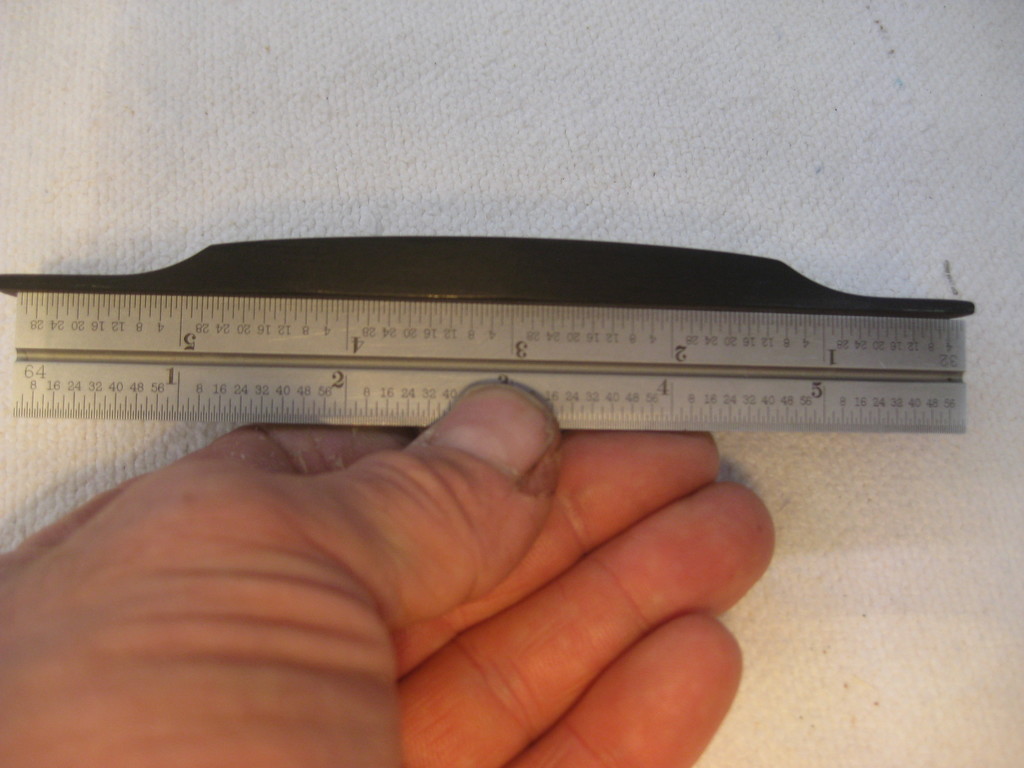 Wow - not just flat as a pancake, flat as a precision milled pancake!!

I hydrate the top side until it's the shape I like. 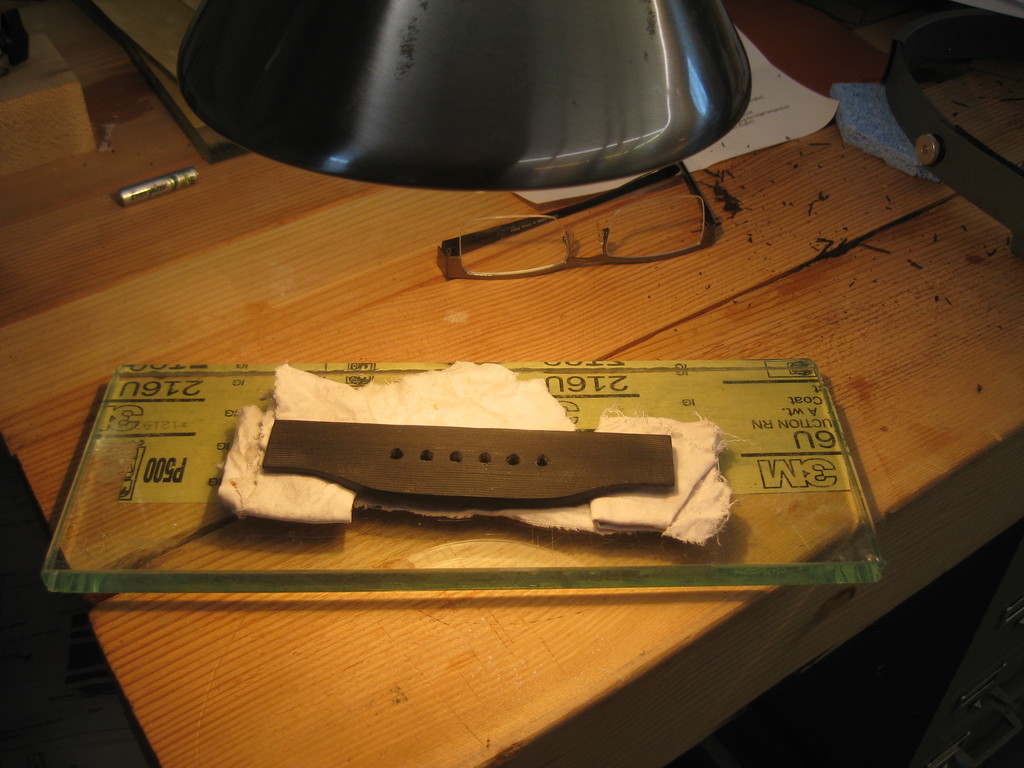