I was pretty unhappy to get a call from one of my favourite customers that the glue joint on his 90s Les Paul had opened up less that three months after completion.

I used a brand new bottle of white glue, which has always worked for these repairs with me before. The really painful part of all this is the now ruined paint touch up that I did that took several weeks to get  up to par is now totally ruined.

I had this guys axe for 9 weeks total, now here he is going to have to be waiting for it again.

I need some ideas on how to proceed folks. I just took the machines and strings off, and am patiently waiting for some Adult Supervision here.

Kerry, when you say "white glue" -what sort of white glue?   Brand/Type.   Technically, everything works right up to the point that it doesn't.  When that point is reached the problem needs to be fixed.   Which is a polite way of saying don't repeat the process until this one is given some airplay.

Case in point that I have banged on about before:  AV Syntec had a cross-linked Aliphatic that worked just fine - pretty much  a Titebond Original equivalent.  That is, until the day they decided to change the formula to allow a little more creep/flexibility for the chair-makers and cabinetmakers.   They also did not bother to tell the customers.    Nice one - I got to redo a bunch of repairs in a very similar manner - weeks later a bridge separated and then another - you get the drift.

I have used Titbond original ever since to do headstock repairs and, to the best of my knowledge in my region I have not had a single failure.   The dead animal glue guys will likely have a similar response - HHG works just fine as well albeit requiring a bit of experience and some equipment accompanied with a little less flexibility in the glue-up phase.

So how am I going to be cleaning the glue layer out of this crack for redoing it? And once it is out, what glue should I be using?

Is it vinegar that really cleans this stuff up ? I have not had to do this job before so....

Permalink Reply by Andrew on March 30, 2014 at 5:40pm
It would be good to know what glue it was (Im getting paranoid now). Also what was the nature of the repair? Broken headstock or...? Pics?

for what its worth I have used Smith All Wood Epoxy for headstock repairs for some time without problems.

some guys don't like epoxy but for a glue joint that I don't need to take back apart,  and don't want to come apart I use Smiths.  Have a few several years old still holding great.

pictures would be helpful as a lot depends on the break itself, mostly how big the glue surface is that your  working with. 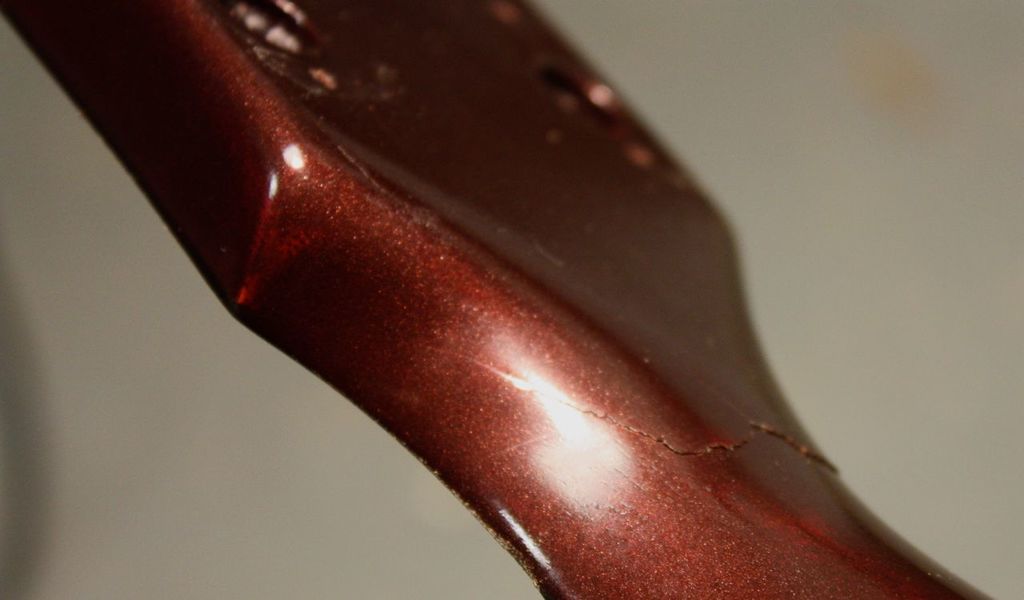 It was Weldbond white Andrew and Russell. Permalink Reply by Andrew on March 30, 2014 at 6:41pm
Ah, thankya. That is a very tight crack. When it broke originally, was it broken right off, or only part way? If it was all the way off you could disassemble the joint to clean the glue, perhaps?

The break looks like it may have been cause from impact. Would the joint fail on the seam or no? If it was, how would the conversation with the customer go? Very interesting conversation here. Knock it outta the park brother.

Cold flow, accelerated by heat, is always a possibility with the white and yellow glues, I think.  When it comes to regluing this kind of separation, I don't count on regular wood glue because of the virtual impossibility of cleaning out the old glue to allow for a good clamping without internal gaps.  Such gaps require a glue with good cohesive strength, which  is lacking in aliphatic, PVA, and hide glues.

I'd want to get something in there that both sticks like crazy and sets rigidly with good cohesive strength, and is also heat resistant.  For me, that's cyanoacrylate.  Too bad about the mess it tends to make of lacquer!  Lately, I've been working with regular paper-gluing rubber cement as a "resist" to coat surrounding areas that might get CA or epoxy squeeze-out.  The results have been particularly good with epoxy so far.

Epoxy can be a good choice in this area because it can penetrate much more deeply than most folks realize.  I use the West System, and in tests I've seen it go 1/2" into a tight crack.  Trick is to  clamp the break open, and start feeding the epoxy in, allowing it to flow slowly and wick downward with the help of gravity.  I use the slow hardener (206, I think) and allow about an hour to keep coming back and adding more to the top as it weeps in.  Then, I slam the joint closed, wipe the excess off with about a hundred paper towels so there's nothing on the surface.

After that exercise, I paint on a nice layer of rubber cement around the break, clamp the thing up and allow the squeeze-out to harden on the exterior.  When the clamps come off, I use a razor blade to chip the epoxy off without damaging the lacquered surface.  Wishful thinking, yes, but it does work - sort of.

Andrew and David, no it was not broken all the way. The headstock veneer was still there, and it was originally a fall that broke the headstock, but certainly was not a fall made the glue joint fail.

Frank, I will carefully think about how to implement what you said here.I am so glad that you responded. I am still wondering how I will be cleaning that glue out though?

Sorry if I wasn't clear - I don't try to clear the glue out.  My attempt is to build a matrix within the broken area, old glue residue and all.  The capillary action of the epoxy or CA should help fill all the voids and the glue will set in and around particles of the old glue.  Remember, when you first clamped the break, you squeezed out virtually all the glue mass, so there shouldn't be much in there to impede the introduction of new glue.

That's a standard break with plenty of surface area - technically it shouldn't be a problem, anyway, what Frank said.

BTW, I'm just being lazy:   - clamp it open a bit and pour in whatever you think (I use a range of hypodermics to get right into the back of the break)  - last year it was all HHG....then epoxy, now CA.....they all work if done according to the break type and adherence (sorry) to the glue schedule.   Me, I'm just Titebond Original and a bit of CA to wick into the cracks.   But in the case of the pre-existing repair I guess West Systems or CA gets the popular vote.

Frank, there are no West Systems dealers in Prince George, I can order from here in the province, but I need to know exactly what kit to order. Can you help?