I have a great 1956 ES-175 that needs a serious restoration job. It has a crack in the heel of the neck. I was told it needs a neck reset, and many luthiers turned down the job. It's an awesome guitar. It needs a new fretboard too, the original one is shaved down so much, some of the dots in the binding are half way gone already.

I am more of a player that collector, so I need somebody to point me to a luthier that wants to do the job. I am in the bay area now, but I'll be living in LA soon... I though this is the right forum for that! Thanks guys, looking forward to your reply. 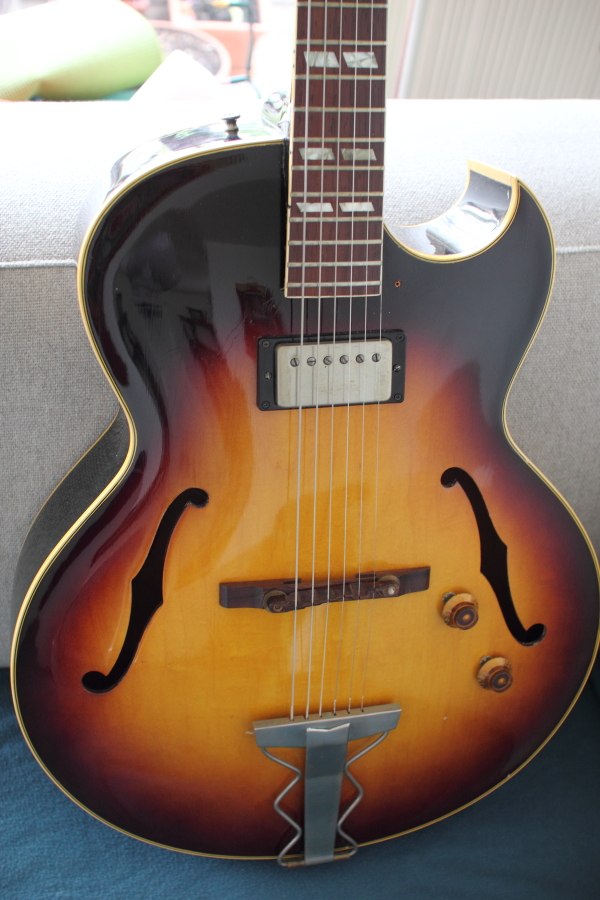 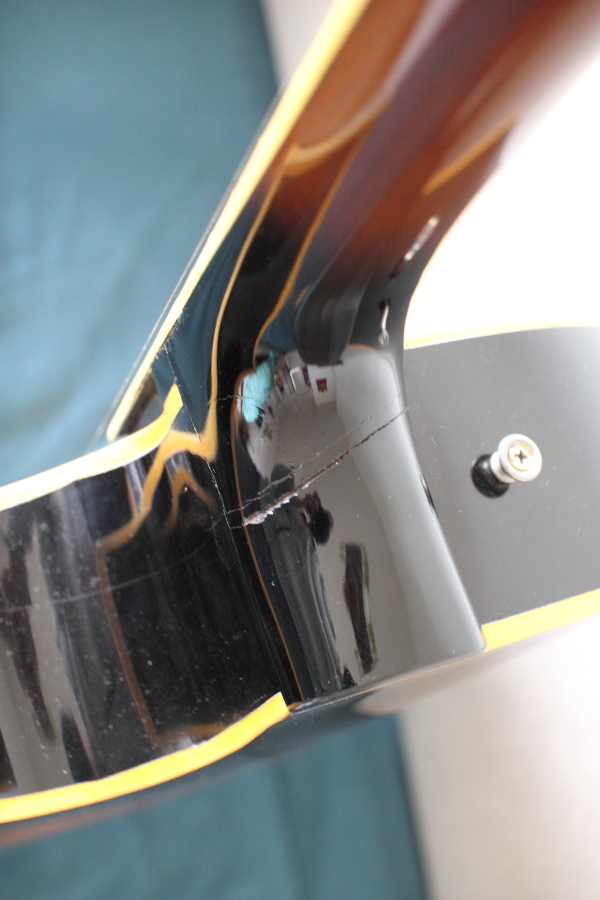 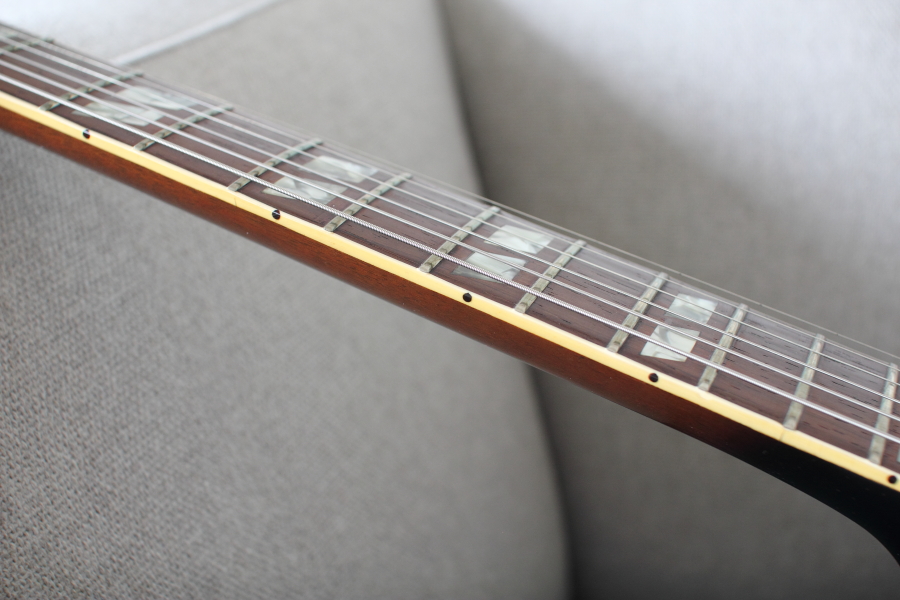 Micha, (sorry for the previous misspelling)

I maintain that this is either a 1957 model or later.  IF it is a '57 thru '61 or '62, there's a probability the pup is a PAF.  If it's a later mod/aftermarket upgrade, there's little likelihood of it being a PAF. There's only one way to tell: Could you post a picture of the back of the pup? You may be sitting on a "small fortune". (:

The mystique surrounding PAF's is that of legend.  We have to remember that there were some astoundingly good sounding PAF's discovered, as well as some that were just dog's and everything in between. I've had personal experiences with both categories and the variances are real. But you can't deny that they're collectible & valuable, no matter their 'strength'.

And here's a bit of trivia: 'back in the day' (' 60's & ' 70's) ....when Gibson guitars were returned to the factory for extensive repairs or refinishing, they'd strip the guitar of most or all of its hardware & electronics and replace it with current issue "new" parts & electronics.

I've worked on several early '60's LP/SG's and a couple of 335's that were sent to the factory for the well-documented classic neck pocket (SG's) and headstock (335's) cracks.  They all had late 60's pups and the pots date coded similarly.  The solder joints were 100% factory original (those folks were soldering artists!!)  , including the plastic Switchcraft output jack, and the harness looked identical to my '67 SG's.  Many of the original PAF's ended up in the used parts bin at the factory because of this policy.

Also, a PAF is THE most counterfeited pup in the world.  There are several trustworthy sites on the web that discuss how to spot a fake. I know that's not germane to the discussion but I thought it may add to our collective knowledge base.

And again Micah, that is one great looking instrument. It's also one of the rarer 175's as the single pickup model is not often seen...especially in this spectacular condition. I hope you get it up & playing real soon (-: I bet there's some great music yearning to get out of that axe.

Have a safe & happy New Year(:

I will post a picture of the back of the pickup!

I called Gryphon already, the didn't want to do it! Money was not the issue... maybe I cought them on a bad day, I hear about Frank a lot and only good things I would love him to look at the guitar!

Thanks for your messages, I appreciate that you share your knowledge !!!

Absolutely, I would be glad to look it over and make some recommendations  But, no I can't take it on anytime in the foreseeable future.

I reckon it will be a right smart while before I can consider adding this kind of thing to my work load.  I had some serious health issues in 2011 and 2012, in addition to already being literally years behind on some big projects.

Thanks for posting Frank!

I hope your health is getting better. I heard from luthiers from all over the US about you.

I have contacts to a luther in LA now that will give me an estimate. I am already in the middle of moving so I'm gonna check in with him when I'm down there.

Thanks again for your reply and best wishes for you and your work in 2013!

Paul, the serial number on the guitar is A 25466. Do you know how to confirm the year?

Also, I am setting up a guitar blog - if you are interested in writing a vintage guitar column let me know! That would be awesome... www.theaxeblog.com (design will be updated soon, this is just the beginning...)

Alright! Thanks Jeff! I was told '56, now I know better. I am looking very much forward to get this baby all fixed up!

As well, you should be!

Will probably be sweet with the PAF. If it sounds half as good as it looks.....you have a winner!

here a picture of the pickup - unfortunately not the original. I think I remember the last owner telling me it's a seymour duncan antiquity... 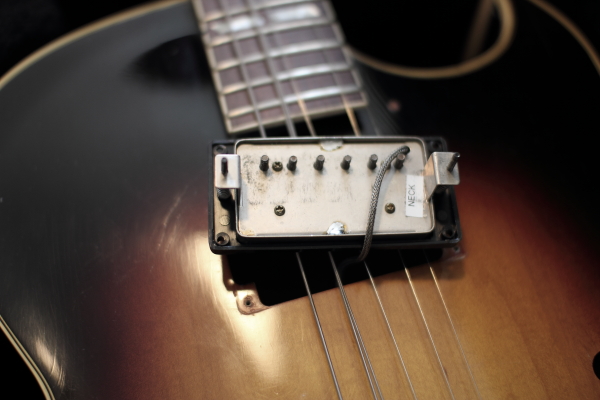 Willing to bet that most of us couldn,t tell the difference in tone between them anyway! Unfortunate for 'orignality....' but that is what happens when the aftermarket "cult-collector" value so greatly exceeds the intrinsic value of the item......You'll have that...!

Thought I might update this post as Micha brought the old 175 in the other day for evaluation and decided to leave it with me for repair. The neck is off and the horrors of previous repair were immediately evident. The pictures tell the story but my absolute favorite is the dowel through the bottom of the heal that almost makes connection to the other side of the break. Second favorite goes to the gobs of white glue. We've decided on a new neck heal and proper repair of the headblock so this sweet guitar will sing again soon. So the first shot shows the fretboard extension removed, an easy job due to having been cut through at the 13th fret and re-glued with said white glue. 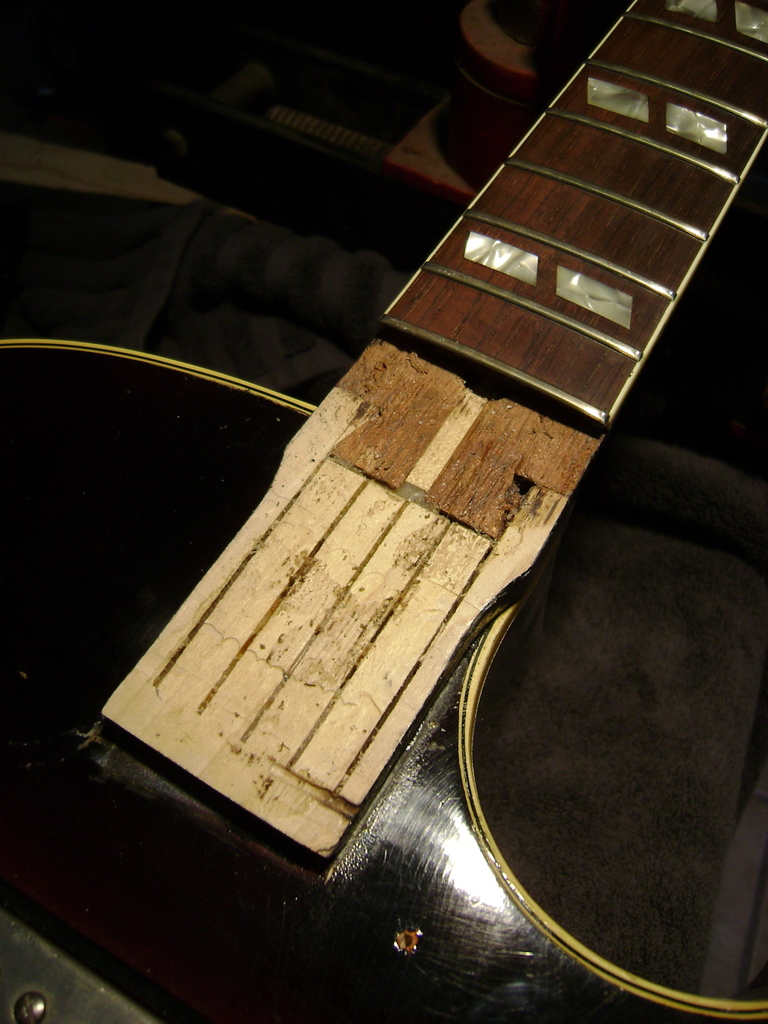 Then off came the extension support. Steam was applied and, presto, the poorly repaired joint peeled apart. 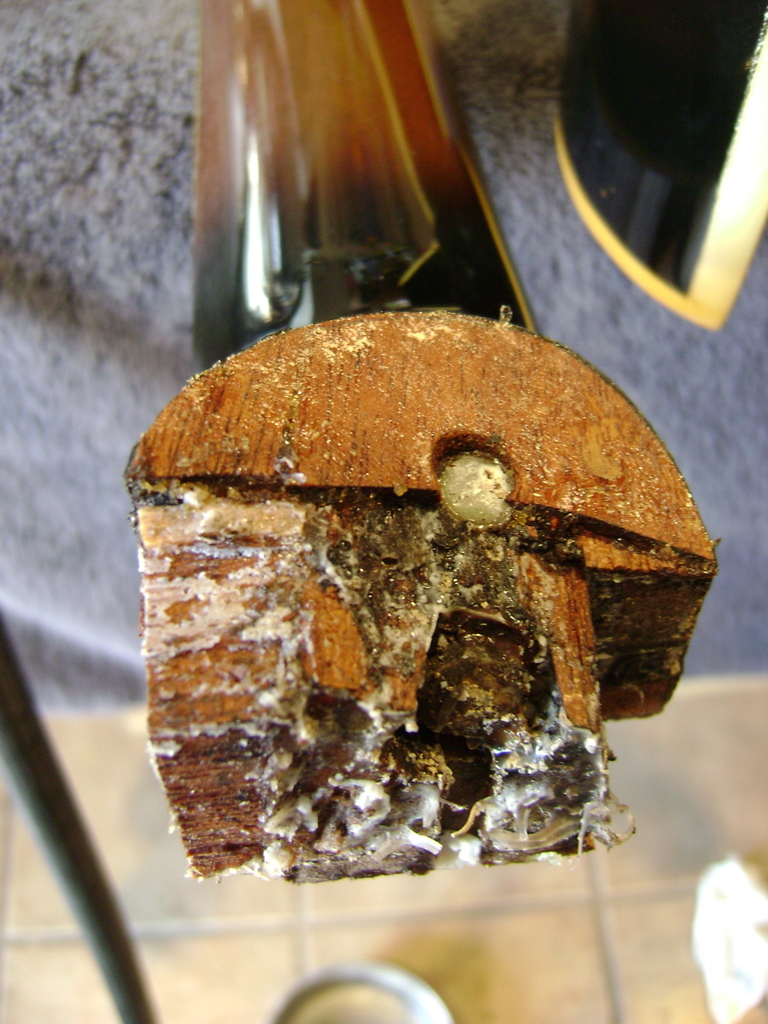 And here's that incredibly strong dowel. 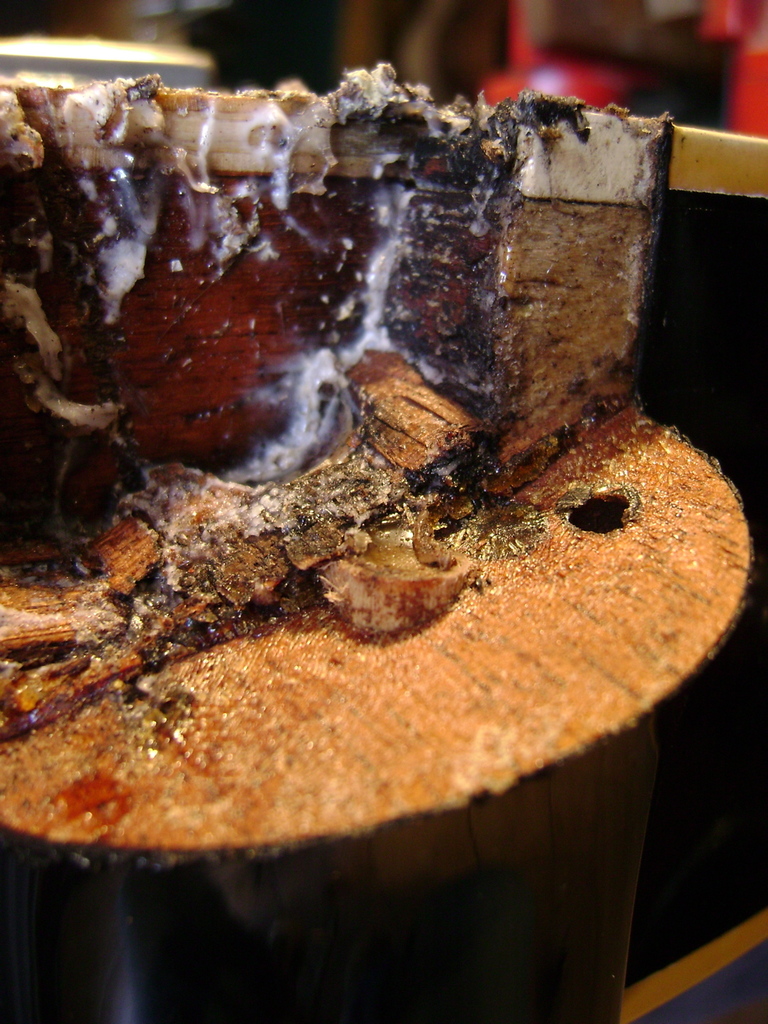 Just wondering... How did all the melted marshmallow get in there?