I've just seen a friend's classical guitar whose strings are wound in the OPPOSITE way. Usually, strings are installed in such a way they wind from the post's hole to the centerline, but this dude makes his inner four strings to go outwards. According to him, this makes for a more stable tuning since the string cannot slip towards the center the way it does when installed in the usual way. I took a (crappy) photo with my cellphone. What do you think? Your friend is talking out of his ass

Permalink Reply by FRANK on May 25, 2011 at 12:06am
completely backwards now on the other hand who is to say he is wrong or right ? I don't think there is a wrong or right with this one just A compromise of his personal taste ,as a luthier I would go and reverse it and say something to him that this could be a new possibility for him ,so 1 thing I need to ask are the strings touching each other ?after the nut

Permalink Reply by Pierre-Antoine Roiron on May 25, 2011 at 3:37am
It's a misunderstanding of tuning stability's process. To get tuning stability, a very good slipping of the strings in the nut should be achieved. Maybe it works, but there are better chances that it works the other way.

If such a problem exists as Pierre states then this could be corrected by directing(new nut) the slots to the designated string and to be honest I've always liked string art.I used to coil up the excess so as not to disturb

the inner core(soul)of the string.Also his technique would negate the possibility of having no downward angle at the exit behind the nut.Whudduya think?Just thinking out my anus.........

He told me this is a 'church guitar', used by him and other people so yes, it's has been pounded a lot. He also told me he had tuning problems due to slippage of the strings when wound the usual way, so he came out with this arrangement to correct that, pointing out how the break angle of the outermost strings are always sharper than the inner ones, so this way they all have that angle.

To be fair, the strings don't touch each other or the surrounding wood on the headstock. Personally, I prefer to have the strings as straight as possible. After all, the reason headstock slots are not parallel is to allow strings to get to the posts at a straight angle, as shown in this picture: 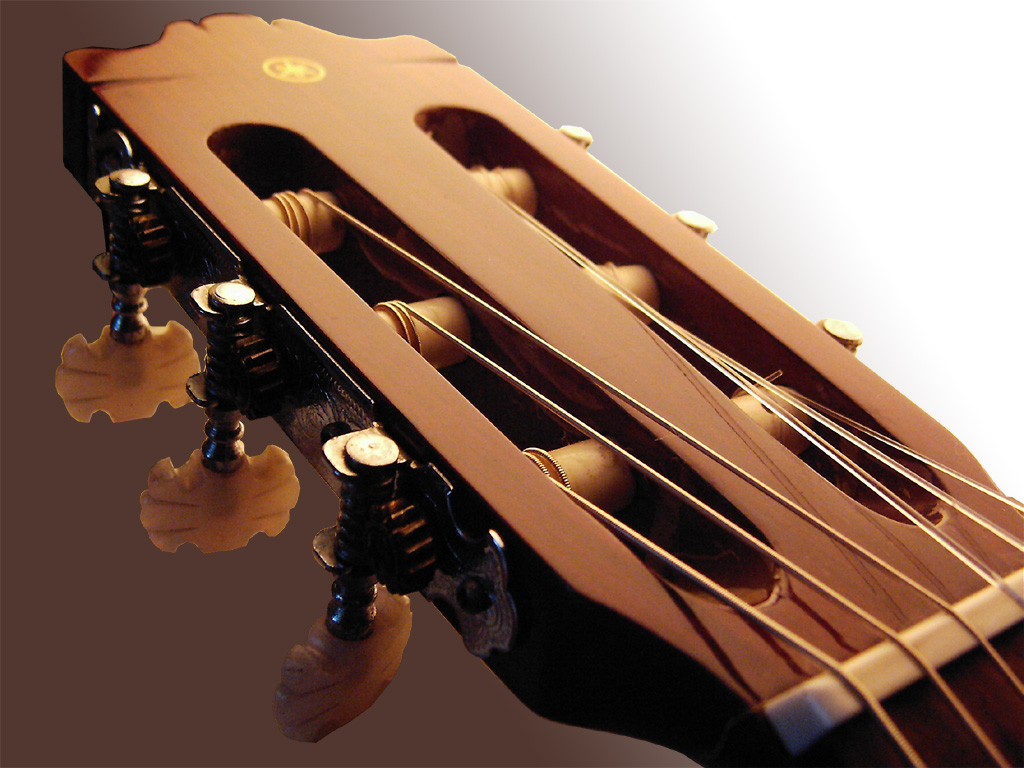 Since I believe in trying to educate of my customers, I politely told him to tie a knot around the string post when installing it, to keep the string under tension when winding it, to have enough winding length to keep the string angle as small as possible, and last but not least, to let the guitar to get used to the local enviroment during at least 15 minutes before attempting tuning and playing. This always has worked for me.

I believe you and have done this 30 yrs ago but got tired of explaining the concept. I may revert now.I have an exact

duplicate of that headstock in my workhole.Some kid bashed his guitar and the headstock was about all that was in one piece except for the fretboard which I used on a mandola.

Permalink Reply by gary choppick on May 29, 2011 at 9:16am
i guess...without failure there would be no progress. all electrics would look the same and all of you luthiers would make the same classical or accoustic models. consequently there would be a glut on the market of same old same old and no need for this web site. enjoy your freedom of choice. we appreciate your knowledge and workmanship and NEW ideas. keep them comin.

It's a beater Yamaha - if it stays in tune, he can do what he wants!

I fix a few guitars for the local Jr. High students, and it's usually cases of cheap nylon string guitars with steel strings stuck on - they can't understand why the top is pulling off. Unfortunately, the guitar teacher (who is a great guy and an excellent boat builder) wants to fix everything with outdoor epoxy.

If I had to take this case seriously, I would consider pulling the tuners off, and sanding the white cylinders with 150 grit paper or steel wool to create a less-slick surface. I would also teach him how to tie strings on correctly to prevent slippage, and how to stretch them correctly to stay in tune, which I imagine is also an issue. But as long as someone is playing, I ain't gonna criticize too harshly.