Hi, I acquired a Martin guitar which was made by am employee. It's probably made quite recently. The only problem is that it wasn't finished.
There is a hole for the truss rod [Thru the brace and into the neck], but alas the truss rod itself is mia. It's a beautifully made guitar but needs to be finished. also, what's the best under saddle piezo system to electrify my baby?
Can anyone illuminate me as to whether a new truss rod would be easy to install?
Thanks for all replies.

I have a guitar that I inherited from my grandmother about 10 years ago. She told me a long time ago that the guitar was left to her by a boyfriend she had back in her 20's. She was supposed to hold onto it for him and he would return to get it back from her. He gotten it handed down to him from his father. From her story and her age at passing and her approximate age of obtaining the guitar, I date it to be from the 1940's or later. My grandmother had spilled white paint inside it along time… Continue 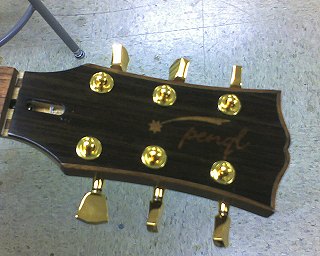 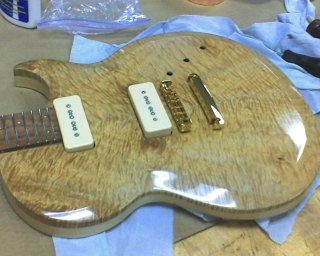 I am on a quest to put a pickup in my mandolin (F5). I've looked at several but am currently leaning toward the K & K internal. The pickups themselves look relatively easy to install, but the endpin hole will need drilling out to accomodate the jack. The question is whether it's necessary to remove the tailpiece (traditional Gibson-style) in order to drill it or whether I can get away with drilling with the TP installed. Varnish finish, Unicorn and Mustang… Continue