This is why I started "working on"guitars.
The picture shows my old “Morris” classical, that I once mistook for a chair (I sat on it...). 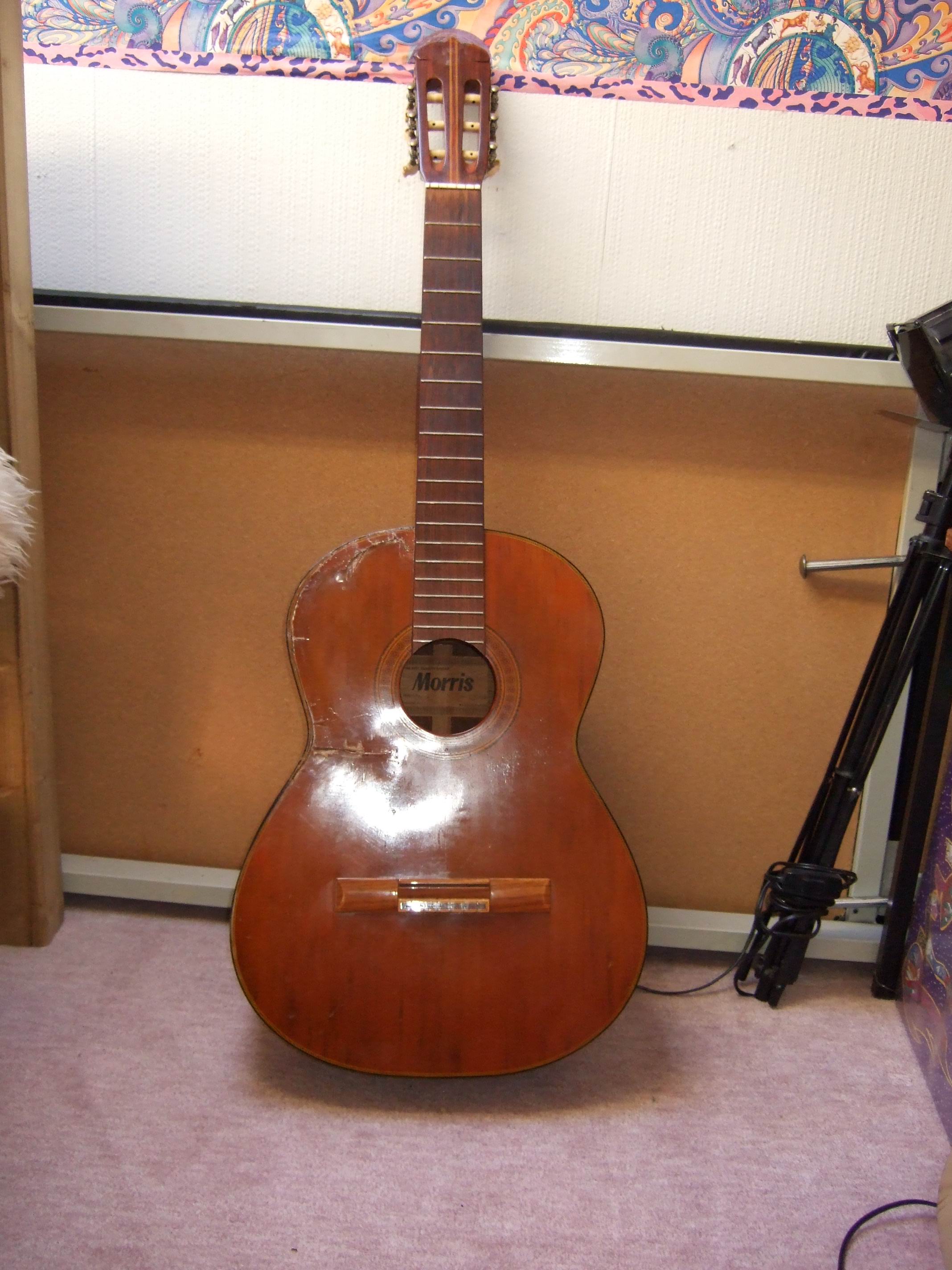 You can see the cracks in the top (most on bass-side), but there's more damage to it...

I was told that repairing this damage was a waste of time and money so I tried to keep this instrument as playable as I could. I just used a sports-tape (the kind that is also used by athlets) to cover all cracks and to close the gap between top and side. To prevent the top from goïng inwards, I made a few posts that I placed on the sides, resting on the back and thus supporting the top. To my surprise it still sounded good.

Some years later my wife wanted to give me a new guitar and so I picked up a clasical (a “Guitarrass Quiles” E-3 made in Spain).

Again time went by but the injured “Morris” was something I couldn't forget.

After having build some cabinets, and after having concluded that cabinet-building isn't something you want to do in your home (kitchen) the thougt of repairing old Morris came up. 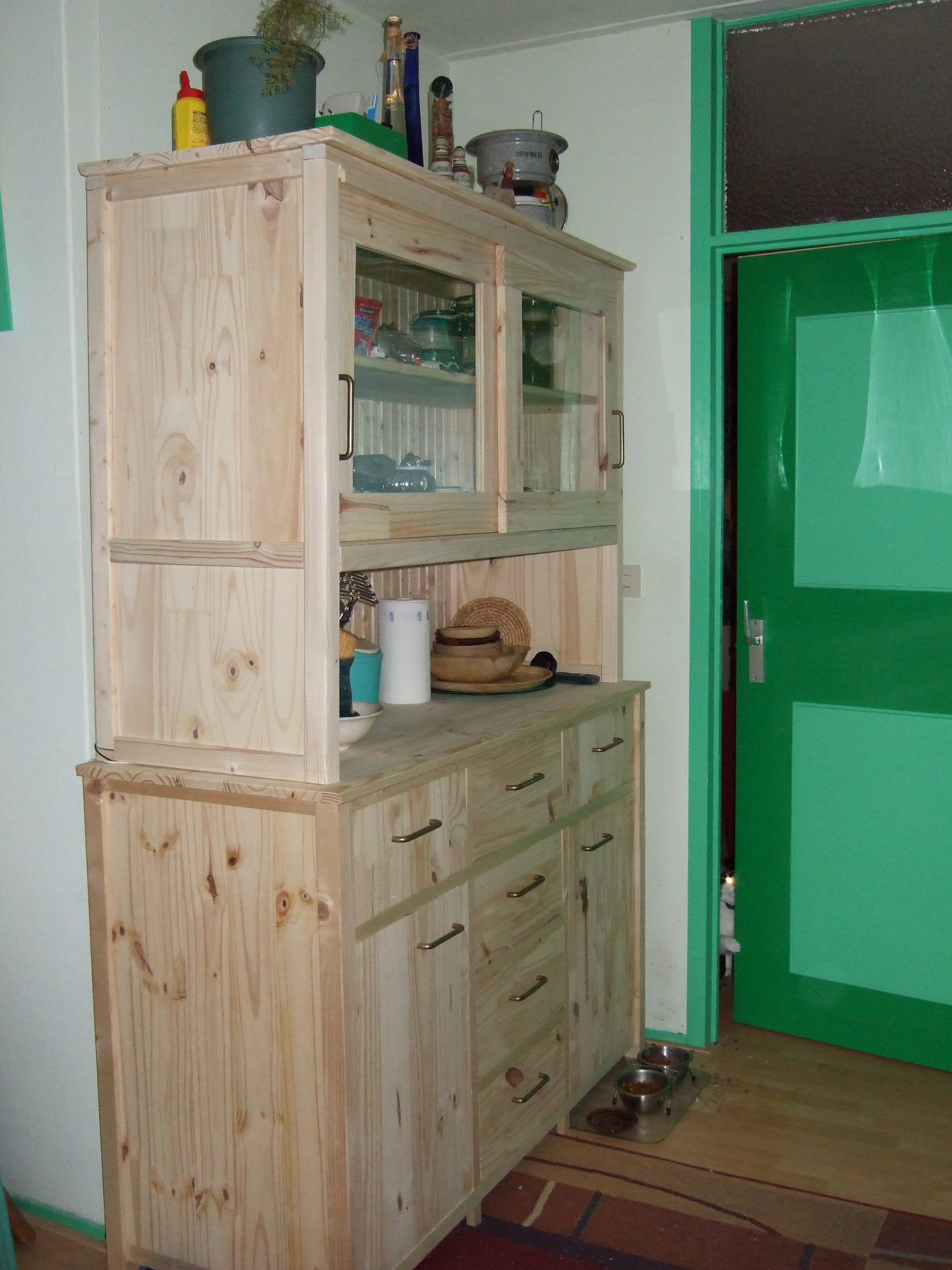 I started looking on the internet for any info on guitars, repair and building. There's a lot of information and “minformation” arround, but finding Frets.com (and later also frets.net) was realy one of the best things that could have happened to me that time.

Now, back to the Morris. The factory has an US e-mail adres so I contacted them for aditional information on my guitar. I attached some foto's but Morris couldn't tell me anyting on this instrument, saying that all Morris guitars have a type-number starting with a letter...
The label just says “Mod 205” and stamped on to the upper soundhole brace is “125F3” in red ink. Now I had to find out if it would be possible for me to repair this instrument. I realy love the neck... The damage is on the bass-side. (The white stuff is the remainder of the sports-tape, proof enough not to use it...) This was the best cleanup I could do. This is part of the damage...

Aproaching this as a “restauration project” I thought it would be best to patch the damaged parts of the top an try to reglue top to side and to reglue loose braces.

But: patching this would mean I would have to patch the whole bass-side of this top, from fingerboard to waist. Next pic shows why: I was sure that this repair/ restauration isn't something I can do: I simply just don't have the skills (yet). (And: what would a heavily patched top sound like?)

Next thought: what if I would try to copy this Morris? Should I want to copy it, then I would have to take it appart... That was something I thought “even I” could do, following Frank Fords examples and copying some of his tools. If I would make an even bigger mess of things I would at least have tried. So: get the back off. (On the pic you can see that I had no indea how the purfling/ lining were attached) 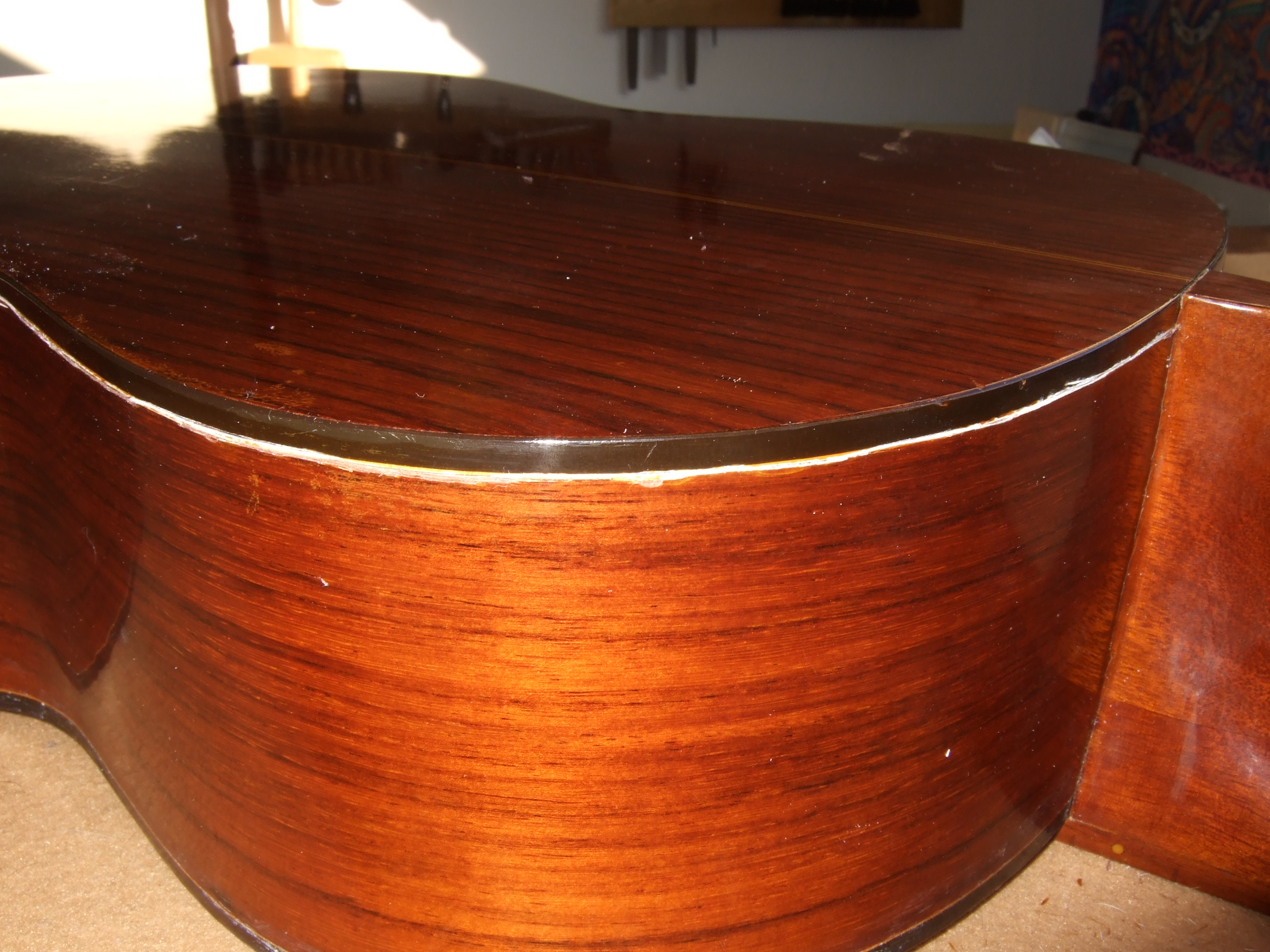 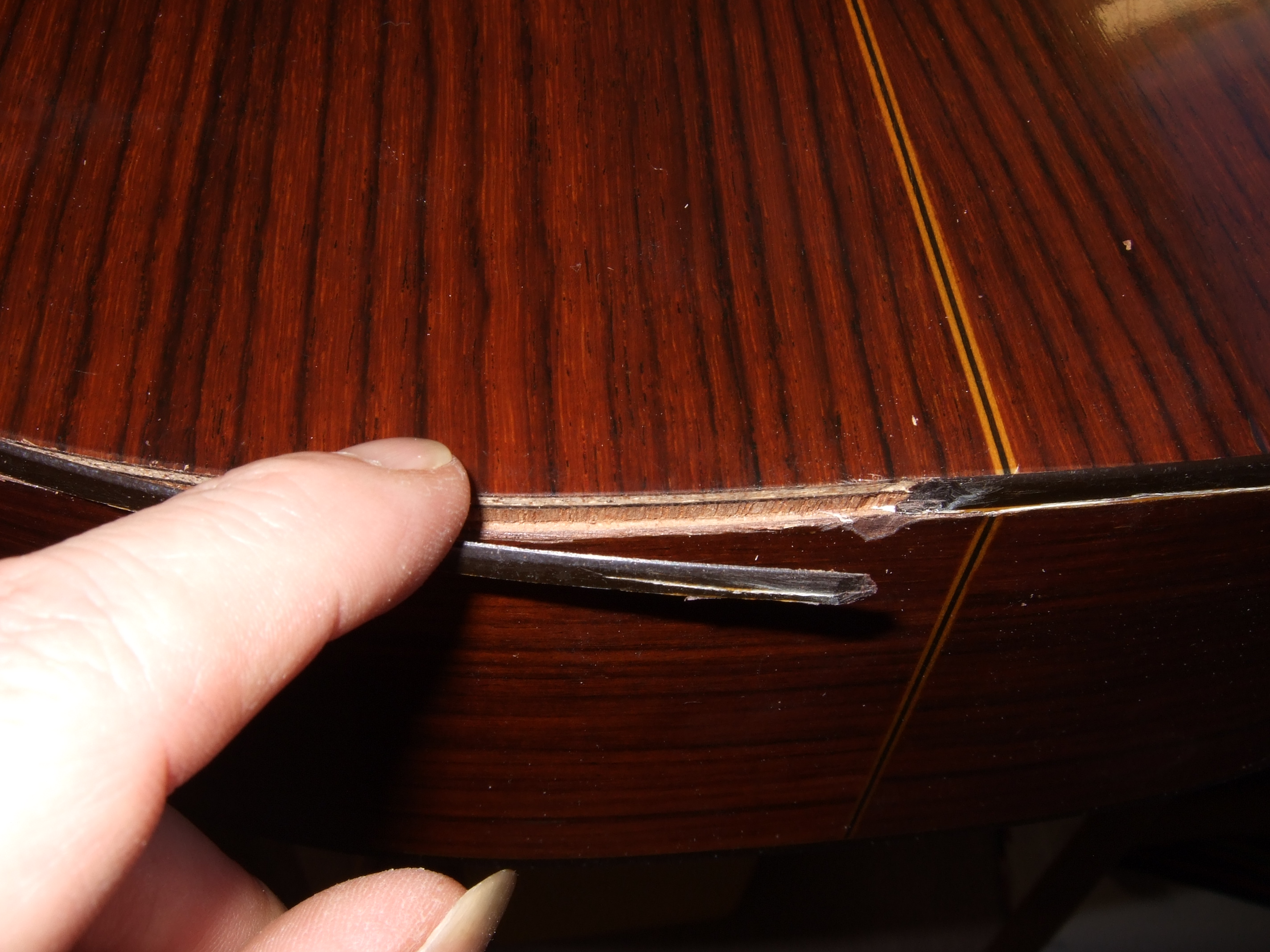 And now for getting the back off... 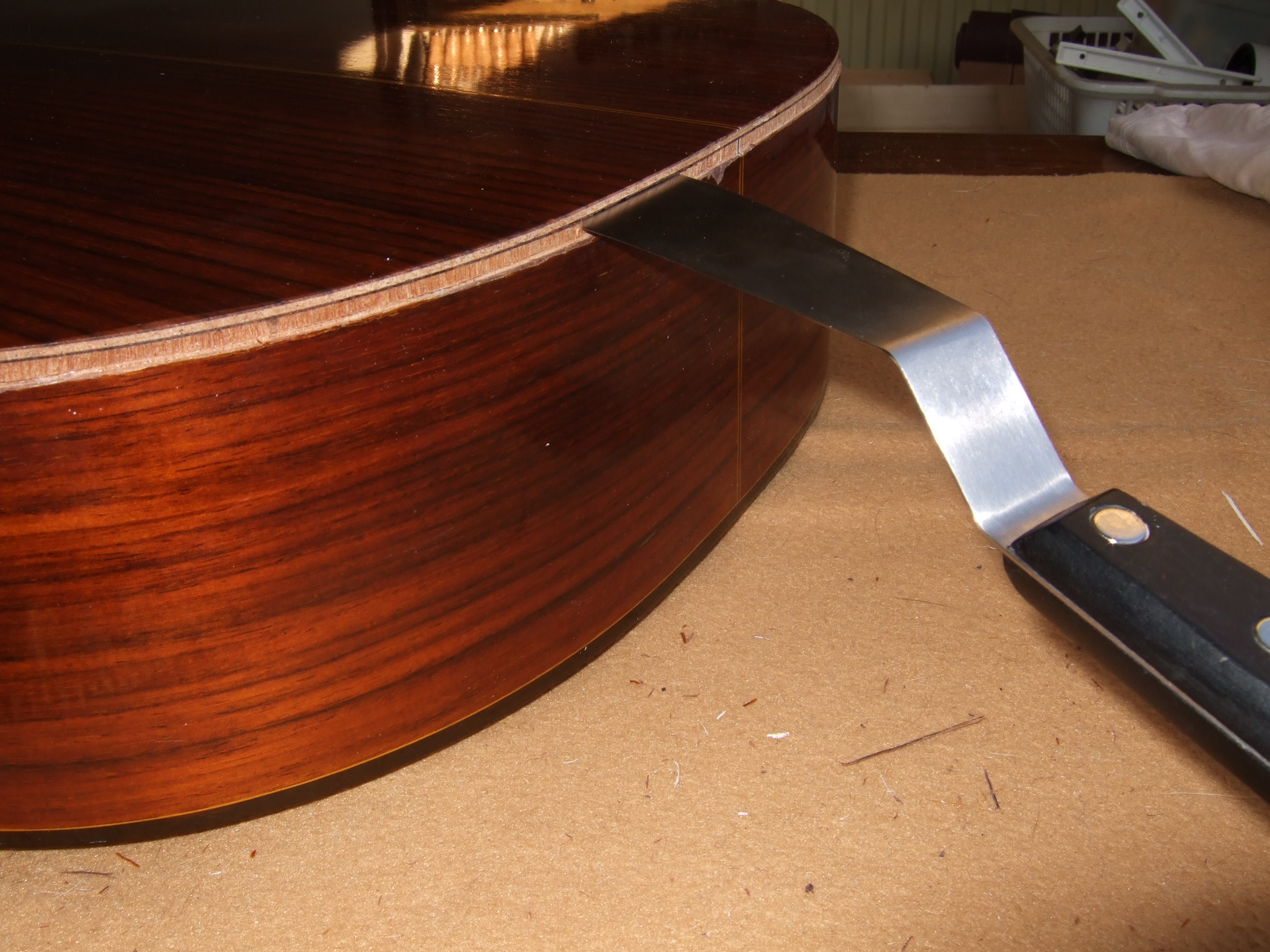 And off it came: 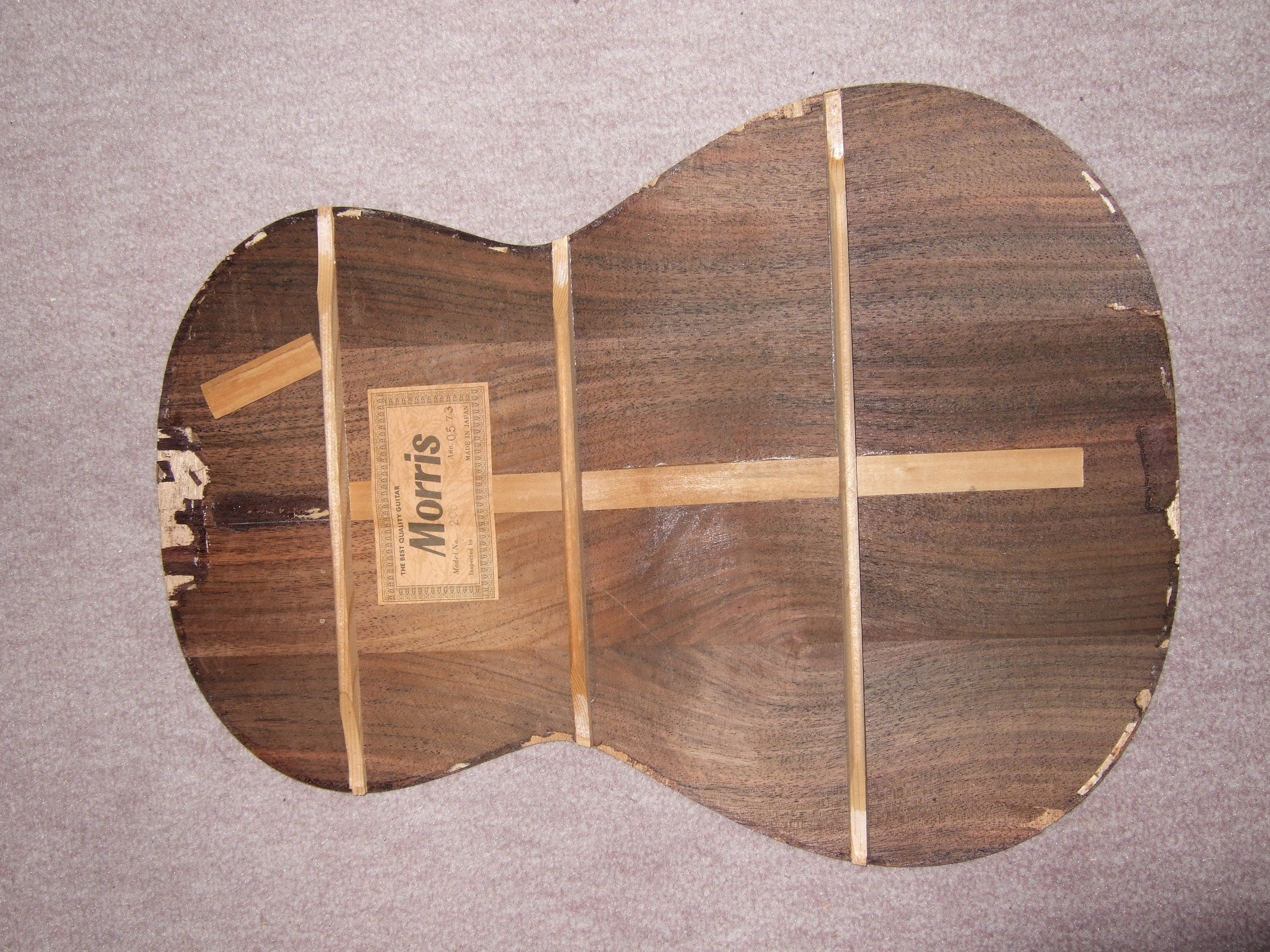 I could have done far worse... Then I made a drawing, as accurate as I could, measuring everything there was to be measured. Next stop?

A friend gave me about 1 m3 of (steemed) beech (Lat: Fagus sylvatica L.). It had been lying in his attic for over 18 years. He could also provide me witch a jar of Hide-glue ganulanes. (I'm still looking for my own supplier of HG) 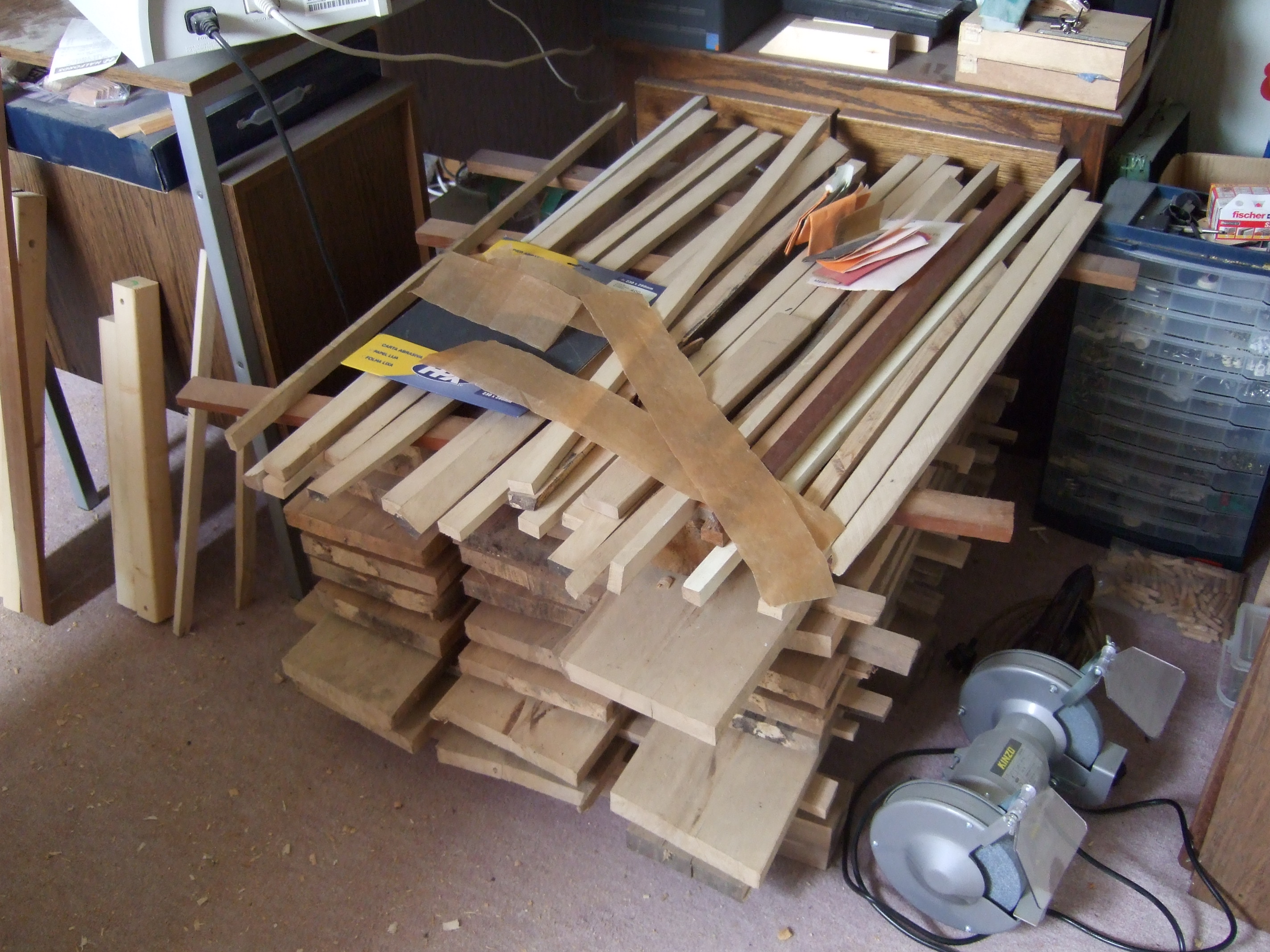 So: how to make a top, back and sides from these planks (3x18x65 cm)? I had to find someone who could resaw these planks to a width of say 3 mm. I managed to find a factory that could help me. Only slight offset is that they say it's only possible to get two 3mm pieces from one 3 cm board... That means losing 2,4 cm. of perfectly good wood.
Maybe one day I'll own my own band-saw.

I had the factory cut up several planks and they machined them down to about 3mm thick. The rest would be up to me, shaving them to more or less the final thickness, using a planer. Now that is a realy difficult job, especially if you are (on the same job) learning how to sharpen your tools....
I take it that you've all been reading Frank Ford's info, so you should know what a “Wagner Safe-T-planer” is. Try google-ing this tool for suppliers within the Netherlands/ Europe and you'll end up with nothing, zero, zilch, nada. That means importing (with all aditional costs) and the extra waiting time. By going through more forums and the like I found a supplier of something verry simmilar to Wagner's device, only now it's called “drill press safety planer”. For less than 35 euro it was delivered the day after I ordered it. Next step: making the sides. I'd need a bending iron, heat source and a form.
I thought I'd get away with a 2 layer MDF form. Using wood to get the hight I need.
By now I know that my next form(s) will be made out of as manny layers of MDF as needed to get the right hight, as the form I'm now using makes that the sides have a possibillity to deform due to the lack of counterpressure in the middle. They can bulge (and they will).


Here's my bending-iron, just a short table-leg (steel), mounted on a steel “table” (my neighbour happend to work as a welder at that moment and he gave me that stand to use with my drill press) 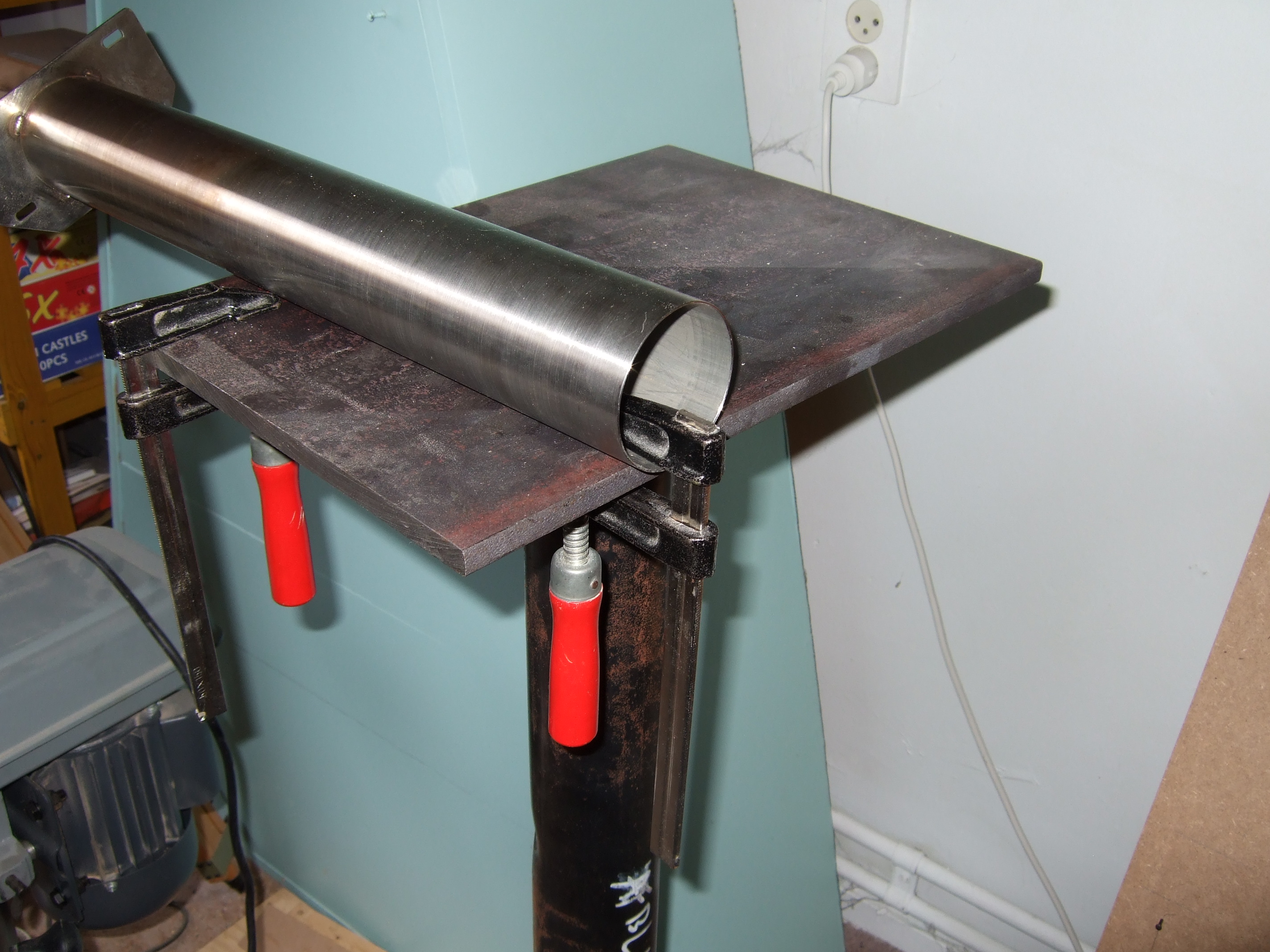 I use 2 clamps (i took all plastic off of them) to hold it in place, using a blow-torch/ soldering torch to heat the pipe).

I realy was supprised how easy it was to bent my wood. (Not that the first result was perfect....) As you can see I need 3 pieces to make my sides... This brought it's own problems. The bottom-piece ends just over the middle of the lower bout... That means I have to try and bent the last few cm of that wood also, but: there's no way to keep that piece down over the hot pipe.. This is how I fixed that, using two “stacks” of two 5 Euro-cent pieces under a piece of steel. Now I could get some pressure on the last cm, by just sliding it under that “ruler”.

Now for attaching the side-pieces. I thinned down an extra board (3 mm to approx. 1.8 mm) an sawed two pieces off. I only needed some water to bent them into the right contour. Next mistake: I glued two pieces without using the mold, so I got it wrong.
Nice characteristic of HHG is that one can easely undo the gluing... Here's the right set-up: (I cover up my mold, to make sure there isn't any direct sunlight (heat)on the wood, in this stage that can realy warp it). I clamped this for a week before I took the sides out and took it downstairs to take a picture. Seems our cat already is my first adept... Next step was levelling the sides. Another mistake I made was gluing in the end-block before the sides were levelled... I took that out, to later reglue after I had sawn it to the right dimensions.

By now (some two weeks later) the sides still are in their mold (better safe than sorry) waiting for the next step(s). Again a picture... On to the back and top.
I had to do most of the final thicknessing before I glued these pieces together: My drill press cant handle pieces that wide (Yes: I also made that mistake...).

I found it difficult to get the top and back halves realy flush. On my lightbox I kept on seeing some light kreeping through. Finaly -lots of patience and a lot of checking on the lightbox- the pieces fitted correctly.
I used a piece of MDF as a gluing table. Putting a row of nails on one side, fit one piece against the nails, then lifting what would be the seam by putting a piece of wood (approx. 2 cm high) under it and then laying out the other part, fixing that too agains a row of nails. Removing the “lifting wood” gave firm and even pressure for an almost seemless top and back. 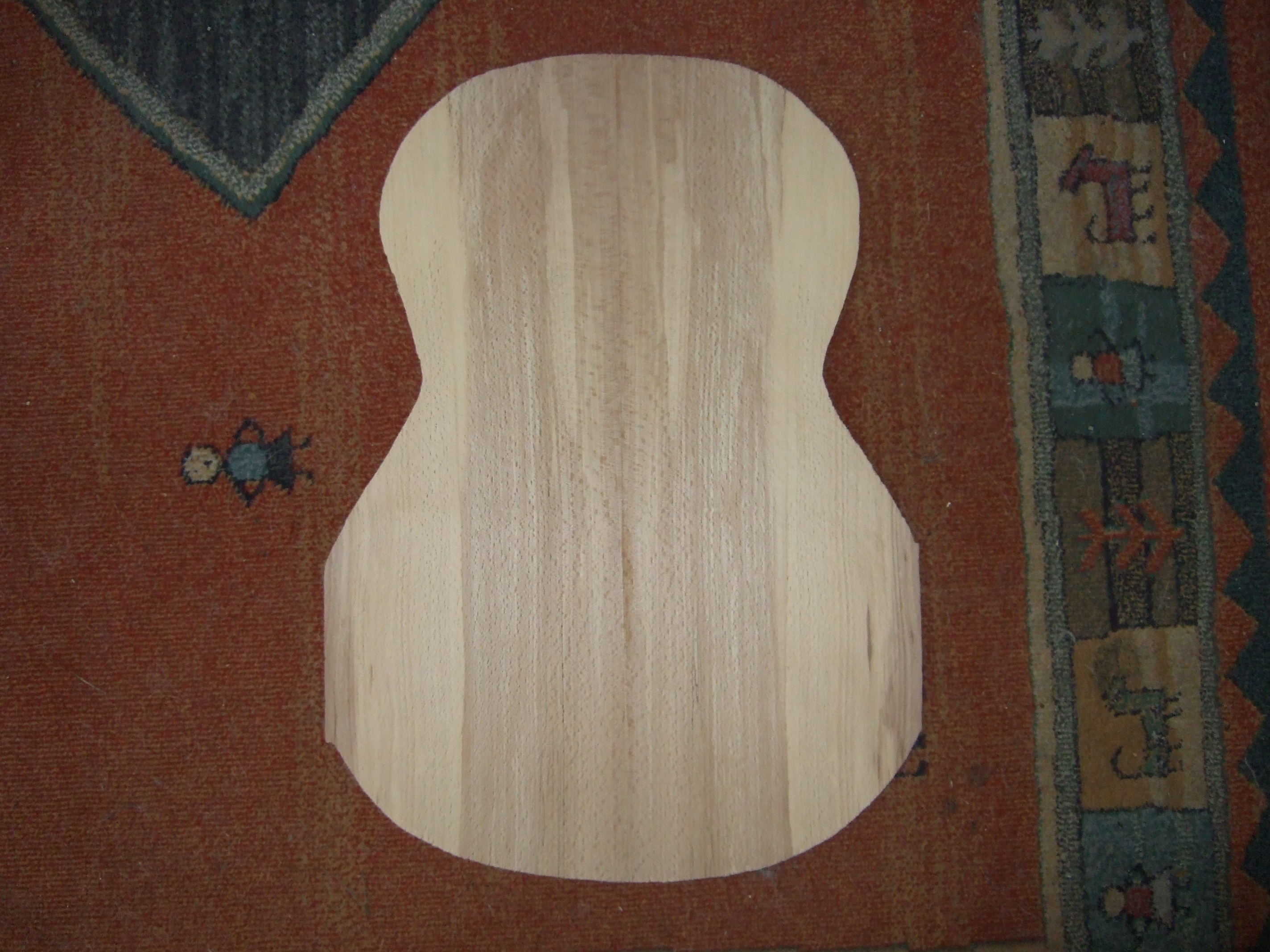 This will be the inside of my back, the outside looks like this: I don't want to use any decorative strips on the back, but had to reïnforce the inner side. I used a piece of Ash (I think it's white Ash, in Latin: Fraxinus exelsior) that I pre-shaped before gluing.

Next mistake I made? After sanding top and back ending with a #240 grit sandpaper, I remembered an old trick to even do a better sanding job... The trick is to slightly wet the surface to be sanded and leave it for an hour or so. This brings up the grain...
A piece of advice, should you want to try this: don't do it, unless the top/ back is tightly glued to the sides. Why? Well this is what happened to my supposed to be flat back: 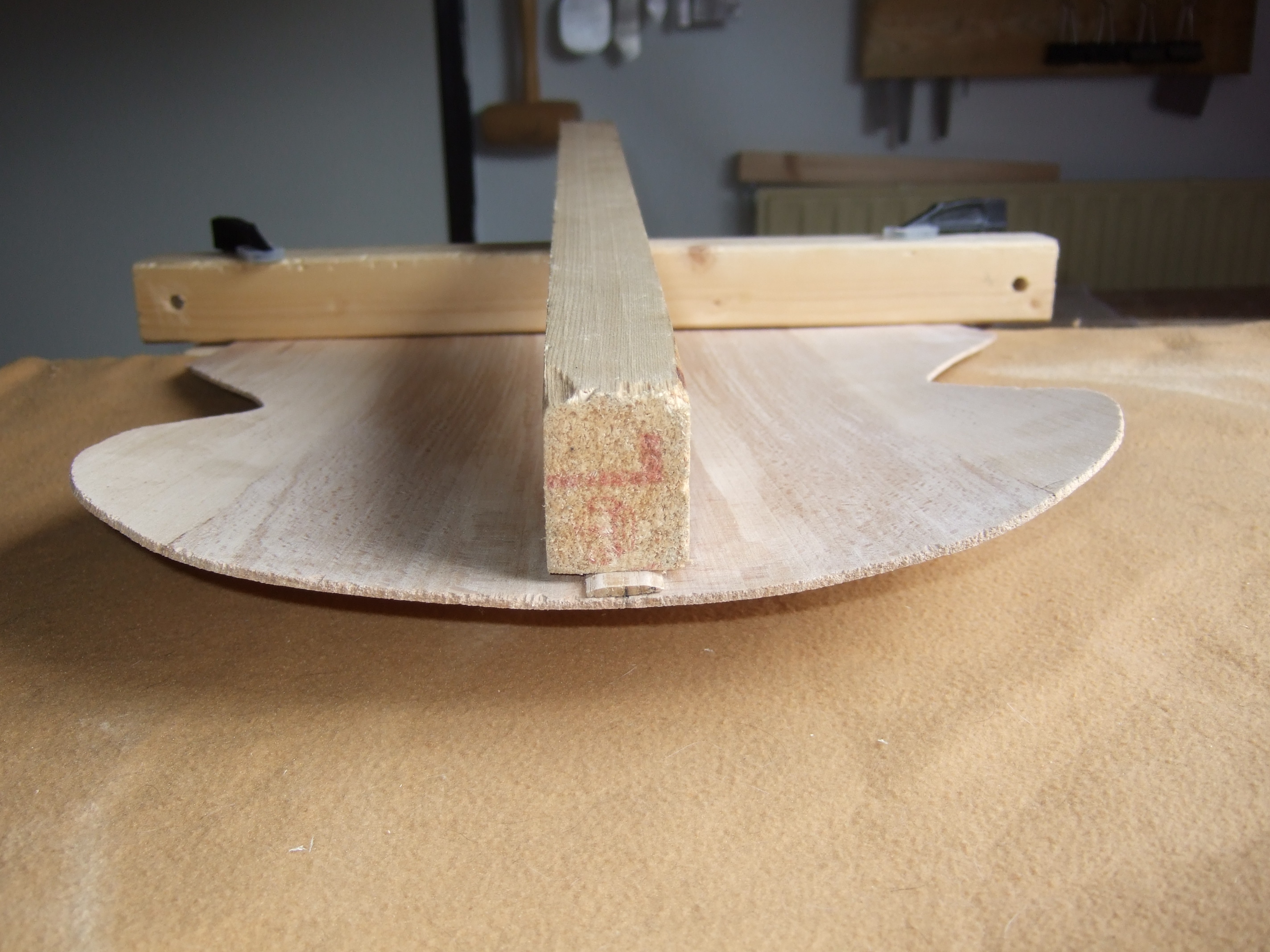 It could be a helpfull way in making a doomed top/ back though... Anyway this happened within (well within) 5 minutes, and it took some 3 days of pressure (and also wetting the other side) to get the flat back back...

Now I'm working on the back bracess... See my 2nd blog in a few days

Comment by Markus Schmid on August 15, 2009 at 5:37am
Hahaha! Great fun reading! Great cabinet making too.
Good luck with your guitar, and don't loose your great sense of humor :-)