I've been working on a 1950s Gibson 160 E that had serious damage around the bridge.  I replaced the damaged spruce bridge plate with a maple one and was re-using the original bridge when in the process of installing the inserts, one of the adjusting screws broke. I was able to remove the insert and get the broken screw part out, but now I need to try to locate a replacement screw. I can only imagine that this will be extremely hard to find. I'm thinking my best bet is to find one in some one parts pile. If any of you have removed one of these adjustable bridges in the past, I'd be glad to buy one of the off you.

Here's what I'm looking for. 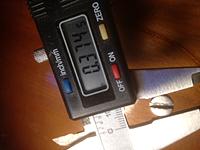 I'm not sure how the forum feels about  putting my email here, but you can google my name and find my contact info on my web site.  Thanks!

That'd be great if you could find another one in someone's pile of parts, but at least you've got one remaining as a sample.

Meaning that any decent machinist with a lathe could probably whip-up one (or even a nice fresh matching pair) pretty quickly.  Good luck!

Thanks Mike!  It never occurred to me to have them machined.  If I need to, I can look into that.  I just hope some kind soul has one they've pulled out during a bridge replacement that they'd part with!

Chris, I believe I have one saved from a job.  I'll have to check my stash, can't be sure until Wednesday.  But if I have it, it's yours.

That would be great, Dave.  I'd be more than happy to pay for it and cover the costs shipping!

I'll let you know, as soon as I locate it.

Chris, I do indeed have a spare Gibson bridge stud.  I sent an email to your Macomb email address, to confirm a mailing address.

Outstanding!  I got the email and have replied.  Thanks very much!

man, with the bridge off aren't you tempted to just remove all that ridiculous metal junk out of there entirely and make a proper saddle for it?

Yep - it sounds like the universe is trying to tell you that this guitar would be better off without that hardware in situ.

I completely agree and it washy guitar, that's what I would do.  My original plan WAS to replace the adjustable bridge with a fixed bridge, but this is a repair for a customer and he has since indicated that he wants to keep it as original as possible for collectible value.   Due to the generosity of Dave Richard, I was able to locate a set of adjusting screws that will work, though they are the smaller size found on later adjustable bridges.  Thank you Dave!

After many months, I'm delighted to say that I have completed the 160E project.  As I stated before, If it were up to me, I'd have replaced the bridge with a new one, but since that was not the owners wish, I restored it to it's original condition as requested. 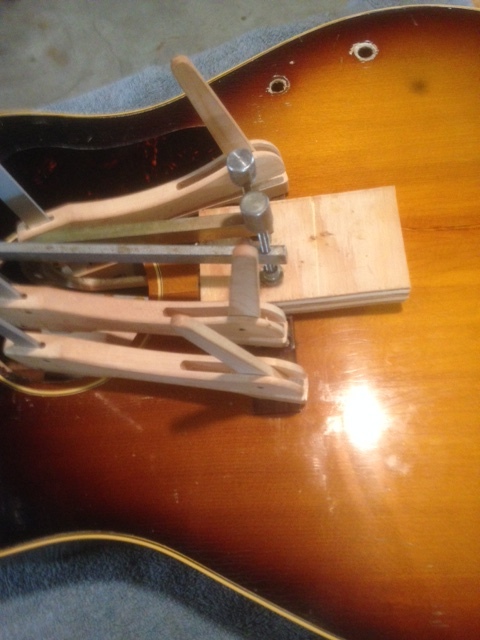 Thanks to the generosity of Dave and the suggestions of the forum, I was able to re-install the original bridge with replacement adjusting screws from a later model.  While they didn't match the size of the original screw heads (which I kept with the instrument) I was able to get the threading to match up.  It looks like minor differences in the screw tolerances were the issue... gentle work and penetrating oil did the trick, though as you might imagine from my first experience (read above!) I was nervous about forcing anything!

There was much more damage than I have addressed in this forum. This guitar had been seriously water damaged years ago and 8 braces were loose and the top had been seriously warped.  The bridge plate (spruce) was cracked and warped (I replaced it with a maple one) and the pick guard was loose and the area under it was badly warped.  In addition, there was a deep scratch across the lower section of the top that went completely through the top layer of the 3 ply top. I was able to inlay wood strips in and fill that damage, then retouch with my very first Nitro-cellulose finish work.  Matching the color was very difficult and I'll be the first to say it's not perfect, but I learned a great deal from this and would approach that part differently the next time. 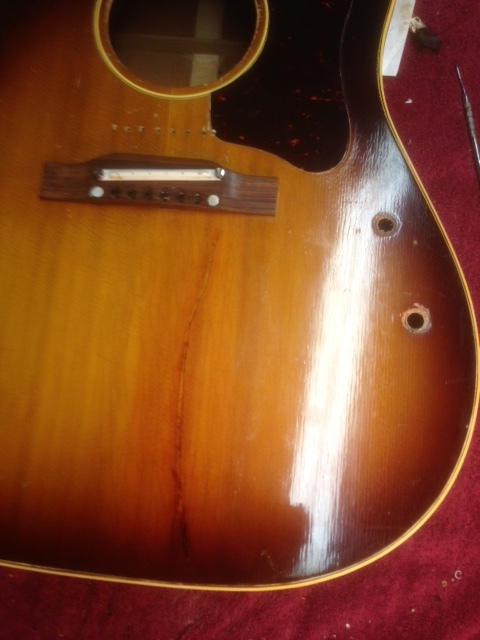 It's been a long and at times difficult project (most of you pro's would have had no problem) but It is now playable and looks much better than I had hoped.  I strung it up and it plays very well with a bright tone and more ring than I would have expected.   The owner has most, if not all, of the original wiring and possibly the pickup so this should be a very nice instrument when fully completed.  I don't do electrical work so that part is someone else job! But, you should do the pick-up re install. This is just about the simplest wiring and there's very little "fishing" involved. Make yourself a 1/4" plug tool  (http://www.stewmac.com/Luthier_Tools/Tools_by_Job/Tools_for_Electro... you're almost done.

Oh, and a soldering iron.