I've had a rather nice late 19th C parlour guitar come into the shop with a  request for restoration.  The soundboard and bridge have some issues and there are previously repaired cracks and a partly raised bridge which needs removing and regluing.

The main issue is the back.It has several splits which again have been repaired by gapfilling splints,

However the result over time has been to lead to the edges of th plits curling outwards and looking very unsightly.

The owner has discussed the optins of either replacing the back or somehow removing it, sorting out the splits, regluing it ansd redoing the edgebandings.

Given the number of splits, I feel that at sometime in its past, the guitar has become badly dehydrated causing the splits to open. Repair was probably undertaken without any attempt to rehydrate, but as the guitar regained its moisture content the expansion of the wood caused the splits to bow outwards due to the inserted splints. 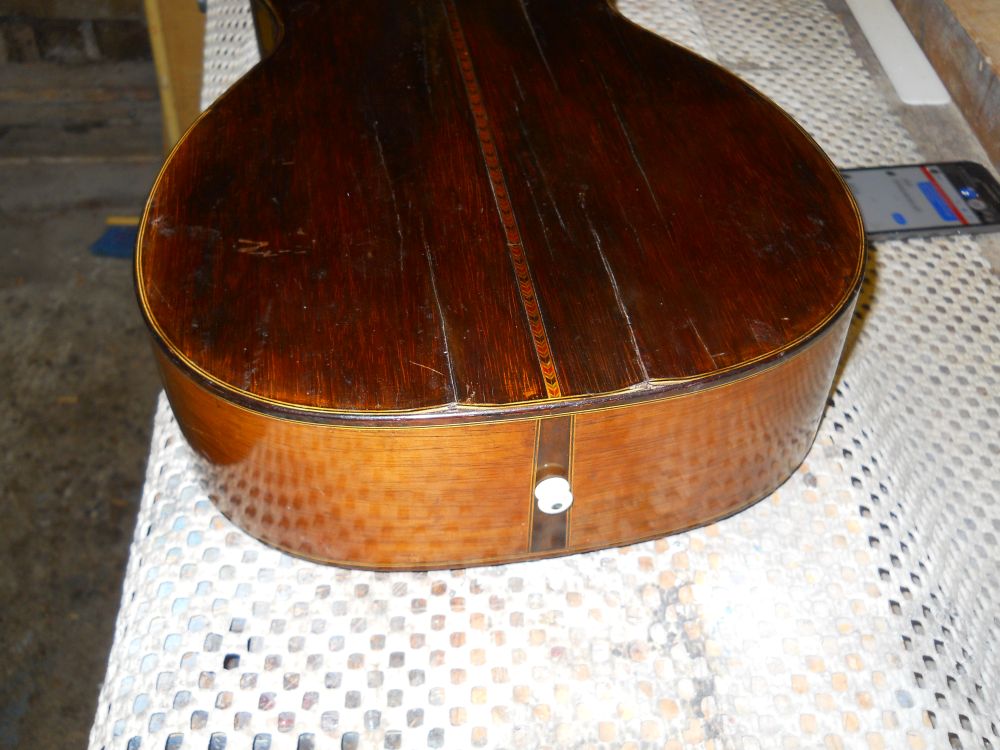 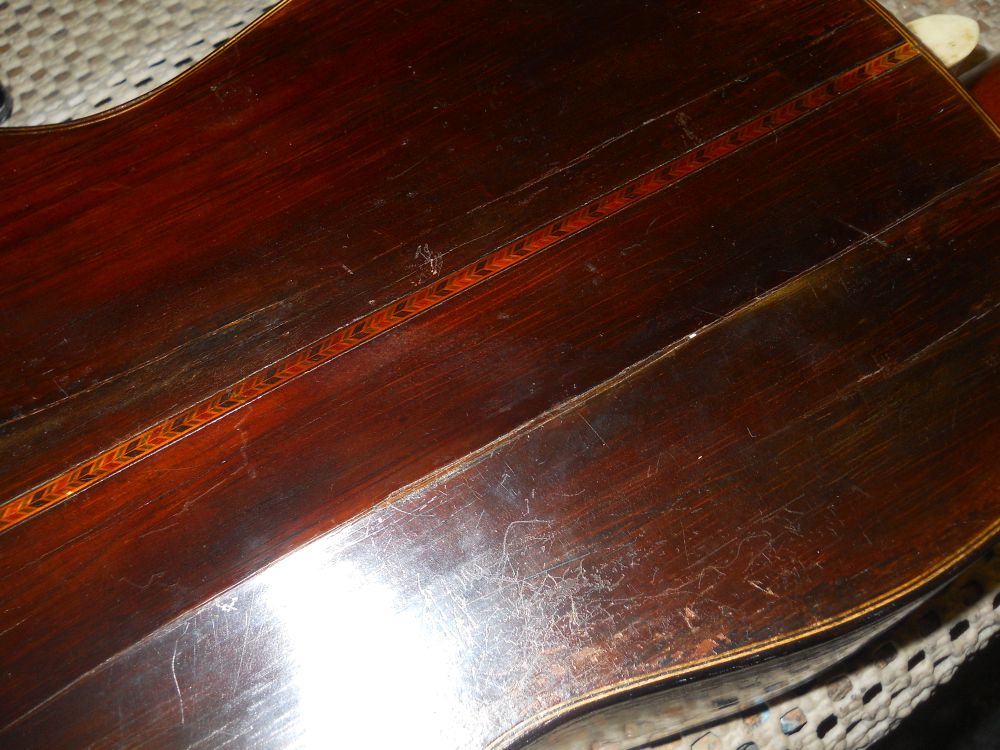 I would be interested to hear people's thoughts on how, or even whether to undetake this repair!

Replacing the back would be one option, with the downside that it would doubtless reduce the instrument's collectability. However, I  dont feel confident about repairing the current back without using some fairly hefty  internal studs.

Would greatly appreciate some assistance from your collective wisdom and experience..

I would loosen the bottom and repair it. Keeping the original wood is important, especially fine wood like this.

If the binding around the bottom is wood and not celluloid maybe the best way is to use a thin Japan saw and saw the bottom loose cutting below the binding through the kerfing. You will get two puzzle pieces fitting together that can be glued back almost invisible. The sides will be a bit lower, the width of the saw cut. If the binding is celluloid it will come off using a razor blade and some patience and the bottom can be separated at the glue line. You will probably need a jig or a plan to be able to glue back the bottom and binding matching the sides.

With the bottom off any repair inside should be an easy fix. Removing the bottom braces will make the crack repairs of the bottom a straight forward and easy job.

A coat or two of spirit shellac based lacquer or shellac on the bottom and sides will hide the wounds and cracks. I use fine steel wool to dampen the sheen and then a linen cloth to rub back some shine with friction heat (after a week of drying for the spirit lacquer). Will look pretty original when done right.

I do all of this and more for every restored GammelGura (OldGuitar). I improve the top bracing for better sound among other things. You can check my Swedish site for more info and pictures, www.gammelgura.se.

Some of the guitars of this vintage were lined with spruce.  The variation in shrinkage between the spruce and the rosewood would produce cracks like that.  If it is lined with spruce, I don't think it would help much to take the back off.

Fortunately that doesnt seem to be the case.

Many thanks for your response. Regarding your suggestions, I bow to your obvious experience in this respect. All in all, I am happier removing the back as it would have been difficult to match the  original wood or the centre strip banding.

However, the edge bandings and purfilngs are easy to match and consequently I am considering a slightly different approach. I have slight reservations of your idea of cutting through the sides just below the edge bandings. I am a little worried about what to do when i get to the end and neck blocks and anticipate some difficulties. My original idea was to rout off the edge banding and then ease off the top, using heat . moisture and a separating knife. After refitting i would re-rout the channels and fit new bandings and purflings.

One of the things that concerns me most is the gapfilling splints that were placed in the cracks. I feel that they are a cause of the wood curling away from the cracks. What i would like to do is remove them, lay the back out, either on a flat board if the back will take it, or on a board with a slight radius, glue the cracks if they will close and use crosgrain cleats to strengthen.them.

Thanks for the link to your website. It looks fascinating, but sadly I don't have the Swedish to cope with it!

There are many ways to a good end result. Routing off the binding is one if you can match the original binding. You will find the glue line and separate the bottom from the sides and blocks the usual way. Cutting through the heel and end block with the saw is no big problem though, you still got two fitting pieces of a puzzle that goes together nice and tight with hot hide glue! The neck will probably have to be off though.

Yes, removing the old splinters is necessary. With the back off and if the bottom bracing is firm it's possible to get a better crack repair with cleats to secure the cracks. I find it easier to remove the back bracing and do all that work with a loose flat unrestrained bottom. Regluing the original or new bracing is a simple enough task when done with the cracks.

Thanks for checking out my site. You can always put the URL page link into Google Translate and get everything on the page translated to English. All the special guitar words (or any other special word) will be translated literary or left as Swedish though. The big story can be understood with some creative reading ;-)

Thanks Roger. With the help of Firefox's translate function I managed to obtain a pretty close translation although it struggled with one ore two words.

Looks fascinating! I have only browsed it for about 20 mins, but will certainly return to read it in depth.

Check out this post. Here I use a the very thin Japan saw (0.1 mm thick blade) to cut away the bottom. The binding is brittle ivory on this fine guitar, the hard ivory made it easy to follow the edge of the binding with the saw. Click on the pictures for bigger ones!

The only thing you can see from the operation now is the extra glue line at the bottom of the kerfing if you look inside. Also, the side is about 0.2 mm lower. The time used for cuttting was shorter than the time it would take to glue a new binding and clean up the mess after that.

Many thanks for all your helpful input. After a little deliberation, I have decided to opt for sawing off the back. The customer involved has given me another guitar for similar attention, which very much lends itself to this treatment.

A couple of further questions:

Would it help to use a marking gauge to score the cutting line? I feel that may aid in keeping my saw from wandering, and:

Would this type of saw be appropriate at 42 tpi? The finest I can get in other saws is 26tpi which I feel may not give a fine enough cut.

I don't think a marking gauge will do any favors as long as you can see the edge of the binding clearly. Close inspection, maybe using a magnify glass of sorts, and careful sawing is the way to do it.

I think that saw would work. Stewmac have the really thin one I use, thinner and with fine teethes.

I thought the Stemac saw was 0.1 mm! Anyway. The Axminster one will work just fine. It's very easy to bend or break a thin saw like this, you have to be careful and don't get stuck. In fact, a litte bit thicker saw is maybe easier to work with and will cut straighter, the extra thickness don't really matter when done.

Added a drop-down list in the menue to make the Google Translate easy and intantly from Swedish in the WordPress site. To many different languages, among them English! :-)