Member Roger and his work is the subject of the cover story of the latest issue of American Lutherie.

Thanks! I don't know when the issue hits home. I know I will have to wait a couple of weeks before I will be able to see it living outside the US. If you read it and want to discuss something about it, this is a good place to do it :-)

Well done Roger!  I look forward to reading it and asking some questions - after my copy finds its way down here to Australia. cheers

Still waiting for my issue.

In the meantime, I just restored two almost identical Levin parlors, one with the slightly harder set of plugs I found with my test guitar. I'm happy to say that this one indeed have more volume, attack and more distortion. One proof is that the customer played and sang using both guitars, the voice was louder on the guitar with the normal softer plugs, but the one with harder plugs matched the volume of the singing.

Also, I had a full size Martin dread in for a set-up. The thick E-string had lower volume than the rest of the strings. I gave the string a really hard bubinga plug with the BridgeSaver tool without removing the bridge, the plug was almost as thick as the bridge plate and top reaching close to the underside of the bridge. The volume and attack on the string increased and matched the volume of the neighboring A-string.

I've read it, you come up with some really clever ideas/solutions.  I've read with interest you solutions here on frets, too, and am glad you can get some of your ideas in print .. way to go!

...and today the magazine arrived! Looking good I must say :-)

Hi, Roger, have just read your article in the GAL magazine, great stuff. Very informative and thanks for making your research available. The photos were fantastic as was the whole presentation. I have always been one for testing and trying new things.

There must have been a reason I have been saving all my bone nut and saddle offcuts. Haha. thanks again. 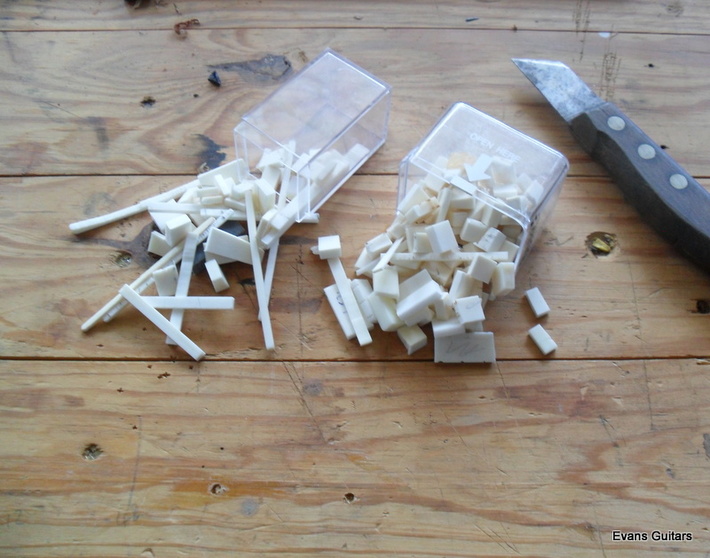 Thanks, that text is the one I have spent most time doing, usually I just write and be done. A lot of work goes into an article like that.

I do everything in the article for each "GammelGura" restomod and the guitars sounds great every time. Some customers even hear the same things as I do without being told, so I'm pretty sure it really works. The only drawback is the time-consuming and tedious job measuring for the nut intonation, that part I could be without - but I can't.

You have plenty of material to try out a segmented saddle, I hope you do the experiment. I do my bits from perfectly formed blanks with my diamond blade Proxxon cutter. With that, I get 90 degree cuts and a professional looking saddle. Making it by hand with a jig that I did in the beginning don't really give you the precision needed :-)