I've been working a couple of days a week at the local Lee Valley for a few months. I give them most of the money they pay me in exchange for tools. Yesterday I discovered that they have just introduced a hot hide glue pot and warmer for $46 cad. It's a replica of an 1840's glue pot. The warmer looks like a cup warmer.

I went straight in to the back and found one to check it out, it looks very good. I'm going to work with it over the weekend, if anyones interested I'll let you know what I think. 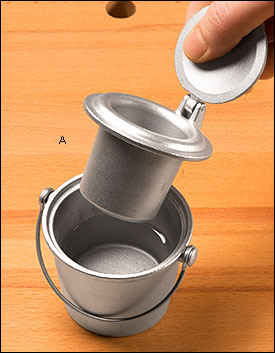 Love the small size of it.  Sure, looking-forward to the report!

Looks like a nifty little pot for the small batches that I like to use.  I keep my jelled glue in the refrigerator, where it will keep up to 3 weeks before I note a funky smell or see mold, but I usually use it up before then and make a fresh batch.  I'd be interested in this pot if I didn't already use this set up (see attached image).  I can get ready-to-use hhg within 5 minutes using tap water (~ 130) and then on the little heater to keep it liquid for as long as I'm working that day.

To demo it we butt joined 3" pieces of 2x4, by rubbing them together until they stuck. Within thirty minutes it was impossible to get them apart with your hands. The glue stayed within five degrees of 140 for the four hours of the demo.

The size of the glue pot would easily accommodate one of Franks hhg cubes. I have a bigger set up with a chocolate fondue heater and a stainless pot I found at IKEA. I have to say I like this set up better,  the heavy cast double pots with the lid,  fit well and do a great job of retaining heat. All in all its a reasonably priced rig that works very well.

I left the messy one at the Valley and took a new one home.

Thanks for the review, John.

I have always been "thrilled" with Lee Valley/Veritas products. VERY HQ products at a supremely reasonable prices.

It's size is perfect for my bench where HHG is used, but infrequently.

I just read the user instructions and it says preheat the cup and water bath w/boiling water, toss it, add more boiling water to the bath and prepared glue to the cup and it should come up to temp right away. 30+mins didn't seem right.

Yeah that does seem like a long time. I see that the little pot is available separately from the "cup warmer", so maybe it'd be better to buy the pot by itself, then use whatever existing hotplate that's handy for the heating?

As an aside, I bought a "official" Hold-Heet gluepot about 10yrs ago and have never used it!  It's just too big for me, since I tend (like a lot of other folks) to make small batches of HHG as-needed. 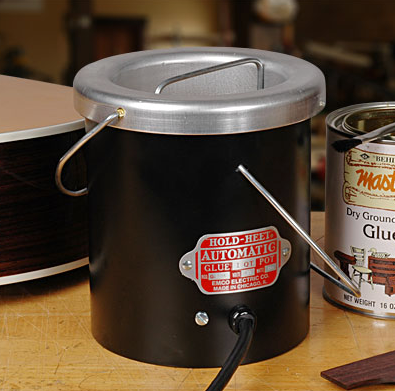 I use a small plastic squeeze bottle with ~2oz of HG in it kept in the fridge and a baby bottle warmer. Never thought to kick start it with boiling water. It's pretty quick as it is. The pot should fit in a Hot Pot. They're pretty reliable and adjustable. Gotta' be a way to make the inner pot fit in a Keurig. ;')

To clarify, the warmer costs two dollars when you buy it and the pot together. The warmer does a great job of keeping it at 140 but if it's the only source of heat it will take awhile to get there. If you fill the outer pot twice with boiling water ( in my case I filled it once, set up the table that I was supposed to demonstrate it on, checked the temperature and filled it again with boiling water) it will get to 140 in a reasonable amount of time.

I was using the stores 260gm Bloom strength hide glue.

Oh, you're right!  Ordered with the pot, the little warmer is only a couple of bucks more.... that's a great bargain and worth it just to have a nice mug warmer on hand, even if other means are needed to get the glue up to speed quickly.

Hmmm, just might have to order the set :)  Thanks for the tip John.

I use hot hide a lot and popped for a slightly used Herdim glue cooker, it will hold a steady 140 degrees all day. They come with two small ceramic bowls and I had my potter daughter and son-in-law make me five more. This way I can have different viscosities mixed at the ready and a few that are empty in case I want to start a new batch(es). I use what I need, put the bowl in a Ziplock bag and then into the freezer. The mixed glue will keep for a long time this way. The great thing about this is that I don't have to make a fresh batch every time I need it, I just fetch one out of the freezer. I haven't and won't test the limits of storage though, hide glue is cheap and easy to make. I think around 3 months is the longest I can remember milking a batch.

Looks to me like the best feature of the Lee Vally pot is that it won't break if something happens and it hits the deck. The cord on my Herdim cooker has found it's way into my feet more than once, so far it hasn't hit the deck though.

It's been about a year since this glue pot came out. Any long term reports?

Yeah, it's been a great little pot. Hadn't thought about it in a spell, but it's worked nicely. One of these days I'll probably sell my (never-used) one quart Hold-Heet® pot because I simply never need that quantity at a time.

So, a thumbs-up from me on the little Lee Valley pot.