How thin is too thin for a cedar top?

I wanted to make my next guitar with a really thin top, but I think I might have gone to far. I'm at less than .100 without braces attached.  Will I be able to brace it up without it collapsing under string tension?

What's the thinnest anyone here has successfully acheived?

IMO, that is too thin, especially for Cedar.  If it were a very stiff spruce, I might consider using in on a parlor, but I'd set it aside since it is Cedar.

Yeah, that's mighty thin for cedar...  But, maybe (since it's that thin now) you could reserve it for future experiments with building a "double-top" with a nomex sandwich?

What Mike said is what I though of too. I think it was posting that someone made here that led me to it, but I remember that it showed a top design that used lamination and a "flying" system of bracing. The site is for Brunner Guitars and he calls the top a "flying top".  Take a look at this link

I got this picture  from his site just to illustrated how the top is laminated. 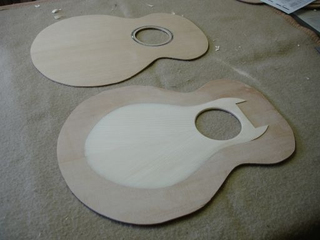 Top thickness is only one part of the equation.  Top stiffness measured with a repeatable methodology such as a deflection testing regimen that you adopt and persevere to record as much data over time from as many tops as possible is every bit as important as a static thickness number.  Every top is different even when it may have come from the very same tree.

Then there are the more subjective parts of the equation as well such as how well a piece of tonewood rings, how glassy it may sound, how you brace your tops and how much mass you are adding with the package deal, as I call it, more commonly known as the bridge, top, and bridge plate.

Anyway many of us deflection test and even though there are likely infinite ways to do this what's important is that you do it the very same way every time AND record the data and then revisit it with data from the resulting guitar, when new, maybe 6 months down the line, and even more time too if possible.  Only then, over time and when evaluating the results will a specific thickness be an important part of a repeatable way to get that sound once again.

The entire point, at least to me of deflection testing is to acquire empirical data and then reference it to a known and desirable result.  The problem is that deflection testing will not help you at once, unless you are selecting one of say three possible tops based on say thickness only.  But even then it may be that there is an ideal stiffness for how you brace and the stiffest top may not be the best sounding in this respect.  And there is stiffness along the grain and across the grain too...

For me before I started deflection testing I would not go thinner than .130" for a WRC top on say a dreadnought sized guitar.  I have one on the bench at the moment with a WRC top and I went .125 since it's an OM AND this top tested very stiff.

I do have to ask why you are interested in a very thin top for the sake of using a very thin top?  No disrespect intended but I once witnessed many folks on a forum being influenced by a legendary and very talented Luthier, Somogyi, who has used some tops that were approaching .065"....  What many did not seem to get though as they too over thinned tops resulting in some instances in "thin" sounding guitars was that Somogyi has far more to his methodology than using a thin top.  There is the uber-stiff "double sides, the rejection of 100 tops to find one stiff enough, and special bracing and many very special techniques for optimizing every aspect of the guitar's construction with an eye on producing incredible sounding guitars.

Nonetheless many took the thin top thing out of context, didn't read the books or take the course and ended up with a thin sounding guitar that over time has the top caving in front of the bridge and over bellying behind the bridge with the braces telegraphing though all over the top.

Anyway, and sorry to be long winded.... .100 in my opinion is too thin for WRC even if this is a very stiff top.  I once over thinned a top after installing a very nice BRW rosette....  It was too thin to hold up so I offered it to a fellow I know who was teaching kids to build guitars.  He wanted it and any other materials for his classes to learn on and with the caveat that one can compensate to some degree for an overly thin top with bracing that top was donated to helping the next generation learn something about our craft.

Thank you all for your replies, even though you told me what I didn't want to hear.  Sounds like I'm going to have to try again, which is disappointing because I did a really good job with the rossette!

To answer Hesh's question, I wanted a thin top because thought it would be more responsive, but you have pointed out the err in my thinking.  However, you have intrigued me to the point that I might want to continue with this thin top just to hear what it would sound like - just before it caves in.  What have I got to lose, besides a bit of binding, lacquer and time?

What do you have to lose?  Nothing and it can be an interesting learning experience.  I just would not ever consider selling or even giving away a guitar with a top this thin.  What I see from time to time when working with individual builder instruments with thin tops is the over animated top as mentioned above (excessive bellying behind the bridge and caving in in front of the bridge) and the telegraphing through of the braces.

What we hear, I say we because a number of us have discussed this topic at length in real time and real life with some of these instruments in our hands and what we seem to hear, even though this is subjective, is a thin sounding guitar.  Remember too that tops resonate and it's possible that there is a sweet spot in top mass and thickness that once exceeded with thinning there may be less top now producing the tone that we seek.

But sure use it anyway and that's how we learn.  I have a 2.9lb L-OO that was built with failing being an acceptable out come.  It was both a mule and an experiment to see how light I could build.  The top is stiff Euro spruce and slightly less that .090 in some places such as around the lower bout.  It sounds a bit thin to me too, I can see telegraphing of the braces, it has a nice belly, not excessive, and it's my favorite personal gutiar to play.  It was built to never be sold but to see how it holds up over time and use (I use it every day) and as a mule for playing around with bridge mass.

If you build with this top for your own information not only do you have little to lose IMHO but perhaps much to gain.  And yeah it is difficult to let the nice rosette go once we like what we have done.

You have caused me to think a little further about this project.  I am relatively new at building guitars and quite willing to learn the hard way.  I was building this guitar for my own pleasure and experience and not really intending to sell it, but you know what?  If it turned out nice and someone offered to buy it, I would probably sell it.  I have enough sentimental guitars already.

The potential problems you identify could only reveal themselves long term, after the guitar is out of my hands.  Like William says, it could haunt me far beyond my learning experience - even if I give just it away.

I think it's pretty clear by all the considerate replies what result I can expect and I don't see much of an upside other than learning what you guys already know.

I think I'll take the high road back to the wood store.  I haven't wasted a lot of time on this thing so far, and really, putting in a nice rossette is not that hard.

Thanks for all the valuable input,

With your thin top, thin sounding experiment. Have you ever considered try a Bridge Doctor on it just to see if it improves the sound?  I like BDs for their repair capabilities but I've never really notices any positive changes in the sound, ( I've never noticed and negative changes either.)  I have, however, heardof a lot of people that insist their instrument sounded better once one was installed. I usually don't put too much into this since it's a very subjective and could be influenced by expectations but in your case, I though it might be an interesting thing to try. Just a thought.

I've built with thin tops before and found the effect was a very boomy bass.  We like bass, but not like I'm talking about.  Hit the low e string and BUUUHHH-WOOOOOOOMM sound. Very over-powering.  I'm sure this is not everyone elses experience, but it was with my build style and bracing

My only reply to all this talk about a thin top is don't ever sell it as it will come back to hont you the rest of your life. I tryed that on a F styled Mandolin once and gave it away.Guess what the guy sold it to a lady and the first thing I new it was back on my bench for a repair as it had my logo on it. So live and learn..........Bill............

No engineering variable can be optimized until one have exceeded optimal in both directions.   Make your too thin top.

I agree with Glen H, the sonic performance will be compromised even if there is not Structural failure

There is a popular school of thought that the best guitar is one that is built to just short or failure. I consider that a very simplistic and inaccurate concept.