I want to obtain a neck heat press device like the one in the pictures in the link. Does anyone know  where to buy one? Or, does anyone know where to find plans to build one?

Great! Thanks for the picture Scott.

Here's the thread where Klangfix explains his setup:

Scroll down to close to the bottom of the first page.  It kinda of seems over-engineered and inflexible.

Here's a frets.net topic on building the common controller for silicon heating blankets:

As Mike said, straightening a neck is iffy. I've tried it on a couple of guitars - one has held, the other not. The best thing is probably to pull the frets, try to straighten the neck, wait a several days and refret. Begin by leveling the fretboard. The truss rod nut should be appropriately tightened/loosened depending on the bow. I don't have enough experience to say but maybe some others could chime in on this.

I agree, it can be iffy if you don't use the tool regularly and have sufficient experience with it. As far as durability of the repair, that will vary. A bad piece of wood may not ever stay true. I have a 1965 Fender Precision Bass that I bought over 25 years ago. When I got it, it had a hump at the body end of the fingerboard. I heat pressed it, and it's been playing perfectly ever since with action set at 5/64" and the body end of the fingerboard. Planing a veneer fingerboard like the one on this bass is not a good option, but it might be a good option for other instruments.

Reading the last comments oh this matter I think Scott's approach is very interesting and worth paying attention.

There are a lot of procedures that take years to master and there is no teacher like experience. Probably the ones of us unsuccessful with this heat straightening haven't given a lot of thought or practice. Probably you could share with us the trouble you went through when starting to heatstraighten necks.

Thing is, you find a lot of info on the internet and books. I have very good books on guitar repair saying you should heat the neck and very books saying you shouldn't. Websites of respected luthiers claiming its wrong and websites saying it works both with good and believable explanations of why it works or why it doesn't. Forums where some guitar players say their heat treated necks remained straight as an arrow and others complaining about it. I think is important to mention that on guitar players forum no one specified what's a straight neck for them or gave any measurements of the final results in action.

I have to say i'm with Rusty here, the explanation that convinces me more is the one that says it won't work. But i'm always open to new stuff. I have to be honest, i'm a really young guitar tech/repairman. I've just been in the trade for eleven years, but still i have something i'd like to share about the matter:

As far as my experience goes with both hard to straight necks and heating necks to straighten them this is:

On heating necks for straightening my experience is more second hand:

The experience was really fun and i think i learned a lot. I still think heat straightening can work but would take a lot of experience. I actually thought of a curved caul to bend necks with the shape of the back bow wanted. I don't know it that'd work but i think's a good idea if it does. Problem is every neck is different and i don't think you can standardize something like that. Maybe if i was some sort of genius, which im not.

At the moment i know ways to straighten necks that work really well. But also think It'd be fun to learn the right way to heat straighten and be proficient doing it.

The  "old electronic engineer" you're referring to is most likely the so called "Tucky", who was not an electronics engineer per se, but well into electronics, both guitar and amplifier. What happened to his heat clamp? Saúl Zermeño -another local repair guy- kept it. He bought it from Tucky's wife after he passed away. The other guy with the Aria heat press is no other than the "Killer", which yes, kept the heat press after the music store went out of business. Lucky him, as they're quite expensive! You and I both know what he's worth though. That said, yes, charging people for three months under the heat press is most definitley a ripoff. I've gotten lasting results overnight, so three months seems outrageous.

Good thoughts From Mario. On the Dan Erlewine method; it works well in certain situations. In fact, Rickenbacker use to include similar instructions for adjusting the truss rods in their basses. Rather than clamping, they suggested you physically bend the neck back and tighten the truss rod. Then again, they would only warranty their basses if you used the original very light Rickenbacker bass strings, and I've heard their truss rods described by other shops as looking like they were made from parts scavenged from screen doors.

My first heat presses were done with necks clamped in place against an oak 2"x2" place in front of a space heater. That was back in the early 1970s. I had some successes and some failures with the process. I overheated necks and had kinks as described by Mario. I had finish bubble on several Gibsons and Guilds. left the truss rods at tension in a Rickenbacker Bass and had the fingerboard pop off. I had a fingerboard literally fly of a Kay 1/4 size upright. One of my employees set a vintage Gretsch on fire when the pearloid inlays hit their flash point. The other day I mentioned having to do a Kasha classical. Well I went a bit too far on that one and ended up with a minor crown in the fingerboard. I had to do a slight repress in the other direction to correct the it. The 2nd time was the charm. One learns by experience. I've pretty much analyzed what was successful and wrote down my methods so that my employees, which sometimes numbered as many as 8, could perform the process without me looking over their shoulders. I also finally made the time to take photos of the procedures and build a heat press device that replicates the unit I have success with.

I've had an Aria heat press for thirty years. I've had many successes with it. The U shaped clamps that come with it are worth the price of admission. There is a temperature control but temperature can also be adjusted internally, it's a mechanical device. It's been several years since I adjusted it (it fell off my bench and the temperature dropped) and I couldn't give somebody a step by step but I looked at it for awhile and figured it out. It heats up fine now. I know there are guitars out there that I heat pressed twenty years ago and they're still good. I have a second heat press that I inherited, it's got a silicone blanket in a rectangular tube. I don't like it as much it gets too hot too fast.

It doesn't suit the armchair theorist and it won't just do the job for you. There is a learning curve involved, you have to try it and pay attention to what works. I can't relate to anything negative I've read about this tool, it does the job it's supposed to do very well most of the time.

Except for our experiences with the Aria version of the tool, you and I have experienced similar results with the procedure. I did like the clamps that came with the Aria, but my padded wooden cauls work just fine.

I'm guessing if you'd been able to get the Aria running at the proper heat you'd still be using it. I find I have to take the shape of the neck a little past what you want, sometimes more than others. I use mine with the heater on the bottom too. I wait until the back of neck is warm and then leave it in the clamps overnight. I only charge for it when it works and if it needs to be done several times for it to work  there is no extra charge. After mine dropped I made a box for it.

I did like the clamps. Using normal clamps is sometimes a 3 handed operation. I'm sure the Aria unit would have worked right if I could have gotten it to heat up enough. I follow the same protocol of clamping the neck a bit further than where it needs to be. Wood springs back a bit from memory, and one wants to give the wood a bit of amnesia. I leave necks clamped until both the neck and heating device are back to room temperature. If I have the luxury of letting one sit over night, I do that. I too didn't charge on the rare occasion where heating didn't work, and I only charge once for the operation no matter how many times the neck needs to be pressed. If the neck comes back in a week with a problem, I don't charge. If it comes back in a year, that's a different deal. I generally charge 1/2 hour of time for a heat press. The press is usually part of other work that needs to be done. Often a guitar will come in for a set up and the neck is bowed beyond what the truss rod will do, so I add the heat press charge over and above the set up charge.

My heat press is a solid aluminum bar. You could run it over with a tank and not damage it. My original one from St. Louis Music had a permanently attached ac cord that tore off. The ones I make have removable ac cords.

By the way, I came up with a clamping regime that allows me to do neck angle changes without having to do a neck reset. The procedure is not as consistently reliable as the ones for removing crowns or bows in necks, but it does eliminate about 50% of the neck resets one would have to do on low $$ value guitars. It works consistently on Kalamazoo KG-11s and KG-14s, most of which come in needing the neck angle increased, and it works well on Harmony guitars. 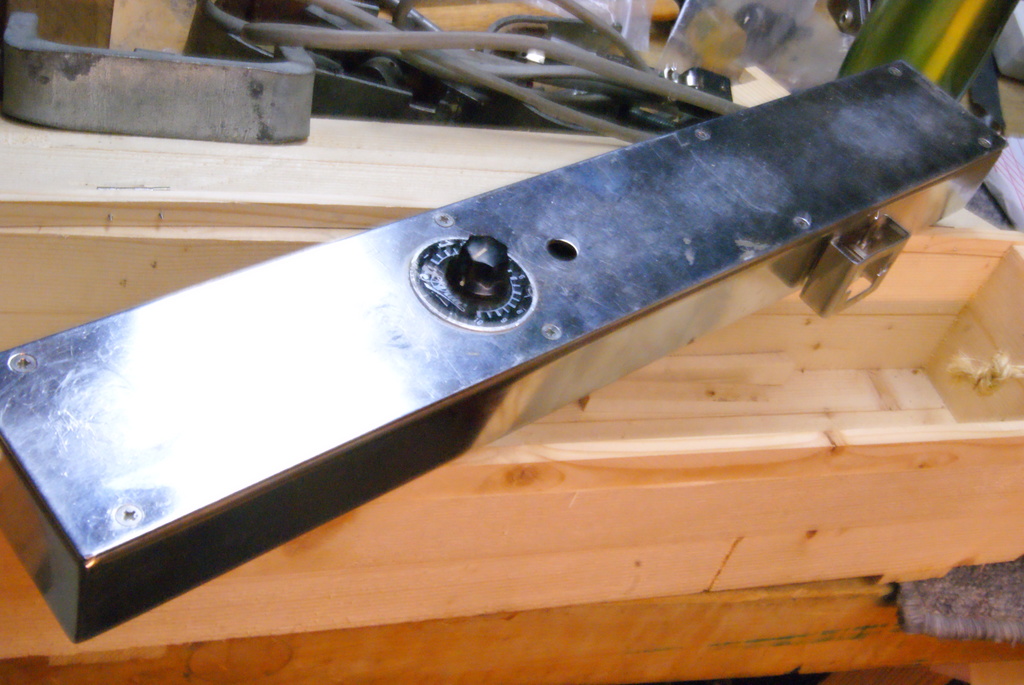 Wow! Really interesting discussion. As a novice, I had no idea that such a device existed. My $.02 with what I've done after having the procedure explained to me by my mentor. I've done several bass necks with this process, one of which I still have and it hasn't migrated in 3 years.

Having the aluminum square tube and clamps pre set and handy, I use a heat gun to warm up the neck until it's uncomfortable to hang on to. Then I clamp it up and wrap damp towels around the neck between the clamps. Follow that with several dry towels wrapped as tight as I can get them and leave it for a couple of days. Then unwrap the whole thing and let it sit for another day. Take it out of the clamps and let it sit for another couple of days before checking it. If it's not quite where I want it, I repeat the process with a little more juice on the clamps. I've done as many as four iterations of this. Obviously I'm not counting on this for a living, but it's salvaged a couple of necks.