Regluing loose sides/kerfing on vintage Gibson, and how to place glue? 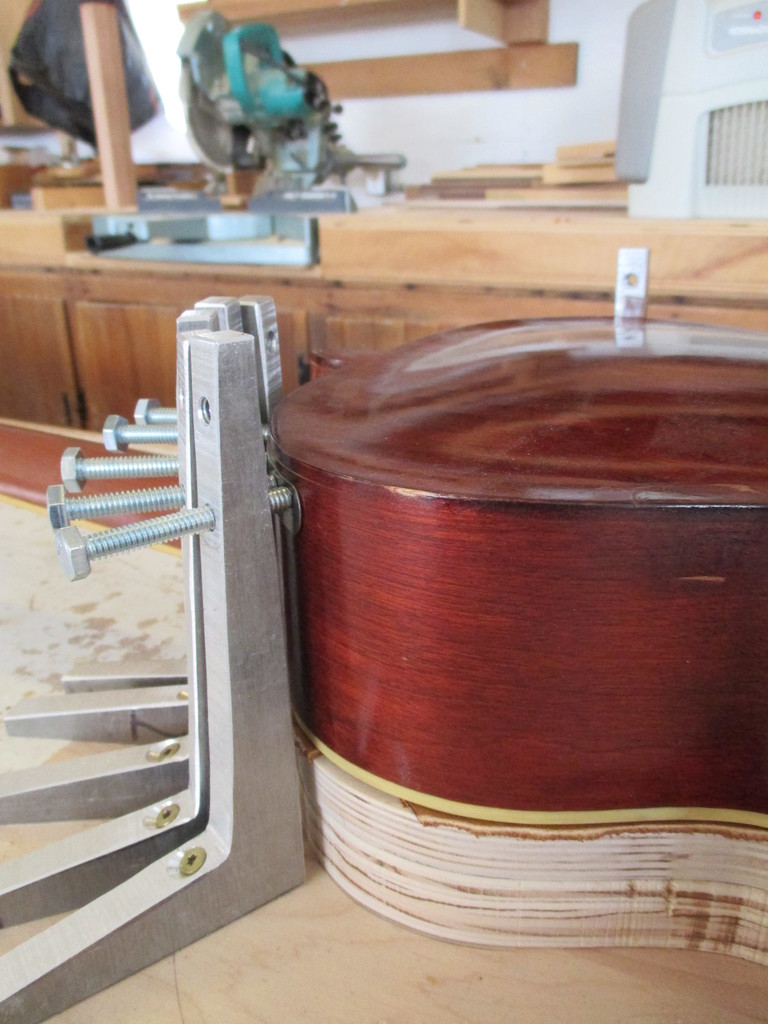 This is a 1914 Gibson L-1 archtop.  The sides have, in places, come loose from the back.  In one spot(the lower bout), the kerfing is still attached the back, but not the side.  The guitar is in the famous Frank Ford jig for realigning the sprung sides, and it works great. But...how the dickens to get the glue in there?  The back does not want to flex or bend up to allow glue insertion.  Hmmmmm....suggestions?

I use a length of 1/4" or 5/16"semi-rigid plastic tubing.  Sometimes I tape a wire to it so I can bend it into a shape that gets me to the spot I need to be at.  I then suck the glue into it like a straw.  I like this because I can still see what I am doing by not having to have my arm in the sound hole.  Lay the guitar in a way that the glue will run into the joint (maybe thin the glue a little).  When your where you want to be,  just blow through the tube and let the glue seep in the joint.  I have done this through f-holes as well with good results.  Hope this helps.

Your setup look good but I have a couple of suggestions for you.  One suggestion I have is to make a stiffer caul that is cut to follow the shape of the body. I've use this technique on mandolins and I found that a wider caul that was shaped to the back curve, with enough length to overhang the area that needs to be moved back into place, gave me a very good result. In the pictures you posted I can see that there is a portion of the side that still isn’t quite under the back edge so you have an exposed “white” edge just beyond the end of the steel caul.  The steel caul isn’t long enough but more than that, it’s also flexible which means that you will need more bracket clamps too. A longer, stiff caul should allow you to move this into place without using more clamps and make the glue up/ clamp up much easier.

While you’re at it, a wider caul will help insure that the side stays flat across it's width. It may not be an issue on a guitar but on the mandolins I’ve use this technique on this was definitely a problem.

Another suggestion I have is that you glue up any places that are pulling under the backs edge, leaving the back overhang before you glue up the protruding areas. My experience is that protruding sides often mean that some other areas are loose but pulled under the edge of the back because the side has been pulled flatter in that area, after all the side is still the same length and the protruding side has to come from somewhere. I think this is almost always true unless the protrusion has been caused by the back shrinking.  I’ve found that these “intrusions” ( for lack of a better word) are often harder to get into proper alignment than the protruding area because of the limitation on access. If you leave them for last, they will be MUCH harder to get back into place but if you do them with the protruding sides loose those areas can flex and give enough that they can often be pressed back into good alignment from the inside with little trouble. Sometimes they have to be worked in segments to get it all aligned because pushing one place out to aligh with the edge of the back will leave an area protruding next to it.

My personal opinion is that a Gibson of this vintage should be repair with hot hide glue. It was probably the original glue and using it will not only work much better on any old glue that still exists in the joint but it will prevent a "gotcha" waiting for anyone that might need to make any other repairs in the area down the road. Besides that, HHG tightens up when it dries.

When I've done a glue up like this, I needed a second set of hands to get it clamped up quickly enough. I strongly suggest that you warm up the back and sides in the area before applying the glue too and I used wax paper between things to keep from gluing stuff to the instrument in the rush.  Another reason to use HHG is that any excess glue you can’t reach because of the caul is relatively easy to clean up even after it’s dried.

The process I use is; Get the instrument well locked down and the clamps in place. I always clamp thing up completely without glue first then back the bolts off enough to get the caul out easily but not much more. If you wrap the caul in wax paper before you start applying glue it will help save time or have your second set of hands ready with the caul and the wax paper.

Apply the glue, set the caul and starting moving the side into place. Screw the bolts in evenly so you don’t end up with a “wave” at the end that won’t align correctly. This is where two sets of hands really come in handy since you can work multiple bolts at the same time. (Did I mention that a dry run also lets you figure out how to work in the same place at the same time and just who’s responsible for what?)  Clean up as much of the excess glue as you can without diluting the glue in the joint but don’t worry over much about excess under the wax paper.  The last step is to go away and let it dry without messing with it.

Applying the glue depends on the conditions of the joint.  Brushes can work but sometimes I use a flattened piece of tubing to blow glue into an area, like Mark said. Plastic straws that have been flattened can work but I also have some very thin walled brass tubing from a hobby shop that has been flattened to a very small, flat opening on one end. That one requires a syringe to push the glue out and the glue needs to be fairly thin even then. To get glue on the kerfing that’s still attached to the back, I’d try to use a brush if at all possible but you may just have to try spraying it on with a tube.  IF you are sure that every will come together tight, you can always let the glue run down the inside of the side when you appy it and trust that there will be enough to attach the kerfing to the side when the clamping is done. I haven’t tried this and I think it would require that glue to remain thicker to keep the glue from just running all over the place while leaving a glue starved joint.

Anyway, I’ve sort of gone on about this for a while but I hope I haven't confused thing too much and that this helps you understand what your about to do a bit better.

Permalink Reply by Dave Richard on February 27, 2015 at 4:09pm
Thanks for your replies and suggestions. I glued up one section today, using a longer, wider caul. I agree that hide glue would have been appropriate, but I did not feel I could make it work, even with heating the area, etc(and I use hot hide glue often). I used Titebond, and, with the guitar out of the jig, I spread the top away from the side, and injected(with a fine syringe) the glue into the seam and kerfing. It's clamped overnight. More later.