I need some new tang nippers for jumbo wire.

Anyone used the Summit ones from Jescar?

I have both the Summit  tang nippers and the end nippers ... I got them around a year ago  from Tonetechsupplies in the UK, and I cannot speak too highly of both these tools. If you are installing stainless frets they are indispensable IMO.

I got two votes for them now. I'm doing it.

Hi David... I bought a pair of their "straight overhang nippers" a few months ago.  They're wonderful for stainless refrets and are able to really get in close to the board, thanks to the overhead design.

So far I've done 5 or 6 stainless refrets with them and they show no signs of wear.  Pricey, yes... but one of those rare tools that actually seems to be worth the bucks. 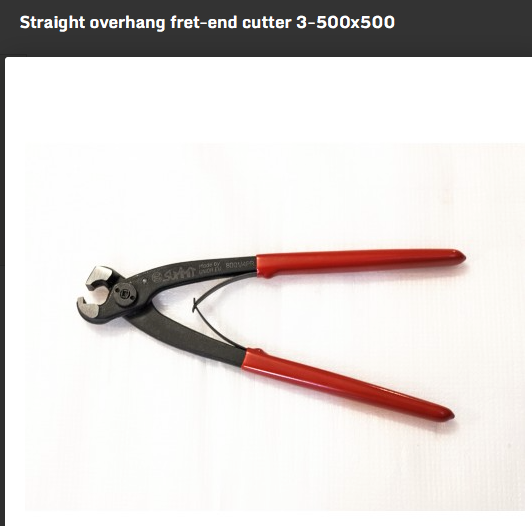 I have their offset cutters and they have held up well so far. They only have a few fret jobs in them.

I'll report back about the tang nippers after I use them so others can go to school on me.

I saw the Summit tools on the Jescar list of stuff back away, and so far they seem to attract good reviews all round.

On the subject of straight cutters,  we just started to use Fastcap nippers (from Philladelphia Luthier) which are cheap and cheerful for stainless steel and can get in over the body with plenty of clearance, imagery attached.

They are compound cutters and the edges take a beating but still cut well for a cheap tool - we cut jumbo stainless with them  and so far so good.   If you only do occasional stainless these are going to be OK.   They are cheap enough to amortize against the stainbless refret price and we expect to go through these tools - but they are cost effective at the PL price compared to other nippers.

Note: the Summit gear is obviously superior, I have offered this recommendation as a cheap alternative for those who need an cost effective alternative for occasional use.

It never sits well with me though.

I feel like I'm encouraging suppliers to make and sell poor quality products.

I'd rather bitch about poor quality stuff than buy it. :)

Greetings from The Motor City!

I don't mean to hijack this thread about the Summit tang nippers…but in reading the posts,the end/overhang nippers along with the Fastcap end nippers were mentioned, so I thought to chime in…;-)

The Summit end nippers…[which I've been contemplating getting] so…they cut from above & below the fret overhang as opposed to from the sides of the wire…?

How cleanly do they cut…do they leave a burr…?
In addition to the last two versions of SM's end nippers I have [which are pretty chipped up now after much use, so I have to strategically work around the bad spots], I recently got one of the Fastcap nippers from PL.

I DO like the smaller head size, it makes it easier to get to the upper frets…but I find that they don't really "cut" the wire, they have more like a "snap" to them, which took me a bit to get used to, as they have a bit of a recoil upon the "snap"…it initially caused me a few finish SNAFU's when trying to get in close to the fingerboard, so now I'll cut in two passes not getting so close on the first cut.

Back to the tang cutters…I guess I've been lucky, as I'm still using my original SM tang nippers from like 20 years ago…they're still working fine after all this time…:-)

I just ordered the Summit nippers with plates 1-4.  I'm hoping for better results and longevity than the old modified sheet metal nippers sold everywhere.  The choice of plates confused me at first so I asked Jill at Jescar about specific StewMac fretwires. Here's her response and a chart you might find helpful if you're as dumb as me (Height is tang measurement):

I didn't edit fast enough so much of my text was deleted:

I was initially told that the B measurement (height, tang length) was critical. The tool is said to be adjustable to 8.5mm (.335") which implied to me that any plate could be made to fit any height tang.

I've had mine for about 2 years now i'm very happy with results !

MIne arrived yesterday after being backordered for a month. They're well built but came without instructions. Took me a few minutes to figure out that the adjustability described on the Jescar site is for setting the amount the fretwire overhangs onto the binding; that is, the amount of horizontal tang cut.