I'm shaping and slotting my first nut. I'm a little surprised at the lack of string spacing resources out there. I love StewMac and I've spent a few hundred bucks there already but at $21, their "string spacing rule" seems ridiculously overpriced, especially for such simple info.

How do you guys tackle the string spacing thing when slotting a nut?

This guy has done all the calculations for us:

I'm a big fan of the StewMac string spacing ruler.... use it every day and it's more than paid-for itself.  To get the best out of it, buy yourself a .3mm mechanical pencil, since the standard sizes (.5 & .7) are just a tad too large to mark in the slots themselves.

I agree with Mike. The Stew-Mac rule will pay for itself the very first time you use it. It's true beauty lies in its ability to prevent spacing mistakes that have plagued the craft. It also cuts 'calculation time' from minutes to seconds.

If you plan on making additional nuts during your lifetime, it's an essential tool. The same scale/rule can be found from other sources if you search the web... usually for less $$ than SM charges.

Great advice too about the .03 mechanical pencil.

If I  had to buy it again, I think $50 would be a fair price for the time it saves and the consistent results it delivers.

"The same scale/rule can be found from other sources if you search the web... usually for less $$ than SM charges."

All I found was one on Amazon for $20.  I did find a bunch of inexpensive action gauges, however, on EBay.  Any other sources I missed?

Forgot to ask: are similar rules available for mandolin?

Larry...  the short answer is 'yes'. This blurb is from the StewMac website I think Frank's tool is terrific:

I haven't made one for myself (trying to locate a cheap jeweler's saw), but I use the basic idea of increasing the spacing by .10mm.

What I usually do is mark the two outer slots and file them. Then I measure the distance between them. Let's call that distance L. The idea is that the first string is an small distance (call it x) from the second. The the second string is x + .1mm from the third string, third is x + .2mm from the fourth, and so on. So really, you just need to find x, the distance between the E and B strings to figure how to lay out the spacing. We know L, so it's an easy equation. However, you have to remember to subtract the four inner strings' width from L. So let's say L = 35mm, and suppose the strings amount to 4mm (just making up a number). So you have a new distance that is 31mm. Then you equation looks like this:

Now remember that 6mm is from the edge of the E string to the edge of the B string. If you mark and then start filing, you'll have to figure out where the center is (you can also figure out an equation where you calculate the distances from center to center). To avoid that, I set my caliper to 6mm (or whatever distance), put it against the the string, and use the appropriate file to cut the next slot. It's similar to how Frank cuts a new notch in his ruler: 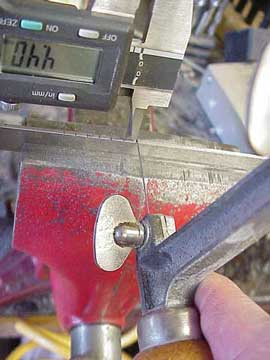 Quality specialized tools cost more upfront but they save money in the long run.  They are usually made in small batches and so costly to make. They are worth the money to pros because they increase precision, repeatability, and lower time on task.

That being said, StewMac had many products for which it is the sole supplier and gets some pricing perks.

If you interested in precision measuring, check out Frequently Bought Together group.

Frank posted that article a long time before the spacing rule was available. I made one per his spec's and used it religiously.

But, when the spacing rule became available, I got one and stopped using Frank's method and have never looked back.

IMO, the spacing rule is the best thing to happen to nut making since nut slotting files. The mere ergonomics of using it cannot be beat. Being made of spring steel is an additional perk. It's one of the most valuable devices on my bench.

Frank mentions being able to flip his ruler and mark it again if he wants even spacing on center.  Is anyone else doing this with the stewmac ruler?  Just curious.  I agree that $21 is a great deal for a proportionate nut spacing tool, but I prefer to make them even center to center in most cases.  Just wondering if anyone uses the stewmac ruler in this way and could offer opinions on accuracy and speed compared to traditional measuring and marking.

I have experimented with drawing the spacing as a CAD file, printing at 1:1 scale, attaching it to the top of the nut to be slotted with double sided tape and cutting through the tape and paper with a sharp knife.  The printer makes finer lines than I can make with a pencil and it works great providing you can line it up correctly on the tape.  But I can still mark it the old way faster than it takes for the cad program to boot, printer to warm up, walking back and forth, etc.